Breakfasts That May Help or Harm Your Longevity 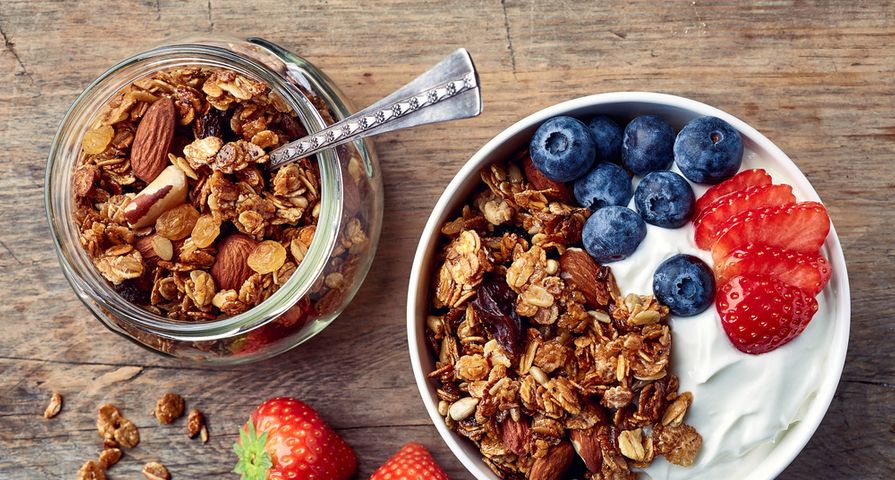 Some say breakfast is the most important meal of the day. After all, it can help set the tone for the rest of your day. WebMD says a nutritious breakfast can help kickstart your metabolism, give you energy, and improve concentration.

By the same token, an unhealthy breakfast can mess with your metabolism and make you feel sluggish. In fact, a recent study even found poor diets are responsible for more fatalities than any other health risk, including smoking. With this in mind, here are some breakfasts to dig into and others to avoid.

Breakfasts That May Help Your Longevity

First, let’s look at five breakfast ideas that can help start your day on a healthy note. As you may have noticed, certain breakfasts tend to be more satisfying and energizing than others. But did you know that some can even help you live a longer life?

As a matter of fact, some breakfast foods can help boost your immune system, decrease inflammation, and reduce the risk of certain diseases. Generally, breakfasts made up of plant-based foods are a great place to start. So, these choices work in fruits, vegetables, nuts, grains, and beans. 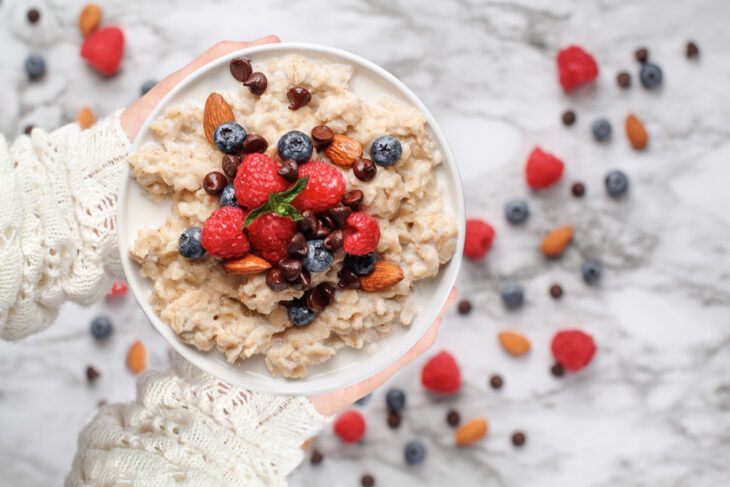 Eggs are so packed with nutrients that Healthline calls them a superfood. For one thing, they’re a great source of vitamins A, B12, D, E, and K. Eggs are also loaded with minerals and antioxidants like zinc, iron, and lutein.

Plus, eggs are an excellent source of protein, which helps make them so filling. Omelets are also a great way to incorporate vegetables such as broccoli and onions into your first meal of the day.

Broccoli has phytochemical sulforaphane, which research shows can help protect against inflammation related to heart disease. And then there are onions, which not only add flavor but also have organosulfur compounds. According to research, those can help prevent certain cancers. 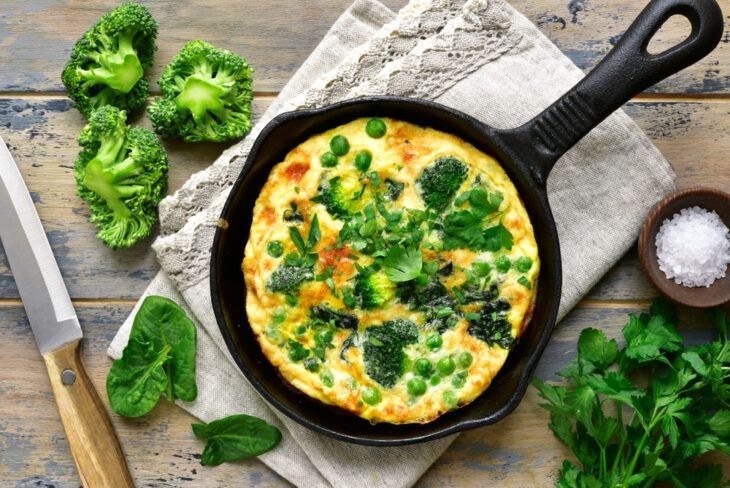 While beans on toast have yet to catch on in America, there are several health reasons to give this classic British breakfast a try. For example, a study of people over 70-years old found participants reduced their risk of fatality by 8-percent for every 2-tablespoons of beans they ate per day.

According to UC Davis Health, beans are also immune boosters that can help keep you healthy. The source attributes this to their high levels of zinc and protein. And consider choosing whole wheat bread instead of white bread for extra health benefits. 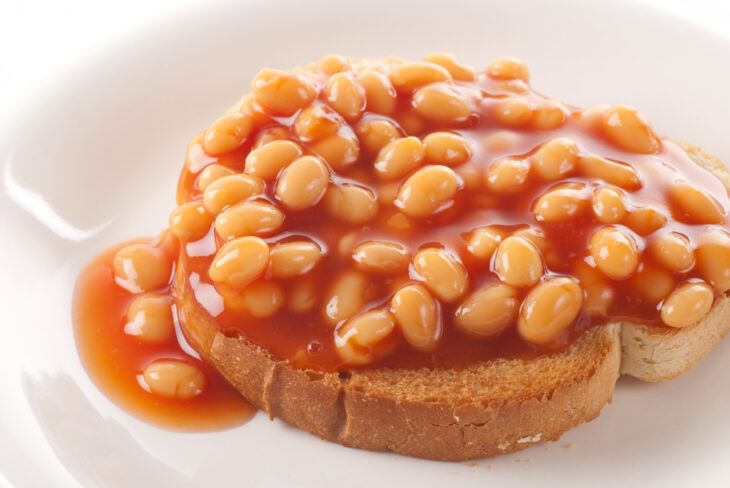 Oatmeal is practically the poster child of breakfast foods, and it turns out, the hearty staple does measure up. Oats are high in fiber, which a study found can reduce the risk of fatality from cardiovascular, infectious, and respiratory diseases.

Want to take your bowl of oatmeal to the next level? Give it a nutritional boost with healthy toppings like chia seeds and berries. For instance, Business Insider says chia seeds are packed with omega-3 fatty acids, which the source says can “reduce the risk of heart disease and stroke.” 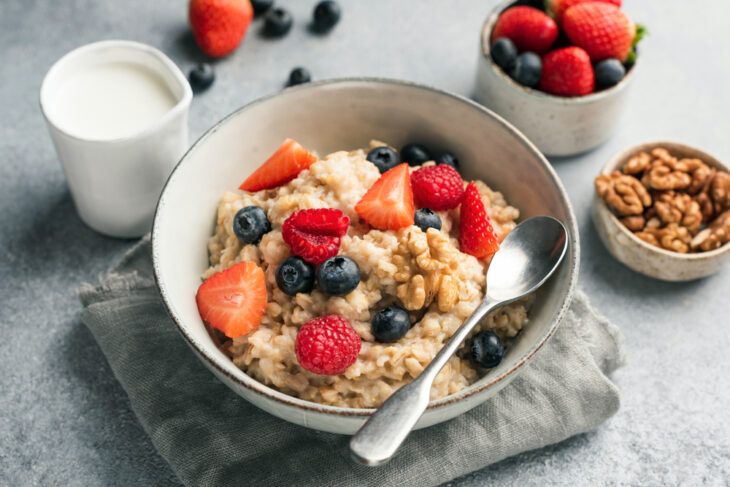 While cottage cheese might not be the first thing that comes to mind when you think breakfast, it’s a healthy and versatile choice. Not only is cottage cheese packed with protein, but WebMD says it’s also a great source of calcium, vitamin B12, phosphorus, and potassium.

Plus, research shows eating dairy products like cottage cheese can help manage blood glucose levels and lower the risk of type 2 diabetes. For breakfast, eat it in a bowl or spread it over toast. Either way, top it with apples — a study of older women found eating an apple a day lowered the risk of fatality by 35-percent. 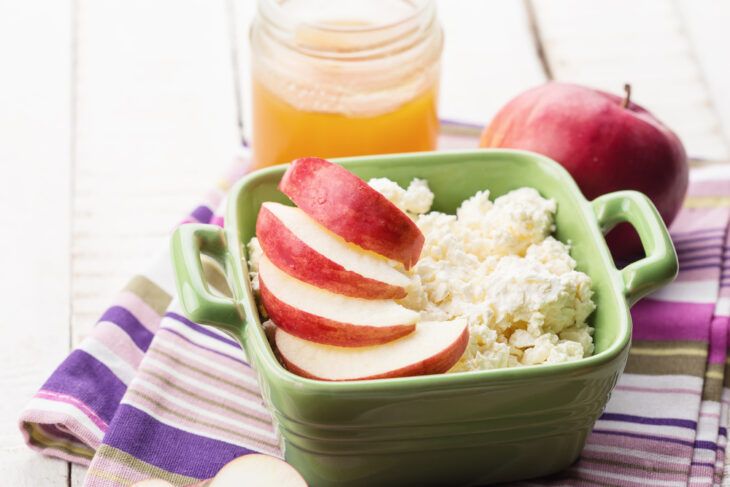 A yogurt parfait is another breakfast classic with noted health benefits. According to Healthline, Greek yogurt is high in protein, calcium, vitamin B12, and selenium. Certain Greek yogurts are also rich in probiotics, which can help with gut health.

Plus, a study that followed 180,000 people for 20 to 30-years found regularly eating yogurt can lower the risk of high blood pressure by 16-percent compared to eating it less than once a month. And like oatmeal, yogurt is an excellent base for nutritious toppings. So, turn it into a parfait with berries and nuts.

Since berries are antioxidant-rich foods, a study found regularly eating them may help reduce the risk of chronic disease. Similarly, another study found eating a handful of nuts daily can help increase longevity by reducing the risk of passing away from cancer or heart disease. 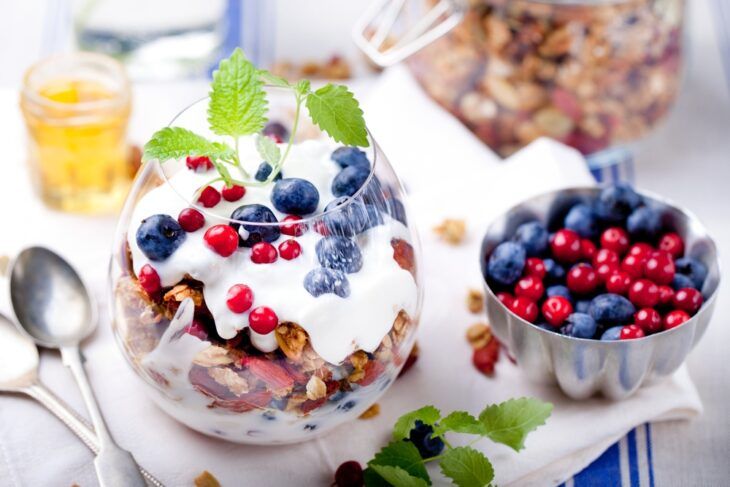 Breakfasts That May Harm Your Longevity

Now, let’s shift focus to common breakfasts that may lower your life expectancy. These five breakfast foods and drinks all have something in common: high levels of added sugar. High-sugar diets can lead to several health issues, including obesity, high blood pressure, and inflammation.

For instance, research shows high-sugar diets can increase the risk of passing away from heart disease. In fact, the study found the odds of fatality “rose in tandem with the percentage of sugar in the diet.” Given that, here are five breakfasts to avoid. 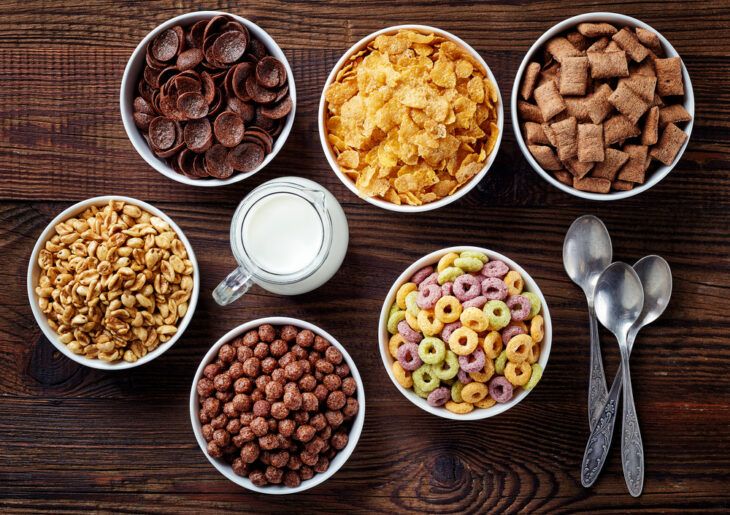 While breakfast bars may be a quick and easy breakfast, they often aren’t an adequate replacement for a nutritious meal. Whether you reach for granola bars, cereal bars, or energy bars, you’ll want to read the label to see how much sugar it contains.

Some breakfast bars are decent sources of fiber and protein, but Healthline says “some contain as much sugar, carbs, and calories as candy bars.” To make matters worse, the source says many breakfast bars are also highly processed. 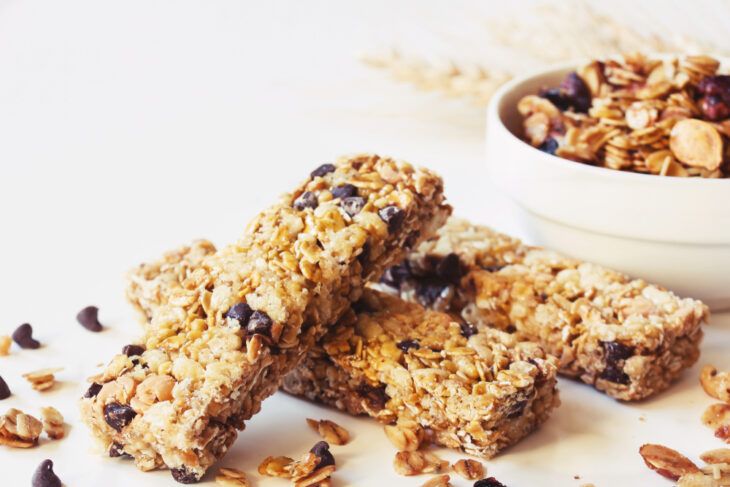 Don’t be fooled into thinking fruit juice is a good alternative to eating a piece of fruit. Unfortunately, many fruit juices are loaded with sugar. For instance, take Welch’s 100-Percent Grape Juice. Eat This, Not That! says it has 36-grams of sugar. That’s the same amount of sugar as two Hostess Ding Dongs, according to WebMD. 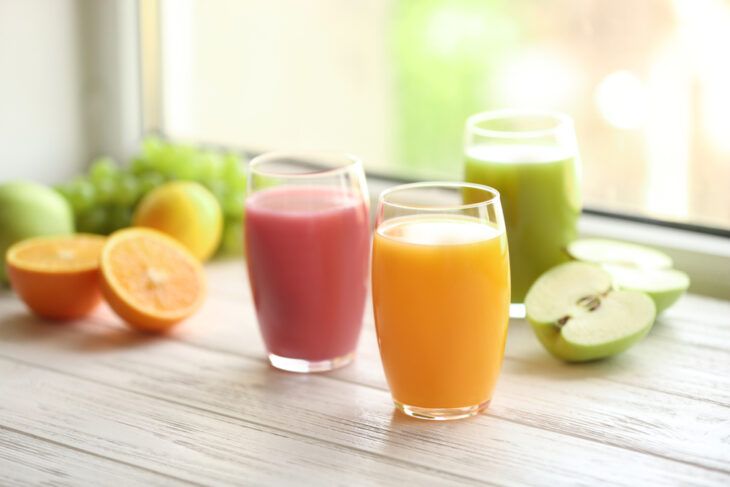 Donuts, cinnamon rolls, and croissants might be breakfast classics, but there are several reasons to skip them. In addition to sugar, Healthline says pastries and other baked goods are loaded with fat and calories. The source also says they’re generally low in protein and fiber.

Even bagels, which might seem like better choices than donuts, are incredibly high in calories. According to WebMD, the average bagel has about 350-calories and more than 50-grams of carbohydrates. The source says two slices of white bread have about 30-grams by comparison. 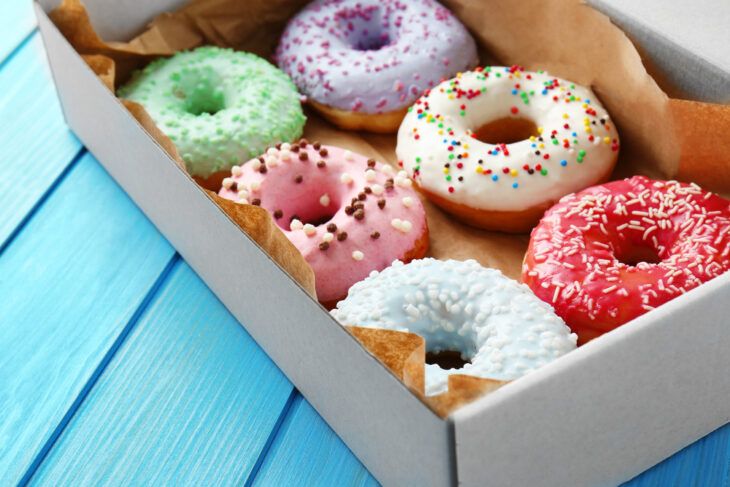 Breakfast cereal is another staple that tends to be chock-full of sugar. Like breakfast pastries and baked goods, many cereal options should really be considered more of a dessert than a breakfast. According to Business Insider, the average bowl of cereal contains about 20-grams of sugar.

Of course, some cereals are healthier than others. So, be sure to read the label to choose a healthy breakfast cereal. For one thing, look for options with less than 6-grams of added sugar per serving. Also, consider cereals high in fiber and protein. 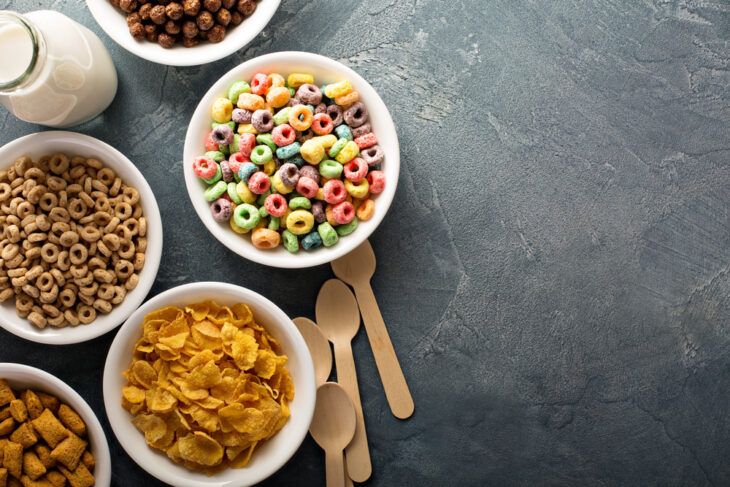 If your morning routine includes a fancy latte or mocha, then you might want to switch to drip coffee. Action on Sugar, a health advocacy group, found that 35-percent of hot flavored drinks at coffee shop chains have the same amount or more sugar than a can of Coca-Cola.

However, coffee without sugar or cream is fine in moderation. In fact, Healthline says coffee may be linked to a lower risk of type 2 diabetes, Alzheimer’s disease, and Parkinson’s disease. The source says some studies even found drinking coffee can lower the risk of fatality. 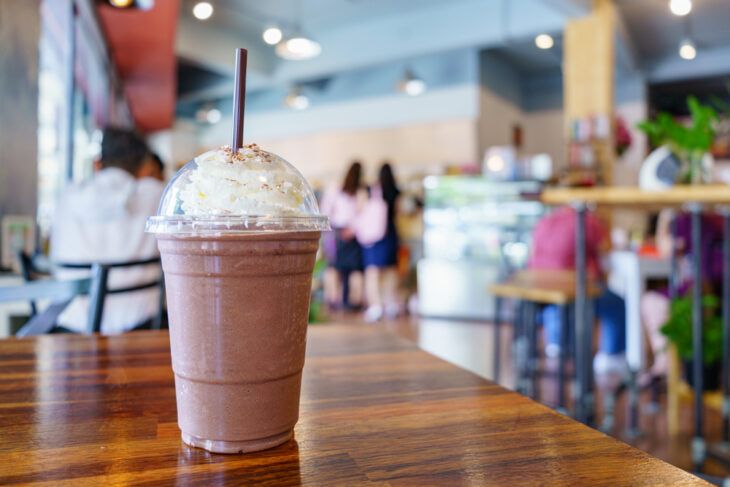