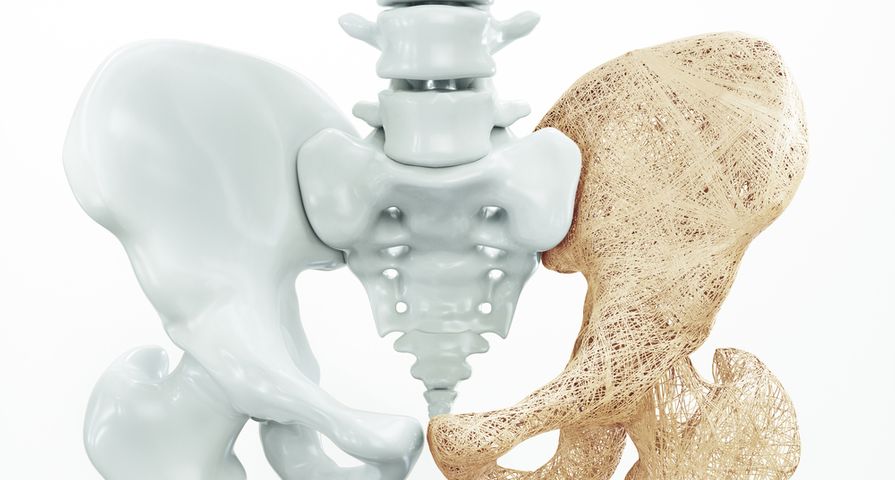 We all know about the importance of calcium for strong bones and teeth, but the nutrient is also vital for the proper functioning of your heart and muscles. Unfortunately, a calcium deficiency is quite common. In fact, University Health News says, “…most Americans don’t meet the current recommendations for adequate calcium intake…”

If you don’t get a sufficient amount of it—whether through dietary sources or supplements—you may be at greater risk of developing conditions like osteoporosis and osteopenia, along with some or all of the following 12 symptoms.

Early on, when a calcium deficiency is mild, a warning sign to look out for is numbness or tingling that occurs on the face (particularly around the mouth), hands, or feet.

Livestrong.com explains that this happens because “When deficient in calcium, muscles, and nerves become abnormally excitable — known as neuromuscular irritability.” Although this symptom presents itself early on, it is considered to be serious, so if you experience numbness and tingling be sure to report it to your physician.

As previously mentioned, a deficiency in calcium can make the muscles more sensitive than normal. This tends to occur when the deficiency is more severe and can cause symptoms like muscle cramps, twitches, and spasms—known as tetany.

Muscle pain is also common. MedicalNewsToday.com indicates, “People tend to feel pain in the thighs and arms, particularly the underarms, when walking and otherwise moving.” Another symptom, called the Trousseau sign, “is present in 94 percent of people with low blood levels of calcium,” says Livestrong.com. To test for it, a blood pressure cuff is placed on the arm and inflated in order to restrict blood flow to the hand. If the Trousseau sign is present, then the test will cause the person’s hand to twitch.

When the body is deficient in calcium for a prolonged period of time, other areas of the body may start to be affected. One such area is the nails, which can become dry, brittle, and break easily.

You may also notice changes in your hair. For instance, it may start growing slower than normal, or it may even fall out—often in distinct round patches, a condition that is known as alopecia.

Your nails aren’t the only part of your body that can become weak and brittle when you have a calcium deficiency. As mentioned earlier, calcium is essential to the strength of your bones, so if you’re not getting enough of the mineral they may be susceptible to easy fracturing.

MedicalNewsToday.com explains that this is because bones “require high levels [of calcium] to stay strong. When overall levels of calcium are low, the body can divert it from the bones, making them brittle and prone to injury.”

As just discussed, when the body is low on calcium it draws stores from the bones—including your teeth. As a result, a deficiency in the nutrient can lead to a number of dental problems, including cavities, brittle teeth, sensitive gums, and weak roots.

These problems are especially common in women who are pregnant as well as young children. It’s important to note, however, that such dental issues can also result due to poor oral hygiene, so they may not always indicate inadequate calcium levels. Be sure to visit your dentist to confirm the underlying cause.

Being deficient in calcium can take a serious toll on your body, often leaving you feeling fatigued and lethargic. Inadequate calcium intake can also cause sleep problems, like insomnia, which can then lead to symptoms like sleepiness, sluggishness, and a lack of energy.

MedicalNewsToday.com adds, “Fatigue associated with calcium deficiency can also cause lightheadedness, dizziness, and brain fog, which involves lack of focus, forgetfulness, and confusion.”

Insufficient calcium intake can also have grave consequences on the heart. Most commonly, it affects the heart’s rhythm by causing abnormalities to its electrical conduction system, “which sends signals to the heart muscles so they can pump blood to the rest of the body,” explains Livestrong.com.

This can potentially cause symptoms like fainting, an accelerated heart rate, or feeling like your heart is skipping beats.

What’s even more serious than an abnormal heart rhythm, is that a calcium deficiency can cause the heart to fail completely. Livestrong.com explains that this is because inadequate levels of the mineral can “impair the ability of the heart muscles to contract and pump blood.”

Symptoms of heart failure to look out for include shortness of breath, low blood pressure, and swollen legs (edema). If you should experience any or all of them, be sure to seek immediate medical attention.

If a calcium deficiency happens rapidly, it may result in a person experiencing seizures. If this occurs, it’s important to call 911 as seizures are a medical emergency.

A less obvious sign of a calcium deficiency, though, is headaches. Headaches tend to form when the deficiency is prolonged over an extended period of time and result due to increased pressure in the head.

As just mentioned, a calcium deficiency can cause issues within the nervous system, such as increased pressure in the head. This pressure may result in swelling of the nerves that connect between the brain and the eye, known as the optic nerve.

This can lead to “blurry or double vision or loss of peripheral vision,” says Livestrong.com. The source adds that the development of cataracts may also contribute to blurry vision.

In addition to the nails and hair, as discussed earlier, a chronic calcium deficiency can also lead to problems with the skin. Most notably, the skin can become dry and itchy, even to the point where eczema or psoriasis may develop.

With eczema, common symptoms include redness, itchiness, and blisters. Fortunately, it is a treatable condition. Whereas psoriasis—which is marked by red patches of skin covered in silvery scales—is a manageable condition, but at this time no cure has been discovered.

Women with a calcium deficiency may also notice that, prior to getting their period each month, that they experience painful premenstrual syndrome (PMS). MedicalNewsToday.com indicates that this is because “Low calcium levels have been linked to severe PMS.”

Recent studies have found that boosting calcium intake, whether through food or supplements, not only helps to improve PMS symptoms, but also increases appetite, and decreases feelings of depression and fatigue.