Signs of Lung Cancer You Should Never Ignore 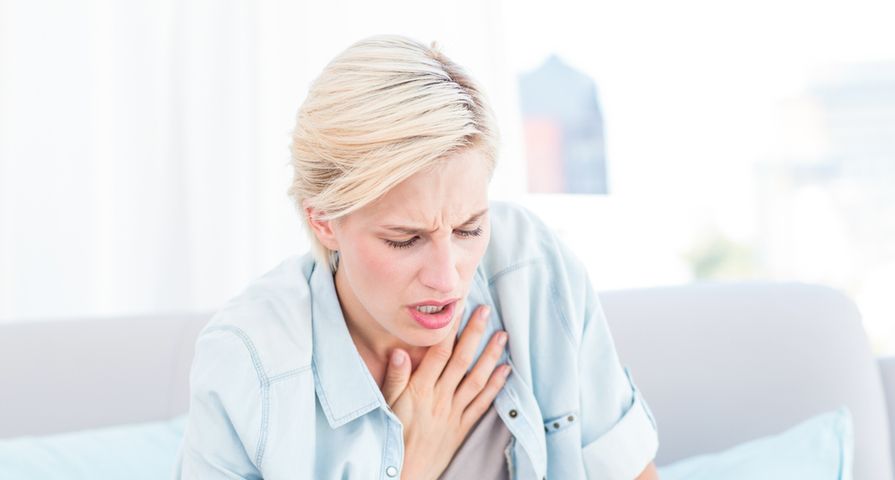 Lung cancer is one of the most common types of cancers, with more than 228,000-cases expected in 2020 in the U.S. Of that estimated number, more than 135,000-fatalities are expected, which is the highest number among the cancers in the country.

With any type of cancer, early detection and treatment are important to improve the outcome. However, while you might think you know all of the symptoms of lung cancer, there are others that aren’t as well-known that might not prompt a visit to the doctor. However, if you’re experiencing any of these signs, it may be best to play it safe and see a physician…

Chest pain is often stereotypical of a heart attack, which can actually present in a number of ways. However, lingering chest pain can also indicate the presence of lung cancer, says Reader’s Digest.

Along with new-onset chest pain that doesn’t seem to be letting up, attention also should be paid to pains popping up in the back and shoulders. The pain can present as tightness or a sharp pain that’s worse when you breathe deeply or cough, it adds. The pain will radiate from where the tumor is located. Whatever the case, you should call your doctor for an evaluation.

A Cough That Won’t Go Away

This might be the most recognized sign of lung cancer, and for good reason. Prevention says that most people with lung cancer have a lingering cough, and “thick, rust-colored mucus” from coughing can also be an early clue of the presence of this menacing disease.

The source says if the cough keeps going and gets worse over time, it can be a major “red flag” that you might be dealing with lung cancer. You don’t have to be coughing up any mucus discharge to be at risk, if you have a dry cough for more than 1-month, get checked out.

Of the lesser-known symptoms, WebMD lists “fatter fingertips” as one of the possible signs of lung cancer. The reason, explains the source, is the production of “hormone-like chemicals” by the lung tumor that pushes more fluids into your fingertips.

It says the enlarged size can also be accompanied by shiny skin next to the fingernails, or nails that curve more than usual. In fact, it says this symptom is a strong indicator of lung cancer as about 80-percent of patients with clubbed fingers also have this type of cancer.

The University of Texas MD Anderson Center explains that getting a diagnosis of asthma after the age of 30 could be a red flag for lung cancer. A doctor might mistake your wheezing for asthma and make that diagnosis, but it’s probably not accurate, adds the source.

If you’re over 30-years old and your doctor has recently diagnosed your symptoms as asthma, you should seek a second opinion. Meanwhile, asthma in kids is quite common, with 1 in 12 children known to have it in 2017, according to the Asthma and Allergy Foundation of America. The same source says more than 7.7-percent of adults have asthma, and that it’s more common in women.

If climbing the stairs or running for the bus leaves you breathless, you might be out of shape. But you might also be showing signs of lung cancer, says Reader’s Digest. That’s because a tumor might be obstructing the windpipe, or it could be fluid in the chest that’s reducing lung capacity.

The source says cancer that develops in the lining of the lung causes this fluid buildup, causing it to flow over the gallon or so capacity of the chest and preventing enough air from filling your lungs. You may also have trouble getting enough air even when you’re relaxing. (For more information here are the top Medical Causes for Shortness of Breath).

While cancer might be lurking in your lungs, your stomach might be an organ that warns you of its presence, says WebMD. That’s because up to 20-percent or so of people with cancer can develop higher calcium levels, which is medically known as hypercalcemia.

The result, it says, is that you can feel nauseous, experience stomach aches, and have constipation. It adds that while your appetite might be suppressed as a result, you can feel very thirsty. The cramps and sick feeling could also be from the kidneys being affected by a hormone that some tumors produce.

Surprisingly, these high calcium levels due to cancer that we mentioned can also cause “confusion, muddled thinking, and depression,” adds WebMD. Those who have seen a mental health professional for the first time in the past year are more probable to have small-cell lung cancer according to a study, adds the source.

Aside from being affected by unusual calcium levels, those who have seen a doctor for depression, anxiety, and even dementia might be experiencing issues with their immune system or hormones as a result of cancer, which can spread to the brain. Another study notes that treating depressive symptoms may improve outcomes for cancer patients.

The University of Texas MD Anderson Center notes that cancerous tumors can eat up calories at a rate that increases with their size. At the same time, the tumors can release chemicals that reduce your desire to eat.

Meanwhile, LungCancer.net says that the loss of appetite (known as anorexia) is often accompanied by weakness from malnutrition (referred to medically as cachexia). Both of them comprise the cancer anorexia-cachexia syndrome (CACS), which can further complicate the disease. About half of lung cancer patients experience this syndrome. (Here are some more Health Conditions Linked to Weight Loss).

While you may feel weak from malnutrition (as explained previously), you might also just feel so fatigued that you “can’t wait to climb into bed,” says Prevention. However, the other problem is that if cancer is the cause you won’t feel much better after getting rest.

The source says up to 80-percent of cancer patients report “excessive tiredness” as a symptom. It does point out that there are several reasons you could be experiencing fatigue, so it’s best to let a physician sort it out before jumping to conclusions.

While the eyes may be the windows to your soul, they may also give a glimpse of a health problem including lung cancer. According to WebMD, a Pancoast tumor (located at the top end of either lung) can cause Horner syndrome, which is defined by a smaller pupil in one eye and a drooping eyelid. It also prevents sweat from forming on the affected side.

WebMD says that small-cell lung cancer, which according to Cancer.org makes up about 15-percent of cases and tends to spread quicker than non-small cell lung cancer, can trigger the immune system to attack the nervous system, which can lead to difficulties with your vision.

Prevention notes that you may experience swelling in your neck and face if there’s a lung tumor pressing against a major vein (i.e., the superior vena cava) returning blood to the heart from the head and arms.

You may also experience swelling in the arms and upper chest. However, edema, the medical term for swelling, can be caused by cancer treatment (chemotherapy) and a wide variety of other things according to Cancer.gov.