Signs and Risk Factors of Asthma 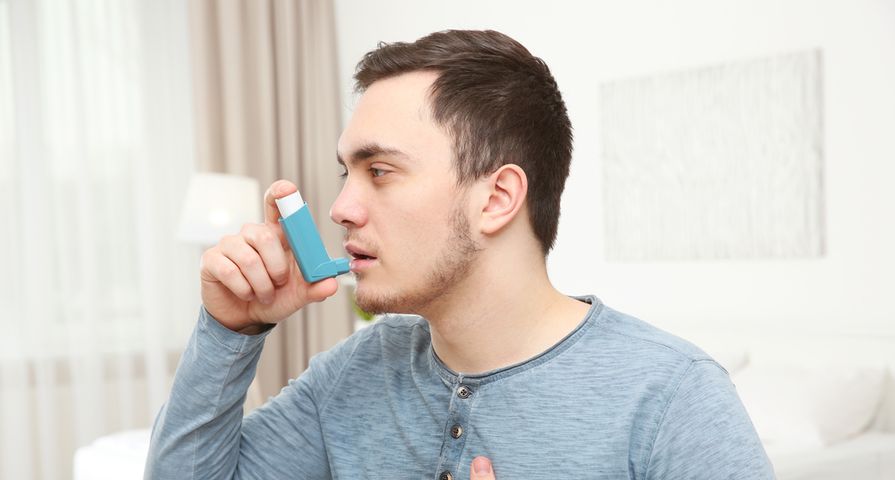 Asthma is a common condition, but it should still be taken seriously, as it can lead to death in some unfortunate cases. The best line of defense is knowing you have it, then getting the proper treatment from your doctor, which is usually an inhaler to open up the constricted lung passages. It’s also beneficial to recognize specific triggers like tobacco smoke, dust mites, or mold, in order to manage symptoms and keep them from getting worse.

Here are 12 signs you may have asthma…

Health.com says that feeling chronically fatigued is a “byproduct” of asthma, meaning that the other symptoms, such as coughing (which we’ll get to), can tire you out. Also, the source adds you may be experiencing symptoms at night, which could lower your quality of sleep.

“When the airways become narrow, it makes the patient work a little harder to breathe on a more constant basis,” notes the source. You may not think of this as extra physical activity, but it can take its toll. Fatigue can be a sign of many conditions, so it’s best to let your doctor sort it out.

Yawning can be a reflex of sitting in a boring business meeting, or it could be a sign that your body is trying to get more oxygen into the blood through the lungs while dispelling carbon dioxide, notes Reader’s Digest.

The source notes that yawning, taking deep breaths and sighing often “don’t necessarily mean you’re suffering from world-weariness—they may, in fact, be symptoms of asthma.” The source adds these behaviors are often an “unconscious effort to remedy the imbalances caused by constricted airways.” If you’re not sleeping well at night due to asthma, the reason could be that you are yawning more often.

WebMD says that a dry, “non-productive cough” that does not expel any mucus from the airways can be a sign of cough-variant asthma. This type of asthma often doesn’t have the other symptoms of “classic” asthma, such as shortness of breath or wheezing, it adds.

Cough variant asthma may give rise to a chronic cough if it has persisted for 6 to 8 weeks, says the source. If you have this type, you’ll probably also notice that you’ll cough more when you physically exert yourself; are exposed to allergy triggers such as dust; or when your lungs are exposed to cold air.

This can be a sign of many medical problems, including a heart attack, but another problem is asthma, according to Reader’s Digest. “When the muscles around your airways constrict, your chest may become tight,” it explains.

The source points to a study of 100-asthma patients (with an average age of 45) that were admitted to the hospital, 78-percent had chest pain worsened by coughing or inhaling, leading them to believe they were having heart troubles and not an asthma attack. This is not to say that an asthma attack can’t be a medical emergency on its own. Regardless, the emergency room (ER) physicians can sort it out and administer the right treatments.

Reader’s Digest says you may not have any symptoms of asthma until you’re in your mid-40’s – “The peak years for the onset of asthma in adulthood are between 45 and 50,” it adds.

If you already have allergies or had symptoms as a kid but you “outgrew” them, then you’re at higher risk of developing the condition. Many cases will begin after a respiratory infection, such as a cold.

You Have Other Conditions

Asthma.ca notes that a common marker of asthma is not only difficulty breathing, but also having certain other respiratory or skin conditions.

For example, the source notes that you’re more likely to have asthma if you (or a close relative) have chronic inflammation of the nose, called allergic rhinitis. You or a family member may also have experienced the dry, itchy, scaly skin associated with eczema. Asthma can also be more prominent in people with other allergies, which we’ll get to next.

What you may think of as just a simple allergy to cats may actually be a trigger for asthma. We shouldn’t single out just cats, Asthma.org.uk says that dogs and horses can also be triggers for asthma.

Why do these cute animals aggravate asthma, you ask? Unfortunately, the proteins found in flakes of the skin of these animals (also known as dander) can cause asthma symptoms in some people, while others won’t be bothered by them at all, says the source. Allergic people will get the classic symptoms of red, watery eyes and sneezing, but will also have difficulty breathing in the case of allergy-induced asthma, it adds.

Bluish Tinge to the Lips or Skin

This can be a pretty alarming symptom, which is medically known as cyanosis, and it means you’re not getting enough oxygen, explains Health.com. “What that’s saying is your asthma is so severe, you’re not only having trouble getting air in and out but also your oxygen is dropping,”  notes the source.

If you have mild or even moderate asthma, you probably won’t have this symptom. This is a sign your asthma is out of control and you need to seek assistance from a doctor, warns the source. It can also be a sign of other serious ailments, such as pneumonia, so your physician should be able to diagnose the problem if necessary.

If you find your breathing speeding up and you can’t seem to get air deep into your lungs, then you might be experiencing the symptoms of asthma, explains Reader’s Digest. “Use of the muscles at the base of the neck and between the ribs may be more exaggerated than normal,” it adds.

The source also adds that the normal breathing rate for adults is around 12 to 20 breaths per minute – and hyperventilation is defined as 30 breaths per minute or faster. This can be brought on by exercise or other factors, but if you find yourself gasping for air, seek medical help.

Hearing someone wheeze, especially a young person, can be quite alarming. The National Asthma Council in Australia says this occurs when the small airways in the lungs become constricted, causing a “whistling sound” when exhaling.

This could also mean that the person is experiencing labored breathing as a result (although the source says asthma isn’t the only cause of wheezing). For example, it says infants and toddlers may wheeze, but it doesn’t mean they have asthma. “Wheezing is more likely to be related to asthma if a child has both persistent wheezing and allergies,” it adds.

When to Consult a Doctor

It can be beneficial to see a physician if you have any of the telltale signs, rather than letting a team in an ER figure it out. Health.com says wheezing may drive some people to seek medical attention the first time they experience it, because it’s “not normal.”

If you already have been diagnosed, then you’ll likely have a plan in place to manage the asthma. But, if those approaches don’t calm your symptoms, then it’s time to visit the ER. “In general, if your symptoms suddenly get worse, your medications aren’t helping, or you can’t catch your breath (even when you’re resting), find medical help,” says the source.

Inhalers Will Work if It’s Asthma

If you have asthma, then you’ll know the first time you use an inhaler. These types of inhalers (the most common being the beta-agonist bronchodilator albuterol) provide relief from wheezing, coughing, and even chest tightness due to asthma.