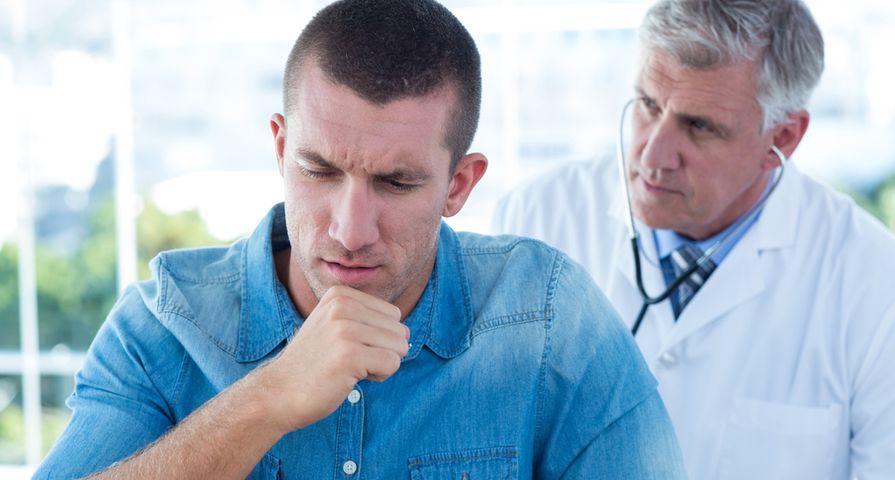 Having a cough isn’t that unusual, it’s something we all develop as the seasons change or if we’re getting a little sick. In these cases, the best form of treatment is letting it subside on its own. But what happens if it never goes away? A cough in itself is terrible, but one that goes on and on is not only uncomfortable, it’s also incredibly frustrating! The Lung Association says that a chronic cough isn’t a condition in itself, rather it’s a sign that something else is going on.

If you’re experiencing a cough that just won’t quit, read this article and find out all the different things that could be causing it and how to treat it…

What is a Chronic Cough?

We’ve all experienced a cough before, it usually comes along with common ailments like a sore throat, a cold, or even the flu. While a nagging cough is annoying, it usually subsides after our health returns. However, a chronic cough is defined by Harvard Medical School as a cough that lingers for more than three to eight weeks. In some instances, it could last months or even years! Unfortunately, the source says it’s quite common and while the reason behind the cough is usually the main focus, it can have some pretty frustrating side effects.

Even though a cough isn’t necessarily painful or debilitating, it can have a huge impact especially if it never seems to go away. It causes frustration, anxiety, and can affect a person’s sleep which makes them feel fatigued all the time. This in itself can have a huge impact on a person’s daily life. Harvard Medical School also notes that there can be some physical side effects to a chronic cough like urinary incontinence, fainting, and in severe cases, it can result in some broken ribs.

While it might seem pretty self-explanatory, a chronic cough causes…well, coughing! There can be other symptoms depending on what is causing the cough in the first place. Healthline lists several common symptoms including “a feeling of liquid dripping down the back of the throat, heartburn, hoarse voice, runny nose, sore throat, wheezing, stuffed nose, and shortness of breath.” Some less common symptoms are sleep loss, urine leakage, dizziness, fainting, headaches, chest discomfort, and even anxiety.

In more serious cases a chronic cough can cause a patient to cough up blood, high fever, night sweats, unintentional weight loss, or persistent chest pain. If any of these symptoms happen to you, seek medical attention.

There are many different causes for a chronic cough, but some of the most common are among the following. First up, the post nasal drip. You’ve probably heard this term before because it’s a pretty common problem for many people, especially during the cold and flu season. It happens when the nose or sinuses produce too much mucus and it drips down the back of the throat. This sensation triggers the cough reflex. According to the Mayo Clinic, when this happens it’s referred to as upper airway cough syndrome (UACS). It’s nothing too serious to worry about. WebMD points out that the glands in our body (nose, throat, airways, stomach, and intestinal tract) are constantly producing mucus, and the nose accounts for about a quarter of that production.

While it’s nothing out of the ordinary, when it results in a chronic cough it’s not a nice thing to deal with. A post nasal drip can be caused by several different things like a cold, the flu, allergies, sinus infection, pregnancy, medication, changing weather, certain foods, etc. The treatment for it differs depending on what’s causing it. Obviously, if it’s caused by an infection the best route of treatment is antibiotics, but antihistamines and decongestants can sometimes help as well.

Asthma typically causes wheezing, but it can also result in chronic coughing, especially if the patient is suffering from cough-variant asthma. “In cough-variant asthma, coughing is the only symptom. It sounds exotic, but it’s far from rare. In fact, asthma accounts for about one-quarter of all chronic coughs,” says Health Harvard. “In most cases, cough-variant asthma produces a persistent, dry cough that occurs around the clock but may begin at night. Exposure to allergens, dust, or cold air often triggers coughing, as does exercise.”

Similar to regular asthma, cough-variant asthma can be brought on by certain triggers. According to Self magazine, these triggers can be things like perfume, stress, exercise, air pollution, pet dander, pollen, dust mold, or even just cold air. This type of asthma can even come and go with the seasons.

Gastroesophageal reflux disease which is also referred to as GERD occurs when stomach acid flows up into the esophagus which can be extremely uncomfortable. It’s not an uncommon problem that is most often associated with heartburn, but when the esophagus is irritated enough it can result in an ongoing cough. “The skin lining of the esophagus is used to at least some degree of acid exposure as the result of being near the stomach, [but] the skin lining of the throat rarely sees acid reflux,” says Joseph DePietro, M.D., an otolaryngologist with ENT and Allergy Associates in Sleepy Hollow, New York to Self magazine. Because stomach acid is so strong and isn’t meant to leave the stomach, if it makes contact, it can irritate the nerves in the lower esophagus which triggers a coughing reflex.

To make matters worse, chronic coughing can make the GERD even worse! Luckily it can be managed with lifestyle changes or over-the-counter medication.

Infections in the upper respiratory tract, like pneumonia, flu, or the common cold can cause a cough to linger for a few days. If a chronic cough is a result of a respiratory infection it will likely come with other symptoms like a sore throat, hoarseness, wheezing, heartburn, or a sour taste in your mouth. What isn’t normal is if you’re coughing up blood or sputum which is a mix of mucus and saliva. “Along with having a fever, struggling to breathe, and wheezing, this can all signal a dangerous respiratory infection,” says Self magazine.

Alex Li, M.D., deputy chief medical officer for LA Care Health Plan told the same source that if you’re a smoker and you find yourself suffering from a bad chronic cough, it’s not a bad idea to visit your doctor and have them check on the state of your lungs. You should also note how bad the symptoms are like if it’s keeping you up at night or affecting your ability to function daily.

Blood pressure drugs have been known to cause a chronic cough in some cases, especially ACE inhibitors. While they are a popular choice for prescription by doctors because they are so effective, they do have some known side effects — the most common being a cough. “It occurs in up to 20-percent of people taking an ACE inhibitor. The first symptom is often just a throat tickle, followed by a dry cough that can begin as soon as three weeks or as late as one year after the medication is started. Once the cough starts, it lingers and lingers,” says Health Harvard.

The source goes on to say that if the cough is mild, patients might continue to take their prescribed medication, but if it’s severe they might want to switch to another antihypertensive medication. Thankfully there are several options including angiotensin-receptor blockers (ARBs) like losartan (Cozaar) and valsartan (Diovan).

Chronic bronchitis is a nasty cough that results from long-term inflammation in the bronchial tubes. A person suffering from chronic bronchitis will typically cough up colored sputum. This is an illness that typically occurs in people who used to or currently do smoke. “Chronic bronchitis is usually part of the spectrum of a smoking-related lung disease called chronic obstructive pulmonary disease (COPD). Emphysema is also incorporated under this term, and chronic bronchitis and emphysema often coexist in current or former smokers with COPD,” writes Mayo Clinic.

Other common infections like acute bronchitis and pneumonia can cause a chronic cough, in addition to less common infections like pertussis (whooping cough), bronchiolitis which is an “infection and inflammation of the bronchioles, the tiny air passages in the lungs,” writes Healthline. As well as bronchiectasis, “which is damage to the airways that causes the bronchial walls in the lungs to become inflamed and thickened.”

Smoking is obviously the most common cause of a chronic cough, and for those who don’t smoke, it’s typically due to either post nasal drip, asthma, gastroesophageal reflux disease, chronic bronchitis, or ACE inhibitors. Of course, there are always exceptions. Health Harvard says nine out of 10 coughs are due to the previously listed causes, but that other small percentages could be due to less common causes are lung infections or lung disease, heart failure, or even cancer. There’s also sarcoidosis, “which consists of clusters of inflamed cells, known as granulomas, that form in the lungs and other parts of the body,” says Healthline. As well as cystic fibrosis, an inherited condition that causes thick secretions that can damage the lungs and other organs.

Environmental irritants like sulfur dioxide or nitric oxide, dust, or mold could be responsible, as well as stress. Sometimes mental ailments can cause physical symptoms.

The Mayo Clinic points out that women are at a higher risk because they tend to have more sensitive cough reflexes.

Potential Complications and When to See a Doctor

Anyone who’s had a cough for over eight weeks should go see a doctor. Healthline outlines all the things a doctor will ask about or be looking for, so pay attention to any important details associated with the cough like whether or not you’ve experienced other symptoms like unintentional weight loss, fever, coughing up blood, or if it’s been so bad that it has affected your sleep. If there are no obvious reasons behind the cough, a proper diagnosis might require further testing like acid reflux tests, endoscopy, sputum cultures, a pulmonary function test to see how the lungs are functioning, an x-ray or CT scan to check for signs of an infection or cancer. If these don’t turn anything up, there’s also a bronchoscopy or rhinoscopy.

While a chronic cough can be painful and irritating as it results in a lack of sleep and a sore throat, there are also some more serious complications that can arise. The Mayo Clinic lists “headache, dizziness, excessive sweating, urinary incontinence, fractured ribs, and passing out” as some of the other problems associated with a chronic cough.

Not surprisingly, the treatment for a chronic cough depends on what is causing it. In many cases, a visit to the doctor will help figure out what is causing the cough and the plan of action will be to solve whatever is causing the cough which will cause the cough to subside. For example, if it’s caused by asthma, then a doctor will prescribe asthma medicine. The Lung Association doesn’t recommend taking over-the-counter medications for a chronic cough, especially for children under the age of 14. “Cough is very common in children. Cough and cold medicines (including cough syrups) are not useful in children and can actually be harmful,” says the source. In most cases, their cough will go away on its own, but if it’s caused by another underlying condition then it’s best to treat that first. If the cough is caused by smoking then the most obvious place to start is to quit smoking!

For adults, the source recommends taking an antihistamine or decongestant, especially if the cough is due to a post nasal drip. Over-the-counter cough medicines will not treat whatever is causing this cough to go on for months on end. Get assessed by a doctor and follow their recommendation.