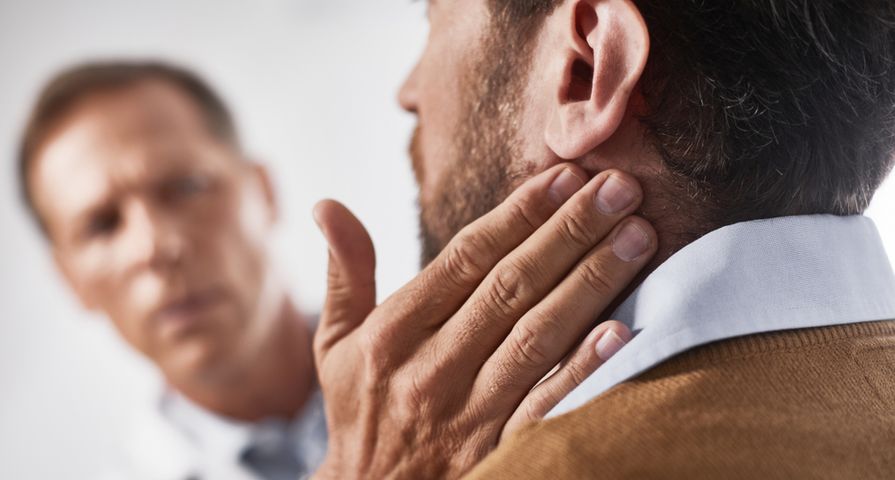 There are hundreds of lymph nodes dispersed throughout the body. Lymph nodes and lymph vessels play an important role in protecting us from harmful bacteria and viruses that make us sick. When lymph nodes are swollen this is an indication that you have some sort of illness or infection which can be quite alarming especially when you can see them.

Ear infections are more common in children but adults can be susceptible to them too. Healthline says, “An ear infection can cause lymph nodes in front of or behind the ears to swell.” Other symptoms of an ear infection include ear pain, a feeling of fullness in the ear, muffled hearing, ear drainage, and nausea.

If you’re only experiencing an earache you may want to wait a day or two to see if it will clear on its own. However, if the pain doesn’t get better or if you develop a fever you should go see your doctor as soon as possible.

One of the most common causes of swollen lymph nodes is from a cold or flu. This happens because the virus will overrun the lymph glands causing them to become inflamed.

Thankfully you’ll likely recover from a cold or flu by getting lots of rest and plenty of fluids. You may also want to check out these simple home remedies for the cold and flu as well as these prevention tips!

Sinus infections occur when fluid builds up in the sinuses which allow germs to grow. Risk factors for sinus infections include having a cold, smoking and secondhand smoke, seasonal allergies, and a weakened immune system.

Common signs of a sinus infection include a runny or stuffy nose, facial pressure or pain, a headache, sore throat, cough, and swollen lymph nodes. Thankfully the symptoms usually go away on their own and you can even get some relief with these natural sinus remedies. That said, if you’re experiencing symptoms for more than 10 days without improvement, or have a severe headache or prolonged fever then make sure you see your doctor.

Mononucleosis also referred to as mono or the “kissing disease” is a viral infection that is spread by saliva and close contact. While it most often affects people ages 15 to 17, anyone can develop it at any age.

Common symptoms of mono include fever, sore throat, and swollen lymph nodes (most often in the neck). Keep in mind, mono can take several weeks and sometimes months to resolve. Treatment mostly involves getting lots of rest, eating healthy, and drinking plenty of fluids.

Swollen lymph nodes are most often a sign of infection but they can also be a symptom of lymphoma. Other common signs and symptoms of lymphoma include chills, fatigue, weight loss, swollen belly, chest pain, shortness of breath, frequent infections, and easy bruising or bleeding.

Risk factors for developing lymphoma include weakened immunity, family history, dietary habits, pesticides, and more. If you are worried that your swollen lymph nodes could be a sign of cancer then speak to your doctor about your concerns.

If you’re experiencing a sore throat as well as swollen and tender lymph nodes in the neck then there’s a chance you have tonsillitis. It can be caused by a viral or bacterial infection both of which can make the tonsils inflamed.

Other symptoms of tonsillitis include white or yellow spots at the back of the throat, bad breath, hoarse voice, and fever. If the tonsillitis is caused by bacteria then a doctor will likely prescribe antibiotics to fight the infection. However, if it was caused by a viral infection then it’ll have to resolve on its own and it’s recommended that you get plenty of rest and fluids.

Skin infections such as cellulitis may be common but it could be serious if left untreated. Cellulitis occurs when a break in your skin such as a cut allows harmful bacteria to enter your body and in some cases, it can enter the lymphatic system.

If the lymphatic system is unable to rid your body of the harmful bacteria your lymph nodes may swell. Other symptoms of cellulitis include red skin, swelling, tenderness and pain, blisters, skin dimpling, and fever. While it most often affects the skin on the lower legs it can also occur in the face as well as other areas of the body. Make sure you seek medical attention because if cellulitis is left untreated and spreads to your lymph nodes and bloodstream it can become life-threatening.

If you’re experiencing swollen lymph nodes under your jaw or around your neck and you have mouth pain, there is a chance it’s caused by a tooth abscess. Mayo Clinic explains, “A tooth abscess is a pocket of pus that’s caused by a bacterial infection. The abscess can occur in different regions of the tooth for different reasons.”

Along with swollen lymph nodes and persistent mouth pain you may also experience sensitivity to hot and cold temperatures, sensitivity to pressure of chewing, and difficulty breathing or swallowing. If you experience any of these symptoms make sure you see your dentist as soon as possible.

Tuberculosis also referred to as TB is an infectious disease that mainly affects the lungs but it can also spread to other areas of the body through your bloodstream. The bacteria that cause this disease can spread from one person to the next through tiny droplets from coughing and sneezing.

When tuberculosis affects the lymph nodes it can cause them to swell. This will usually occur at the sides and base of the neck. Other common symptoms of TB include persistent coughing that lasts for weeks, coughing up blood, chest pain, fatigue, fever, loss of appetite, unintentional weight loss, night sweats, and chills. If this disease is left untreated it can be fatal so make sure you speak to your doctor if you’re experiencing symptoms.

Lupus is a systemic autoimmune disease that happens when your immune system attacks your own tissues and organs. In other words, instead of only targeting bad bacteria and viruses, your body also attacks healthy cells and tissues.

There are several signs and symptoms of lupus and they can greatly change depending on what area of your body the lupus is affecting. Some common symptoms include intense fatigue, fever, joint pain or stiffness, skin rash, weight loss, chest pain, and enlarged lymph nodes.

Swollen lymph nodes are not necessarily unusual in lupus, however, if the swelling gets worse your doctor may want to get a biopsy to rule out lymphoma. Make sure you speak to your doctor if your symptoms change or worsen.

Were you recently scratched or bitten by a cat and are now experiencing swollen lymph nodes? There’s a chance you have cat scratch fever, also called cat scratch disease (CSD).

The good news is CSD is rarely serious and often doesn’t require treatment. However, a doctor may prescribe antibiotics to treat the disease in severe cases or for those with weakened immune systems.

A parasite infection like toxoplasmosis can also cause your lymph nodes to swell. Mayo Clinic says, “Toxoplasmosis is a disease that results from infection with the Toxoplasma gondii parasite, one of the world’s most common parasites.”

Infections usually occur by eating undercooked contaminated meat or through exposure from infected cat feces as well as mother-to-child transmission during pregnancy. The good news is that most healthy people won’t show any symptoms and may not even be aware that they are infected. That said, those who do develop symptoms may experience symptoms similar to the flu including body aches, headache, fatigue, fever, and swollen lymph nodes.