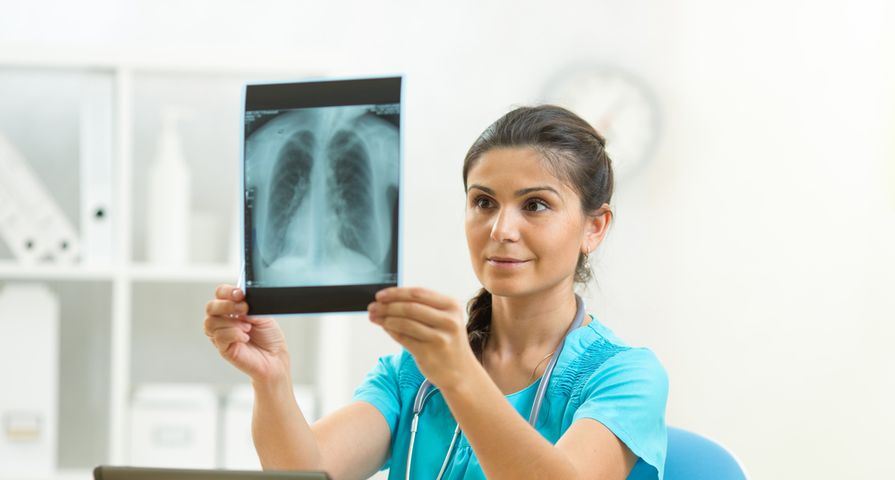 Breathe In These 6 Facts About Pulmonary Fibrosis

There are a variety of lung diseases, and they can all present early symptoms that could prompt a visit to your doctor to catch it in its earlier stages. The American Lung Association notes many people assume their cough or being out of breath is part of normal aging, but that’s not always the case – there could be more to it.

Lung diseases can vary in severity but they should all be taken seriously – they include asthma, Chronic Obstructive Pulmonary Disease (COPD), and lung cancer, notes the association. However, even if you have these telltale symptoms, try to breathe easy until you see your physician for a proper diagnosis…

Sure, it’s pretty normal to have laboured breathing if you’ve just jogged to the bus stop, climbed a large flight of stairs, or tried to keep up with an exercise video. However, the American Lung Association reminds you, “It’s not normal to experience shortness of breath that doesn’t go away after exercising.”

In some cases, you may find yourself trying to catch your breath even when you’ve been idle or have engaged in some light activity.  If you have shortness of breath or labored breathing, then they could be early warning signs of a health issue related to your lungs, it adds.

Livestrong.com says having more mucus than normal could point to some lung diseases – namely asthma. This problem is common in America, and is characterized by chronic inflammation of the airways (that can usually be controlled by a prescription inhaler).

Asthma also means increased production of mucus by the cells in the airways, which can further narrow air passages that have already shrunk due to inflammation. Bronchitis, another form of inflammation of the airways, is often a complication from a cold or infection and can also lead to higher mucus production, it adds.

WebMD has a long list of reasons you may be experiencing chest pain, but it says it can be traced to lung problems. One of these lung conditions is called pleuritis, which the source says is inflammation of the lining of the lungs and chest that can cause sharp pain when you breathe or cough.

Meanwhile, pneumonia is another common cause of chest pain, and this can come on suddenly with a host of symptoms including fever, chills, cough, and coughing up mucus, notes the source. Pneumonia can be very serious, so don’t ignore these symptoms, even if there’s no pain.

Coughing due to a cold can last a while – but if you find that coughing has become part of your regular routine, then it might be time to see a doctor to find out why.

Smoking can cause some people to cough regularly, but even if you do smoke, you shouldn’t ignore it if you’ve been coughing regularly for a few months or even years, warns the Huffington Post.

This condition (known medically as hemoptysis) can be very alarming for a person, and it usually indicates there’s a health problem, explains LungCancer.org. As the name of the website suggests, it can point to signs of lung cancer in particular.

The blood can appear on its own when you’re coughing, or it can be mixed in with mucus during a coughing fit, adds the source. Coughing blood can also be associated with bronchitis. Either way, make sure you get yourself to a doctor pronto in these cases.

The Mayo Clinic says if you’re making wheezing noises when you’re breezing (as you might’ve guessed, this isn’t normal) it’s likely due to asthma and COPD, both of which narrow your airways.

Bronchitis is another possible cause. However, this doesn’t always mean you have a lung disease – there are many other possible reasons behind wheezing, that includes allergies as well as the use of certain medications (particularly aspirin), adds the clinic. Wheezing at night could be related to sleep apnea.

Your first instinct when your voice changes might be that you’re suffering from a sore throat or getting sick, and while that might be the case, it could also be a warning sign of lung disease. Pay attention to whether this hoarseness in the voice lasts longer than a couple weeks. If it doesn’t go away, it should probably get checked out.

Reader’s Digest refers to an Egyptian study that explains “because people with COPD can’t hold as much air in their lungs, they could experience changes in their voice or have trouble getting the words out.”

8. Swelling in One Leg

You wouldn’t think that the lungs have anything to do with what’s happening in the legs, but all of our body parts are connected, so when one is failing it can cause strange symptoms elsewhere in the body. Swelling in the legs can occur due to a blood clot, also known as deep vein thrombosis, says Andrea McKee, MD, chairman of radiation oncology at the Lahey Hospital & Medical Center Sophia Gordon Cancer Center in Burlington, Massachusetts, when talking to Reader’s Digest.

Blood clots anywhere in the body pose a serious risk because they can break off and float into more dangerous areas of the body like the lungs, heart, or brain. A blood clot in the lungs is called a pulmonary embolism and it has the potential to block blood flow which can have some serious implications. According to reports by the National Heart, Lung, and Blood Institute, 30-percent of patients who suffer from a pulmonary embolism die, so it requires immediate attention.

In addition to swelling in the legs, other common symptoms are “shortness of breath, problems breathing, and chest pain,” writes Reader’s Digest.

When our fingers or lips turn blue it means there is something wrong with our blood circulation. Blue fingernails is a common symptom for lung disease, particularly people with COPD because their tissues are not getting enough oxygen.

Reader’s Digest warns people should pay close attention for any changes to their lips, fingernails and skin because it could be due to cyanosis. This condition will cause these body parts to turn blue, gray, or even purple due to a lack of oxygen in their blood which means their body isn’t functioning properly. “The color change might start off subtle and get progressively more noticeable as the disease progresses, or it might appear suddenly during an acute COPD attack,” writes the source.

If you notice any of these changes, consult with a doctor immediately.

You might be experiencing some shoulder pain after a tough workout at the gym or roughing it up on the field during a sports game and it’s probably due to just inflammation or a strained muscle, but shoulder pain that comes on without any explanation is worrisome. If this is the case, you should consult with a doctor.

Reader’s Digest warns that shoulder pain can be a sign of lung cancer, particularly for people who smoke. “Certain types of lung tumors can pinch the nerves that supply the shoulders, which is why some of the earliest symptoms of lung disease can include pain in the shoulders,” writes the source.

A lot of us spend a good portion of our time and focus on trying to shed a few pounds or at least maintain our weight. However when the numbers on the scale begin dropping rapidly without any reasonable explanation, it’s not a good sign.

Weight loss is one of the common symptoms of COPD. In fact, Reader’s Digest states that 40 to 70-percent of COPD patients experience it. “Those dropped pounds are a sign that the body isn’t able to work efficiently. Your body is constantly burning calories just to do basic functions like breathing, but the muscles of people with COPD need to work harder to keep up with the body’s demands, burning about ten times more calories to breathe than people without lung disease,” writes the source.

In addition to COPD, Healthline points out that an extreme dip in weight can be due to lung cancer, or even another type of cancer. Cancer causes weight loss because the cancer cells are using up energy in the body. “It could also result from shifts in the way the body uses energy from food,” says Healthline.

The Top Causes and Risk Factors of Lung Cancer

We all struggle with feeling tired every now and again, but the fatigue associated with lung disease can’t be fixed with a few cups of coffee. The Lung Cancer Alliance points out that lung cancer patients will struggle with fatigue because their lungs are not functioning properly so their body is working overtime.

The difficult thing with this symptom is that it’s a common symptom for several other serious, and not so serious health conditions. So just because you’re feeling a little sluggish over a few days doesn’t mean it’s due to lung disease. The best thing to do is to assess whether it’s in addition to several other symptoms on this list, and consult with a doctor to determine the cause.

There is nothing scary than a serious health condition that comes with no warning signs. Reader’s Digest talked to Andrea McKee, MD, who warns that early stage lung cancer typically presents no symptoms at all. “We usually find stage 1 lung cancer by accident,” like during a chest or spine X-ray for another unrelated issue.

If a patient has lung cancer and is experiencing symptoms elsewhere in the body, it typically means the cancer has spread elsewhere in the body. People who are at a higher risk for lung cancer, for example over the age of 55 and have a 30-plus history of smoking, they should be screened with a low-dose CT scan, suggests the source. “That’s nine million people,” adds McKee.