Symptoms and Causes of Porphyria 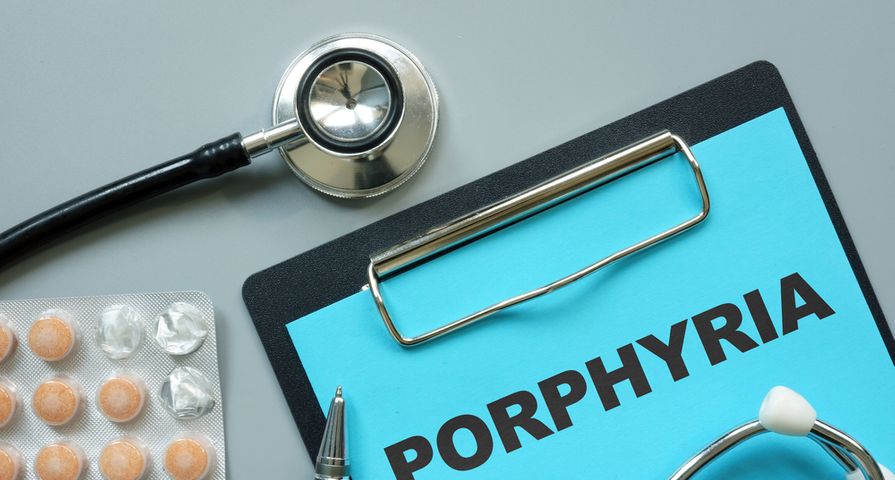 Porphyria is a rare disorder that can involve multiple body systems. Those who have this disorder can have severe symptoms that require intensive treatment, whereas others may never know they have it. In this article, we will cover not only the symptoms and causes of porphyria but also the risk factors, types of porphyria, complications, and treatments of this disease.

So if you or someone you love has been diagnosed with porphyria, keep reading to learn more about this disease and how it can affect almost every aspect of a patient’s life.

Porphyria is a group of eight rare disorders that affect the nervous system or skin. Each one of the eight types of porphyria is significantly different, but “a common feature in all porphyria’s is the accumulation in the body of porphyrins or porphyrin precursors [in the body]” says the American Porphyria Foundation. Porphyrins and porphyrin precursors are chemicals in the body that change into heme, which is what makes blood look red. When these two chemicals build up within the body, they cause you to become sick.

Thankfully, porphyria is a rare disorder, and according to the National Institute for Health (NIH) it affects less than 200,000 people in the United States. Some people can live with the disorder and have no symptoms, so the numbers may be higher.

Porphyria is categorized into two main groups, acute and cutaneous. Acute porphyria affects the nervous system and is then subcategorized into four more types: acute intermittent porphyria, variegate porphyria, hereditary coproporphyria, and delta-aminolevulinic acid (ALA) dehydratase deficiency porphyria reports the NIH. The source also continues to say that “symptoms for acute porphyria’s develop over hours or days and last for days or weeks.”

This rare condition is a genetic disease in most cases. Those who have it most likely inherited a gene mutation from one or both of their parents, says the NIH. Some people who have inherited the gene mutation may never know they have it, whereas others can have significant symptoms. If you know someone in your family who has a porphyria, there is a chance you also have the gene mutation. Talk to your doctor if you are concerned about your risks to discuss evaluation for the disease.

Porphyria cutanea tarda (PCT) is the most common type of porphyria and can be acquired, which means that other factors than the inherited gene can cause this, says the NIH. These risk factors include:

The symptoms of acute porphyria can range from mild to severe and last a few days to weeks. When someone who has acute porphyria has symptoms occur, it is called an attack or flare-up. These attacks can increase in severity without prompt treatment. According to the NIH, most people will only have one or just a few attacks in their lifetime.

The symptoms of acute porphyria will change based on which part of the body is affected. Some of the more common symptoms are pain in the back, abdomen, arms, and legs. If the gut is affected, sufferers may have constipation or nausea and vomiting. Along with all that, there can mental problems, such as anxiety, seizures, and confusion. If the nervous system is involved, then sufferers may have weakness or paralysis says the NIH. In patients who have variegate porphyria or hereditary coproporphyria, they can develop skin blisters when they are exposed to the sun.

Cutaneous means skin, so cutaneous porphyrias are ones that primarily affect the skin, especially when it has been exposed to sunlight. Those who have these conditions can develop symptoms that range from blisters to changes in their skin color. Their skin can be easily wounded and doesn’t heal as quickly as those without porphyria.

In some types of this disease, sufferers will have “pain, burning, stinging, or tingling” reports the NIH when they are exposed to sunlight. As you can see, the symptoms vary greatly from person to person and some people may never even know that they have the disease.

One of the complications of PCT is liver problems. PCT is associated with an increased risk of developing liver cancer. If you have been diagnosed with PCT, your doctor will likely suggest specific blood tests or an ultrasound of your liver to look for liver cancer says the NIH.

Those with protoporphyria, sufferers will need to avoid alcohol and get hepatitis A and B vaccines to protect their liver. If liver damage does occur and is severe a liver transplant may be necessary. Since this type of porphyria affects the bone marrow, you made need to have a bone marrow transplant, “which can cure protoporphyria and keep the disease from damaging the new liver,” says the NIH.

Anemia is when your body does not have enough red blood cells. Some people may never know they are anemic, whereas others can feel very tired. Anemia can happen in two types of cutaneous porphyrias. In addition, “these diseases may also cause the spleen to become enlarged, which can make anemia worse,” reports the NIH.

If you have anemia, there are multiple treatments available. You and your doctor should discuss which ones are right for you and your situation. There may be risks and of course benefits to each type of treatment. It’s important that you fully understand your situation, so you can make the right decision.

Some people will need medications to keep their blood pressure controlled and take precautions like losing weight and diet changes. If you are concerned about your blood pressure, talk to your doctor to learn specific ways to manage it to keep not only your kidneys but your whole body healthy and safe.

If you have acute porphyria there are multiple treatments your doctor may use to manage your symptoms. The Cleveland Clinic reports that intravenous heme or glucose can lower the number of porphyrins or porphyrin precursors that the liver makes. There are some clinical trials available, and you will need to talk to your doctor to learn about which ones are available to you.

People who have severe acute porphyria may need different treatments to manage their symptoms. The Cleveland Clinic tells us that “treatment options may include blood transfusions, surgery to remove the spleen, and liver and bone marrow transplantation.” Every patient will be different and only you and your doctor will be able to know which treatment is best for you.

In cutaneous porphyria, the main treatment is avoiding sunlight. This will help treat and also prevent the skin symptoms sufferers can experience, says the Cleveland Clinic. The source goes on to say, “your doctor may also recommend that you avoid substances, like alcohol, that trigger symptoms. Some people with cutaneous porphyria benefit from therapeutic phlebotomy (blood draw). This type of blood draw reduces the amount of iron in the liver.”

A porphyria diagnosis can change some aspects of your life, but with careful treatment and symptom observation, patients can lead very normal lives. If you have the inherited gene mutation form of porphyria and plan to have children, talk to a genetic specialist who can guide you through the risks of passing the gene on to your children.