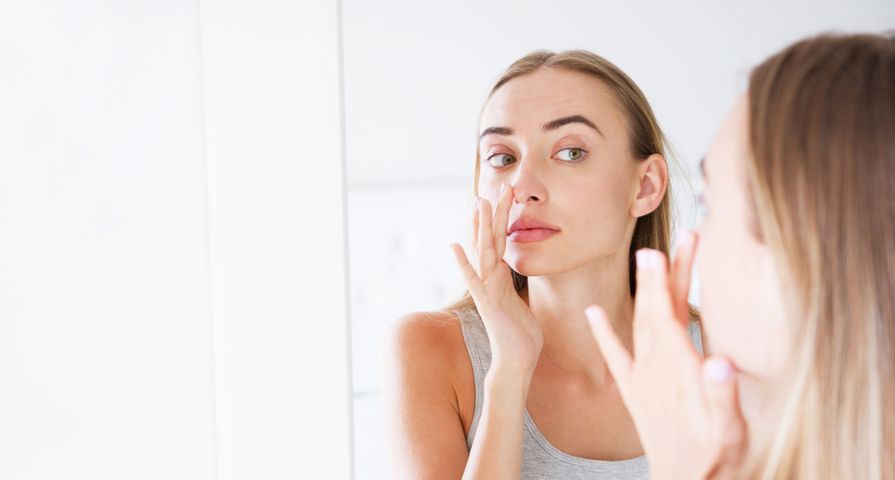 You may have heard of body dysmorphic disorder (BDD), but in a limited context. Many times, the term is thought to refer to people with eating disorders. However, the mental health disorder extends well beyond perception of weight, and more commonly affects your perception about one of more of your features.

Body dysmorphic disorder causes you to believe you have a perceived flaw in your appearance, whether it’s your size, your proportions, or even a body part that you’re ashamed about. While others may not notice your “flaw” at all, you become convinced it’s all people can see. Let’s explore 12 things to know about the disorder…

1. You’re Preoccupied With a Certain Feature

The Mayo Clinic explains that body dysmorphic disorder can commonly cause people to fixate on facial features such as their nose, as well as facial acne and wrinkles. It can also make people overly aware of their hairline and balding. However, it can extend beyond that.

BDD can also cause you to become overly concerned about your skin (including your skin tone), veins, breast size, and even your genitalia, explains the source. Muscle size can also be a factor, and it has its own category called muscle dysmorphia that affects males almost exclusively, adds the source.

2. The Body Part of Concern Can Change

While you might be very self-conscious about your nose at one point, that can shift to another feature such as your ears over time. The Mayo Clinic adds that BDD can be a moving target, drawing your attention to different features at different times.

The source also explains that you might be fixated on more than one body part at a time. These fixations can range from anything including facial to body features, it adds.

VeryWell Mind points out while there’s some crossover between eating disorders such as anorexia (which is defined by limiting food and fear of gaining weight) and body dysmorphic disorders, they’re actually not the same thing.

Those with eating disorders are still concerned about how they are seen by others, but it mostly focuses on size and shape, says the source. Meanwhile, those with body dysmorphic disorder aren’t always fixated on their size: many tend to focus in on a feature such as their nose, for example. The source points out that only about 12-percent of those with body dysmorphic disorder also have an eating disorder.

4. The Thoughts Interfere With Your Normal Functioning

Some people may look in the mirror and think they’d like to improve a feature or two, but leave it at that. If you have body dysmorphic disorder, these types of thoughts are more intrusive, notes the Mayo Clinic. Sources points out that the negative thoughts can last a few hours, or an entire day.

The clinic explains that thoughts about your appearance can become repetitive and time-consuming to the point of disrupting your work and social life. The behaviors to try and “hide” your flaw (which we’ll get to next) can get out of control and cause distress, it adds.

5. You Go Out Of Your Way To Hide Features

The Mayo Clinic explains that those with the disorder go out of their way to try to hide their perceived flaw. This can lead to excessive grooming, picking at your skin, and using makeup or clothing to try and cover up your features that you believe others are staring at.

In some cases, this behavior goes beyond using makeup to change your look: some people end up getting procedures such as plastic surgery to change a feature (such as their nose), but as other sources point out, this very rarely solves the problem and fails to help the person feel better about their appearance. You may also waste a lot of time staring in the mirror or seeking reassurance from others.

6. It Commonly Occurs With Other Mental Disorders

While BDD is a mental health disorder on its own, it may be accompanied by other anxiety disorders, explains the ADAA. The source says those with BDD commonly also suffer from social anxiety, as well as depression and eating disorders.

Because some of these conditions share common traits, BDD can sometimes be misdiagnosed, it adds. For example, fixating on a body part can be confused with obsessive compulsive disorder (OCD), it explains. However, those with BDD will engage in thoughts and behaviors that specifically relate to their appearance, it adds.

7. It Affects As Many Males Than Females

According to stats cited by the ADAA, BDD affects males and females almost equally (the overall prevalence is about 1 in 50-people.) However, it actually occurs in about 2.5-percent of males, compared to 2.2-percent of females, according to the source.

These numbers may be a bit surprising to some – perhaps because of the perceived connection of BDD to eating disorders, the latter which are more common among women. However, males still make up more than 25-percent of cases of anorexia and bulimia, according to the National Eating Disorders Association.

8. Men and Women May Fixate On Different Features

A study looked at the gender differences relating to BDD, and found that rates of depression were similar between both sexes. However, the features that the female subjects fixated on tended to be hips, weight (with a higher likelihood of bulimia), and skin.

Meanwhile, men tended to be more concerned with their body (muscle build) and their hair, it adds. Men were more likely to “use a hat for camouflage” and also had a higher rate of alcohol abuse, adds the source. The study also found that men are as likely to have cosmetic surgery to try and correct a perceived flaw as women.

9. The Exact Cause Is Not Known

Cleveland Clinic says that while the cause isn’t fully understood, it’s believed that BDD might be related to issues with neurotransmitters in the brain that regulate mood. It also acknowledges that BDD commonly occurs with other mental health disorders that involve imbalances in neurotransmitters (such as serotonin), which could help support this theory.

The source said there are other possible factors in the development of BDD, such as experiencing trauma in childhood, negative comments from family and friends, having low self-esteem, and even trying to reach unrealistic beauty standards (as society equates looks with value).

BDD can be distressing, and some may avoid seeking treatment because they’re ashamed of their appearance, but it shouldn’t be ignored because it will rarely resolve on its own (and the symptoms may get worse), according to the Mayo Clinic.

The source urges you to seek treatment from a mental health professional if you display some of the mentioned symptoms or behaviors. Thoughts of suicide are common among BDD sufferers, and if you have these kinds of thoughts (or think about hurting others) then you should get help right away, it adds.

Generally a doctor will take a close look at your health history and perform a physical exam, says WebMD. If they see some evidence of BDD, they will likely refer you to a mental health specialist who will look more closely at your attitude and behavior, it adds.

WebMD notes that BDD can often go undetected, as many people hide their true thoughts and feelings from a doctor. However, constantly seeking plastic surgery to refine your looks is usually a red flag to doctors, it explains.

Once BDD has been confirmed, there are a few options to help you recover, notes WebMD. For example, your health team might put you in individual psychotherapy to help you change your thinking patterns and control related compulsive behavior, it explains. Group therapy is another option.

There are also medications that may be helpful for those suffering from the disorder, although there’s not one in particular that’s specifically approved for BDD, notes the source. These meds include antidepressants (SSRIs in particular), as well as certain antipsychotics that may be used alongside the antidepressant treatments. The outlook is positive for those who get the right treatments and support, it adds.