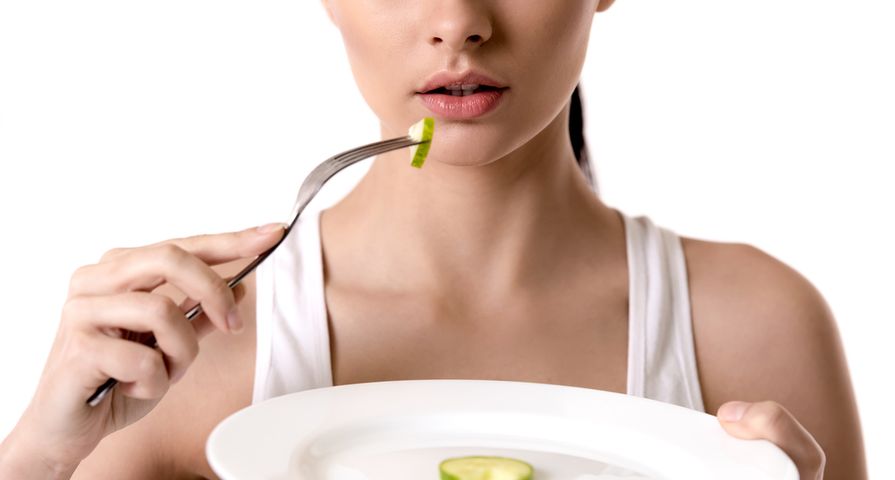 Anorexia nervosa—which is often referred to simply as anorexia—is an eating disorder in which people “have an intense fear of gaining weight,” says WebMD. In order to prevent this weight gain, they severely limit their consumption of food and, as a result, become incredibly thin.

The disorder tends to begin during adolescence, and although it most commonly affects women, it’s possible for men to develop anorexia as well. The chances of a person recovering from the eating disorder is higher depending on how soon it is treated, so be mindful if a loved one begins exhibiting any of the following 12 common physical symptoms.

One of the primary, and most visible symptoms of anorexia is extreme weight loss that occurs over a short period of time, for which there is no medical cause. As mentioned briefly in the introduction, this weight loss is intentional, and results from a person severely restricting the amount of food they eat.

They may also avoid eating entirely, often starving themselves in order to achieve their desired weight loss. Unfortunately, the Mayo Clinic says, “No matter how weight loss is achieved, the person with anorexia has an intense fear of gaining weight.”

It is common for people who struggle with anorexia to also have anemia, where the body lacks a sufficient amount of healthy red blood cells. MedicineNet.com adds that “…people with anorexia tend to have lower numbers of white blood cells, which plays a major role in protecting the body from developing infections.” And a compromised immune system can make them more susceptible to infections, which their body would not have the strength to fight off.

In addition to anemia, anorexia may also lead to other “abnormal laboratory findings” such as low thyroid and hormone levels, low potassium, and a slow heart rate, says the National Eating Disorders Association.

People with anorexia may suffer from insomnia, where they find it hard to fall asleep, or stay sleep throughout the night. As a result of inadequate rest, they often struggle with fatigue throughout the day, making it difficult for them to engage in normal activities.

This lack of shuteye can also impact their attention span and lead to difficulties with concentration and decision-making, all of which stems from poor nourishment and its effects on the brain.

4. Hair that Thins, Breaks or Falls Out

It’s not uncommon for those with anorexia to have hair that breaks, thins, or even falls out—often resulting in areas of baldness. This happens because malnourishment leads to a depletion of the body’s protein stores, and whatever protein there is must be used for essential functions.

And, according to the Eating Disorders Resource Catalogue, “Our hair, which is made up of a protein called keratin, is not as essential to our body’s functioning. So, hair growth stops so the body can focus on keeping that person alive.”

Strangely, although the hair on a person’s head may thin or fall out, they may find themselves growing soft, fine, white hair on their body—particularly on the arms, legs and chest. This hair is known as lanugo, and “is a phenomenon almost exclusively related to anorexia,” says EatingDisorderExpert.co.uk.

Essentially, lanugo grows in an effort by the body to insulate itself. The source explains, “These hairs grow in thickly and attempt to trap heat that is lost from the body before it dissipates.”

Anorexia can have a serious impact on the body’s endocrine system, which “is made up of glands that produce and secrete hormones,” says eMedicineHealth.com. As a result, women with anorexia often experience irregularities in their menstrual cycle.

According to the National Eating Disorders Association, these can include “amenorrhea, irregular periods or only having a period while on hormonal contraceptives.” Amenorrhea, the absence of menstrual periods, is particularly common, affecting “about 90% of adolescent girls with anorexia,” indicates MedicineNet.com.

People with anorexia may also struggle with a variety of gastrointestinal issues. MedicineNet.com notes that constipation and abdominal pain are the most common complaints, and are due to the fact that “the rate at which food is absorbed into the body is slowed down.”

The source adds that these issues—along with others such as bloating or acid reflux—may also be the result of “Starvation and overuse of laxatives,” which can “seriously disrupt the body’s normal functions involved in the elimination process.”

Telltale Traits of a Sociopath

As mentioned briefly earlier, anorexia may cause problems with a person’s heart. These problems can include a slowed heart rate (known as bradycardia) and low blood pressure (hypotension), which MedicineNet.com says are “frequent manifestations of starvation.”

More seriously, someone with anorexia can develop an abnormal heart rhythm (arrhythmia), which the Mayo Clinic indicates can sometimes result in sudden death due to a heart attack.

Dehydration is another common symptoms of anorexia. Although in some cases it is due to a conscious restriction in fluid intake by the individual, it can also occur as a result of certain habits associated with the eating disorder.

These include the use of laxatives or diuretics, frequent vomiting, and excessive exercise. If dehydration occurs over a prolonged period of time, the kidneys can become damaged and may eventually fail.

The same hormonal problems that can cause a woman to have amenorrhea (absent menstrual periods) can also affect her bone health. Specifically, the Osteoporosis and Related Bone Diseases National Resource Center explains that “Low body weight in females can cause the body to stop producing estrogen,” and “Low estrogen levels contribute to significant losses in bone density.”

Additionally, the source says that people with the eating disorder tend to produce a lot of the hormone cortisol, “which is known to trigger bone loss.” As a result, these hormonal problems can make those with anorexia more likely to develop osteoporosis as they age.

Tips To Help You Through The Grieving Process

Swelling in the arms, ankles, feet, or around the eyes is also common in people who struggle with anorexia. This condition is known medically as edema, and “It is caused by hormonal changes brought on by starvation or by purging,” says Eating Disorder Hope.

F.E.A.S.T. (Families Empowered and Supporting Treatment of Eating Disorders) adds that edema “is also associated with laxative withdrawal and abrupt cessation of diuretics.” Such swelling often causes distress for the affected individual, as they are extremely conscious of their physical appearance and body weight.

Oral health problems frequently occur in those with anorexia. In fact, the National Eating Disorders Association says, “Changes in the mouth are oftentimes the first physical signs of an eating disorder.” One such example is that, due to improper nutrition, the gums may bleed easily. Additionally, the source says that chronic dry mouth is common.

And, as a result of frequent vomiting, stomach acid can erode tooth enamel, leading to discoloration, sensitivity, and cavities. The teeth may also become more brittle, cause the edges to “become thin and break off easily.”