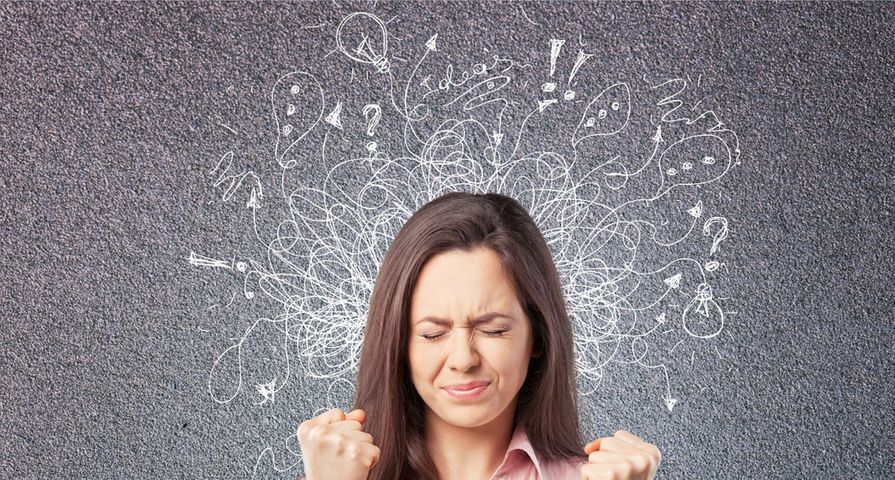 Obsessive-compulsive disorder (OCD) is an anxiety disorder that can disrupt your life and involves repetitive thoughts that won’t subside. It frequently starts in childhood and can last a person’s entire life. It is estimated that around 2-percent of the U.S. population has the disorder.

OCD is not an easy mental disorder to understand, and therefore it can be difficult for medical professionals to diagnose. You may think you have it, but having a comforting routine or being a perfectionist is different than having constant intrusive thoughts that guide your actions. However, if you suspect you or a loved one is suffering from OCD (whether mild or severe), you should be aware of the symptoms.

Twenty symptoms of OCD are…

This is a behavioral trait of many people that have OCD, according to HelpGuide.org. It describes hoarding as “collecting and keeping things with little or no use or value.” While hoarding on its own doesn’t necessarily point to this particular mental disorder, having another symptom, such as depression, compulsive shopping, or tic disorder, makes OCD more likely.

Hoarding in itself can become a health hazard (e.g., a tripping or fire risk) as items pile up and can even pose significant challenges to emergency personnel who would need to access to your home.

The Mayo Clinic says those suffering from OCD often require things to be a certain way, and they may exhibit behaviors such as, “arranging your canned goods to face the same way” and experiencing “intense stress” when objects aren’t orderly.

The clinic also lists compulsive counting (sometimes in particular patterns) as another possible symptom of OCD, as is “following a strict routine.” Basically, you need things to be just so to achieve some feeling of relief, if only temporary.

Although we’re taught to wash our hands often to avoid getting sick, the practice of doing it constantly is one that’s frequently associated with OCD. Health.com says this can include frequent washing with soap and water or excessive use of hand sanitizer.

“The urge commonly stems from a fear of germs (the most common obsession seen in OCD), but it also can be rooted in fears of making others sick or of being impure or immoral,” notes the source. The same urge goes for cleaning objects that are frequently touched or used. Whether it’s doorknobs, appliances, bathroom fixtures, phones, dishes, or even clothes. The source says you may want to consider seeing a medical professional if you still worry about germs even after thoroughly washing.

If you’ve ever been on a plane or in a car on your way to work and wondered if you turned the stove off, you may have a mild symptom of OCD. However, while you may think about it and then put it out of your mind or even check twice if you can (which is normal), those with OCD have to return to the same appliance (e.g., the stove) multiple times or return home to assure themselves that it’s off.

Health.com notes that these “checking” behaviors are actually the most common among OCD sufferers, affecting about 30-percent of those with the disorder. “Checking can be driven by a variety of obsessions, ranging from a fear of getting hurt to deep-seated feelings of irresponsibility,” notes the source.

This can affect an OCD sufferer in a couple of ways, including constant fears about getting hurt, either by an accident or by someone else’s hand. This can lead to a “checking” behavior to ensure doors are always locked.

However, another variation outlined by BeyondOCD.org is that the sufferer may fear hurting someone else, whether it’s physically or mentally. This can go as far as fearing the food you’re making for your loved ones will make them sick. Removing sharp objects from your view or avoiding looking at illicit content that could conjure harmful thoughts are two ways to help control these types of thoughts.

AnxietyBC.com notes that OCD sufferers may have a habit of touching or tapping objects in a particular way, and this symptom can go hand-in-hand with the counting compulsion noted earlier.

This constant touching can border on superstition, for example, “needing to touch a door four times before leaving a room” due to having “unlucky numbers” in their routines, adds the source. Rubbing objects can also be associated with OCD.

The same source, AnxietyBC.com, notes that not all OCD behaviors can be noticed by someone from the outside. Some of these behaviors are internal “mental rituals” that can be distressing or debilitating to the sufferer, but not trigger any red flags to those around them.

“Some perform rituals in their head, such as saying prayers or trying to replace a ‘bad’ image or thought with a ‘good’ image or thought,” notes the source. This can involve going over the same thoughts in your head until they feel “right.”

A common coping mechanism for those with OCD and anxiety is the avoidance of any potential triggers. OCDUK.org states that the goal is “preventing the distress and anguish and the hours of rituals they will be compelled to perform” if faced by a trigger. This could be avoiding places, specific situations, or even people.

While it’s good to recognize what sets off these behaviors, avoiding situations, places or things could prevent you from living your life, not to mention it’s just another form of sweeping things under the rug.

One of the reasons why people who suffer from OCD feel the need to check things is for reassurance. When an individual checks the stove multiple times, it is to reassure themselves that it is not turned on and not a hazard. Sometimes the initial check isn’t enough to provide temporary relief and they go back until they feel they’re okay and have been reassured.

Reassurance can come in other forms, such as seeking reassurance from others (e.g., that they didn’t embarrass themselves) and ask them multiple times to repeat the events of social situations. AniextyBC.com notes how children often seek reassurance from their parents for information about the world. While this is a totally normal behavior, what signifies OCD is continuously asking for reassurance on the same topic for a sense of relief.

Religion is very important to people, because it provides a basis for their beliefs and values. However, someone with OCD may place a slightly stronger emphasis on religion for other purposes. PsychCentral.com states how someone who isn’t suffering from OCD would quickly move on from a disturbing thought, whereas someone with OCD would dwell on it and feel guilty or remorseful.

In regards to religion, people with OCD might be fearful that they cannot truly be cleansed of their sins, whether they be physical actions or mental thoughts. The source notes that this is often why prayers may often become rituals.

The OCD Center of Los Angeles mentions something associated with the disorder called “memory hoarding,” which is not quite the same as the physical hoarding of objects we already mentioned, although there are similar goals. “Memory hoarding is a mental compulsion to over-attend to the details of an event, person, or object in an attempt to mentally store it for safekeeping,” notes the source, adding this serves the same function for a “mental hoarder” as an old newspaper might for a hoarder of old newspapers.

Those who hoard memories have the distorted belief they will need to recall those thoughts in 100-percent accuracy at a later date. However, by trying to remember all details, they might miss what’s happening now. “Someone with OCD who is engaging in memory hoarding symptoms is likely to feel trapped in a state of never fully being able to take in the true value of this moment,” explains the source.

While some people might feel compelled to pick at acne or scabs, those who suffer from this disorder often pick at healthy skin. The condition is usually chronic, but there can be periods of remission followed by greater intensity of the symptoms.

The Huffington Post says plainly that the “intense fear of guilt may be at the heart of obsessive-compulsive disorder.” Having a predisposition to feeling guilty can become pathological and lead to OCD.

The source says a study by Italian researchers showed patients with OCD “may perceive guilt to be more threatening than most people do,” making the emotion intolerable. The patient will attempt to “cleanse” any thought or impulse that may trigger guilt.

While everyone (or most everyone) will have sexual fantasies, whether they admit it or not, those with OCD will often experience sexual obsessions that are more intrusive. About 6- to 24-percent of OCD patients will experience some form of sexual obsession, notes VeryWell Mind.

The obsessions often involve themes that are considered forbidden, such as sexual abuse, incest, beastiality, or sex with a minor. However, it’s important to note that while OCD sufferers might have these kinds of thoughts, it doesn’t mean they will act on them. In fact, “a person with OCD will find the obsession immoral and feel repelled at the thought of acting upon it,” adds the source. The source also says men and women with OCD will experience these types of obsessions at about the same rates.

A common tendency of those who struggle with obsessive-compulsive disorder is excessive double-checking. This could result in returning two, three, ten, or even twenty times to double-check that the stove is off or the door is locked, which are both common tendencies for those with OCD.

Double-checking occasionally is not a cause for concern, but if this compulsion becomes a ritual or interrupts your daily life, it may be a cause of a deeper-rooted issue.

16. Fear of Contamination or Dirt

One of the more specific symptoms of obsessive-compulsive disorder is an intense fear of contamination or dirt. This symptom goes hand-in-hand with frequent handwashing.

Typically those that struggle with this fear become distressed to touch things that other people may have touched like doorknobs. They may also avoid hugging, shaking hands, or touching others because of this fear of contamination.

The fear of losing control is often a symptom associated with obsessive-compulsive disorder. This fear is often what leads to obsessive checking behaviors.

“We’ve shown that people who believe they’re going to lose control are significantly more likely to exhibit checking behavior with greater frequency,” says Adam Radomsky, a psychology professor in the Faculty of Arts and Science.

Another common symptom of OCD is the tendency to perform tasks in a certain pattern or counting while performing certain tasks. A common example of this is counting while you walk up the stairs or while you clean. Often these counting behaviors stem from superstitious beliefs.

Patients who have been diagnosed with OCD often struggle with relationships and tend to dissect individual encounters at length whether it be with romantic partners, friends, family, coworkers, or even strangers. An example of this could be dwelling extensively on an interaction with a coworker and whether they were offended.

Dwelling on uncomfortable situations is common human nature, but it could be a sign of OCD if this spirals into deep-rooted fear or self-doubt.

It’s common for those with obsessive-compulsive disorder to fixate on their looks in an extreme way. This disorder is called body dysmorphic disorder (BDD) and is often related to OCD. The condition causes people to fixate on a part of their body that they consider unattractive, which is commonly their skin, nose, or hair.

Almost everyone has some sort of physical insecurity, but it could become a sign of OCD if this insecurity leads to hours a day checking the mirror and fixating on it.