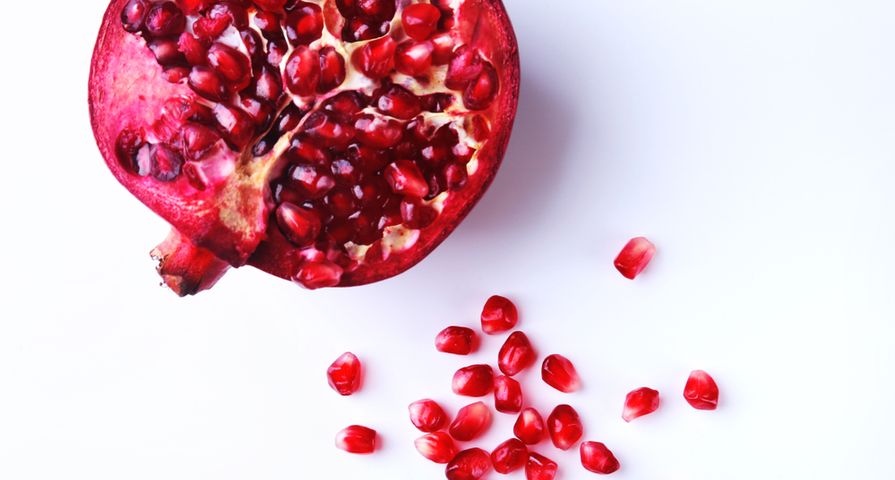 If you’ve been taking pomegranates for granted up until now, maybe the points we’re about to cover will change your mind. These delicious fruits are native to northern India, but can also be found around the Mediterranean – and they grow right here at home in Arizona and California.

Whether you’re eating the seeds from the fruit in a salad, yogurt, or a dessert (they’re quite versatile), or drinking pomegranate juice, there are a variety of health benefits that are a bonus to its delicious flavor. Let’s take a look at 12 reasons you should make these brilliantly red fruits part of your regular diet…

These help keep free radicals from bouncing around your body, which has been linked to cell damage and diseases such as cancer. But while most fruits have some sort of antioxidants such as vitamin C, pomegranates have the benefit of especially potent ones called polyphenols that also give the fruits their color.

These polyphenols are the same compounds that give green tea its healthy edge. They also contain almost half of the daily-recommended intake of vitamin C, and have three times more antioxidants than tea or red wine, according to Medical News Today. (For more antioxidant foods check out this article on Super Antioxidant Rich Foods).

Pomegranates can aid your digestive tract in more ways than one, which is especially helpful during the holiday season when the meals get a little bigger. Juice from pomegranates has been found to reduce inflammation in the gut that’s related to Crohn’s disease and colitis, allowing food to pass more freely.

Meanwhile, pomegranates also contain a pretty healthy dose of dietary fiber – about 7-grams per cup of arils (seed coverings) according to Healthline. Fiber can aid in the health of your colon, while adding weight to your stool and softening it to reduce the chance of constipation.

When it comes to the health of your arteries and your heart, pomegranates rank in the top tier. That’s because, according to studies, the juice can boost blood flow and prevent arteries from hardening. Medical News Today notes that the juice can also inhibit growth of plaque in the arteries, which can lead to a heart attack or stroke.

Not only can the fruit juice help stop hardening of the arteries (known in the medical world as atherosclerosis), but also it may even be able to reverse the damage and clear clogged passages, according to WebMD. The source cites a study that simulated the effect of high blood pressure on cells, and that shows those cells that were treated with the fruit juice had less damage. (For more heart healthy foods, check out this list of Best Foods For Your Heart).

Speaking of heart health, pomegranates may be beneficial to those who have high blood pressure. The only problem is that high blood pressure isn’t something you’ll know about unless you visit a doctor, because there are usually little or no warning signs.

However, Medical News Today notes that two glasses of pomegranate juice per day may help drop your systolic blood pressure, which is the amount of force on your vessels from blood being pushed out from your heart. A normal reading is below 120, and 140 or more suggests hypertension. Make sure you follow a doctor’s recommendations along with drinking pomegranate juice to address this.

Aside from improving gut inflammation, pomegranates may have anti-inflammatory properties that benefit a variety of other conditions ranging from heart disease to cancer that are linked to chronic inflammation. This anti-inflammatory effect has been attributed to potent antioxidants in the fruit called punicalagins.

Healthline cites test tube research that shows that these antioxidants not only help the digestive tract, but can also reduce inflammation in certain types of cancer cells (including colon and breast cancer). Another study shows that consuming about 1-cup of the juice per day can reduce inflammatory markers in patients with diabetes, adds the source.

While the research is still in the early stages, there are some promising studies that suggest pomegranate juice can halt the progress of prostate cancer cells, says the Mayo Clinic. The source explains early findings showed a longer rate for prostate specific-antigen or PSA doubling time, which is a marker for prostate cancer progression.

The source makes it clear that there have been no confirmation studies of this sort since the initial findings, and that the initial research didn’t use a control or placebo group. However, the American Cancer Society notes the research continues, looking at extracts from pomegranate, green tea, and others. Meanwhile, lab studies suggest that pomegranate extract might help slow or even reverse breast cancer cells – but more research is needed.

Research from 2011 shows that these little red fruits could actually make you feel less stressed out, specifically at work where stress levels often run high. Drinking about half a liter of pomegranate juice per day was shown to have a lowering impact on stress hormones, according to an article in The Telegraph.

The research involved 60 participants consuming 500-ml of pomegranate juice for two weeks. The results? All of them said they felt “more enthusiastic and less distressed” after consuming the beverage, the article notes. We should add a disclaimer here though: the study was funded by Pomegreat (drinks company), according to the source.

Should we be calling pomegranate juice the “love juice”? Well, that might be going a bit far. But Medical News Today points out there have been indications that the juice can boost sex drive as well as making both men and women more fertile.

The source attributes this benefit to the high concentration of antioxidants, noting oxidative stress can cause problems with male sperm and female fertility. Meanwhile, the source adds that drinking the juice can raise testosterone levels in men (and women), which can lead to more trips to the bedroom.

Speaking of better performance (ahem), pomegranate juice might be beneficial to those who like to test their limits in sport. VeryWell notes that there’s research to back this up, explaining that exercise puts a lot of stress – including oxidative stress – on the body. But the juice might help counteract some of this.

The source adds that some athletes are drinking the juice to experience less discomfort while training, and that the combination of antioxidants found in the fruit can boost athletic prowess and even muscle strength. For example, the polyphenols we mentioned earlier apparently aid in muscle recovery. Meanwhile, nitrates found in pomegranate can help deliver more oxygen to muscles by opening up blood vessels, notes the source.

The cold season is almost upon us – literally. But with a regular dose of pomegranate juice, you may be able to ward off some of those upper respiratory infections thanks to a rich source of vitamin C and vitamin E. For example, the compound punicalagin found in the fruits was shown to help suppress influenza (flu).

In fact, as Medical News Today points out, pomegranate juice performed well in lab tests as an antibacterial and antiviral agent. It may even hold promise to help protect against food poisoning from pathogens, which can be particularly dangerous to young children and the elderly. Of course, proper food handling and preparation are always the best line of defense.

Do you remember the last time you drank pomegranate juice? If not, you may be able to more easily if you drink it on a regular basis. There is some evidence that the fruit extract can have positive effects on memory, particularly in those who have had their memory affected by heart surgery.

Healthline cites a study involving 28 older adults that had concerns about their memory. When they consumed 8-ounces of pomegranate juice per day, they had improved markers for memory relating to visual and verbal recall. The source adds that some mice studies have suggested there could be benefits for Alzheimer’s patients.

We’ve mentioned already how pomegranate juice can reduce inflammatory markers in diabetes patients. But there’s more to it – Medical News Today notes that the fruit juice could help regulate blood sugar (it lowers fasting glucose levels in diabetics) and reduce [hormone that regulates glucose in the blood] resistance, even within a few hours of drinking it.

Too much glucose in their blood inhibits the body’s ability to convert it to energy. This can lead to a condition called prediabetes, which causes the pancreas to work even harder to produce the hormone to use the sugar. The pancreas might not be able to keep up with the increased demand, leading to type 2 diabetes.