The Incredible Health Benefits of Onions 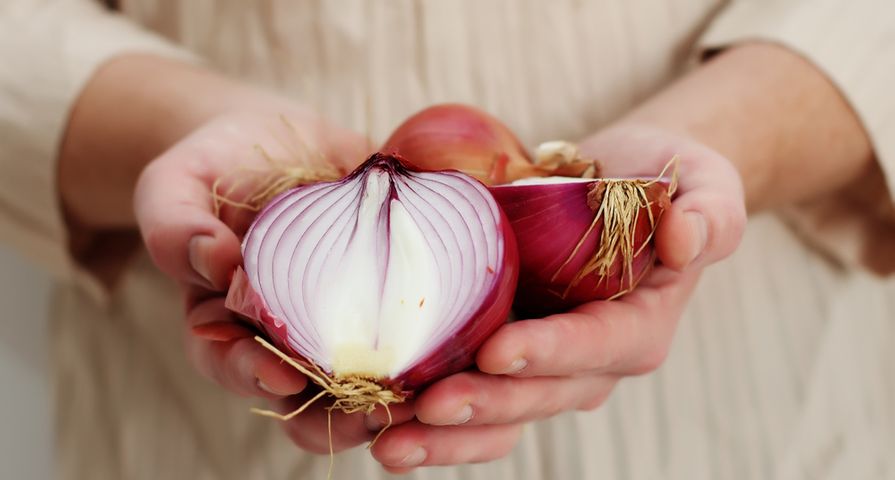 When we think of onions, whether it be sweet or red, we most likely think of them as a great cooking ingredient that adds terrific flavor and aroma to just about any dish. The downside? Well, we also probably think of their potent smell (hello, bad breath) and how they make us cry when we cut them.

While this is all true, what most people don’t realize is that in addition to being a great cooking staple and tasty ingredient, this food can also be extremely healthy for us! Here’s a look at the 12 greatest health benefits of onions…

Onions can help improve our digestion because they are “rich in inulin, a type of fiber that acts as a prebiotic,” says Health.com. The source goes on to explain that prebiotics are good because they serve as food for probiotics, “and help those beneficial microbes flourish.”

The inulin in onions also makes them good for relieving constipation, improving blood sugar regulation, nutrient absorption, and they improve bone density (which we’ll get to next). There is also some evidence that onions could help support weight loss, too.

Ever since we were little kids it’s always been emphasized that good strong and healthy bones are important! Luckily there are many things we can do to build up bone density, starting with eating healthy.

Health.com found one study in particular that examined perimenopausal and postmenopausal Caucasian women 50 and older. The research showed women who ate onions more frequently had better density. They were also able to decrease their chances of a hip fracture by more than 20-percent against the women who never ate any onions.

Good for the Heart

We need to take good care of our heart and a great way to do this is by eating healthy. Healthline notes that onions have the ability to lower our risk of heart disease by fighting inflammation, decreasing triglycerides and reducing cholesterol levels. “Their potent anti-inflammatory properties may also help reduce high blood pressure and protect against blood clots,” writes the source.

One of it’s best weapons is quercetin, a flavonoid antioxidant that works as an anti-inflammatory to reduce high cholesterol levels and other heart disease risk factors. For example, a study published in the British Journal of Nutrition looked at 70 overweight people with high blood pressure and found that consuming 162-mg of onion extract a day can reduce systolic blood pressure by 3 to 6-mmHg.

Onions have also been shown to reduce cholesterol levels, says Healthline, but we’ll get into that more later on in the article.

There are several foods that are touted as having cancer-fighting properties, and believe it or not, onions are one of them! Health.com refers to a study published in the American Journal of Clinical Nutrition which found that people living in Switzerland and Italy who ate onions and garlic had a lower risk of cancer.

“They found that among the populations studied, there was an inverse link between the frequency of use of these veggies and the risk of several common cancers — meaning the more onions and garlic people ate, the lower the cancer rate,” writes the source.

When looking for foods to eat that will act as fuel for our body it’s important to pick ones that are nutrient-dense, like onions. Onions are low in calories with one medium onion amounting to only 44-calories. They’re also high in vitamin C, “a nutrient involved in regulating immune health, collagen production, tissue repair and iron absorption,” writes Healthline. The source also states that it works as a powerful antioxidant to protect our cells while fighting against any damage from free radicals.

In addition to being rich in vitamin C, onions are also high in vitamin B, including folate and pyridoxine. These nutrients “play key roles in metabolism, red blood cell production and nerve function,” writes Healthline.

Lastly, the source says onions are also high in potassium which is a nutrient that many people don’t get enough of. Potassium is needed for “normal cellular function, fluid balance, nerve transmission, kidney function and muscle contraction.” According to Healthline, most Americans only get about half the recommended daily amount of potassium.

High cholesterol can be extremely dangerous because it’s a huge risk factor for heart disease, so it’s important we take steps to manage cholesterol levels. It seems eating more onions could be one way to do this.

Health.com cites a study which examined overweight and obese women with polycystic ovary syndrome. The researchers performed a controlled clinical trial by having half the patients eat a high onion diet (raw red onion) and the other half eat a low onion diet. Eight weeks later the patients were examined and the results showed the women who ate a high onion diet had a great reduction of “bad” LDL cholesterol.

The source also refers to a different study looking at onion juice (yes, it’s a thing). This study found that the women with high cholesterol who drank onion juice daily for 8-weeks were able to lower their total LDL cholesterol and reduce their weight measurements compared to those who drank a placebo.

Unless you’re diabetic, you probably don’t think about blood sugar all that much. While this is obviously something that’s important for diabetics to consider, it’s also noteworthy for those who aren’t.

Onions have been found to actually reduce blood sugar levels. A study published in the journal of Environmental Health Insights found that diabetics who ate about 3.5-ounces of fresh red onion were able to reduce their fasting blood sugar levels by about 40-mg/dl after only 4-hours, says Healthline.

There are also animal studies which provide similar findings. A study on diabetic rats found that the rats who were “fed food containing 5-percent onion extract for 28-days experienced decreased fasting blood sugar and had substantially lower body fat than the control group,” writes Healthline.

Other factors that make onions good for battling blood sugar levels is that they contain compounds like sulfur and quercetin, both of which have anti-diabetic effects. “Quercetin has been shown to interact with cells in the small intestine, pancreas, skeletal muscle, fat tissue and liver to control whole-body blood sugar regulation.”

Bacteria can be quite nasty and in some cases even dangerous. Onions help fight against dangerous bacteria like Escherichia coli (E. coli), Pseudomonas aeruginosa, Staphylococcus aureus (S. aureus) and Bacillus cereus, says Healthline. The source goes on to state that onion extract can actually inhibit the growth of “Vibrio cholerae, a bacteria that is a major public health concern in the developing world.”

Also, quercetin which can be extracted from onions has also been shown to be quite powerful when fighting against bacteria. To back these claims up, Healthline cites a test-tube study published in the Journal of Agricultural and Food Chemistry which found that “quercetin extracted from yellow onion skin successfully inhibited the growth of Helicobacter pylori (H. pylori) and Methicillin-resistant Staphylococcus aureus (MRSA).”

If you’re like me, you’ve probably never heard of food synergy before. To put it plainly, it’s basically the idea that the benefits of eating two foods together can be better than eating them separately. Onions seem to have this relationship with tomatoes. “Scientists believe sulfur compounds in onions boost the absorption of lycopene, an antioxidant in tomatoes tied to protection against cancer and heart disease, as well as brain, bone, and eye health,” writes Health.com.

Thankfully there are many recipes that call for both tomatoes and onions and there are many, many different ways to enjoy these two foods together! Try mixing them together in an omelette, pasta sauce, sliced up on a sandwich, in a salad, or even in some soup!

When the antioxidants in onions work to remove free radicals in the body, they also reduce inflammation and improve our immune system. LiveScience lists research from the University of Maryland Medical Center that states the quercetin found in onions work to “reduce allergic reactions by stopping your body from producing histamines, which are what make you sneeze, cry and itch if you’re having an allergic reaction.”

Finding that you’re stuffed up? Try cooking with onions to help drain the sinuses, says StyleCraze. The antihistamine properties of quercetin will reduce congestion. If you’re really feeling bold, the source says you can also bite into a raw onion because the sulfur compounds will help break down mucus.

Good oral health is something we all strive for, especially when a trip to the dentist is looming around the corner. If you’re like me and hate flossing, try eating onions on a regular basis. “Onions contain thiosulfinates and thiosulfonates (the sulfur compounds) that help reduce bacteria that cause tooth decay,” says StyleCraze.

The source notes that you’ll reap the best benefits if you consume them raw because cooking can diminish some of the beneficial compounds. Another plus factor about onions is that they contain vitamin C which also promotes healthy teeth and according to some, can help relieve tooth pain.

The biggest downside of onions when it comes to oral health is that they cause bad breath. If you’re going to try eating raw onions to fight tooth decay, you might want to rinse thoroughly afterwards.