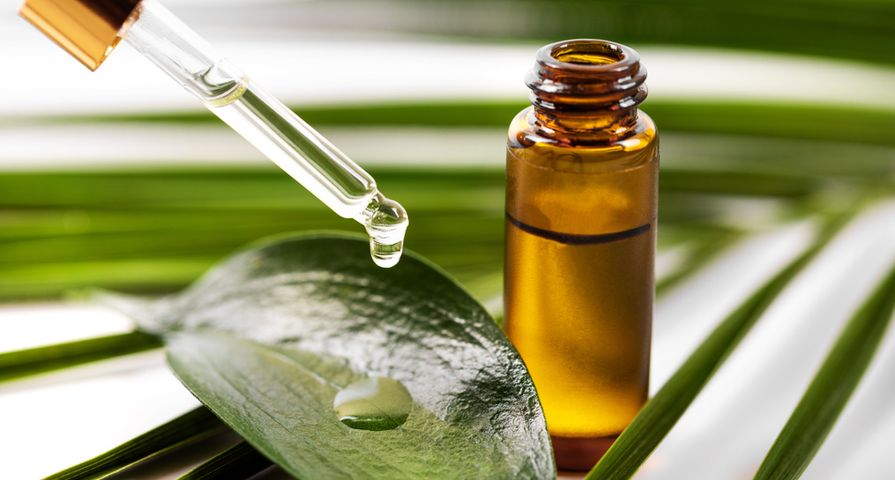 We (mostly) all like tea and trees, and we know the benefits of certain oils. Put them all together, and you have tea tree oil – which has many health benefits you may not be aware of.

Reader’s Digest says people have been using this oil for years, and that it “deserves a permanent spot in your medicine cabinet.” Let’s take a look at 12 reasons why…

The source suggests diluting a few drops of this wonder oil with 20 to 40-drops of witch hazel up to 2-times per day with a cotton swab. But it warns not to overdo it – the solution can end up drying out your skin, triggering your body to produce natural oils that acne thrives in, it adds.

The same source also explains that if you’re experiencing unpleasant odors from your feet, then you can use tea tree oil as an essential ingredient in a solution that can address this problem.

The mix contains 10-drops of tea tree oil, along with 1-tablespoon of dried rosemary, dried sage (to discourage perspiration), fresh ginger root, baking soda, and Epsom salts. Following the source’s directions, you’ll be soaking your feet in this solution for 15-minutes. The oil may also be effective at treating athlete’s foot, adds the source.

Healthline.com says dandruff – which, as you probably know, is flakes of dead skin that fall from your scalp – isn’t dangerous. However, as some of you also know, it can be annoying to be brushing flakes off your shoulders throughout the day.

Tea tree oil comes to the rescue! Healthline says there’s at least 1-study that shows this oil makes a difference for this issue. The 4-week study involved a group using shampoo that contained tea tree oil, resulting in a 40-percent improvement in dandruff and itchiness. You can try this by adding a few drops of tea tree oil to a “dollop” of shampoo next time you wash your hair, it adds.

DrAxe.com admits research on the effectiveness of tea tree oil to soothe skin irritations is limited, but notes the oil has “antimicrobial and anti-inflammatory properties” that may aid in this area.

It cites a pilot study that shows tea tree oil promoted healing of patient wounds. “And there have been case studies that show tea tree oil’s ability to treat infected chronic wounds,” it adds. You can also turn to this oil to treat sunburns and bug bites – but do a small patch test first to ensure there’s no adverse reaction to the oil, it adds.

If you’re looking for a more natural way to keep your underarms smelling acceptable throughout a stressful workday, then the antibacterial effects of tea tree oil may be a solution, says Healthline.

It notes tea tree oil can be “an ideal natural alternative to commercial deodorants and antiperspirants.” The source even provides a link to a recipe for an all-natural deodorant (containing tea tree oil, coconut oil, shea butter, baking soda, and arrow root powder) courtesy of Modern Hippie.

It’s 1-of the most feared words of parents of school-aged children – LICE! These unpleasant little parasites that feed from the scalp of the host can spread quickly in a classroom setting, but tea tree oil can be your friend if your kid falls victim.

DrAxe.com says the oil has “insecticidal effects,” and backs this up by citing a lab study in Italy that found tea tree oil used alone destroys lice –  “with treatment resulting in 100 percent mortality after 30 minutes of exposure.” A higher concentration of the oil stopped 50-percent of the eggs from hatching, it adds. It’s also a very effective lice killer when mixed with nerolidol (in a 1:2-ratio), notes the source. It says it can also be effective in controlling scabies infestations, which can cause itching and rashes.

Toenail fungus can be tough to eliminate, even with powerful prescription ointments. However, Reader’s Digest cites a study that had participants apply 100-percent pure tea tree oil to nail fungus for at least 3-months “did as well at killing it as did those using prescription antifungal cream.”

Of the groups using tea tree oil or the cream, both saw a 60-percent success rate in partially or completely erasing symptoms, according to the source. It suggests applying 1 or 2-drops of pure tea tree oil to the affected nail up to 2-times daily (being careful to keep it on the nail, not the skin).

If you’re tired of using your commercial mouthwash, which often contains alcohol, then perhaps you’ll want to try the tea tree oil alternative. Healthline.com says that research has shown that tea tree oil can fight the germs that cause tooth decay and foul breath.

In fact, the source says 1-study shows the tea tree oil “was more effective against plaque-causing bacteria than chlorhexidine,” which is a common oral disinfectant. To make your own version, add a drop of tea tree oil to a cup of warm water, mix it up, and swish for 30-seconds, it notes. (Don’t swallow it).

Instead of carrying around store-bought hand sanitizers, or washing your hands every 30-minutes, you might want to try a tea tree oil solution, says Healthline. It cites studies that claim the oil kills bacteria and viruses that can cause illnesses (including E. coli).

Antibiotic resistance is a thing, and it can cause treatments meant to erase bacterial infections to fail, says DrAxe.com. Basically, this occurs when people overuse antibiotics, leading to the rise of antibiotic-resistant bacteria.

However, the source says tea tree oil has been used as a natural replacement (or in conjunction with conventional treatments) thanks to its “powerful antibacterial agents, without the adverse side effects.” It cites research published in The Open Microbiology Journal that shows essential oils (including tea tree oil) “have a positive synergistic effect” when combined with antibiotics, giving hope to researchers it could reduce antibiotic resistance.

Livestrong.com explains that tea tree oil can be a powerful ally to bust through blocked nasal passages. It says that while breathing steam can be effective for congestion on its own, adding tea tree oil can increase its effectiveness (add 2-drops of the oil to a boiled cup of water and breathe in the vapors).

You can also put tea tree oil directly into a vaporizer (during the day or night), or put it on a cloth to be inhaled throughout the day, it adds. The last method should only be done for short periods of time, and it’s best to inhale through the nose and exhale from the mouth, it advises.

This is a common skin condition that causes excess skin cells to develop on the surface, resulting in “plaques” that can be itchy and patchy. However, Reader’s Digest says tea tree oil can make a difference for those suffering with this condition.

It says to rub a few drops of the oil (diluted with a bit of olive oil) directly into the skin patches, several times each day. “The Australian remedy is useful for relieving itch and softening plaques, especially if you have a mild case,” it explains.