Home » Your Health » Signs and Symptoms of Non-Melanoma Skin Cancer 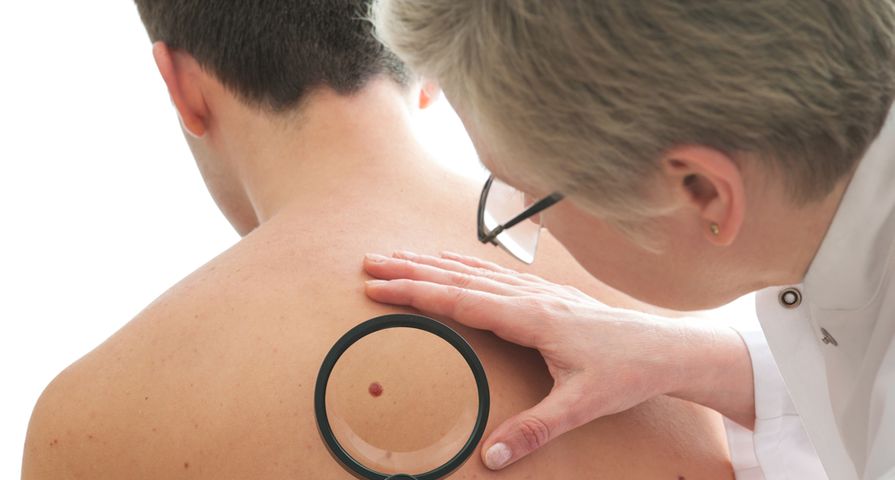 Like melanoma, the vast majority of non-melanoma skin cancer is caused by the sun’s ultraviolet (UV) radiation, and it most often occurs on areas that have been directly exposed to the sun, such as the head, face, neck, arms, back, and shoulders.

According to the Skin Cancer Foundation, 40- to 50-percent of Americans that live to age 65 will have BCC or SCC at least once in their lifetime. Given the frequency and severity of these cancers, it’s important to be aware of the signs and symptoms in order to begin treatment as early as possible.

What is Non-Melanoma Skin Cancer?

Before we dive into the subtypes of this skin cancer and their subsequent signs and symptoms, let’s briefly touch on what non-melanoma skin cancer is. According to the Canadian Cancer Society, it’s a term used to refer to a group of skin cancers that “grow into and destroy nearby tissue.” Not only does it destroy tissue but if left untreated, can spread (metastasize) to other parts of the body. Luckily, this is rare. Most skin cancers are found early enough to be treated.

Skin Cancer Symptoms That are More Than Skin Deep

As previously mentioned, BCC is the most common type of skin cancer. It accounts for about 75- to 80-percent of all skin cancers, says the Canadian Cancer Society. “It starts in basal cells of the skin, which are round cells found in the top or outer layer of the skin (epidermis). BCC tends to grow slowly. It is rare for BCC to spread to other parts of the body, but it may grow into nearby tissue if left untreated,” writes the source. It typically grows on the parts of the body that are most often exposed to the sun, such as the face, neck, and head. It is also commonly diagnosed in people who are middle-aged or older.

Similar to SCC, there are several subtypes of BCC. The most common subtype is nodular BCC, followed by superficial BCC. There’s also infiltrative and micronodular BCCs, which are found in the head and neck areas, and lastly morpheaform BCC. We’ll get into the signs and symptoms of each of these later on in the article.

According to the Canadian Cancer Society, SCC is the second most common type of skin cancer, as it makes up about 20-percent of all skin cancers. “SCC starts in squamous cells of the skin, which are flat cells found in the outer part of the epidermis. SCC usually grows slowly, but it grows more quickly than BCC. It is also more likely than BCC to grow deeper into the skin and spread,” writes the source.

SCC usually develops in places that don’t see the sun as often. “It can develop on injured or inflamed areas of the skin, such as scars, burns, and sores or ulcers that don’t heal. SCC can also develop on the skin around the anus and vagina.” The subtypes of SCC are referred to as desmoplastic SCC and adenosquamous carcinoma of the skin. If left untreated, these types of cancer are notorious for returning. Keratoacanthoma is sometimes considered to be a subtype of SCC, because it is treated like SCC. It’s a tumor that grows quickly and over a short period of time and then shrinks without reason.

BCC can appear as red or irritated patches of skin that are slightly scaly, says WebMD. This is a common symptom of BCC skin cancer, more specifically the superficial subtype. The Canadian Cancer Society says superficial BCC is the second most common subtype of BCC and usually grows on the “trunk” of the body (i.e., the arms or legs).

Healthline describes it as “a reddish patch on the skin, which is often flat and scaly. It continues to grow and often has a raised edge.” This type of skin cancer can sometimes be confused with psoriasis or eczema.

The sores caused by BCC are quite fragile, says WebMD, and they can bleed easily. The American Cancer Society also points out that they can have “oozing or crusted areas” that don’t heal, or they will heal and then come back. It’s basically a non-healing sore.

Morpheaform BCC is the subtype of BCC that will appear as a scar. It is also sometimes referred to as sclerosing or fibrosing BCC. It usually develops in the head and neck area, says the Canadian Cancer Society, and will grow and spread more quickly than other BCC subtypes, such as nodular and superficial BCC.

It will resemble a scar that might have healed over but left an imprint. It’s the least common type of BCC, so it’s fairly rare. “It typically resembles a scar-like lesion with a white and waxy appearance and no defined border. This type of carcinoma can indicate a particularly invasive form of BCC, which is more likely to be disfiguring,” explains Healthline.

In addition to being white and waxy in appearance, VeryWell Health states it can also be “firm, ill-defined at the border, flat or slightly depressed, yellowish in color, and the surface tends to be smooth and shiny.”

Some people might find a pink or flesh-colored bump that has raised edges with a lower area in the center. “This type appears as a bump on the skin that is white, skin-colored, or pink. It’s often translucent, with blood vessels underneath that are visible,” writes Healthline. As it grows, the blood vessels might spread out from it like the spokes of a wheel, says the American Cancer Society.

If you find a pink growth on your skin that looks something like this, it could be BCC skin cancer most likely the subtype that is referred to as nodular BCC. The Canadian Cancer Society explains that it often grows on the areas of the face that are exposed to the sun.

Could Eating Citrus Fruit Raise Your Risk of Getting Skin Cancer?

Similar to the pink growth, WebMD explains that BCC can also look like a small little “pearly” bump that “looks like a flesh-colored mole or pimple that doesn’t go away.” These growths can resemble either the subtype of BCC known as pigmented or nodular BCC. If they are pigmented, they might appear dark in color, either blue, brown or black.

Healthline points out they can also be translucent, have a raised border, and are sometimes confused with a normal mole.

A growth that looks like wart is a symptom of SCC. It can be one of the earliest indicators of SCC and will resemble a raised, or dome-shaped, patch of skin. WebMD says these areas are typically “rough and crusty, and can bleed easily when scraped.” Often quite persistent in nature, the patches also tend to have irregular borders.

Cancer.net indicates that the raised skin growth could alternately take on the appearance of a wart. Unlike a regular wart, however, these sores will often crust over and bleed. The growth could also simply be a firm, red bump that doesn’t seem to disappear over time.

Growth on the Lower Lip

For those that smoke, use chewing tobacco, or regularly expose their lips to sun and wind, a common symptom of SCC is the development of “a sore that does not heal or an area of thickened skin on the lower lip,” says WebMD.

The sore could also appear as a raised growth with a central depression. The Skin Cancer Foundation indicates this area may sometimes bleed and has the potential to increase in size over a short period of time.