Signs and Symptoms of Kidney Cancer 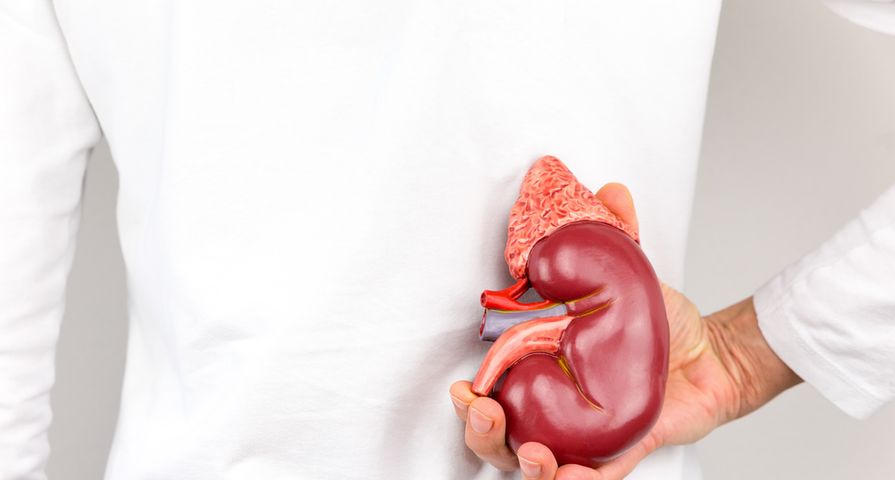 No matter your age, it’s important to be informed about dangerous illnesses like kidney cancer — a disease anyone can develop. Approximately 73,750 new cases of kidney cancer were diagnosed in 2020, with 14,830 people dying annually from the disease.

Lump in the Abdomen

A lump in the abdomen is most certainly cause for concern. A mass (or lump) that is caused by kidney cancer is typically found in either the abdomen, side (flank), or back. Healthline explains that it will most likely feel hard, thickened, or like a bulging bump under the skin, and it occurs in about 45-percent of people with kidney cancer.

This symptom doesn’t often present itself until the later stages because kidney lumps are hard to feel when they are small. This is because the kidneys sit so far back in the abdomen. “You may not even see or feel the lump as the tumor grows,” says Healthline.

Once a lump is discovered, a doctor will run diagnostic tests, such as an ultrasound or computed tomography (CT) to determine what the lump is and hopefully the cause. Remember, not all lumps are cancer. “In most cases a biopsy will be needed to confirm the diagnosis,” explains the source.

There are many reasons a person might begin to feel pain in their lower back, particularly those over the age of 40. It’s most commonly associated with musculoskeletal injury or disk degeneration, says Healthline, but it can also be a symptom of kidney cancer. “About 41-percent of people with RCC report back pain. But most people don’t experience back pain until the cancer is in the later stages,” writes the source.

The pain associated with kidney cancer can either be a dull ache or a sharp stabbing pain. It varies between patients. “Some people report pressure instead of an ache or sharp pain.” Either way, if you’re experiencing sudden pain that lasts longer than a few days, you should check in with your doctor to determine the cause.

It is usually localized either on one side of the flank or just below the ribs. Healthline explains that a “flank” is the area between the lower back and bottom backside of the ribs. Some people describe it as side pain, as well.

Bloods in the urine is typically referred to as hematuria and is one of the most common symptoms of kidney cancer, says Healthline. According to the Kidney Cancer Association it occurs in about 40 to 50-percent of patients.

Blood in the urine can be quite alarming and will most definitely be noticeable, even if it’s a tiny amount. “Even a small amount of blood can cause a color change such as pink, brownish, or even red,” writes Healthline. “The presence of blood can be inconsistent, appearing about every other day. Sometimes the amount of blood is so small it can only be detected during a urinalysis [microscopic examination of the urine],” adds the source.

The source also notes that blood in the urine doesn’t automatically mean you have kidney cancer. It could also be caused by a bladder or kidney infection, kidney stones, cysts, or injury to the kidney. No matter what the cause is, if you notice blood in your urine, you should consult a doctor.

We all feel fatigued from time to time, and most often it’s a result of a bad night’s sleep or an early morning and a busy day. When it comes to cancer, particularly kidney cancer, fatigue is one of the most common symptoms. Healthline explains that the fatigue associated with kidney cancer is different than just feeling tired. “Cancer-related fatigue is persistent and interferes with daily activities. It can also intensify as time goes on,” writes the source.

Unfortunately, fatigue tends to become even worse as treatment starts. Healthline notes that 70 to 100-percent of people who go through cancer treatments report fatigue as one of the side effects. “Many people with cancer say fatigue is one of the most difficult symptoms to manage,” says the source.

Anemia is another possible sign of kidney cancer as it affects roughly 21-percent of patients, says Healthline. This symptom is also sometimes referred to as a low red blood cell count. “Normally your kidneys signal your body to make red blood cells,” writes the source. “Cancer can interfere with that signaling. Anemia can also cause worsening fatigue, shortness of breath, dizziness, and pale looking skin,” adds the source.

Most of us would love to be able to quickly and easily shed a few pounds here and there, but unexpected weight loss is nothing to rejoice about because it typically means there is something more serious going on. In fact, it’s one of the early warning signs of kidney cancer.

Healthline notes that 28-percent of people with kidney cancer report weight loss. “This usually happens quickly, as the tumor spreads to other organs,” adds the source.

This symptom often occurs in relation to the previous slide on unexpected weight loss which can occur due to a loss of appetite (which is also due to kidney cancer). People who are suffering from kidney cancer might suddenly lose interest in eating which contributes to their weight loss, says Healthline.

The source also notes that a person might just have an “overall sick feeling,” which also discourages eating.

A fever is one of those tricky symptoms that cannot point to any illness or condition in particular when it appears on its own because it’s such a universal symptom. However, if you’re experiencing a fever that just doesn’t seem to be getting any better or keeps coming back in waves, then it probably isn’t due to a cold or other infection. It could be a result of kidney cancer, says WebMD.

Healthline also writes, “These fevers are usually not caused by an infection and commonly will come and go.”

Swelling in the Legs and Ankles

WebMD explains that oftentimes kidney cancer doesn’t show many symptoms in the early stages, but once the disease progresses and the tumor grows, the body will begin to exhibit signs, such as swelling in the ankles and legs.

Swollen Vein in the Scrotum

This symptom is specific to men who actually have a higher risk of developing kidney cancer. The Canadian Cancer Society says one of the symptoms in men is “a large swollen vein (called a varicocele) may appear suddenly in an older man’s scrotum if a kidney tumor changes the flow of blood to the scrotum.”

Is it Possible to Find it Early?

According to the American Cancer Society, it is possible to find kidney cancer early even though we’ve already stated that the symptoms don’t typically show up until the tumor has grown. More often than not, the cancer isn’t found until it’s reached a more advanced stage.

The source states the reason for this is because at first, kidney cancer can grow without causing much pain. The second reason it’s typically diagnosed late is that “the kidneys are deep inside the body, small kidney tumors cannot be seen or felt during a physical exam,” writes the source. Lastly, there are no screening tests that can pinpoint who is at risk or whether an at-risk person will develop kidney cancer.

Like many other cancers, there are specific factors that can increase a person’s risk of developing kidney cancer. Healthline lists the following as the most common risk factors, “age (as you get older, your chance of kidney cancer increases), smoking, obesity, high blood pressure, treatment for kidney failure, certain genetic or hereditary factors,” and male gender.

While there is no surefire way to prevent kidney cancer, there are some things that we can do to protect ourselves and reduce our risk. Healthline advises maintaining a healthy blood pressure through lifestyle choices like a healthy diet and regular exercise, as well as medication, if needed. You should also avoid smoking because exposure to “harmful carcinogenic substances can” increase a persons “chances of developing kidney cancer.”

If you are aware of any family history of cancer, keep on top of regular visits to the doctor and make note of any potential risk factors that could increase your chances of kidney cancer.