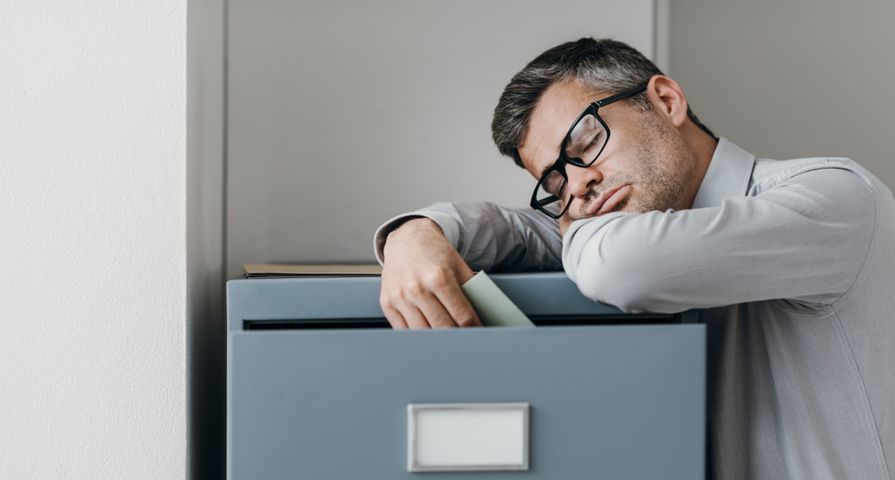 Are you overwhelmed with daytime drowsiness? Do you also suddenly fall asleep at random times throughout the day? You might be suffering from narcolepsy, a chronic sleep disorder.

Narcolepsy is often misunderstood but considering it impacts the lives of 135,000 to 200,00 Americans it’s important to know what it is and what you can do about it. To better understand this sleep disorder, we take a closer look at everything you should know about narcolepsy, including the common symptoms, causes, how it’s diagnosed, and what treatment options are available.

So, what is narcolepsy exactly? In short, narcolepsy is “a chronic neurological disorder that affects the brain’s ability to control sleep-wake cycles,” says the National Institute of Neurological Disorders. While narcolepsy sufferers may feel rested after waking, they can also feel extremely sleepy for most of the day.

In regular sleep cycles, we typically go through a series of stages before entering rapid eye movement (REM) sleep which usually occurs about an hour to 90-minutes after falling asleep. However, those with narcolepsy often enter REM sleep much earlier, within minutes after falling asleep. This is caused by changes in the brain that disrupt sleep cycles.

Narcolepsy can be broken down into two types including type 1 (NT1) and type 2 (NT2). NT1 is the most common type of narcolepsy. It involves a common symptom known as cataplexy, which is a sudden loss of muscle control. Healthline explains, “people with this type have episodes of extreme sleepiness and cataplexy during the daytime due to low levels of a protein called hypocretin.”

NT2 on the other hand is narcolepsy without cataplexy. Individuals with this type will experience similar symptoms as people with NT1, but they won’t experience cataplexy or low levels of hypocretin.

The telltale sign of narcolepsy is excessive daytime sleepiness. Many of us feel tired from time to time but those with narcolepsy will feel a sudden urge to sleep. Most times the urge will feel irresistible and it often happens during the most random situations.

The Sleep Foundation points out that the disorder can also cause sleep attacks which means you can fall asleep without warning. This symptom can seriously interfere with regular daily activities.

Sleep paralysis is another common symptom of narcolepsy, and it can be frightening especially the first time you experience it. For those that haven’t, sleep paralysis is a temporary inability to speak or move while falling asleep or waking up. Fortunately, it typically only lasts for a few seconds or sometimes minutes after which you’ll regain your full capacity to move and speak.

Narcolepsy can also trigger automatic behaviors. What happens is the individual may experience a temporary sleep episode but does so during an activity such as eating or talking. As this occurs, they can automatically continue the activity for a few seconds (or minutes) without being aware they are doing it.

The Sleep Foundation says, “for example, a student in class may continue writing but is actually just scrawling lines or gibberish on the page.” It’s most common during habitual activities such as writing/typing or driving which can be dangerous. Another interesting fact is the individual often feels temporarily refreshed after waking up from these episodes.

Cataplexy, a sudden loss of muscle control, is also common with narcolepsy but it only occurs in individuals with NT1, not NT2. The severity of cataplexy can vary from person to person. For example, one individual may experience drooping eyelids (known as partial cataplexy) while another may experience total body collapse.

Intense emotion, such as fear or excitement often triggers cataplexy. Some individuals will only experience it a few times per year while others may experience several episodes per day.

Symptoms of Narcolepsy in Children

While many symptoms of narcolepsy remain the same among adults and children, there are a few notable differences you should know. For starters, excessive daytime sleepiness is more likely to emerge as irritability or restlessness in children. This can often be mistaken as a behavioral issue.

The Sleep Foundation also notes, children with narcolepsy may also sleep longer at night and may have more active body movements. Finally, cataplexy is typically more subtle in children and often involves the face instead of the whole body.

Since narcolepsy can interfere with your daily life, it’s important you get it under control. With this in mind, if you notice any signs of narcolepsy you should book an appointment with your doctor.

The Mayo Clinic says “your doctor may make a preliminary diagnosis of narcolepsy based on your excessive daytime sleepiness and sudden loss of muscle tone (cataplexy).” However, after the initial diagnosis, your primary doctor will likely refer you to a sleep specialist.

The sleep specialist will first ask about your sleep history. The Mayo Clinic says “a part of the history involves filling out the Epworth Sleepiness Scale,” which includes a series of short questions to determine your degree of sleepiness.

You may also be asked to keep a detailed journal of your sleep patterns for a couple of weeks to help provide your doctor with more information. They may also ask you to wear an actigraph which is a small device (similar to a wristwatch) that measures your activity and rest.

Evaluating your sleep history and tests are essential in helping the doctors rule out other possible causes such as sleep apnea or chronic sleep deprivation.

To receive a formal diagnosis, the Mayo Clinic says you’ll have to stay overnight at a sleep center so that the sleep specialist can get an in-depth sleep analysis.

Several tests are used to diagnose narcolepsy. For starters, polysomnography measures the electrical activity of your brain and heart, as well as the movement of your muscles and eyes. A multiple sleep latency test measures how long it takes you to fall asleep.

Unfortunately, the exact cause is unknown, however, it is likely linked to a deficiency in hypocretin (also known as orexin), which is a chemical the brain requires to stay away. Medical News Today says narcolepsy could also be linked to genetic features and environmental factors.

The source also notes, “People with type 1 narcolepsy have low levels of hypocretin, but those with type 2 do not.” Finally, a brain tumor, injury, or other condition may also lead to narcolepsy.

For starters, you may need to plan short naps throughout the day. Since people with narcolepsy often feel refreshed after a short nap, you might want to schedule them throughout your day to help reduce excessive daytime sleepiness.

Next, establishing healthy sleep hygiene habits is a good way to combat poor sleep. Some good habits to create include a consistent sleep schedule for both going to sleep and waking up, creating a comfortable sleep environment with few distractions, and avoiding electronic devices before bed.

The Sleep Foundation says individuals with narcolepsy have an increased risk of obesity which means eating a healthy well-balanced diet is an important part of their overall health. If you need help establishing a healthy eating plan, talk to your doctor for a referral to a dietician or nutritionist.

The source also says regular exercise is also important for preventing obesity. It may also help improve your sleep at night too.

Since people with narcolepsy already have to deal with excessive daytime sleepiness, it’s best to avoid any substances that contribute to sleepiness. This may include alcohol or certain medications that cause drowsiness.

Individuals with narcolepsy should also talk to their doctor about safe driving. You may need to take a nap before driving and/or avoid long drives to avoid falling asleep at the wheel. Finally, be sure to seek out support groups. Managing narcolepsy can be a challenge and having a support group may help promote your emotional health.

Lifestyle adjustments can certainly be helpful, however, many individuals with narcolepsy also receive treatment with medications. The goal of the medication is to help control one (or more) symptoms.

Keep in mind these medications do require a prescription, and should be used “according to the instructions provided by a doctor and pharmacist,” says the Sleep Foundation. Talk to your doctor to find out if medication is the right treatment for you.