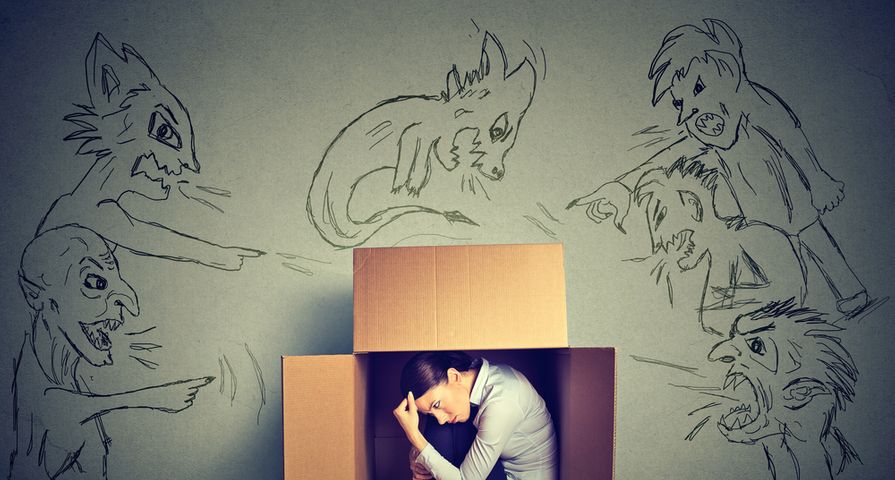 When it comes to medical conditions, they can be downright bizarre. From limbs that take on their own personality, to people believing they’re actually dead, to hearing imaginary alarming noises, there are many somewhat unknown and rare conditions that some people actually are dealing with.

These conditions can be either tied to physical or mental disorders, or both, and while they may seem like they’re out of a sci-fi or horror movie, they’re very real to those afflicted by them. Here are 13 of the most bizarre conditions known to medical science…

This condition is also called Cotard’s Syndrome, and it’s a neuropsychiatric disorder that makes the patient believe they are dead “or missing their soul, organs, blood, or certain body parts,” explains EveryDayHealth.com.

The source says that Cotard’s syndrome is a psychiatric condition tied to other mental illnesses such as depression, and that neuroimaging has also revealed changes in the brain in some cases. However, no cause of this condition has been found because it’s so rare, it adds, noting some patients “can also spontaneously experience a complete recovery.”

This condition is also called Dr. Strangelove Syndrome, named after the character in a 1964 film depicting uncontrollable hand movements, notes EveryDayHealth.com. It makes it seem like an outside force is controlling one of the patient’s limbs against their will.

“From time to time, when the other hand is engaged, the affected hand may hop in and try to interfere with that hand or do something counter to it,” notes the source, who cites a neuropsychologist familiar with the condition. This condition can be the result of medical trauma (such as a stroke) that affects the connection between the brain’s hemispheres, it adds.

This is a strange physical condition that creates a map-like appearance to your tongue, giving it its nickname. Although the condition is benign (harmless) according to WebMD, it can be troubling to the patient and possibly alarming to people seeing it.

The source says the telltale signs include “irregular, smooth, red patches on parts of the tongue,” which can move around and come or go. The appearance is caused by the disappearance of sections of the upper layer of the tongue (small bumps called papillae), but no one is sure why this occurs, says the source. Genetics may play a role, it adds.

The Mayo Clinic describes this as an “unexplained skin condition” that typically involves small fibers emerging from skin pores. The result is the patient feeling as if something is crawling on them, or even stinging their skin, it adds.

Doctors seem to be divided about what the condition really is – some believe it’s an infection of the skin cells, while other doctors believe it’s a “delusional manifestation” that can be treated with antidepressants and counseling, adds the source. In either case, there are physical signs – including skin rashes, sores, “threads or black stringy material in and on the skin,” as well as cognitive impacts such as difficulty concentrating and memory loss, it adds.

Imagine your brain was convinced that everyone you meet is actually the same person in disguise – and that they’re all out to get you. That’s the case with Fregoli syndrome (or Fregoli delusion), which apparently was the inspiration for a Charlie Kaufman film called Anomalia, says the Telegraph.

The origins of this condition date back to 1927, when two psychiatrists dealt with a patient that was convinced her favorite screen stars of the time (Sarah Bernhardt and Robine) were actually disguising themselves as friends, employers, and even strangers. The doctors named the condition Fregoli delusion, inspired by Italian entertainer Leopoldo Fregoli, “who thrilled Victorian Europe with his impersonations of luminaries of the day, including Gladstone, Bismarck and Victor Hugo,” it notes. The delusion has been observed in adults and children, it notes.

This condition is not only rare and strange, but it can also be deadly, according to Healthline.com. The condition causes the patients to eat their own hair, behavior that has an underlying psychiatric condition, it adds.

The source adds it mainly affects girls that are 12-and older, and can be fatal because hair is not biodegradable and can cause blockages in the digestive system. In fact, the site uses the example of a 16-year-old girl in the UK that died after eating her own hair over “several years,” which caused an infected hairball in her stomach. “Ultimately, a burst ulcer shut down the girl’s vital organs,” it adds.

More formally known as hypertrichosis, this is categorized by excessive hair growth on any part of the body. However, the hair growth can cover the face, giving the appearance of a fictional werewolf, says Healthline.com.

There are actually several types of this condition including congenital hypertrichosis terminalis, which begins at birth and continues through life, covering the patient’s face and body with long and thick hair. Other versions may develop later in life, and one version (hirsutism) only affects women, according to the source.

No, this isn’t a condition that causes a patient to watch the classic movie on repeat. Instead, the neurological syndrome (also called Todd’s syndrome) is defined by distortion of size and distance, and can be marked by migraine headaches.

“Episodes, which can last up to an hour, involve seeing objects or people as very big, very small, or further away than they actually are,” explains the source. Patients may also have hallucinations or misconceptions about the passage of time, and it typically strikes young children – not the type of bedtime tale parents had in mind for them.

This condition takes “blood, sweat and tears” to a new level, because it involves patients actually sweating blood, says WebMD. The source says 2-doctors have shared their experience with it, noting a young woman arrived at an Italian hospital “bleeding from her face for no clear reason.”

Apparently this woman had been bleeding from the face and palms spontaneously for 3-years, while going about her daily business or while sleeping, and seemed to get worse with stress. The doctors decided she had a rare condition called hematohidrosis, and treated it with a drug called propranolol that helps control the part of the nervous system that controls sweating. However, doctors still don’t understand the exact cause, it adds.

This condition apparently makes you see things that aren’t real, when your eyes lose their ability to see the real world. In other words, the patient will have visual hallucinations as a result of vision loss, explains the National Center for Advancing Translational Sciences.

Unlike some other conditions such as psychosis or dementia, patients with this syndrome realize their hallucinations are not real – whether they take the form of shapes and patterns, as well as people, animals, and other objects living or otherwise. These hallucinations can last for hours, it adds. “The cause of CBS is not well understood, but it is thought to be related to the brain continuing to interpret images, even in their absence,” it explains.

Stroke and other trauma to the brain can cause some strange outcomes, and one of them is apparently suddenly developing a foreign accent, explains EveryDayHealth.com. That’s because strokes – and other conditions such as multiple sclerosis – can cause damage to the part of the brain that controls speech, it explains.

However, just like as if you were trying to mimic a different tongue, “the accent usually isn’t very good and native speakers can recognize that it’s not authentic” in the case of Foreign Accent Syndrome, it adds. Speech therapy can be applied, but in many cases the condition can be long-term or permanent, it explains.

This, understandably, makes it tougher to move easily as it progresses. Even worse, this condition often starts in early childhood around the shoulders and neck, then spreads its way down the body. There’s no cure, and the treatments are limited, it adds.

No, it doesn’t actually cause anyone’s head to literally explode, but the condition makes the patient hear imaginary loud noises such as gunshots or explosions as you try to sleep, explains EveryDayHealth.com.

The source says there’s no pain involved, but the symptoms can understandably be alarming and disruptive and can strike people up to seven times per night (good luck getting a proper rest). The condition is likely linked to certain types of anxiety and insomnia – but the good news is telling patients what they have is not dangerous can reduce the symptoms in some cases, according to the source.