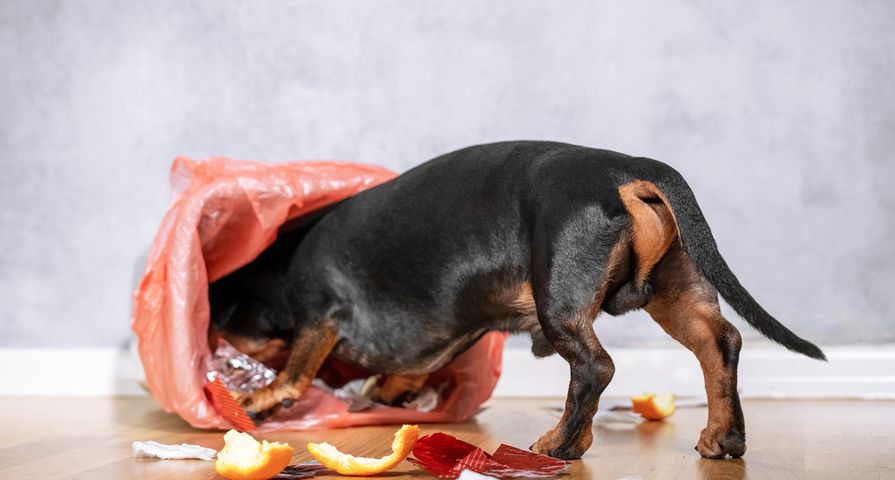 Dogs are considered part of the family. So it’s only natural that you want to give them the best home that you can. But while you strive to make a safe space for your family and your pets, are there some potential hazards you might be neglecting?

Some of these potential dangers could involve food that’s not dog-friendly, while other times it could be household chemicals or even toys mistaken as food that could pose a threat. Read on to find out how to better pooch-proof your home…

What could be the harm of feeding your dog a bit of chocolate while you’re baking? Well, it turns out chocolate tops some lists as the most dangerous food to give to your four-legged friends — especially dark chocolate and cooking chocolate.

The reason, explains Rover.com, is not because dogs are repulsed by the taste of chocolate. It’s actually because chocolate contains caffeine and theobromine, the latter from the cacao plant. The source warns these cause toxicosis which may lead to seizures and in worst cases, it can even be fatal.  Basically, it’s like poison for dogs.

Dogster.com says that while a tasty and nutritious treat for humans, your dog should not ingest grapes and raisins. The source explains these fruits have been linked to some cases of lethal kidney failure in canines.

However, the source also points out that it’s unclear whether the toxin is the fruit, or if it’s something else such as the mold that grows on it. Whatever the case, it’s best to avoid letting your pets have any grapes and raisins. In fact, it notes it might be a good idea not to have these food items in the house at all if you have a dog — and that includes raisin bread.

If you use medications, even over-the-counter (OTC) pain relievers, you’re going to want to keep them far away from your pets. That’s because according to the American Animal Hospital Association (AAHA), in 2018 alone, almost 20-percent of some 214,000-calls received by the American Society for the Prevention of Cruelty to Animals (ASPCA) were related to OTC ingestion of ibuprofen, cold medications, and even herbal supplements.

Meanwhile, prescription medications meant for humans such as antidepressants and heart pills are often consumed by animals, which can cause “significant side effects.” The source suggests keeping all medications (both OTC or prescription) in a medicine cabinet or up on a shelf that can’t be reached.

It’s commendable that you’re properly sorting all your garbage and recyclables. However, if you have a dog, you’ll want to take extra precautions to ensure they don’t get into it. Whether you keep your bins inside or out, be wary that a puppy might get curious about what’s in the pile.

The American Kennel Club (AKC) says that moldy food and animal bones can be especially harmful. It suggests turning your garbage bin lid inside out or flipping it over to cover the bin, making access more difficult. Other options are to separate the bins from the dog’s space with a gate or put them behind a closed door where they won’t be able to follow their nose.

Unless the label says otherwise, many cleaning products are safe to use in a home with pets. However, it’s a different story if you don’t follow the guidelines of the product. For example, sometimes you might have to let surfaces dry first — and your dog pays the price.

The American Veterinary Medical Association (AVMA) notes that products containing bleach can cause everything from vomiting/diarrhea to burning if ingested. There’s also a risk of chemical burns to the skin.

You’ve spent a lot of time and effort on your garden, and now have beautiful flowers blooming. However, while there are many varieties of flowers that you might’ve chosen for their aesthetic appeal, some can actually be harmful to your pet, points out the U.S. Food & Drug Administration (FDA).

Among potentially harmful plants/flowers listed by the FDA are aloe vera, chrysanthemum, daylily, hyacinth, peace lily, and hydrangea. The source explains that toxicity can vary depending on how much your dog ate, as well as which part of the plant was consumed. The ASPCA maintains a list of plants that have caused adverse effects in pets.

The National Library of Medicine says to be wary of any polyurethane adhesives in your household products. In particular, it says that many brands of wood glue are a major offender when it comes to adhesives that can harm rover. The source explains that “expanding” wood glues containing diphenylmethane diisocyanate (often abbreviated to MDI) can be especially dangerous.

It notes that eating an amount even as little as 2-ounces of adhesive can end up causing a solid mass that can block your dog’s gastrointestinal system. It warns that some expanding glues can end up swelling four to eight times the volume that was ingested within minutes.

If you have kids in the house, you have toys. And if you also have a dog, then you have a pet that will potentially eat the toys. While a toy with smaller parts might be safe for an older kid to play with, it doesn’t mean your pooch won’t try to sample some of these parts.

Rover.com says dog toys have been designed to not get lodged in their user’s throat. But the same can’t be said for a dog eating a kid’s toy. Balls and “other playtime pieces” can end up being life-threatening to pets, warns the source.

Your dog is a welcome guest in your home, but sometimes even smaller animals can arrive uninvited — such as mice and rats, as examples. While you can get rodenticides to try and curb the mouse population in your home, they can also be potentially harmful to your pets.

The AAHA notes that your dog might be tempted to eat the “tasty” bricks or pellets that are meant to take out mice and rats by means of internal bleeding and other fatal effects. With that in mind, it says don’t let your pets easily find these bait stations, and try to keep dogs in your yard so they don’t eat rodenticides on a neighboring property.

The AVMA says that auto fluids you might have stored inside or in a garage can also pose a major risk to your four-legged friends. It notes that even a small amount of antifreeze and coolants containing ethylene glycol can prove to be fatal.

There are other types of antifreeze containing propylene glycol, which is less toxic to animals but should still be considered dangerous, explains the source. While you’re putting away these items so your pets can’t get at them, also make sure to mind any gasoline you’re storing as it can also be dangerous to dogs, the source adds.

We’re going to assume you’re not willingly giving your pet gum to chew. However, if you like to chew on sugarless gum, you might want to be careful how you store it around pets due to the xylitol ingredient. Xylitol is a sweetener but not so sweet for your pup as it can be fatal.

It’s not just sugarless gum that contains the offending xylitol. Be sure to check the label of breath mints, cough syrup, chewable vitamins, mouthwash, toothpaste, OTC medications, and even some “skinny” sugar-free ice creams. Keep them well away from your pooch if you want to continue to enjoy them.

The AVMA warns of other hazards for dogs that may lurk in the bedroom or living room. One of them is “liquid potpourri” which, according to the source, can cause oral ulcerations and other health issues in pets.

Meanwhile, the source also mentions mothballs, which act as both a deodorant and a pesticide. However, it notes that “just one mothball” can sicken your dog (or cat), as they contain naphthalene. This can lead to a range of adverse effects from digestive tract irritation to swelling of the brain and seizures, it adds.