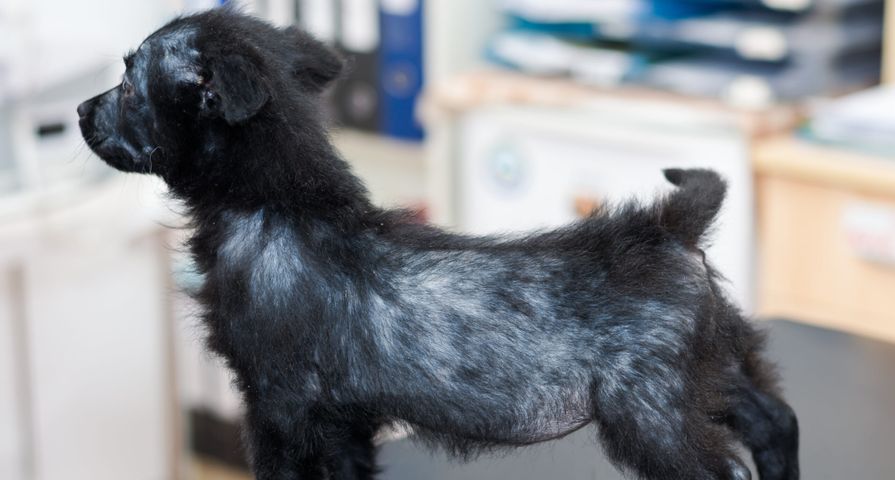 One of dogs most notable traits is their fur. Some have long fluffy hair, while others have short wiry fur. They also come in all different colors and beautiful shades, especially depending on the breed or mix of breeds. While they are all different, for the most part dogs are covered in it — head to toe!

Any pet owner knows that dogs love to be pet, stroked, and scratched. It’s also common knowledge that dogs will lose some fur, either due to normal shedding or seasonal hair loss. But what happens when a dog experiences unexpected hair loss? It can be quite alarming for owners. Here’s a look into the common symptoms, causes, and treatment options for dogs with alopecia…

Alopecia (also known as hair loss) in dogs is the same as it is in humans, it’s the partial or complete lack of hairs in areas where hair normal is present. Unfortunately, PetMD notes it a common condition in dogs. Don’t confuse this hair loss with normal shedding or seasonal hair loss — both of which are normal parts of certain dog breeds hair growth cycle.

When alopecia occurs, it will look much different and is often more noticeable. It’s the thinning of hair or spots of hair loss (bald spots), says PetMD. The reasoning behind this hair loss can vary. There are many different causes behind alopecia or hair loss in dogs, which we will explore next. 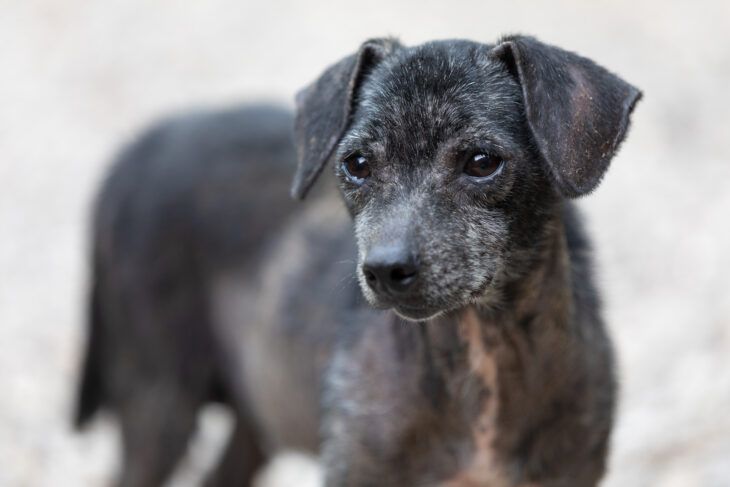 There are many different causes behind alopecia, but first we need to define the two categories of alopecia. There is congenital which means the dog was born with hair follicles that do not develop normally. In this case, the dogs alopecia is usually due to genetics and will occur when the dog is a puppy or in young adulthood, explains the Spruce Pets.

The second type of alopecia is acquired which means they were born with a normal coat and hair follicles, but are now suffering hair loss or baldness “due to damage to the hair follicles, issues with the hair shaft itself, of a slowdown in the normal hair-growth cycle.” 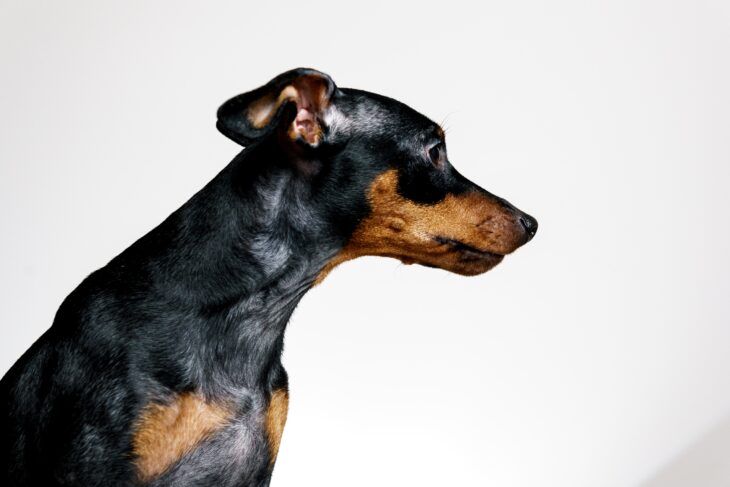 Symptoms of Alopecia in Dogs

The symptoms accompanying alopecia or hair loss in dogs can vary depending on the cause. This also goes for how the hair loss will occur. According to Merck Veterinary Manual, if the hair loss is congenital or hereditary, it’s often symmetric (appears on both sides of the body) or localized in one area only. There often is not any inflammation present.

If the hair loss is acquired or a result of other underlying causes, the source notes that it can vary more. It may be localized, symmetric, widespread, or in multiple different areas. “Inflammation, thickened skin, color change, scaling, excessive shedding, and itching are common,” writes the source. Sometimes the hair loss will lead to the development of other secondary skin diseases such as an infection or fluid discharge. The source also notes that itching isn’t always present and often depends on the cause. 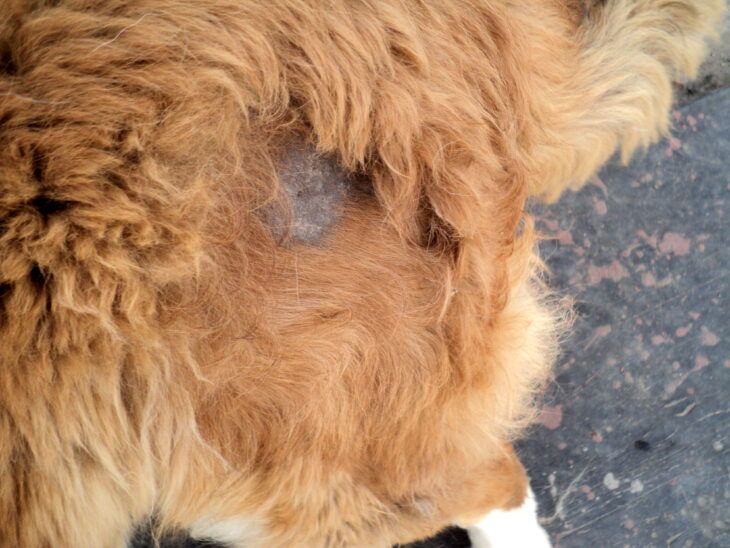 Causes of Alopecia in Dogs 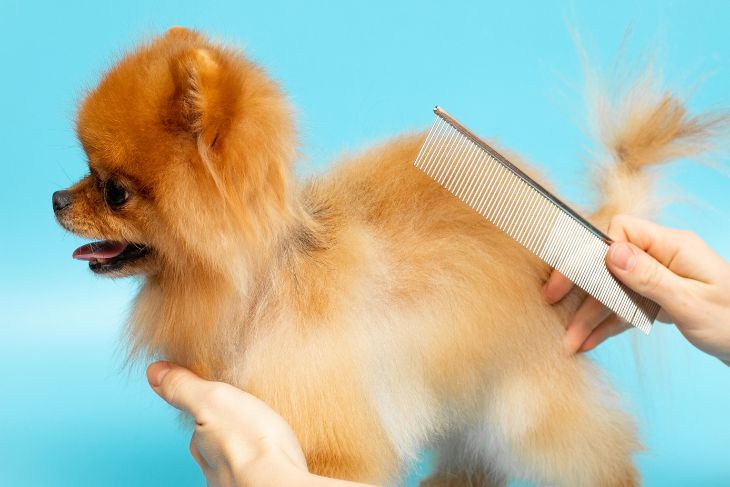 A dog can suffer hair loss as a result of allergies. Fetch by WebMD explains that similar to people, dogs can suffer an allergic reaction to foods and environmental triggers such as pollen, parasites, fleas, or mites. In fact, the most common allergy for dogs is flea bites.

If a dog is suffering from flea allergies, they’ll likely experience hair loss as a result of excessive licking and biting. The irritated areas will be itchy and red. “For a particularly allergic dog, it may take as little as one flea bite to start an allergic reaction that lingers for days,” writes the source. Even though all dogs can have allergies, some dogs are more prone to them than others.

This form of hair loss is treatable. Depending on what the allergy source is, it will likely involve a topical or internal medication, possibly allergy shots, a change in diet, as well as avoiding the allergen altogether. 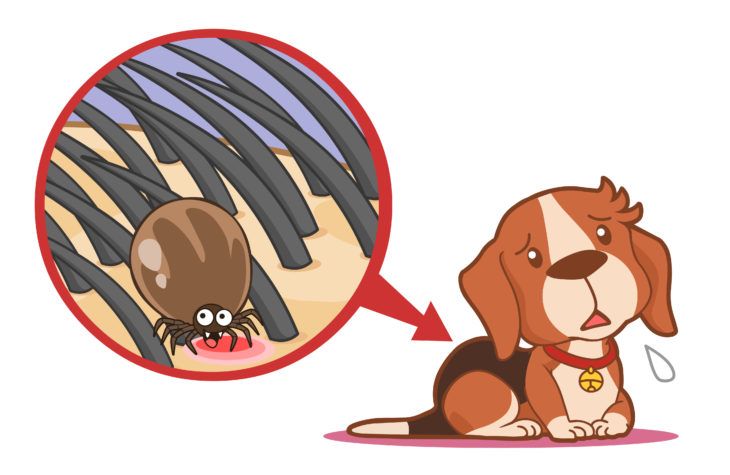 Hyperadrenocorticism, also known as Cushing’s disease (or Cushing’s syndrome) is a condition caused by the overproduction of the hormone cortisol, explains Fetch by WebMD. This condition may also cause hair loss in dog.

Pet owners should take note if their dog is displaying any signs of Cushing’s disease, such as eating, drinking, panting, and urinating more than usual. Also if they have a pot bellied appearance. This is especially important for dogs over the age of 6 who are at a higher risk. It can sometimes be treated with surgery or medication. If a dog is showing any signs of the above symptoms, take them to a vet. 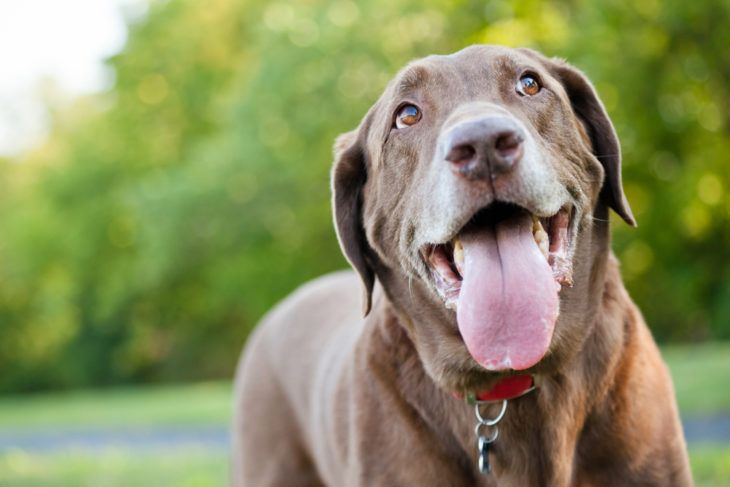 Hypothyroidism in dogs is the same as it is in humans. It’s when the thyroid gland doesn’t make enough of the hormone called thyroxine. This hormone is responsible for controlling the metabolism and can directly effect a dogs fur.

Fetch by WebMD explains that while it affects all dog breeds, it’s most notable in medium or large breeds such as golden retrievers, Doberman pinschers, Irish setters, dachshunds, boxers, and cocker spaniels. The source also notes that it tends to occur in middle-aged dogs between the ages 4 and 10. Neutered males and spayed females also have a higher risk, although it’s unclear why. 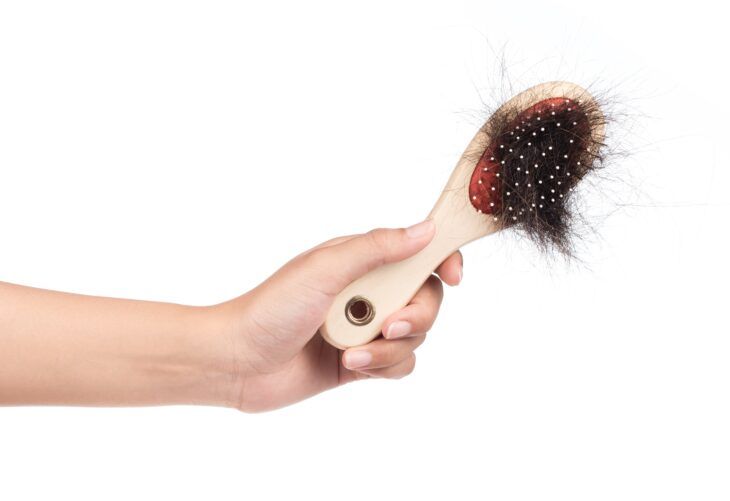 Sometimes alopecia or hair loss in dogs is a result of genetics so there’s really nothing pet owners can do. In fact, there are some “hairless” dogs like the Chinese crested and Mexican hairless, explains PetMD. Other times the hair loss is simply because that specific breed of dog is more prone to it.

According to PetMD, when hair loss occurs as a result of genetics in dogs like greyhounds, whippets, Chihuahuas, dachshunds, and Italian greyhounds, bald spots will appear on the outer ear, belly, thighs, or lower neck in the first year of their life. There is no treatment available, so as long as a vet rules out all other potential causes, owners just learn to live with it and manage the hair loss. 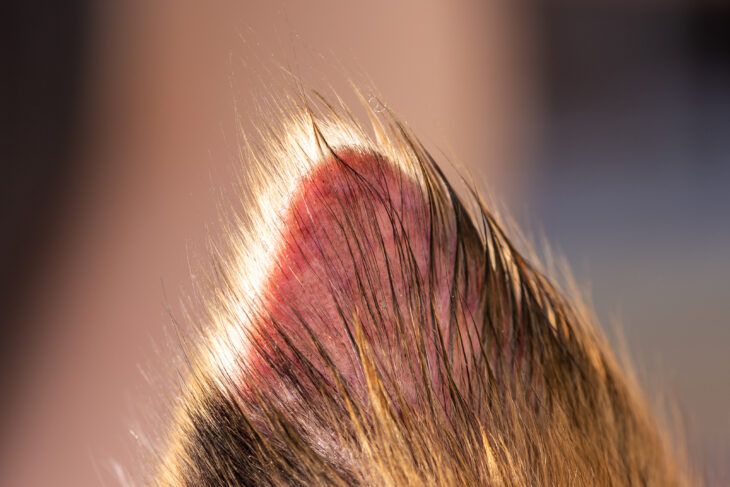 Dogs can suffer hair loss as a result of a ringworm or bacterial infection, or an infestation of mites. According to Fetch by WebMD, ringworm fungus, mites, and bacteria can all cause infections that may lead to hair loss or bald spots on a dog. In addition to hair loss, mites can cause a dogs skin to become oily, thickened, itchy, and inflamed.

If they are suffering from ringworm, which is a contagious infection of haired skin and claws, they’ll have circular or irregular hair loss, as well as inflammation on the skin and infected crusts. “Although small ringworm lesions may clear up spontaneously, it is contagious and should be treated,” warns the source. Ring worm is often treated with a topical anti fungal medication. If the case is severe, they may need an oral anti fungal medication.

Fetch by WebMD also notes that mites can often be treated with a topical or oral medication and secondary bacterial infections will require antibiotics. 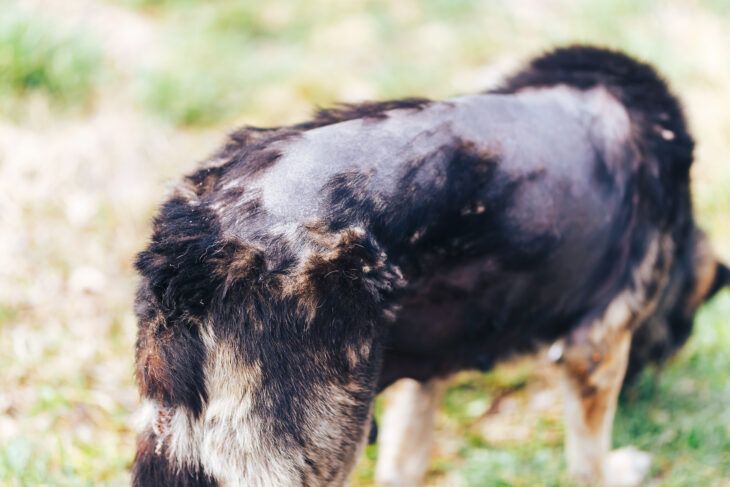 Pressure sores can occur in older or heavy dogs. You’ll often seen these sores on parts of their body that come into regular contact with hard surfaces like the elbows or other bony parts of the body, says Fetch by WebMD. “Over time, the constant pressure tends to thicken the skin, the hair falls out, and calluses form,” writes the source.

These sores result in hair loss and should be carefully monitored as they can crack, bleed, or get infected. Fetch by WebMD warns that treatment might be needed for pressure sores. This may include moisturizers, antibiotics, or even some bracing. Pet owners can try to prevent pressure sores by offering their dog a soft, cushion bed to lay on. 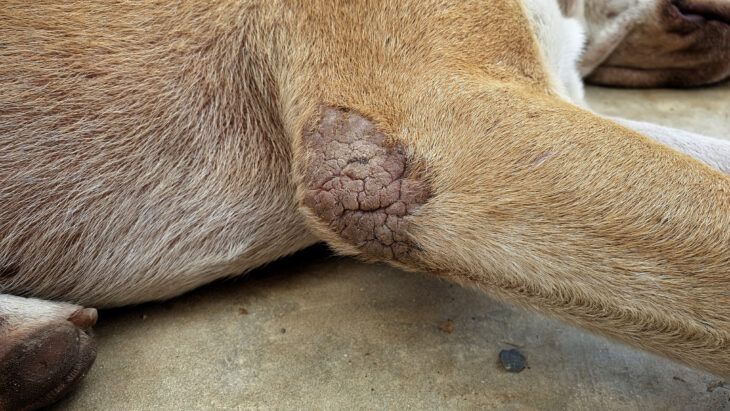 Dogs are susceptible to rashes and hives on their skin which can lead to hair loss. Insect bites, stings, medications, plants, chemicals, and depending on how sensitive their skin is, some shampoos can cause a dog to develop a rash or hives, says Fetch by WebMD.

If a dog is having an allergic rash it will usually appear minutes to hours after their exposure, notes the source. It will also be accompanied by other symptoms like listlessness, fever, lack of appetite, and vomiting. If this is the case, take them to a vet as soon as possible as they might need emergency treatment. 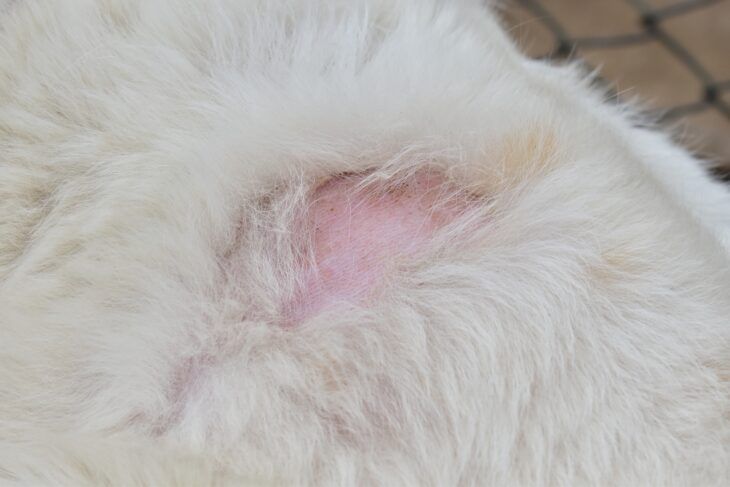 While alopecia can occur in any dog, certain breeds are predisposed to specific types of congenital alopecia. American Water Spaniels, Boston Terriers, Boxers, Chihuahuas, Dachshunds, Greyhounds, Manchester Terriers, Portuguese Water Dogs, and Whippets are all prone to pattern baldness, according to the Spruce Pets. 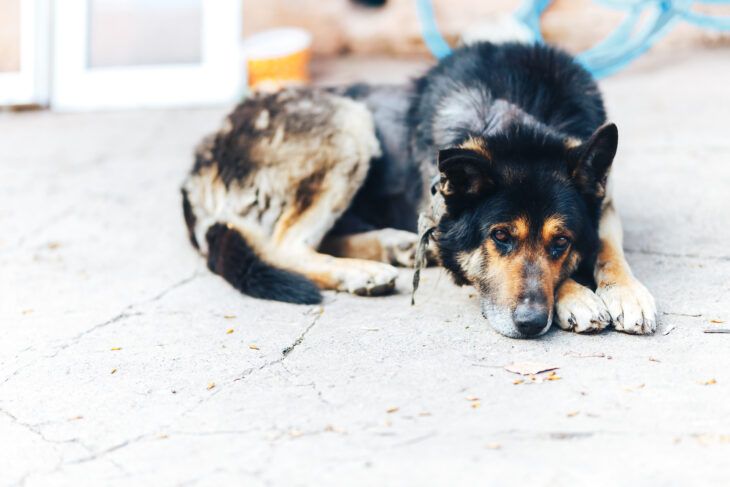 In order to receive a diagnosis, a dog must go see a veterinarian. PetMD warns owners that skin disorders in dogs are rarely ever a quick fix. A vet needs to take many factors into consideration when making a diagnosis, including age gender, breed, health status, and prior medical history.

Next, they’ll do a physical examination. They’ll first look for evidence of fleas, ticks, or saliva-stained areas (feet, tail base, and flanks). Depending on what they find, the source notes they’ll likely recommend more testing which could include any of the following: skin scrapes, cultures, tape preps, black light and/or fungal cultures, ear smear, food trials, skin testing for allergies, blood tests, fecal exam, and biopsy. 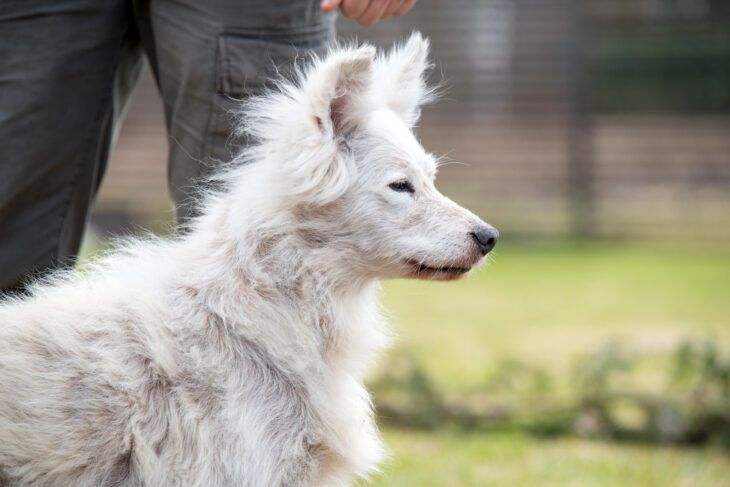 Treatment Options for Dogs with Alopecia

Unfortunately there is no simple answer to treating alopecia in dogs. The method of treatment will largely depend on the cause, explains PetMD. If it’s simply a cosmetic issue, often no treatment is needed. Although there are many forms of congenital alopecia where there is no effective treatment other than keeping the skin moisturized to avoid dryness, says the Spruce Pets. 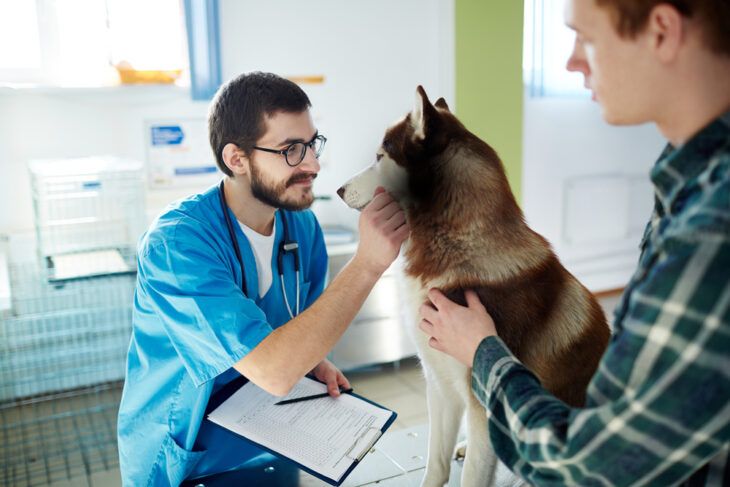 Once the cause behind the alopecia is identified, PetMD suggests owners avoid it moving forward. This will help aid the dogs recovery and prevent the condition from getting worse. If the cause is unavoidable, there are still things they can do to help. For example, PetMD advises keeping the dog well groomed, provide them with regular flea control medication, and avoid allergens.

While alopecia is not a pleasant thing for pets or owners to deal with, the Spruce Pets also reassures owners that it does not effect on a dog’s life span or their quality of life. For the most part, it’s simply a cosmetic issue. 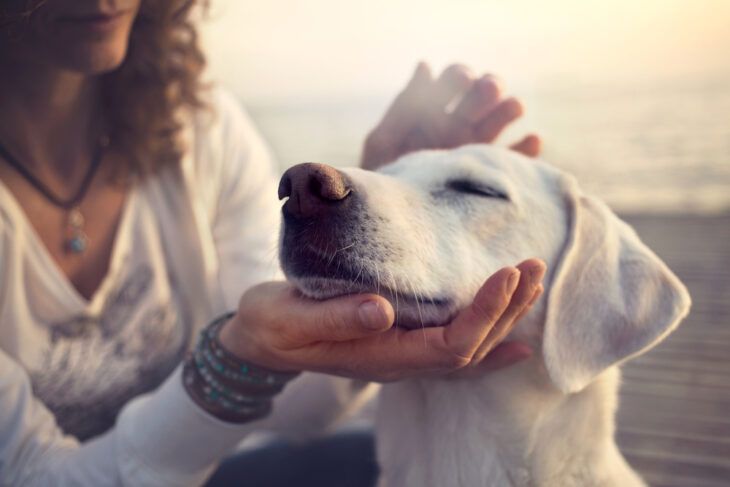