The Incredible Health Benefits of Dates 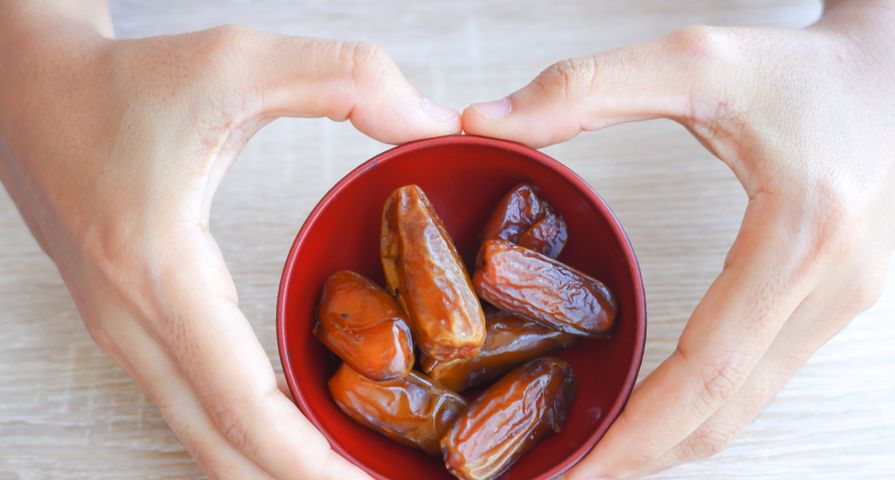 When was the last time you had a date night? No, not that kind of date – the kind that you eat. And as it turns out, dates are not only delicious and versatile (you can eat them on their own or as part of a recipe), but also offer a host of health benefits as an evening snack or in a daytime meal.

From a healthy dose of dietary fiber to being a source of antioxidants that can help protect against disease, here are some naturally sweet reasons to reach for dates the next time you have a snack craving.

They’re Packed With Vitamins and Nutrients

When you bite into a date, you’re getting a lot of vitamins and minerals along with the tastiness. For example, according to Healthline, dates contain 20-percent of the recommended daily intake (RDI) of potassium, 15-percent RDI for manganese, 14-percent RDI of magnesium, and 12-percent RDI for vitamin B6.

The source also says dates are a source of iron and copper, along with fiber and protein. While the fruits are often higher in calories than other types of fruit – with the majority of those calories as carbs – this is offset by all the goodness dates contain, notes the source.

All of those vitamins and minerals in dates mean good things for your body, and your bones are no exception. According to Shape, dates are actually a good way to maintain your bones despite not containing much calcium or vitamin D (that are usually the go-to for this type of thing).

However, they do have significant magnesium and manganese content, which are also champs at keeping your bones strong while reducing risk of breakage, notes the source. Studies cited by Shape also shows that magnesium plays a vital role in bone formation.

Could Protect From Cancer

Antioxidants are something you might’ve heard about along the line, but wasn’t sure what the benefit was. Dates are high in “protective” antioxidants according to Health.com, which can help prevent a number of diseases (such as cancer) from oxidative stress caused by “free radicals” that damage cells, it adds.

The source notes that an imbalance of free radicals and counteracting forces can increase chances of disease, while also being a “precursor to aging.” It explains that dates contain a wide range of these antioxidants, including carotenoids, polyphenols, and tannins (yes, like the ones in red wine).

According to WebMD, the fiber content of Medjool dates in particular can help get your bad cholesterol (LDL) countdown. It explains that the soluble fiber of dates “binds” with problem cholesterol and prevents it from being absorbed into the bloodstream.

The source adds that because of this effect, it’s less likely for fatty deposits to build up in the arteries that can lead to heart disease. High LDL has also been linked to a higher risk of stroke and other potential ailments, it explains.

If you’re often feeling a bit tired and worn out, it might be from your metabolism. WebMD says that B-vitamin content in dates could help the “metabolic processes that convert food to energy,” which could in turn put some more spring in your step.

Speaking of metabolic issues, the source also explains that because dates can help slow sugar absorption, it may be a way to control blood sugar while reducing metabolic disorders like diabetes.

If you suffer from constipation, there are few things better than dates to get things moving again. Health.com notes dates are good for overall digestive health, providing about 18-percent of the RDI for fiber, which can add volume to stool and control blood sugar.

The source cites a study that looks at the impact of dates on gut health. It says groups of healthy men were assigned to eat either 7-dates per day or a “control addition of a carbohydrate and sugar mixture” for 21-days. The groups switched after a 14-day period. “Researchers found that while eating dates, the study subjects experienced improvements in their bowel movement frequency and a reduced level of stool chemicals known to damage cells and trigger mutations that may lead to cancer,” it notes.

A Healthy Substitute to White Sugar

Healthline says if you’re looking for a sweet snack but want to avoid added sugars, then dates are your friend. The source says dates are high in fructose, which is a naturally occurring type of sugar in fruit. “For this reason, dates are very sweet and also have a subtle caramel-like taste,” it adds.

Dates also make a great substitute for sugar in recipes. For example, it notes, is to make date paste as a replacement. All you’ll need is some dates, some water and a blender. The source even links to a date paste recipe to help you out.

Could Aid With Brain Health

If you have dates on the brain, then your brain may thank you for it. Health.com says that “protective compounds” in dates may not only protect against certain physical health issues, but also potentially guard against deadly Alzheimer’s disease as per a study published in Neural Regeneration Research.

The reason, says Health.com, is that dates can help reduce inflammation and oxidative stress on the brain. Healthline backs this up by noting lab studies have suggested dates can lower “inflammatory markers” that are associated with neurodegenerative diseases. It adds that animal studies show the fruit can reduce the chance of brain cell death caused by “plaques” in the brain formed by certain proteins, while also improving learning ability in mice.

Pregnant people take notice: according to studies referred to by Healthline, eating dates could ease late-term labor. “Eating these fruits throughout the last few weeks of pregnancy may promote cervical dilation and lower the need for induced labor. They may also be helpful for reducing labor time,” it explains.

One of the studies involved a group of women who started eating dates every day beginning in week 37 of pregnancy, who were in active labor for an average of four fewer hours than those who didn’t eat them, the study found. The reason for the benefits may be from “compounds that bind to oxytocin receptors and appear to mimic the effects of oxytocin in the body,” adding that oxytocin is a hormone responsible for contractions during childbirth. However, the source says more research is needed to confirm these benefits, so don’t rely entirely on dates for an easier delivery.