A Guide to the Best Wheat-Free/Gluten Free Flours 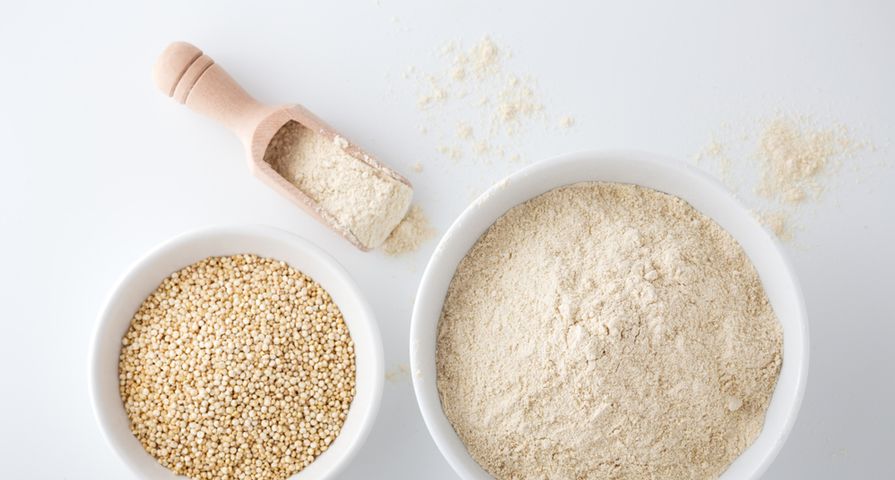 Are you interested in experimenting with gluten free and wheat free baking? With so many options for wheat flour alternatives out there, it’s hard to know what’s what or what type of flour to use for what purpose.

To help provide a little education and get your kitchen experiments started we’ve created this handy guide to 15 popular wheat free, gluten free flours. Most are fairly easy to find in supermarkets and health food stores these days, so after reading you’ll be ready to pick some up and put an alternative flour to work right in your own kitchen!

Almond flour is made from finely ground blanched almonds. Since it contains no wheat or grains it is a popular baking flour for those on low-carb diets. Similar to cornmeal, the texture is more crumbly than a fine wheat flour.

Because almonds are high in polyunsaturated fats, this flour should be stored in the fridge or freezer. Because almond flour is simply ground nuts, it has a very high fat content, which should be taken into consideration. Remember, gluten free doesn’t necessarily mean healthier or that we can binge on things made with alternative flours. Moderation is always key.

Amaranth flour is made from the seed of the Amaranth plant, which is actually a leafy vegetable. Amaranth seeds are very high in protein, meaning this flour is rich in plant-based proteins. Not only that, Amaranth is also high in the amino acid lysine, which helps your body absorb calcium and the seed actually has twice as much calcium, ounce for ounce, as cows milk.

It was widely used by the Aztecs and Inca civilizations who are thought to have given the plant its name which was derived from the Greek term for ‘immortal’ or ‘everlasting.’ Some alternative names for Amaranth are African spinach, Chinese spinach, Indian spinach and elephant’s ear.

Arrowroot flour (also known as arrowroot starch) is ground from the root of the highly starchy Arrowroot plant. This starch is easily digestible and is very useful for thickening recipes and is also used for gluten free baked goods.

It is tasteless, and the fine powder becomes clear when it is cooked, which makes it especially ideal for thickening clear sauces. The Arrowroot plant is native to South America where it has long been used in place of wheat flour in recipes.

Brown rice flour has a slight nutty taste, which will sometimes come out in recipes depending on the other ingredients used, and the texture will also contribute to a heavier product than recipes made with white rice flour. It is not often used on its own because of its heavier nature, but works well as a blend with other flours.

Despite its name, Buckwheat is not a form of wheat but rather it is actually related to the rhubarb plant. The small seeds of the plant are ground to make buckwheat flour which has a strong nutty taste. Because of this it is not generally used on its own in a recipe, as the taste of the finished product can be very overpowering, and even a little bitter.

Buckwheat is a highly nutritious alternative to wheat flours as it is rich in fibre, protein, B vitamins and complex carbohydrates. Some alternative names for Buckwheat flour are beech wheat, kasha and saracen corn.

Chickpea flour (also known as Garbanzo flour) is made from ground chickpeas and lends a sweet rich flavour when used in gluten free baked goods.

Since chickpeas are high in protein, dietary fibre and iron, chickpea flour packs a nutritional punch when compared with refined wheat flour. It’s a popular flour for use in Middle Eastern and Indian cooking and works well in cakes, crackers, pizza crusts and other baked goods.

Coconut flour has become a popular option for gluten free cooking and baking. It is made from grinding the dried coconut solids which are left over after the process of making coconut milk.

Coconut flour is low in carbohydrates and cholesterol and high in fibre with a light coconut flavour, but coconut has been shown to contain high amounts of saturated fat. Coconut flour behaves a bit differently in baked goods and can be difficult to substitute into recipes because it absorbs so much liquid. Typically, additional liquid will be required in a recipe that uses coconut flour.

These are two very different forms of the same food. Cornflour (also known as corn starch) is a fine white powder milled from corn and is used for thickening recipes and sauces. It has a bland taste, and therefore is used in conjunction with other ingredients that will impart flavour to the recipe.

Cornmeal is also a ground form of corn but is heavier than cornflour, with a grainy texture. It’s most often used in cornbread and other baked goods. While both are derived from corn, they are not generally interchangeable in recipes.

Millet comes from the grass family, and is used as a cereal crop in many African and Asian countries. It was first farmed nearly 10,000 years ago making it a truly ancient grain. Millet was even mentioned in the Old Testament, the writings of Herodotus, and the journals of international explorer Marco Polo!

Its ground form, Millet flour, can be used to thicken soups and make flat breads and griddle cakes. While Millet flour is a good source of protein, dietary fibre and amino acids, it lacks any form of gluten which means it’s not suited to many types of baking.

Potato Starch Flour is a fine white flour made from potatoes (similar to corn starch/flour), and has a light potato flavour which is virtually undetectable when used in recipes.

Given that it does not contain much perishable fats or protein, it’s one of the few alternative flours that keeps very well provided it is stored in an airtight jar, and somewhere that is cool and dark. Most alternative flours require being kept in the fridge or freezer to avoid spoilage.

Quinoa, one of the most popular supergrains of the last decade, is related to the plant family of spinach and beets. It has been used for over 5,000 years as a cereal, and the Incas called it the “mother of all grains.”

Quinoa flour is amongst the most nutritious grain flours available as it provides a good source of complete protein and provides all of the essential amino acids. Quinoa flour is made by grinding the seeds of the quinoa plant until a fine powder is achieved.

Sorghum might first sound like some sort of artificial ingredient you wouldn’t really want to bake with, however it’s actually a type of grain that originated in Africa thousands of years ago.

Sorghum flour is made from grinding the whole sorghum grain, which is similar to millet, and the resulting flour is a great source of protein and dietary fibre. The flour has a smooth texture that works well as a substitute in most baking recipes which call for regular wheat flours, including cookies, cakes and breads.

Tapioca Flour (also known as Tapioca Starch) is made from the starch of the root of the cassava plant, once ground it takes the form of a soft, fine white flour. Tapioca flour has a slight sweetness and adds chewiness to baking and is also a good thickener.

Tapioca flour helps bind gluten free baked goods and is an excellent addition to any wheat free kitchen. Like potato flour, it’s a fairly resilient flour, so storing at room temperature is no problem.

Teff comes from the grass family, and is a tiny cereal grain native to northern Africa. The grain is so small that it ranks as the smallest known grain in the world (even smaller than a poppy seed.) It is ground into flour and used for baking and thickening. Teff is also used to prepare injera, which is a spongy, slightly sour flatbread traditional to Ethiopian cuisine.

It is now finding a niche in the health food market because of it’s attractive nutritional profile. Teff is high in protein, iron, calcium and fibre. While all this makes Teff flour sound like a dream alternative to traditional wheat flour, it’s important to note that Teff has a fairly distinct, nutty flavor and is best suited in recipes where other bold flavors will stand up against it.

White Rice Flour is milled from polished white rice making it fairly bland in taste, and since it is refined, it’s not particularly nutritious. However, it does serve as a good option for gluten free baking and is ideal for recipes that require a light texture, similar to the results achieved with traditional wheat flour.

White rice flour can be used on its own for a variety of recipes or it can be  used with brown rice flour to add more fibre to recipes. This flour has a reasonable shelf life, as long as it is stored in an airtight container to avoid it absorbing moisture from the air.