Factors That Can Raise Your Blood Sugar 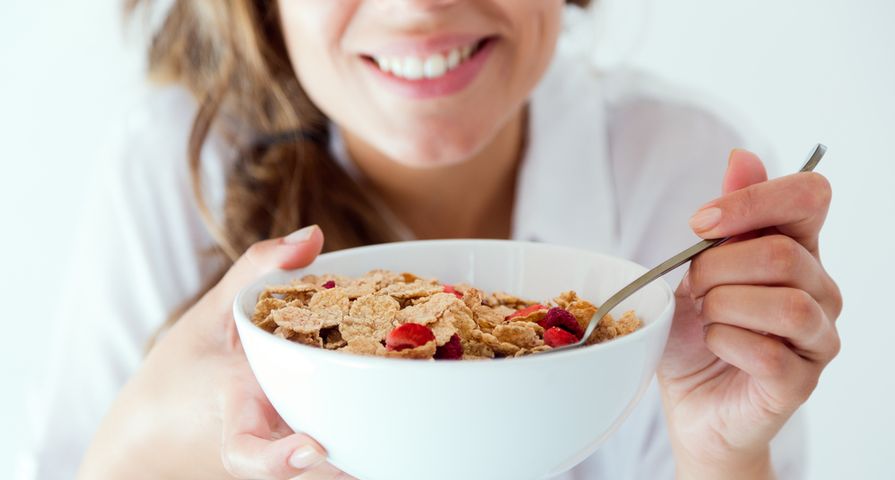 When it comes to raising blood sugar, the first thing that comes to mind is likely sugary treats and snacks — basically anything delicious! You probably already know these types of foods should only be enjoyed in moderation, but you might be surprised to learn that sugar, carbs, and everything delicious isn’t the only thing that can spike blood sugar.

Caffeine in coffee (and other high sources) can wreak havoc on your blood sugar levels, according to EveryDay Health. It points to research published by the American Diabetes Association that found too much caffeine can cause a spike in blood sugar in those who already have diabetes.

It adds that up to 400-mg of caffeine per day is generally safe, but warns that caffeine can affect how glucose behaves and consequently your blood sugar levels. “You may notice blood sugar swings after drinking only two 8-ounce plain cups of brewed coffee,” it notes. Meanwhile, other research has shown that drinking 3 to 4-cups of Joe per day can actually reduce the risk of developing type 2 diabetes to begin with.

Lack of sleep can have all kinds of negative health impacts, but what you might not have considered is how it can affect your blood sugar levels. The National Sleep Foundation explains that the medical community has known for years that lack of sleep affects your body’s ability to metabolize glucose.

It points to research that involved limiting sleep of healthy adult participants to 4-hours per night for 6-nights. The result was their ability to break down glucose was 40-percent lower, “reaching levels that are typical of older adults at risk for diabetes,” it adds. The insufficiently rested subjects also had a more sustained spike in blood sugar after consuming a high-carbohydrate breakfast than rested subjects, it adds.

Your blood sugar can rise and fall with the thermometer to a certain extent. EveryDay Health notes that if it’s “swelteringly hot or bitterly cold outside,” it can interfere with your diabetes management. “People with diabetes vary in the way their body responds to heat,” it adds.

Blood sugar may rise in diabetics as heat puts more stress on their system, while others may actually see a drop in blood sugar, it explains. “High temperatures cause blood vessels to dilate, which can enhance glucose absorption and potentially lead to low blood sugar,” it adds.

If you don’t put real sugar in your body, then your blood sugar won’t rise, right? Not so much, according to Reader’s Digest. It explains that an Israeli study shows that even fake sugar can have a “negative toll and are one of the foods that raise blood sugar.”

The testing on mice shows those given artificial sweeteners had blood sugar levels higher than even those given the real thing, it adds. Antibiotics were shown to bring down blood sugar in the test subjects that had been given artificial sugars, which leads the researchers to believe these sweeteners alter gut bacteria and in turn how the body processes glucose. “It is recommended to drink drinks with artificial sweeteners in moderation,” says Julie Ching, a registered dietician and certified diabetes educator.

Dehydration is another potentially deadly condition that can easily be avoided for the most part, but it can happen to almost anyone on a hot day if you’re not prepared. EveryDay Health says as your fluid levels drop, your sugar levels can become more concentrated, leading to hyperglycemia (high blood sugar).

What’s more is that high blood sugar can trigger your body to urinate more often, which can lead to dehydration. Bring water or sports drinks with you on a walk outside or stick to the 8-glasses of water a day guidelines, especially if you’re diabetic, it suggests.

We get it – you’re in a hurry, you have limited time in the morning to eat and get your kids to school before you head to the office. However, eating an insufficient breakfast or skipping it altogether can have negative consequences for your blood sugar.

Reader’s Digest explains a study from 2013 shows overweight women in particular who skip breakfast had higher levels of glucose and blood sugar after eating lunch a few hours later than on days when they consumed breakfast first. “Try to get some proteins and healthy fats into your morning ritual,” recommends Ching.

There is something that happens in all of us called the “dawn phenomenon,” which is a surge of hormones produced early in the morning before you even wake up. “People with diabetes don’t have normal glucose level responses to adjust for this, and may see their fasting glucose go up,” explains the American Diabetes Association.

Reader’s Digest says that if you have diabetes in particular, it’s not just carb-counting that’s important – you should also be aware of the fat content of your foods, as fats can cause resistance to the hormone that regulates glucose in the blood.

The source points to a 2011 study from Journal of Nutrition that involved subjects consuming a “fat-containing beverage” that had similar properties to a fatty meal. They then drank a sugary drink 6-hours later. The result was blood sugar levels that were 32-percent higher than if they didn’t have the fat-loaded drink first. “It seems that high levels of fat in the blood affect the body’s ability to clear sugar from the blood as well,” it concludes.

Unfortunately, along with all of the other unpleasantries that can accompany a period, blood sugar levels can be affected as well due to hormonal changes, says EveryDay Health.

It adds that some diabetic women may become less sensitive to regulating glucose levels leading up to their period, which can cause glucose levels to climb more freely. “Readings typically return to normal once menstruation begins,” it adds. The source suggests trimming back on carbs for the week leading up to your period, or trying to step up exercise during that time.

We don’t need to tell you all the health problems that have been linked to smoking, but we’re going to anyway. One of them is potentially high blood sugar, especially for diabetics, says Reader’s Digest.

The source points to a 2011 study from California State Polytechnic University that found blood samples exposed to nicotine raised the blood’s A1C level, which is a marker for average blood sugar control for 3 months. These levels rose with the amount of nicotine exposure. “These high blood sugar levels increase the risk of serious diabetes complications, such as heart attack, stroke, and kidney failure,” it warns.

Common infections that cause colds, flu, or urinary tract infections can lead to irregular blood sugar levels. This is because of the effect of “germ-fighting chemicals” your body releases in response to infections.

The body treats illness much the same way as stress, and that means the liver produces more glucose to provide you with more energy. Meanwhile, stress hormones that are released can make your cells more resistant to regulating glucose in the blood. “Whether a person has diabetes or not, generally blood sugar will rise dramatically when you’re ill,” says Ching. “People who have diabetes will generally see a spike because the pancreas isn’t producing enough [of the hormone that regulates glucose in the blood].”

You may be getting excited about the coming summer months – and those in the northern part of the U.S. should be, as it’s been a long, unpredictable winter (and spring). However, you should make sure to take all the precautions when greeting the big orb in the sky, because getting sunburned can lead to higher blood sugar.

The Mayo Clinic says that getting burned by the sun can put stress on your body, which we’ve already noted can result in higher glucose levels (not to mention lead to possible dehydration). “Wear a good sunscreen, sunglasses and hat when out in the sun,” it suggests.

EveryDayHealth.com says that both prescription and over-the-counter drugs that treat conditions other than diabetes can be messing with your blood sugar levels. For example, steroids for inflammation and asthma “can cause blood sugar to shoot up dramatically,” it says.

Other drugs that can affect blood sugar include antidepressants, diuretics, nasal decongestants, and even birth control pills, it adds. You should talk with your doctor about new medications and whether they will affect diabetes management, it suggests.