Common Tests to Expect During Pregnancy 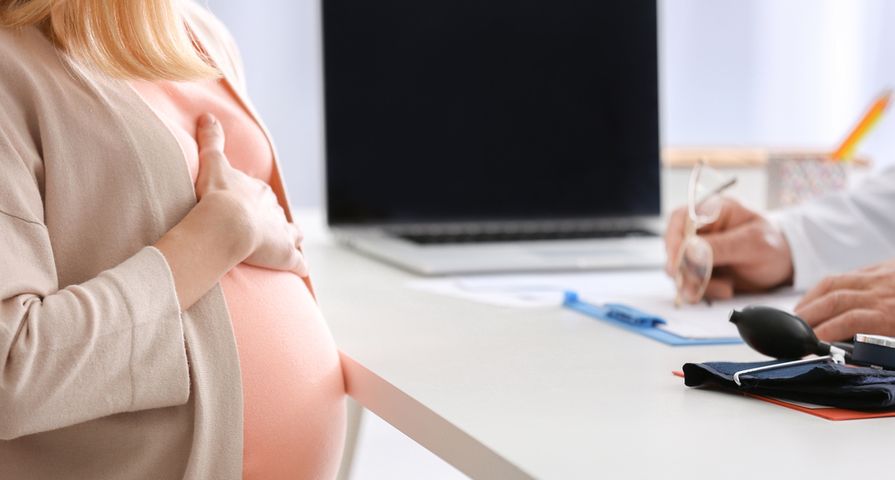 Infographic: 7 Superfoods to Eat During Pregnancy

Nuchal translucency is a screening ultrasound examination obtained between weeks 11 and 14 of pregnancy. Because it is a screening test, nuchal translucency can’t determine for sure if a baby has a birth defect. A positive screening test requires follow-up with a diagnostic test to definitively diagnose a birth defect. It measures the amount of fluid at the base, or nuchal fold, of a fetus’ neck.

Pregnancy-associated plasma protein A (PAPP-A), also known as Pappalysin-1, is a protein produced by the placenta during pregnancy. Levels of PAPP-A can be determined using a blood test and can be used to screen for aneuploidy, which is an abnormal number of chromosomes in a cell. Aneuploidy can be seen with Down syndrome or other chromosomal abnormalities.  Pappalysin-1 is also associated with complications of pregnancy such as small size for gestational age (SGA), preterm labor, preeclampsia, spontaneous abortion, and stillbirth.

The screening blood test for pregnancy-associated plasma protein A (PAPP-A) is typically obtained between weeks 11 and 14 of pregnancy. Abnormally low levels of PAPP-A are associated with aneuploidy and certain complications of pregnancy. A positive screening test requires follow-up with a diagnostic test to definitively diagnose the kind of aneuploidy or specific pregnancy complication.  Down syndrome, or trisomy 21, is the most common cause of aneuploidy.

Human chorionic gonadotropin (hCG) is a hormone produced by the placenta during pregnancy.  The presence of hCG in both the urine and blood is detected in pregnancy tests.  Some cancerous tumors also produce hCG. Levels of hCG can be determined using a blood test and can be used along with other blood markers to screen for certain birth defects such as Down syndrome, spina bifida, or anencephaly.  Anencephaly is a condition in which the fetus is born with a partially formed brain and spinal cord.

Alpha-fetoprotein (AFP) is a blood protein manufactured by the fetal liver and can be found in amniotic fluid surrounding the fetus.  It is the most abundant blood protein found in the fetus.  AFP also crosses the placenta and can be measured in maternal blood.  As a result, maternal serum AFP can be used as a screening tool to assess the probability of potential genetic disorders or birth defects.

A blood test to measure AFP is generally done between 15 and 20 weeks of pregnancy, with the most accurate results obtained between weeks 16 and 18.  It is typically drawn as part of the maternal triple (hCG, AFP, and E3) or quadruple (hCG, AFP, E3, and inhibin A) screening test.  High levels of AFP may be associated with the presence of a neural tube defect (such as spina bifida or anencephaly), an omphalocele (failure of closure of the abdomen), or a multiple pregnancy.  The most common cause of an elevated AFP level is a miscalculated due date.  Low levels of AFP may suggest chromosomal abnormalities such as Down (trisomy 21) or Edward (trisomy 18) syndromes.

Estriol (E3) is one of the three forms of the hormone estrogen and is produced by the placenta.  As a result, it is only produced in significant amounts during pregnancy and becomes the dominant estrogen during pregnancy.  The other two forms of estrogen include estrone (E1) and estradiol (E2).

A blood test to measure estriol is usually performed between weeks 15 and 20 of pregnancy.  It is usually drawn as part of the maternal triple (hCG, AFP, and E3) or quadruple (hCG, AFP, E3, and inhibin A) screening test.  Low levels of E3 may be associated with a neural tube defect such as spina bifida or anencephaly.  Low levels of E3 may also be associated with pregnancy loss (fetal demise).

Factors That Can Affect Fertility in Men and Women

A blood test to measure inhibin A is usually performed between weeks 15 and 20 of pregnancy. It is part of the maternal quadruple screening test, which measures hCG, AFP, and E3. High levels of the hormone inhibin A may be associated with chromosomal abnormalities such as Down syndrome. The quadruple screening test along with other factors such as maternal age, race/ethnicity, and weight are used to calculate the chances of a neural tube defect or chromosomal abnormality affecting a pregnancy.

Chorionic villus sampling (CVS) is performed as a prenatal diagnostic test. It involves removing a small sample of chorionic villi from the placenta.  The sample can be obtained through the cervix (transcervical) or the abdominal wall (transabdominal). The chorionic villi share the same genetic makeup as the fetus.  Reasons for CVS include increased nuchal translucency, abnormal first trimester screening results, previous pregnancy or family history of chromosomal or genetic disorder, advanced maternal age (age > 35-years), and parents being known carriers of a genetic disorder.

Chorionic villus sampling is typically carried out between weeks 10 and 12 of pregnancy.  It can be used to diagnose chromosomal abnormalities (such as Down syndrome) or other genetic disorders (such as cystic fibrosis).  CVS cannot diagnose neural tube defects.  Complications of CVS may include miscarriage (0.7-percent) or uterine infection (rarely).

Things You Did NOT Expect While Expecting

Amniocentesis refers to surgical puncture to remove fluid from the amnion, or sac surrounding the fetus. It is a prenatal diagnostic test. Practitioners use ultrasound guidance to safely remove amniotic fluid from the amnion. The amniotic fluid furnishes cells shed by the fetus for analysis. The most common reason for amniocentesis is an abnormal maternal triple or quadruple screening test in the second trimester of pregnancy.

Amniocentesis is typically performed between weeks 15 and 20 of pregnancy. The procedure can diagnose chromosomal abnormalities, neural tube defects, and genetic disorders in upwards of 99-percent of cases. Down syndrome is the most common chromosomal abnormality. The most common neural tube defect is spina bifida. Amniocentesis has a small risk for miscarriage, which occurs with a frequency ranging from 1 in 400 to 1 in 200 procedures.  Other side effects may include abdominal or pelvic cramping and leakage of amniotic fluid.

The OGTT is performed between weeks 24 and 28 of pregnancy.  It consists of drawing a fasting blood glucose followed by ingestion of a 75-gram load of glucose.  Blood samples for glucose levels are taken and recorded every hour for two consecutive hours.  Normal results for OGTT are fasting levels less than 92 mg/dL, one-hour levels less than 180 mg/dL, and two-hour levels less than 153 mg/dL.  Pregnancy-related complications of gestational diabetes may include excessive birth weight (macrosomia), preeclampsia, and increased risk of developing type 2 diabetes.

The Importance of Fitness for Moms-to-Be

Group B streptococcus (GBS) is a bacterium that can colonize the lower genital tract of women.  The event causes no problem in non-pregnant women, but has the potential to cause serious illness in a mother and her newborn.  The presence of GBS can lead to a severe infection of the placenta (chorioamnionitis), urinary tract infections (UTIs), preterm labor/birth, kidney infection (pyelonephritis), or sepsis (a severe bacterial blood infection).

Pregnant women should be screened for the presence of GBS via vaginal and rectal swabs sent for culture between weeks 35 and 37 of pregnancy.  The GBS infection may be spread to newborns as they pass through the birth canal.  It is one of the most common causes of life-threatening infections in newborns, including meningitis and pneumonia.  Mothers should be treated with antibiotics to reduce the transmission of GBS to their newborns.