Symptoms and Signs of Ankylosing Spondylitis 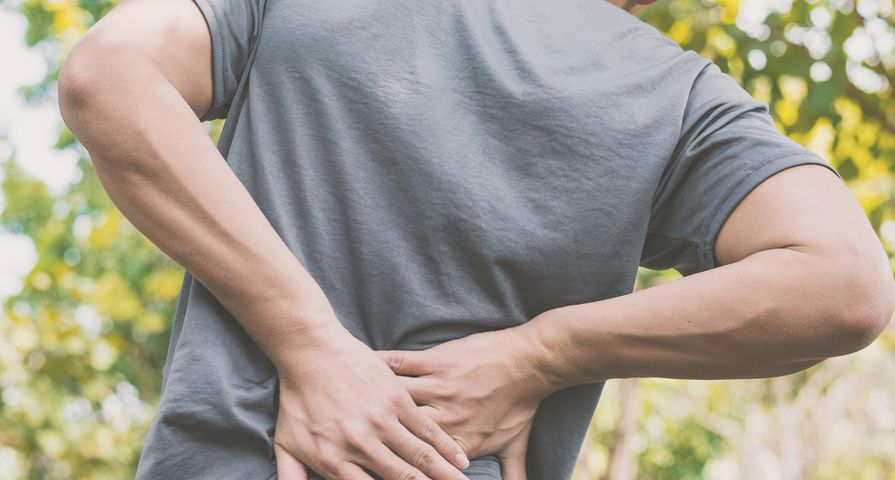 Ankylosing spondylitis (AS) is a mouthful. Most people probably aren’t familiar with this condition, but in plain words it’s essentially a form of arthritis that affects the spine. Not surprisingly, there are a slew of uncomfortable symptoms that come along with this condition. The most common are back pain, stiffness, and inflammation. These symptoms can be felt anywhere from the neck to the lower back and, in serious cases, can cause a hunched-over posture or breathing problems, says WebMD.

The key to dealing with this condition is early diagnosis and receiving treatment to help control the symptoms and prevent any further problems. As part of this, we should all be aware of the signs and symptoms to look for and what ankylosing spondylitis might feel like…

As we already briefly mentioned, AS typically causes a great deal of pain and stiffness in the back, which can also travel into the buttocks and hips. The condition tends to start in the sacroiliac joints, “where the sacrum (the lowest major part of the spine) joins the ilium bone of the pelvis in the lower back region,” writes WebMD. In the beginning, the patient will likely feel pain mostly at night and find that it gets better in the morning, or even as the condition progresses, there might be periods of little pain until a flare-up occurs. However, this joint pain can also be felt in the knees, shoulders, and jaw.

People who suffer from this condition might feel a little bit like the tin man from the Wizard of Oz, who needs to oil his joints in order to move! Reader’s Digest talked to Suleman Bhana, MD, a rheumatologist in Middletown, New York, who points out that the stiffness starts in the lower back and buttocks, but can spread up the spine and into the neck. “Stiffness is usually worse during the morning,” he says.

Bony fusion just sounds painful and it is. According to WebMD, AS can lead to an overgrowth of bones, which creates a slew of other problems such as the abnormal joining (or fusing) of bones. This is exactly what bony fusion is. “Fusion affecting bones of the neck, back, or hips may affect your ability to perform everyday things,” writes WebMD. “Fusion of the ribs to the spine or breastbone may limit your ability to expand your chest when taking a deep breath,” adds the source.

3. Pain in Ligaments and Tendons, or Enthesitis

In addition to affecting the bones, AS can also affect the ligaments and tendons that are attached to the bones. WebMD points out that patients might experience tendinitis, which is inflammation of a tendon. This can cause pain and stiffness in the affected area. For example, the Achilles tendon may become painful and stiff.

VeryWell Health also points out that ligaments and tendons can be affected by AS. Not only in the form of pain but also with inflammation, which is a condition called enthesitis. This is inflammation of the entheses, “which are the areas of the body where a tendon or ligament connects to a bone. The heel is the most common site of enthesitis,” writes the source. This of course leads to pain in the affected area. Depending on what part of the body is affected, it can cause pain in other areas as well.

A bent posture is one of the complications of AS. If the condition goes undiagnosed and untreated, WebMD warns that it can lead to a bent or stooped posture. This is the result of constant inflammation and changes to the vertebrae (backbones). VeryWell Health also explains that new bone formation can lead to spinal fusion, which might cause a person’s back to curve forward. This condition is called hyperkyphosis. In extreme cases, it leads to a hunchback, but other changes can occur as well.

VeryWell Health adds that it’s important to note this type of bent posture only occurs in some people. “This process may limit spinal mobility, making it more difficult to pick something up from the floor,” writes the source.

The fatigue that AS patients experience is likely due to a lack of sleep. This results from the amount on pain they are experiencing. It’s so bad that it interrupts their sleep. WebMD also notes that it could just be part of the disease process itself. Dr. Bhana told Reader’s Digest that it’s not uncommon for chronic pain disorders, such as AS, to cause fatigue in patients. “The inflammation can also cause fatigue, as your body must use energy to try and fight the inflammation,” says Dr. Bhana.

As with many other things that have to do with our bodies, age plays a huge role AS. According to the Spondylitis Association of America, AS typically affects men and women between the ages of 17 and 45. “Things that raise concerns about AS include back pain and stiffness in the morning with no injury history, especially when stiffness lasts for 45 to 60 minutes or more in a person younger than 40,” says Eric Matteson, MD, MPH, Emeritus Chair of the Division of Rheumatology at Mayo Clinic in Rochester, MN to Reader’s Digest.

7. Back Pain Doesn’t Go Away

Part of what makes the back pain of AS stand out from any other normal aches and pains is that this pain won’t go away on its own. It’s more than just a pulled or overworked muscle. AS is a chronic progressive disease that gradually worsens over time. The symptoms will come and go, but never stop completely. The pain begins in the lower spine and gradually creeps up the back, says Healthline.

The Spondylitis Association of America notes that the pain usually lasts more than 3-months, but there can be quiet periods where it seems to almost get better. “There may be quiet periods with little to no pain that are followed by flares when AS symptoms get more intense and new problems appear,” explains Reader’s Digest.

AS not only affects the back but also other joints! This arthritis is like a virus in the body, as it spreads to other joints. According to Reader’s Digest, AS can affect the hips, ankles, elbows, knees, shoulders, fingers, and even the jaw. Pretty much any and all major joints in the body can be affected by AS. “With AS, the joint involvement is not symmetrical like it is with rheumatoid arthritis and lupus,” says Dr. Bhana to the source. “It may be one ankle and not the other, or two fingers on one hand and none on your other hand,” adds Dr. Bhana.

You might be wondering what our eyes have to do with the spine! But according to the Spondylitis Association of America, 40-percent of patients with AS will experience some kind of inflammation in their eye. Other eye-related symptoms patients with AS could experience are painful watery eyes, blurred vision, and sensitivity to bright lights, says Reader’s Digest. The source talked to Dr. Bhana about this symptom, and he said it’s often the one symptom that leads to an AS diagnosis.

VeryWell Health notes that anterior uveitis is more likely to occur in patients who’ve had AS for a longer period of time and those who have tested positive for the genetic variation human leukocyte antigen (HLA)-B27.

According to Reader’s Digest who talked to David Stephen Pisetsky, MD, PhD, a professor of Medicine, Rheumatology, and Immunology at Duke University Medical Center in Durham, NC, there are other disease that could serve as a warning sign of AS. Patients with AS will sometimes also develop the symptoms of inflammatory bowel diseases (IBD), such as Crohn’s disease or ulcerative colitis. “The connection could be due to the underlying inflammation or the IBD could be a side effect of the nonsteroidal anti-inflammatory drugs (NSAIDS) that many people take to treat pain and inflammation,” writes the source after talking with Dr. Pisetsky.

In addition to IBD, patients who have a history of psoriasis, another common skin disease, as well as back pain, should raise suspicion that their pain is possibly related to AS.

Family history is obviously not a symptoms of AS, but it can be a warning sign. “People with certain genetic markers are susceptible to AS. But not all people who have the genes develop the disease,” explains Healthline. Don’t immediately freak out if someone in your family has AS. It’s not a definite thing, but it can happen. Researchers are still unclear why it happens to some and not others. “If you have a relative with either AS, psoriatic arthritis, or arthritis related to [IBD], you may have inherited the genes that put you at greater risk for AS,” writes the source.

12. Pain Gets Better with Movement

It might seem like a strange concept, but for many patients with AS, their back pain actually gets better with movement. This would be different than traditional back pain from a bulging disc or pulled muscle, says Reader’s Digest. With those two conditions, the pain would generally get worse with movement. “It’s called the gelling phenomenon,” says Dr. Bhana to the source. “Activity gets your joints loosened up, kind of like antifreeze does for your car’s radiator,” adds Dr. Bhana.

As we’ve already mentioned, AS not only affects the spine and back area, but also can spread to other areas of the body, be associated with other diseases such as psoriasis and IBD, and even affect our eyesight! While these symptoms we’re about to mention are rare, they can happen. VeryWell Health points out that some patients experience complications surrounding their heart, lungs, or kidneys. “Both inflammation of the aorta and aortic valve regurgitation can cause heart failure, which can be fatal. Heart conduction defects are also possible,” writes the source.

AS can lead to lung problems due to limited movement in the chest wall or spine or from lung fibrosis. “Kidney problems such as IgA nephropathy can also occur,” explains the source. “Though some of these problems may be life-threatening, they are much less common than the spinal symptoms of AS,” adds the source.