Suck it Up: 6 Facts on Cupping Therapy 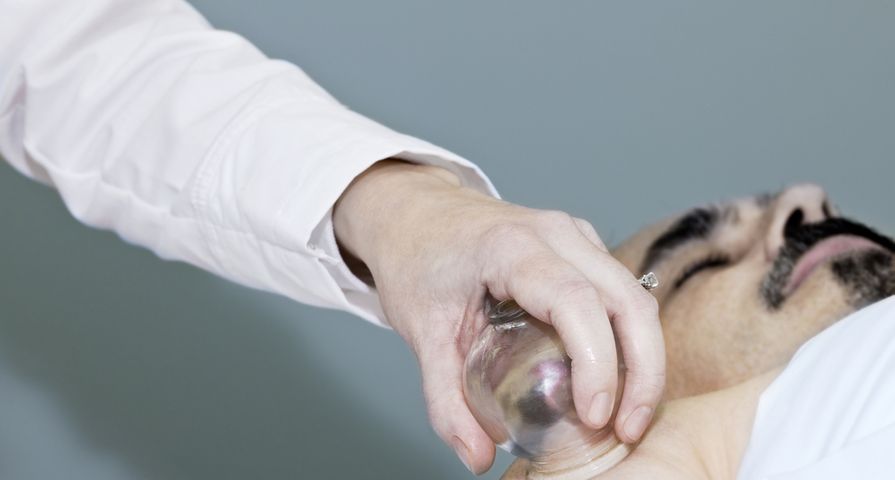 It is making a big comeback thanks to top-notch Olympians, like Michael Phelps, practicing it, but the art of cupping has been around for centuries. The therapy involves placing cups on an affected area (often the back) using heat and suction—as in a heated cup is placed on the skin, a vacuum is created from the cooling, becoming a kind of massage (only pulling instead of pushing on tissue).

While cupping is a trending subject right now, according to WebMD it was used in Ancient Egypt, China, and the Middle East long before we saw the recent images of athletes with circular cupping marks on their skin. Instead of heating the cups, some modern practitioners (and patients) prefer to use a pump to create the vacuum effect. Here are six facts about this ancient therapy that’s enjoying the spotlight of late…

1. It’s a Cut and Dried Practice

Well, not really, but this was a clever attempt to explain there are 2-types of cupping—dry and wet. The dry version involves leaving the cups in place for a few minutes to suck the skin into it and expand the blood vessels, whereas wet cupping takes it a step further.

While still not proven, many believe that “wet” cupping can help rid the body of toxins. It involves the therapist making small cuts where the cup was providing suction, and then replacing the cups to draw out a small amount of blood. Proper precautions should be taken beyond this point to ensure no infection results.

Gout: Navigating Alcohol During The Holidays

2. It’s Not as Painful as it Looks

While cupping draws up areas of skin and leaves it looking red and enflamed, there’s not necessarily much pain associated with the treatment, according to CuppingResource.com. That’s also dependent on the experience and skill of the practitioner, adds the source.

It says that most patients will only experience “a slight pinching sensation” during treatments. The resulting “bruising” from the skin being sucked up for a few minutes is also not usually painful, and massage therapy (with proper hydration) can help speed up the healing process. Wet cupping can be more uncomfortable, but a local anesthesia can be used to dull pain during cutting, adds the site.

WebMD says while there haven’t been a great deal of medical studies conducted on the positive effects of cupping, it points to one report in particular that appeared in Journal of Traditional and Complementary Medicine in 2015. This particular write-up apparently shows cupping can be used for more than relaxation and pain relief.

That report followed 2012 findings that reviewed 135 reports on cupping, adds the source. The conclusion of the 2012 review was that combined with other natural or drug remedies, cupping can be useful to combat acne, anxiety, facial paralysis, herpes zoster (also known as shingles), and cervical osteoarthritis (a neck joint disorder). CuppingResource.com offers a much longer list of cupping therapy benefits.

This is a fancy way of saying fat under the skin, which appears in bumpy textures and can cause a person to become self-conscious about it. The Pacific College of Oriental Medicine in California suggests instead of using expensive spa treatments or other forms of cellulite reduction, try cupping as an effective way to fight fat.

The college explains that for this treatment purpose, oil is applied to the skin first to create some “glide”. Once the cups are put in place, they are dragged around the affected area. One source, called CelluliteInvestigation.com, notes that some women who tried weight loss cupping didn’t see any results for a few weeks, but the firming effects were noticeable after a month or so (results may vary).

Well, that’s maybe a bit dramatic. What we mean is that during the height of suction from the cups, when blood is brought to the surface (which is great for improved circulation and natural healing, by the way), it can also cause small blood vessels to burst. This is what causes the telltale red marks on the treated area, notes LiveScience.com.

That being said, the source supports the idea that the therapy is safe and relatively painless. The worst side effects it reports are tingling in extremities, and in some other cases, fatigue or headaches (none any longer than 4-hours). There have been some reports of the bruises becoming infected, but those are rare—so keep an eye on the red marks to ensure they’re fading and not getting worse.

6. Some Celebrities Swear By It

While the 2016 Rio Olympics has helped bring cupping to the surface again (see what we did there?) thanks to incredible athletes like swimmer Michael Phelps sporting red circles on his skin during competition, other big names have been advocates for the therapy as well in recent years.

Some other people you might recognize that have proclaimed their love of cupping include movie/TV stars Jennifer Aniston, David Arquette, Lena Dunham, singer Lady Gaga and several other celebs. If it’s good enough for top athletes and A-list screen stars, then maybe there’s something to the whole craze? There’s only one way to find out if it works for you…