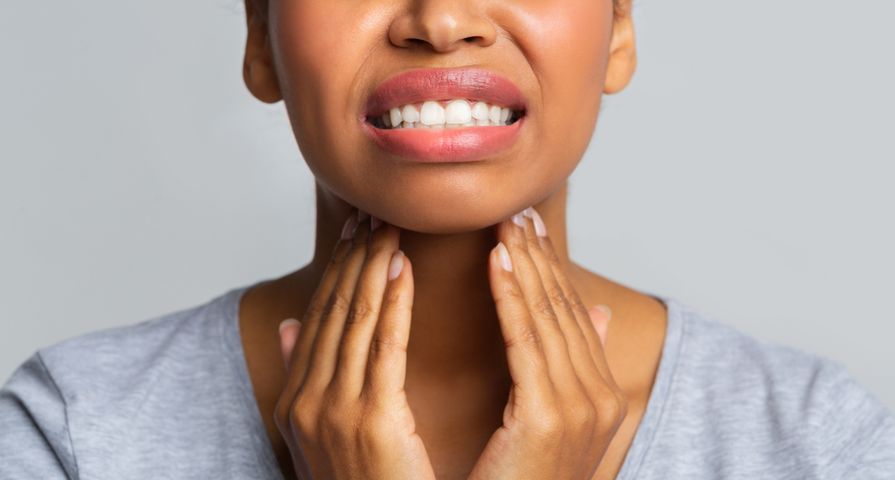 Potential Causes For Your Sore Throat (Plus Symptoms For Each)

It seems to come out of nowhere. You can feel soreness in your throat when you swallow, and it even sometimes hurts when you talk. But what is the source of this scratchy throat? It is simply an irritation of some kind that will quickly go away on its own, or is it caused by an infection? There can be some anxiety and confusion about just how serious of a problem your sore throat is and whether it could be something more severe.

Identifying and knowing the symptoms of a sore throat will help you decide whether you need medical treatment, or if you can simply try some home remedies to soothe it and wait it out. Here are 12 things to know if you’re trying to decide whether your throat is simply sore, or if it’s the dreaded strep…

1. What Is Strep Throat?

Before we get into all of the comparisons and symptoms of a “regular” sore throat versus strep, we should first explain what strep actually is. Medically known as group A streptococcus, this is a bacterial infection that leads to inflammation of the throat. It’s a common condition that can affect people of all ages (but is more common among kids aged causing 15- to 30-percent of their sore throats, notes Healthline).

This bacterial infection is highly contagious and can easily be spread through coughing and sneezing, as well as sharing a drink, adds the source. If you have a strep infection, you will likely have more symptoms beyond just unpleasantness while eating a meal – which we’ll dive more into.

2. Fever is Common With Strep

Sometimes when you have a scratchy throat, whether it’s caused by a strep infection or something else, you can feel a little bit of “heat” coming from the area when you breathe out. You might also experience a slight tingling or burning sensation in the throat, which can be worse when swallowing.

However, if strep is the culprit, then you’ll most likely also have an elevated temperature. Cedars Sinai notes that strep is often accompanied by a fever of 101-Fahrenheit or higher that lasts for more than two days. The source says if your child has a fever that exceeds 101-Fahrenheit and doesn’t come with any other symptoms of a common cold, then you should make a call to your doctor.

3. Strep Could Lead To Tonsillitis

Another possible cause of a sore throat could be an infection of the tonsils (those oval-shaped pads at the back of the throat) that are red and swollen or have white and yellow patches, notes the Mayo Clinic. This infection, called tonsillitis is caused by a bacteria and is more common in ages 5 to 15. When tonsillitis is caused by a virus it is more often seen in younger children reports MedlinePlus.

Swollen tonsils can be accompanied by trouble breathing, and if it’s streptococcus at work and it isn’t properly treated, it can lead to other conditions such as rheumatic fever, warns the clinic. Surgery to remove the tonsils may be needed if other treatments aren’t effective, it adds.

Early Signs of the Flu

4. Sore Throats Are Common With Colds and Flu

If your only symptoms are sore throat and fever (without a cough), then you might be dealing with strep. However, a sore throat can simply be a symptom of a cold or flu virus – in fact, viruses are the most common cause of a raw-feeling throat, according to WebMD.

If your sore throat is the result of cold or flu, then you’ll also have the other symptoms that go along with it – such as runny nose, sneezing, coughing, and watery eyes, adds the source. A sore throat can actually sometimes be the first warning sign that a cold is coming on, but it will often clear up in a couple of days, it explains.

Feel around the front of your neck if you’re suffering from a sore throat (including the base under the chin). Does it feel like anything is lumpy where it normally isn’t? If so, it could be a sign of swollen lymph nodes, which are more likely to occur with strep then it is with a cold or another cause.

Lymph nodes typically enlarge when they’re fighting off an infection, due to an increase in red blood cells – and strep throat is one of the triggers, notes Cleveland Clinic. However, it’s still very possible your swollen neck glands are from a cold, flu, sinus infection, or even mononucleosis, according to the source.

6. Strep May Be Mimicked By a Virus

While some causes of a sore throat don’t cause a fever, there is a particular viral strain known to doctors called coxsackie that can cause a moderate fever and even difficulty swallowing, notes HealthyChildren.org. This virus is most active during the summer and fall months, adds the source, noting it’s also associated with hand, foot, and mouth disease that’s characterized by blisters on the hands and feet (and even in the throat sometimes).

While someone can have strep at any time of year, some sources note that it’s most common during the winter and early spring. Check for the telltale signs of blistering and see a doctor to help sort it out if you’re not sure.

7. A Doctor Can Determine The Difference

If you’re not 100-percent sure what you’re dealing with – whether it’s just a sore throat as a symptom of a cold or another cause or a strep infection – then your doctor can sort it out fairly quickly for you. A physician can’t distinguish the source of the sore throat just by looking.

However, doctors use something called a rapid strep test, which basically means they take a swab sample from your throat and run test results, notes the Centers for Disease Control and Prevention (CDC). If that doesn’t turn up anything, another test called a throat culture (also from a swab) can detect the growth of strep bacterium that the rapid test might’ve missed, adds the source.

What to Know About an Adenovirus

If your doctor determines that strep is indeed the cause of your sore throat, then they will usually prescribe antibiotics (commonly amoxicillin, notes the CDC.) As long as you’re not allergic to common antibiotics used to treat strep (make sure you let your physician know if you have any of these allergies), then this could be a relatively quick fix.

However, antibiotics will do little to nothing if bacteria are not the root cause. The CDC notes that in some cases, the rapid test for strep from the doctor can come up positive even if it’s another reason. In this case, it’s possible you’re only a carrier of strep (without the related symptoms) and actually be suffering from a virus that doesn’t respond to antibiotics, it adds.

There are a variety of natural remedies you can try to soothe a sore throat, including honey, tea (chamomile is a good choice), gargling with salt water, and even adding a tablespoon of apple cider vinegar to warm water and drinking the solution. However, if strep is causing your scratchy throat, then you might want to reconsider.

This isn’t to say that you can’t ease your strep throat with certain home remedies (although antibiotics will achieve the quickest results). The Mayo Clinic says that in the case of sore throat due to strep, you can try getting more rest, drinking lots of water, and even eating easy-to-swallow foods like soups. Over-the-counter painkillers can also provide temporary relief, it adds. However, it might be wise to see a doctor if the symptoms (including fever) persist more than a couple of days.

While a sore throat from a cold or flu will often clear up on its own in a week or so, untreated strep can turn into something nastier, according to MedicineNet.com. Aside from rheumatic fever, these complications include a middle ear infection, meningitis, pneumonia, or toxic shock syndrome – which is rare but serious and can lead to organ failure, warns the source.

There’s also something called post-streptococcal glomerulonephritis (or PSGN for short) that can impact the kidneys following a bout of strep throat, with the highest risk age group under seven, notes the source. Strep throat treatment won’t prevent this complication, but it often clears up after a few weeks without lasting damage, it adds.

11. Other Possible Causes Of a Sore Throat

While you may very well have a bad case of the strep or a viral infection like a cold or flu, there are a variety of other reasons you might be experiencing discomfort in your throat, according to Healthline.

For example, you may be suffering from allergies to pollen or pet danger that can irritate the eyes and throat, notes the source. A sore throat can also be a sign that the air is too dry (try a humidifier), or it could be from irritants such as cigarette smoke, cleaning products, or pollution. Your doctor may also check for gastroesophageal reflux disease (GERD) or in some more rare cases, a throat tumor.

The Most Common Symptoms of GERD

You can protect others from getting a sore throat whether it’s from strep or flu by following roughly the same hygiene routines. That means covering your mouth when you cough or sneeze, washing your hands often, and avoiding sharing cups and utensils.

If you have a respiratory infection (such as a cold), the CDC recommends staying home if you’re coughing or sneezing often or are vomiting or have diarrhea. For strep, you should stay home until your fever subsides and you’ve been taking antibiotics for at least 24-hours, it adds. While there’s a seasonal vaccine for flu, there isn’t one (yet) for strep.