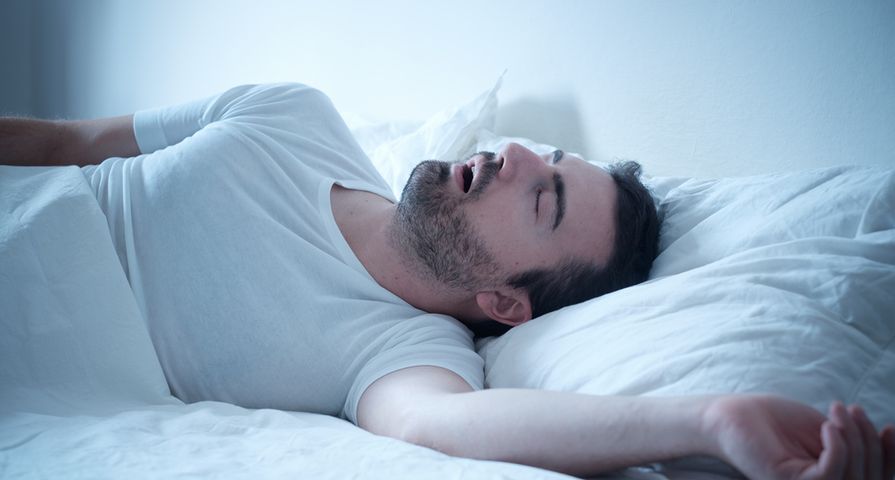 Tired of waking up sleepy even after a full night’s sleep? You may be suffering from sleep apnea, which is a common problem in the U.S. In fact, the Alaska Sleep Education Center says that sleep apnea affects roughly 20-million Americans.

The Alaska Sleep Education Center notes this type of sleep apnea is defined by “partial or complete blockage of the airways during sleep,” caused by throat muscles that relax and block airflow (for 10-seconds or more). This means less oxygen is getting to the brain, and “in turn signals the brain to partially awaken from sleep to signal the body that it needs to breathe,” it adds.

The patient will then gasp loudly or make snorting noises to move past the obstruction, it explains (which can obviously be disruptive to anyone sharing the bed). Once the brain gets the hit of oxygen it needs, sleep returns and the cycle repeats, says the source.

This is another form of sleep apnea, which WebMD says differs from OSA in that the airway is not obstructed. Instead, it’s actually the brain that is failing to send the signals for your muscles to breathe while you’re unconscious, it adds.

The reason for this is “instability in the respiratory control center,” it notes. There are a number of different types of central sleep apnea depending on their root cause, such as drug-induced apnea and certain medical conditions, which we’ll look more at next.

The Alaska Sleep Center says no matter what type of sleep apnea you have, it’s likely you’ll experience similar symptoms. For example, snoring can be an obvious sign of OSA, but so can feeling sleepy during the day and experiencing morning headaches, it adds.

Meanwhile, CSA can also cause excessive daytime drowsiness, morning headaches, and mood changes, which can also show up in OSA patients, it adds. The snoring associated with CSA isn’t usually as powerful as with OSA patients, it notes.

The Mayo Clinic says you may be experiencing central sleep apnea for a number of reasons. It could be from Cheyne-Stokes breathing, which is a rise then a gradual decrease in airflow associated with congestive heart failure or stroke, says the clinic. The drug-induced version we mentioned is usually linked to the use of opioids that can cause breathing to become irregular, it adds.

Meanwhile, other types that fall into this category include high-altitude periodic breathing, which can mimic Cheyne-Stokes breathing patterns, it explains. Complex sleep apnea can arise in patients using CPAP machines to treat obstructive sleep apnea, it says – it’s essentially a combination of the 2-problems.

6 Common Sleep Disorders that are Keeping You Up at Night

WebMD says that the most common culprit behind obstructive sleep apnea is excess weight and obesity, “which is associated with soft tissue of the mouth and throat.” The throat and tongue muscles relax during sleep, but can end up being a blockage for some people at risk, it adds.

However, the causes of OSA in children may differ, adds the source. It explains the main causes in kids are enlarged tonsils or adenoids, or dental conditions such as severe overbite. In some cases, it can also point to a tumor or another growth in the airway, or birth defects such as Down Syndrome that causes enlargement of the tongue, it adds.

6. Other Risk Factors for OSA

Aside from excess weight, WebMD says that obstructive sleep apnea might be the result of hereditary features including a “narrow throat, thick neck, and round head.” It might also be a sign of hypothyroidism (low thyroid production) or an excess production of growth hormones (a condition called acromegaly). Allergies and a deviated septum in the nose might also be to blame, it adds.

Other reasons that adults in particular might be suffering from OSA are smoking and excessive alcohol use, as well as the use sedatives, says WebMD.

Strange Things The Body Does While You Sleep

The Mayo Clinic says many of the risk factors for this type of sleep apnea are out of your control – for example, being male or being older than 65-years can increase your chances of developing this problem. It’s also a possible complication of congestive heart failure or brain tumor.

However, there are other risk factors that you have some control over, such as avoiding being at high altitudes (or at least avoiding sleep while you’re in an airplane if possible), reviewing your opioid prescription with your doctor, or switching to another airway pressure therapy other than CPAP, it adds.

Meanwhile, OSA has also been linked to certain eye conditions such as glaucoma, which is elevated eye pressure that can damage the essential optic nerve. Luckily, eye-related complications can usually be treated, it assures.

Your sleep partner may be the one that urges you to see a doctor due to your excessive snoring, not suspecting there’s a real medical problem involved. If you’re snoring loudly enough to wake you or others out of their slumber, then you should consider consulting a medical professional, notes the Mayo Clinic.

Waking up gasping or choking, or experiencing daytime drowsiness that may cause you to fall asleep during work hours (or worse, when driving) are also reasons to call your doctor for an appointment, it adds.

Once you’ve made the first step in consulting a doctor, they will have to use tests to determine if sleep apnea is the cause of your problems. One of the ways a doctor can do this is by ordering a sleep test, also known as a polysomnogram, which records your physical activities while you sleep, explains WebMD.

Other tests that are sometimes used to diagnose sleep apnea include an electroencephalogram (EEG) to record brainwave activity, an electromyogram (EMG) to determine REM stage sleep, a nasal airflow sensor, and a snoring microphone, it adds.

Your doctor can turn to a number of methods to help target your sleep apnea and help you (and others) sleep at night. The National Sleep Foundation says a continuous positive airway pressure device (CPAP) is usually the first-line defense, and it gently maintains airflow using a mask while you sleep.

There’s another similar method called nasal expiratory positive airway pressure, using a disposable valve to cover the nostrils (to allow breathing in but prevent exhaling), it adds. Another medical treatment is hypoglossal nerve stimulation to measure airflow and control tongue movement to maintain breathing, it adds.

Reasons You’re Waking Up In The Night

The Sleep Foundation says there are things you can do on your own to help lessen the impacts of sleep apnea. These include losing weight if you’ve been medically deemed to be overweight or obese (this can actually cure apnea says the source), while avoiding alcohol, which actually relaxes the upper airway muscles.

Smoking can cause excessive swelling in the upper airways, making the problem worse, it adds. If you’re a back sleeper, try adjusting to being a side sleeper instead – this has provided relief in some cases of mild sleep apnea or heavy snoring, it suggests.