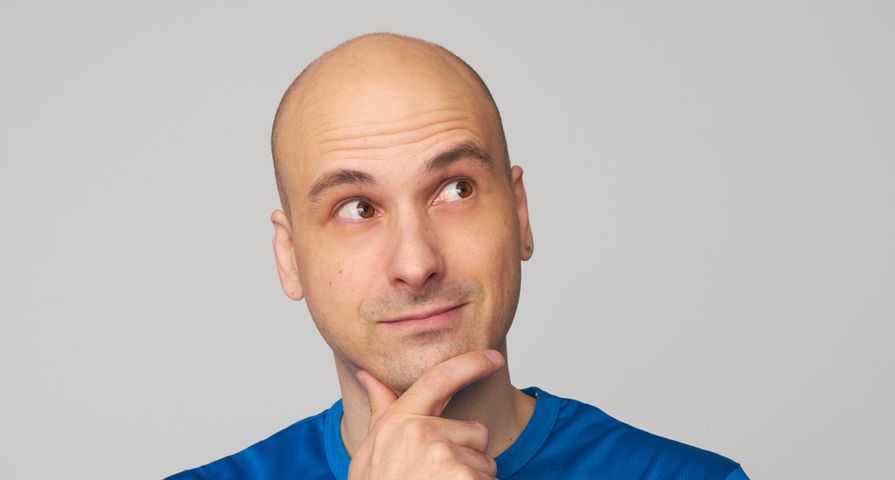 It happens to about 50-percent of men, according to Men’s Journal. And no, it’s not erectile dysfunction (although that’s up there too). It’s hair loss, which is especially noticeable among men that are 50-years of age or older.

There are 2-camps when it comes to male baldness: the “do-everything-you-can to save your hair”, and the “embrace your newfound shininess”. Either way, it can be somewhat traumatic at first for any man to watch his hairline recede. Here are six facts about male baldness to comb through…

Like most cosmetic issues, someone has found a way to profit from it. In this case, the hair loss industry is worth a whopping $3.5-billion, according to Men’s Journal. But unfortunately, “many hair loss solutions are worthless,” adds the source.

It can be tough to separate the miracle cures and gimmicky products from real solutions because “many people advocating for or against different products tend to have stakes in the industry too,” notes the source. Men tend to grab at anything they can in hopes it will work, without looking at root causes of hair loss, it adds.

You may have heard relatives and friends telling you that your mother’s side of the family is to blame for your thinning hair. Well, that’s only partially true, according to US News.

Genetic factors that affect hair loss is complex. The primary “baldness gene” is the X chromosome, which is passed to men from their mothers, can skip generations. However, “research suggests that men who have a bald father are more likely to develop male pattern baldness than those who don’t,” adds the source. So if your mom’s family all has luscious locks and your father’s hair looks like the remains of a forest fire, you’re not out of the woods yet.

This information circulated earlier in 2016, and for those of you men who are follically challenged, it’s good news. IHeartIntelligence.com cites a 2016 study that claims, “hairless men are perceived to be more masculine, powerful, and dominant than their furry-headed counterparts.”

Think Bruce Willis and Patrick Stewart, for starters. The article notes that instead of fighting against hair loss, you might be wise to embrace it and shave what you have left. It may feel counterintuitive, but you might also catch some unexpected winks when you remove your hat.

Grooming Can Cause Hair Loss

You want the hair you have to look its best, so you spend time in front of the mirror running a comb or brush through it, and maybe adding some styling product. It turns out that excessive grooming may leave you with a lot less to groom in the future, according to Medical Daily.

The source notes, “Running a brush or comb too hard through your hair puts a lot of physical stress on the hair fiber, and it can cause the cuticle to flake and strip away.” This is especially true if your hair is wet when combing, as it leads to “excessive pulling,” adds the source.

HisHairClinic.com has some news for you guys that are overly smug about your (perceived) full head of hair: “50-percent of a man’s hair is gone before it becomes noticeable.” That means if you’re thinking of preventative measures, it may be too late to save it all by the time you notice a loss of locks.

The good news is that hair loss is gradual, so you won’t go from slightly bald to completely shiny overnight, adds the source. “The fact that most guys aren’t noticing their hair loss until it’s half gone should motivate guys out there to get ahead of the game,” it adds.

There’s a school of thought out there that suggests if you regularly shave your head, if you let it all grow back, it will come in thicker and stronger. Not the case, according to a website called Go Ask Alice (from Columbia University in New York).

Thicker hair from shaving may be a bit of an optical illusion, the site suggests. “With new hair growth, the short hair shaft will be more noticeable, since it now has a blunt tip due to shaving, as opposed to the normal tapered tip,” it explains. This is also true for facial hair.