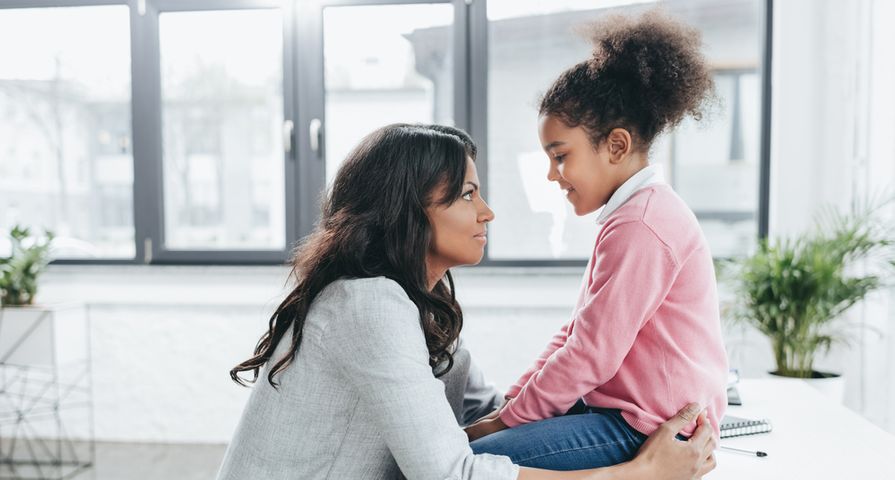 According to the National Association of Anorexia Nervosa and Associated Disorders, anorexia has the highest mortality rate among mental illnesses and is the third most common mental health issue among teens.

With the fear of obesity and becoming overweight coupled with the desire to achieve the North American ideal of beauty, over one-half of teenage girls and up to one-third of boys are using unhealthy methods to control or lose weight.

From smoking and skipping meals to vomiting and abusing exercise or laxatives, the number of eating disorders and body image issues are increasing. So what can a parent do to help prevent their child from not only developing a disordered relationship with food, but also help to promote a positive body image?

Take an Inventory on Parental Beliefs About Fat

To say we aren’t influenced by our culture’s beliefs about fat and body is to suggest we live under a rock. The fact is we are all influenced by what we read, see, and hear in the media and even from our health professionals. The beliefs that fat is evil and to be fat is to be unhealthy continue to poison our minds and influence our behaviors. We join weight loss programs and take steps to ensure we have eliminated fat, sugar, or carbs from our diet. We talk about weight gain like it is worse than losing an arm.

As adults, we have a responsibility to role model healthy behaviors and to do what we can to ensure we are not passing our own fear of fat onto our kids. To create positive change, it is important to examine our own feelings about food, weight, and the body because whatever those attitudes are, they are being passed down to our children. If a parent is chronically diet and/or exercise or celebrating the last 10-pound loss, the child may be soon to follow.

There are times when we fear talking about a sensitive subject may entice the behavior we are trying to avoid. In fact, by opening up the channels of communication and talking honestly about feelings and experiences, children feel more at ease, understood, and accepted for their feelings. By validating a child’s feeling or belief about their body, we are listening and demonstrating our understanding of their fears, attitudes, and actions.

When we react by saying things like “you’re not fat” or other minimizing remarks, we are not truly listening, which, in turn, breaks down the communication. When a child discloses he feels ugly or fat and wants to go on a diet or gym to lose weight, a parent may inquire more about his feelings rather than shut him down by focusing on the positive (although we want to make them feel better instantly, it isn’t helpful). By listening more than we talk, we will be surprised at the results.

We have all been guilty of finding fault with our bodies. We may talk openly about how we can’t stand our muffin top or saggy arms and thinking nothing of it. Additionally, we may place that focus onto our children while verbalizing our concerns about their growing waistline or chubby arms. Make no mistake, negative body talk directed to anyone is hurtful and will, overtime, influence the attitudes and beliefs of children.

It’s bad enough that we can’t turn on the TV without hearing about the latest food, diet, or exercise regime to rid us of our fat. Children don’t need it in their homes. A safe and accepting home may be what a kid needs to drown out the noise of self-hate, and learn to love themselves the way they are.

Place Value on the Inside Not the Outside

Children who grow up with constant attention and value placed on their attractiveness or other physical traits may carry the belief that to be loved one must be beautiful. Not surprisingly, this belief relates, not only to eating disorders and exercise abuse, but to depression, anxiety, and feelings of suicide. What’s more, when a person’s identity is wrapped up in their physical appearance, their self-worth suffers.

This faulty belief drives people to plastic surgery, unhealthy diets and exercise, and spending too much money on creams, serums, and other snake oils that promise youth and beauty. Parental attention to a child’s kindness, honesty, respect for others, intelligence, generosity, and humour (just to name a few) will teach the child that they are loved for who they are and not what they look like.

Talk About Health Not Weight

Health practitioners, politicians, and educators alike are sounding the alarm about the rising obesity rates in children. Although negative health outcomes do rise with extreme weight gains, being fat does not make one unhealthy if physical activity and health nutrition are attended to.

Therefore, it makes sense to focus less on the fat and more on the healthy behaviors. Having discussions on why we need to eat from a wide variety of vegetables would be more impactful to weight loss then talking about why we need to lose fat. Additionally, planning a fun physical activity in the child’s day (preferably with the parent) and ensuring participation will make a positive impact on the physical and mental health of the child.

All health promotion campaigns are not created equal. Although some have had a positive influence on decreasing smoking rates and increasing the use of seat belts, the war on fat has been less successful. Leorna Pinhas, a psychiatrist at the Hospital for Sick Children, in Toronto suggests that health promotion programs in schools that examine food labels and strengthen the belief that junk food is the enemy, may influence eating disorders in kids.

Health promotion campaigns and some nutritional experts have been guilty of creating two groups of food—the good and the bad. In fact, there is no such thing as a bad food when enjoyed in moderation. As a parent, it is important to acknowledge this in the home and enjoy the odd treat while keeping a focus on healthy food choices. We may not have control over how our schools promote health, but in our homes we can make a considerable difference in the mental health of our children.

Be Aware of What They Watch

Research from the Geena Davis Institute on Gender in the Media examined the roles of men and women on TV and in the movies and found that, when studying children shows, male characters appear at twice the rate as female characters. In addition, children’s animation depicts the female characters in high sexualized clothing and over-exaggerated body shapes while the males are portrayed with defined musculature and large chests. From video games, magazines, musical lyrics, and music videos, girls and boys are looking to the media for lessons in how to talk, dress, and behave.

By being aware of what kids are being exposed to, a parent may have a better chance at cultivating a healthier body image for their child. After saying that, we can’t be on watch 24/7, but if we can even make a small, positive difference in how our children feel about their bodies, their food, and their overall health, it will be well worth it.

Common Signs of an Eating Disorder

From Thinspiration to Fitspiration—It’s All Bad!

Trends in social media are now offering the dieter and exerciser photo streams of motivation. These pictures show women touting their six-packs and slender bodies as an offering for those in need of a little push. Mantra’s such as “Suck it up now so you don’t have to suck it in later” are offered as a way to coach girls and boys to stick it out to reap the benefits of achieving that beautiful body.

Unfortunately, the research suggests this form of motivation will backfire and can lead to disordered eating and exercise, depression, and decreased motivation to continue the diet or exercise regime. Tanya Berry, an exercise psychologist at the University of Alberta, when examining participant motivation after viewing clips of The Biggest Loser, found exercise participation dropped. As expected, the key to good mental and physical health is a combination of healthy behaviors and the acceptance of body diversity.

Be Mindful of Exercise

While exercise in moderation is a healthy part of any lifestyle at any age, when overdone, it can not only lead to incredible injury and illness, but can turn into an addiction like any other drug. Although most schools limit the participation children have in physical education, many kids make the decision to work out on their own. From specializing in sport to performing sit-ups after dinner, it is important for the parent to talk about this exercise behavior and to be vigilant for slips into disordered exercise.

If the child must perform 100 sit-ups after dinner and becomes anxious when they are unable to do so, a problem may be developing. Additionally, if a child insists on playing sport while suffering from an overuse injury, it is important to address this and introduce the concept of healthy exercise early (even if the coach may not be so inclined). Remember, exercise can serve as a “gateway drug” into a world of unhealthy behaviors leading to a never-ending pursuit of the “ideal body”.

Kathi has worked in the health and fitness profession for over 25 years and holds a degree in Kinesiology with master’s degrees in exercise and sport psychology and clinical counselling. She is currently a corporate facilitator in health promotion on topics relating to exercise, mental health, and addiction awareness. She is a firm believer in the prescription of exercise for positive mental health and that good health can be enjoyed at every size.