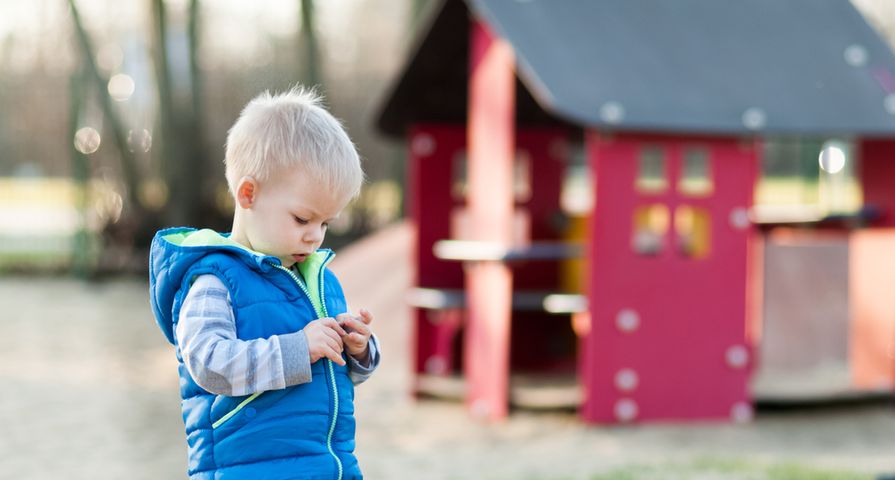 Autism spectrum disorder (or ASD) is distinguished by a wide variation of social, communication, and cyclical behaviors that are considered somewhat out of character for children.

Every autistic individual will experience these symptoms differently and on a mild to severe spectrum. However, the following 14 behaviors are considered common early warning symptoms of autism in children…

It’s important to keep in mind that autistic children are not disconnected emotionally themselves; they simply don’t understand or pick up on social cues as efficiently or quickly as other children. In addition to not reacting normally to the facial expressions and social cues of others, babies with autism also tend not to smile or react joyfully themselves. They also have a diminished or non-existent capacity for the normal back-and-forth sharing of sounds or facial expressions. Typically, these symptoms will manifest by the time the baby is about 9 months old.

Another characteristic common to children with autism is that they have difficultly empathizing with others. While empathy is a fairly advanced emotion and it can be difficult to effectively detect and evaluate in babies and young children, there are specific cues you can look for. Generally speaking, autistic children seem to have difficulty understanding or appreciating situations from other people’s perspectives. This is because they think that everyone understands the world as they do, which can cause confusion or the inability to foresee or understand the actions of others.

As with emotional disconnection, this does not happen because the child lacks the capacity for empathy. It is simply a sign of a developmental delay or disability that indicates the possibility of an autism spectrum condition. Autistic children tend to have a relatively narrow and limited range of emotions as well, and empathy may not yet be part of the child’s emotional vocabulary.

Most children are very social by nature. However, infants with autism don’t engage by staring at the faces of others, responding when hearing their name, mimicking facial expressions, or grasping at the fingers or hands of others during play. Instead, children with autism often just don’t seem very interested in engaging in normal developmental games and activities, including socializing and imitating other people.

These symptoms typically begin to show when the child is one year to 18-months of age. As socialization with other children continues, the symptoms may become more pronounced and noticeable. For example, by the age of three, children normally want to play with toys and other kids; autistic children tend to have less interest in toys and seem perfectly happy to play alone. By the age of four, an autistic child may be completely ignoring other children when they’re in preschool or group play situations.

In more rare cases, children with autism can display unbalanced emotional reactions to normal situations. For instance, they throw a temper tantrum inappropriately or show physically aggressive behavior to themselves, their parents, siblings, or other children (i.e., biting or head banging). They may seem to be unable to control their emotions and physical responses, especially when they find themselves in new, strange, or stressful situations.

Parents should carefully monitor their children’s social responses throughout their development and familiarize themselves with the important milestones and behavioral expectancies a child should display when he or she reaches certain ages. Though relatively rare, these types of emotional outbursts should be noted and documented. That way, if the symptoms develop to a point where you report them to the child’s doctor, you’ll be able to provide specifics. This will aid the doctor in making a diagnosis, if an ASD is indeed the root cause

By 3 years of age, the majority of infants start to babble or mimic the language of those they interact with, actually pronouncing a single word when they point to an object or try to get the attention of their parents. However, infants with autism may not start to babble or speak until much later. Some won’t start to display any significant language skills until they start to work with a speech therapist.

Look for these symptoms not only when you interact with your child, but also when your child interacts with other boys and girls. You may notice that while other children verbalize communication even though their skills are limited, autistic children tend not to. Autistic children who communicate in gestures may also display an inhibited ability to draw meaning from back-and-forth gestural engagement with parents and adult caregivers.

Often, children with autism also have trouble understanding that people sometimes express themselves figuratively. As mentioned, they may not derive any secondary meaning from demeanor or facial expressions. They may not also detect communication cues delivered through tone of voice; for example, they can’t distinguish a happy tone of voice from a sad or angry one, and unlike children following standard paths of development, they don’t develop the ability to identify sarcasm or understand body language.

Individuals with autism are somewhat prone to repetitive behaviors. For instance, they may arrange and rearrange the same group of objects, rock back and forth for extended periods of time, flutter their hands, or repeat the same word or phrase in what appears an obsessive manner. This is one of the most easily identifiable symptoms of autism, and it’s one most parents will be on the lookout for early on in the child’s development.

Autistic children also tend to have impaired motor skills as compared with children who are on standard developmental curves. They often have trouble learning to hold or use crayons and pencils, and they may only be capable of creating unintelligible shapes when other children their age can draw recognizable pictures. Even if the child is introduced to other activities and may show interest in them for a while, regression to abstractly repetitive behavior is a sign that the child may have an autism spectrum condition.

Children and even adults with autism are prone to pica, which describes a behavioral tendency to eat objects that are not food. For instance, a child may need monitoring outdoors or at school so they don’t consume dirt, clay, or paste. Autistic individuals may also frequently put fingers and other unsafe objects inside their mouths. They may also attempt to chew and/or swallow these objects. Interestingly, pica is something that can also develop in pregnant women, although researchers have yet to uncover a definitive link between pregnancy pica and autism rates in children born to those mothers.

Obviously, pica poses some significant risks to the child’s health. He or she may be more prone to bacterial infections and internal injuries. While many children try to eat inedible objects, the key difference is that autistic children will continue to do so at a relatively advanced age, and may engage in this behavior despite understanding that the things they’re trying to eat aren’t food and don’t belong in their mouths.

Sensitivity to external stimuli is another early warning sign of autism. For example, autistic individuals may become stressed or agitated when exposed to specific noises, bright lights, or particular smells, tastes, or textures. They may also become hypersensitive to certain stimuli; in other words, they will insist on wearing certain items of clothing or colors, prefer rooms with bright lights or loud sounds, and enjoy touching or playing with specific body parts. Many autistic children also display emotional stress when they are deprived of their preferred stimuli.

Alternately, the opposite can happen; an autistic child may avoid certain colors, clothes, sounds, lights, or areas of the home for no apparent reason. If they are exposed to these stimuli, they may respond by lashing out or having unusually severe temper tantrums. Researchers theorize that children with autism have highly sensitive ways of mentally processing these stimuli, which leads to the unusual behavior and reactions.

This warning sign doesn’t typically present itself until the child is a little bit older and can begin engaging in activities or routines. Children with autism will often show signs of inflexibility. This includes obsessive and repetitive behaviors. They will find one or few activities that they enjoy, sometimes these activities are very unusual, and they will want to do them repeatedly throughout the day.

Helpguide.org provides some detailed examples of what these obsessive behaviors might include, especially as they get older. For example, their need for a rigid routine might include taking the same route to school every day, an inability to adapt to changes in schedule or environment, an unusual attachment to toys or strange objects, or becoming obsessed with a narrow topic of interest, usually something that involves numbers or symbols. They will enjoy repeating the same actions over and over again, spending long periods of time staring at moving objects like a ceiling fan, or instead of playing with a toy, they’ll only focus on one aspect of it, like spinning the wheels on a toy car.

Branching off slide 5, which lists delayed language development as an early symptom, Healthychildren.org says that children with autism will also struggle with communication in a much more general sense. Not only will they be unable to speak or extremely delayed in their language development, they might seem completely uninterested in communicating at all.

As a result, they will not show any interest in sparking conversation or be able to participate in even a simple conversation. They will not respond to facial expressions, use facial expressions, notice when their name is being called or even point at things when they need something. When they do start speaking, their language is often underdeveloped. For example, they might confuse their pronouns and use “you” when they should be saying “I” and vice versa, or repeat sentences they hear without understanding the meaning behind them. Healthychildren.org says this is called “parroting” or “echoing.”

According to Autism Canada, signs of autism can begin as early as 12 to 24 months. While it is often hard to get a diagnosis before the age of 24 months, one of the best indicators of autism is the absence of normal behaviors. There are many other signs on this list that can’t truly be recognized until the child is older, and a child’s responsiveness can be tested while they are still quite little.

Children with autism “may appear deaf, respond unevenly or not at all to sounds.” HelpGuide.org lists several signs of unresponsiveness in babies and toddlers, such as if they won’t make eye contact, respond to familiar voices, follow objects visually, or even a pointed gesture. They will not imitate facial expressions, movements, make noises to get attention, or use any gestures to communicate, such as waving or smiling.

It can be devastating for a parent to learn something is wrong with their child, but luckily with autism, an early diagnosis (ideally by 18-months) can make a huge difference. Once a baby is past its infancy stage, parents might begin to notice their child does not like to be touched or cuddled like a typically developing child would.

Autism Canada also notes that children with autism also do not like to be touched, which makes it hard to console them during emotional outbursts or tantrums, especially when they are young. It can affect their ability to bond with parents, siblings, or even make friends in the future.