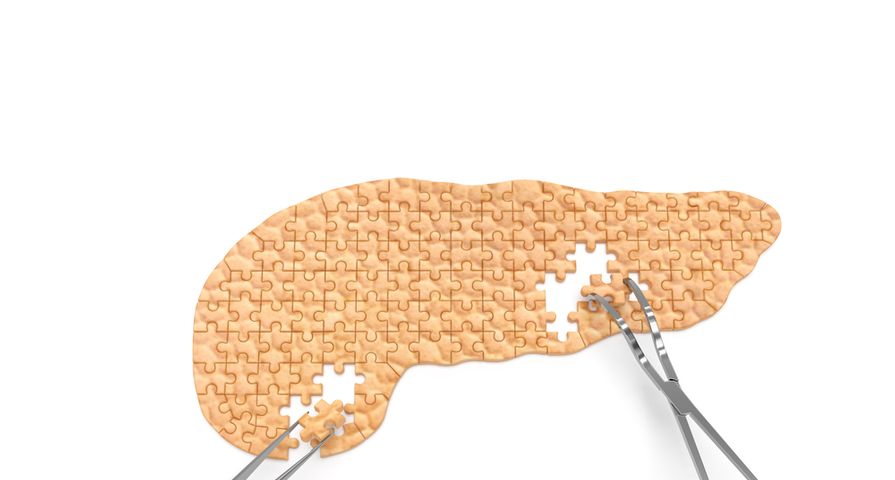 We’ve all heard about our pancreas before, but do you actually know what it does? Our pancreas is actually a large gland that sits behind the stomach. It plays an important role in our digestive process. Its two main jobs are releasing digestive enzymes into the intestine that help our body digest food and releasing hormones that regulate glucose in the blood and how our body uses food for energy. No big deal or anything!

Unfortunately, it’s not immune to illness, and while it’s an incredible organ, it’s also very delicate. One of the biggest threats against the pancreas (in addition to pancreatic cancer) is pancreatitis. This condition causes the pancreas to become inflamed. “Pancreatic damage happens when the digestive enzymes are activated before they are released into the small intestine and begin attacking the pancreas,” writes WebMD.

There are two types of pancreatitis: acute and chronic. To learn more about this condition, let’s take a look at the differences and similarities between these two conditions…

Acute pancreatitis is a condition that causes the pancreas to become inflamed. This inflammation often lasts a short period of time. It causes pain that can range from either mild to severe discomfort or even lead to a life-threatening illness, says WebMD.

While most people with acute pancreatitis recover shortly after receiving treatment, there are severe cases that “can result in bleeding into the gland, serious tissue damage, infection, and cyst formation,” adds the source. If the condition is not treated, it could due to serious harm to other vital organs, such as the heart, lungs, and kidneys.

Chronic pancreatitis is similar to acute, but in this case, the inflammation is long-term and won’t get any better. In fact, over time, it tends to get worse and lead to permanent damage.

Chronic pancreatitis will often develop after an episode of acute pancreatitis has already occurred, and is likely due to heavy drinking, says WebMD. “Damage to the pancreas from heavy alcohol use may not cause symptoms for many years, but then the person may suddenly develop severe pancreatitis symptoms,” writes the source.

The symptoms of acute pancreatitis typically begin in the upper abdomen with either gradual or sudden pain. This pain can sometimes extend into the back and could start off as mild but get worse after eating. The National Pancreas Foundation also points out that the pain is often “severe, constant, and commonly lasts for several days in the absence of treatment.” This condition can be quite serious and requires immediate medical attention that often results in about 3 to 5 days of hospitalization. Anyone suffering from acute pancreatitis will look and feel extremely ill and will need to be monitored for pain control and hydration.

A patient could also experience a swollen and tender abdomen, some nausea and vomiting, as well as a fever and rapid pulse, says the source.

Similar to acute pancreatitis, patients with chronic pancreatitis will experience upper abdominal pain, but chronic pancreatitis patients can also have no pain at all. If they do have pain, it can spread to the back, get worse with eating and drinking, and according to The National Pancreas Foundation, become “constant and disabling.” The source also notes that, in some cases, the pain gets really bad and then disappears, but this isn’t the norm.

A patient can also experience nausea, vomiting, weight loss, diarrhea, oily or fatty stool and clay-colored stools. “Individuals with chronic pancreatitis frequently lose weight, even when their appetite and eating habits are normal,” writes the source. “The weight loss occurs because the body does not secrete enough pancreatic enzymes to digest food, so nutrients are not absorbed normally, leading to malnutrition.” WebMD notes that patients with chronic pancreatitis are at risk for developing diabetes because the specific hormone in the pancreas that regulates glucose in the blood could become damaged.

The most common cause of acute pancreatitis is gallstones. “Gallstones pass through the common bile duct to enter the small intestine. At the entry of the small intestine, the main pancreatic duct joins or lies immediately next to the common bile duct,” explains The National Pancreas Foundation. Gallstones become a problem when they get stuck in the bile duct and obstruct the normal flow of pancreatic fluid. This leads to pancreatic injury. It can also cause a backflow of bile into the pancreatic duct. The source notes that how gallstones exactly cause pancreatitis is still unclear, but what is known is that there is definitely an association between the two.

According to WebMD, 70-percent of chronic pancreatitis cases are caused by long-term alcohol abuse, and about 20 to 30-percent of cases are unknown. Any of the other cases in between are typically caused by “gallstones, hereditary disorder of the pancreas, cystic fibrosis, high triglycerides, and certain medicines.”

The National Pancreas Foundation also includes autoimmune conditions (when the body’s own immune system attacks itself), a blocked pancreatic duct or common bile duct, and a family history of pancreatitis as other potential causes.

For the most part, pancreatitis can happen to anyone, says WebMD, but it’s more likely to occur in people who suffer from gallstones or those who have been long-term abusers of alcohol. The source points out that gallstones can be one of the first signs of this condition as they block the pancreatic duct, eventually causing acute pancreatitis.

Unlike acute pancreatitis, there are not many, but a few more risk factors for chronic pancreatitis. These risk factors include “heavy alcohol drinking for a long time, certain hereditary conditions, such as cystic fibrosis [and] gallstones,” and “conditions such as high triglycerides and lupus,” writes WebMD.

The National Pancreas Foundation also points out that chronic pancreatitis is more common in people between the ages of 30 and 40 and occurs more often in men compared to women.

Acute pancreatitis is often diagnosed with a blood test that measures the digestive enzymes amylase, and lipase, explains WebMD. If any of these levels are high, it’s likely due to acute pancreatitis. If this is the case, the source goes on to explain that the doctor might order additional tests, such as a pancreatic function test, glucose tolerance test, ultrasound, CT scan, and MRI. They might use an endoscopic retrograde cholangiopancreatography (ERCP) to look at the pancreas and its bile ducts, an X-ray, or do a biopsy to remove a small tissue sample from the pancreas. If the condition is advanced they will order blood, urine, and stool tests to confirm the diagnosis.

Patients with chronic pancreatitis have a greater risk of developing pancreatic cancer, says Medical News Today, so the condition needs to be monitored closely.

Patients with acute pancreatitis are often hospitalized and given intravenous (IV) fluids and pain medications. In some cases, the symptoms are so severe that patients are admitted to the intensive care unit (ICU). Here, they will be closely monitored because pancreatitis can damage the heart, lungs, and kidneys, according to WebMD.

“Some cases of severe pancreatitis can result in death of pancreatic tissue. In these cases, surgery may be necessary to remove the dead or damaged tissue if an infection develops,” writes the source.

An attack brought on by acute pancreatitis never lasts more than a few days, if it’s treated. As we previously mentioned, it’s often caused by gallstones. In some cases, the gallbladder might have to be removed or surgery will need to be performed on the bile duct. “After the gallstones are removed and the inflammation goes away, the pancreas usually returns to normal,” says WebMD.

Chronic pancreatitis is more difficult to treat than acute pancreatitis. Really, the best and only thing to do for these patients is to help manage their pain and educate them on any diet changes that could help improve their condition, such as switching to a low-fat diet. They are also given pancreatic enzymes and the hormone that regulates glucose in the blood, says WebMD.

In severe cases a patient might have surgery done to help relieve their abdominal pain, “restore drainage of pancreatic enzymes or hormones, treat chronic pancreatitis caused by blockage of the pancreatic duct, or reduce the frequency of attacks,” writes WebMD.

They will be directed to make certain lifestyle changes around their diet and to stop drinking and smoking.

Can it be Prevented?

Due to the fact that pancreatitis is primarily caused by alcoholism, most of the time it can be prevented by limiting drinking or not drinking at all. It’s also commonly caused by gallstones, so taking steps to prevent these would also be beneficial. As for the other risk factors and common causes, the prevention for those is a little more difficult.