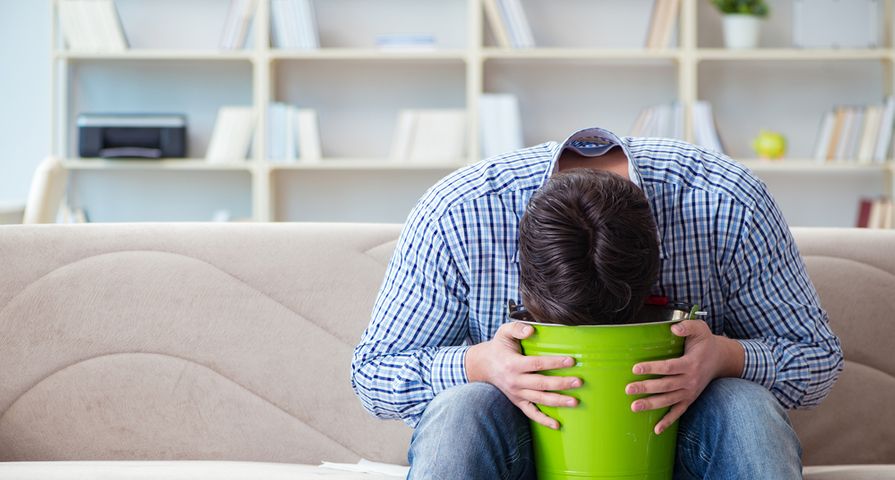 However, severe abdominal pain is another story, and in most cases, it’s not indicative of a serious health issue, but in some cases, it can signal a serious illness. That’s why it’s important to be able to differentiate the symptoms of stomach pain…

Food poisoning can cause serious stomach discomfort due to a bacterial or parasitic infection. Food poisoning can be caused by over 250 different food and waterborne illnesses, ranging from Salmonella to E. coli and from botulism to cholera, resulting in painful abdominal cramping, nausea, vomiting, fever, gas, diarrhea, fatigue, and dehydration.

The U.S. Centers for Disease and Control (CDC) estimates that 48-million Americans suffer with food poisoning annually. Another CDC statistic reveals that 128,000 U.S. citizens are hospitalized yearly with food poisoning, and 3,000 suffer death due to a foodborne illness yearly.

Lactose intolerance is caused by a lack of the enzyme lactase, which makes it impossible to digest lactose (the sugars in dairy products). Typically symptoms such as gas, abdominal pain, cramps, nausea, bloating, diarrhea, and even vomiting will occur within 30-minutes of consuming dairy products. Because those with lactose intolerance cannot comfortably eat foods and beverages with lactose, one can still take lactase digestive enzymes to help aid the digestion of lactose in the intestines.

Gastroesophageal reflux disease (GERD), also known as acid reflux, typically results after eating a rich, fatty, or particularly filling meal. The end result is painful indigestion that manifests itself in gas, bloating, abdominal pain, belching, nausea, vomiting, an acidic taste in the mouth, and a burning in the stomach or the upper part of the abdomen. A balanced diet low in fats and physical activity will typically help alleviate GERD.

A study conducted by the Norwegian University of Science and Technology indicates a link between obesity and GERD, and because obesity is on the rise, researchers say so is GERD. After monitoring over 30,000 people in Norway for 11-years, the overall data showed a 50-percent increase in the symptoms of acid reflux over the past decade, roughly a 47-percent increase.

It happens to us all, even though it’s mortifying to talk about (even to a doctor), but constipation results in strained or lack of normal bowel movements and is often spurred by stress, diet, or an underlying health problem. The outcome is obviously quite uncomfortable and can last days, causing stomach pressure and pain, a distended abdomen, rectal tearing, and even nausea and vomiting.

According to statistics from WebMD, constipation strikes approximately 2-percent of the population in the U.S., with women and the elderly as the most commonly affected. Although not all cases of constipation are serious (constipation can be caused by dehydration, lack of exercise, or inadequate fiber intake), serious causes of constipation include stress, hemorrhoids, laxative abuse, eating disorders, irritable bowel syndrome, Parkinson’s disease, hypothyroidism, depression, and colon cancer.

Gastroenteritis, known more commonly as the stomach flu, causes the lining of the stomach and intestines to become irritated and inflamed due to a nasty virus or bacterial infection. We’re more than familiar with these symptoms, which consist of nausea and vomiting, abdominal cramps, explosive diarrhea, fever, inability to keep food or fluids down, dehydration, and fatigue.

According to research from the CDC, roughly 80-percent of stomach flu outbreaks occur from November to April and are caused by the norovirus. This extremely contagious virus is transmitted from person-to-person via contaminated food or water or via contact with contaminated surfaces. The virus results in the inflammation of the stomach and/or intestines and is most dangerous for older adults, young children, and those with compromised immunity.

How Do I Know If I'm Lactose Intolerant?

Abdominal pain from menstrual cramps can occur in women who are menstruating, due to hormonal shifts that cause muscle contractions in the uterus. For some unfortunate females, the cramps can be so severe that they are unable to get out of bed for days. Typically severe menstrual cramps indicate an underlying health issue (e.g., pelvic inflammatory disease or endometriosis).

Doctors refer to the pain and cramps that result prior to and during menstruation as dysmenorrhea. Between 40-percent and 70-percent of women of reproductive age suffer from dysmenorrhea. However, there are two different kinds of dysmenorrhea: primary dysmenorrhea refers to pain in those with normal pelvic anatomy and ovarian function, while secondary dysmenorrhea describes pain due to pelvic dysfunction and typically strikes in the early 20s to mid-40s.

A food allergy, most commonly to gluten, dairy, nuts, or eggs, results when the digestive system negatively responds to a certain food because of the lack of a digestive enzyme or sensitivity. Typically, a period of elimination is required to pinpoint the troublesome food. The individual may suffer from a combination of stomach pain, nausea and vomiting, hives or another type of skin rash, diarrhea, chest pain, gas, bloating, abdominal distention, shortness of breath, and anaphylaxis (an uncontrolled allergic reaction that can be life-threatening) whenever the food is consumed.

It’s normal and healthy for us to produce and pass gas as our digestive systems break down the meals we consume.  However, difficult to digest foods (e.g., beans, dairy, raw vegetables, fruits, and whole grains) can cause excess gas, resulting in painful bloating, chest or esophageal pain, belching, cramps, and flatulence (excessive gas).

Acid indigestion occurs in individuals of all ages and both sexes. Normally, indigestion is due to a large or rich meal; however, you can also experience indigestion due to excess alcohol consumption, medications (e.g., aspirin), or stress. More serious, chronic cases are caused by irritable bowel syndrome, thyroid issues, GERD, ulcers, stomach infections, pancreatitis, gastroparesis (in diabetics), and stomach cancer.

Peptic ulcers are painful sores that form in the lining of the stomach or duodenum (the first portion of the small intestine) when the digestive fluids in the stomach become too acidic and a bacterial infection (Helicobacter pylori) causes damage to the tissues. Oftentimes, ulcers result from long-term stress, but they can also develop with long-term use of nonsteroidal anti-inflammatory drugs (NSAIDs), such as aspirin or ibuprofen (Motrin, Advil).

According to the CDC, roughly 6-million Americans develop a peptic ulcer each year, or roughly 15-percent of the U.S. population at any one time. Peptic ulcers are thought to be four times more common in males and in the elderly as compared with the general population.