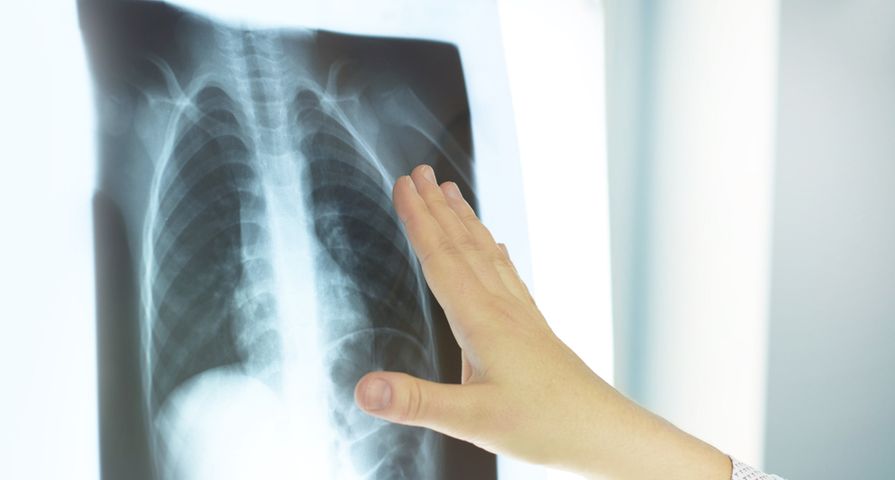 Cystic fibrosis is a serious genetic condition that affects the lungs and digestive system. According to the Cystic Fibrosis Foundation, the defective gene responsible for the disease “causes a thick, sticky buildup of mucus in the lungs, pancreas, and other organs.” Over time, as cystic fibrosis progresses, it will limit a person’s ability to breathe.

The disease is most commonly diagnosed in infants and young children, but in some cases, symptoms do not appear until adulthood. While all newborns in the United States and Canada are now screened for cystic fibrosis at birth—making diagnosis possible within the first few weeks of life—for those who were born before such testing was implemented it’s important to be aware of the common signs and symptoms, including these 18.

Cystic fibrosis is caused by a single defective gene—the cystic fibrosis transmembrane conductance regulator (CFTR). According to WebMD, this gene “controls the flow of salt and fluids in and out of your cells.”

As a result, people with cystic fibrosis will have increased salt in their sweat, causing very salty-tasting skin. Parents of children with the disease will often taste the salt when kissing them.

Along with an increased level of salt in the sweat, the defective gene also causes people with cystic fibrosis to develop thick, sticky mucus. This mucus will build up in various parts of the body, including the lungs.

As it collects in the airways, it can make breathing more challenging. This can cause a person to cough persistently, often expelling some of the phlegm that’s responsible for the irritation.

AboutKidsHealth.ca says that normal mucus, which is thin and slippery, “keeps the lungs clean by removing dirt and germs from the lungs’ airway tubes.” But, as mentioned earlier, the sticky mucus caused by cystic fibrosis builds up in the airways, allowing bacteria to collect.

These trapped bacteria can cause cycles of inflammation and infections in the lungs, such as bronchitis or pneumonia. Over time, such infections can cause damage to the lung tissues due to how frequently they occur.

Wheezing or Shortness of Breath

As with coughing, symptoms of wheezing and shortness of breath are common among those with cystic fibrosis due to the build-up of sticky mucus in the airways. The affected individual may find these symptoms are especially pronounced while engaging in physical activities.

In some cases, these respiratory issues may persist for an extended period of time, from several days to weeks. The Mayo Clinic says this is known as an acute exacerbation and “requires treatment in the hospital.”

Despite having a good appetite, children with cystic fibrosis may struggle to gain weight, and in some cases, weight loss may also occur. As a result, they may not grow and develop at the rate they should.

AboutKidsHealth.ca says this is due to mucus blocking the ducts of the pancreas, which prevents its enzymes from reaching the small intestine. As these enzymes aid in digestion, a lack of them means food cannot be properly broken down and therefore, the child will not get enough nutrition from what they eat.

As mentioned earlier, the mucus caused by cystic fibrosis blocks the ducts of the pancreas. Not only does this impair a person’s ability to absorb necessary nutrients, but it also prevents the intestines from fully absorbing fats and proteins.

The National Heart, Lung, and Blood Institute indicates this can cause “ongoing diarrhea or bulky, foul-smelling, greasy stools.” The source adds that intestinal blockages can also occur, particularly in newborns. These blockages may lead to gas or severe constipation, which can result in a swollen abdomen or stomach pain.

Duct blockages within the pancreas can also lead to acute or chronic pancreatitis, which the Johns Hopkins Cystic Fibrosis Center defines as “an inflammatory process that can cause severe abdominal pain, vomiting, and diarrhea.”

Cystic fibrosis also impacts the reproductive systems of both men and women with the disease. According to the National Heart, Lung, and Blood Institute, men with cystic fibrosis are born without a vas deferens, “a tube that delivers sperm from the testes to the penis,” making them infertile.

Women with cystic fibrosis are capable of having children; however, they may struggle to get pregnant due to mucus blocking the cervix or other complications associated with the condition.

Mucus lodged within the body’s airways may also cause patients with cystic fibrosis to feel like they constantly have a stuffy nose and congested sinuses. This build-up can lead to frequent infections within the sinuses, which is known as sinusitis.

The Mayo Clinic adds that soft, fleshy growths inside the nose, called nasal polyps, may also occur due to its lining being inflamed and swollen on a persistent basis.

This could be one of the first warning signs of cystic fibrosis in newborn babies. Meconium ileus is the first stool (bowel movement) that a newborn has, explains the Children’s Hospital of Philadelphia. So what does that have to do with cystic fibrosis? As we already mentioned earlier on in the article, cystic fibrosis can cause intestinal blockages or bowel obstructions because their intestine is thicker and stickier than normal. This creates a blockage in part of the small intestine, which is known as the ileum. Any infant that experiences meconium ileus most likely suffers from cystic fibrosis.

When looking for meconium ileus, check for a swollen belly, green vomit, and take note of whether or not they have been able to pass any bowel movements, says the source.

Urinary incontinence is uncomfortable and sometimes embarrassing as it causes the leakage of urine when you don’t want it to. Losing control of your bladder isn’t a nice feeling, but unfortunately, it affects many people.

Very Well Health points out that women with cystic fibrosis over the age of 20 are likely to experience urinary incontinence, whereas men are less likely to ever experience this symptom. The reason why this symptom exists and why men don’t experience it and women do is still unclear, but “it’s believed that prolonged, frequent coughing from the disease weakens the pelvic floor muscles,” writes the source.

Over time, the symptoms of cystic fibrosis can get worse and create more serious problems, such as liver disease and gallstones, says WebMD. This is due to the build-up of mucus in the pancreas. A blockage here can be extremely damaging, because the pancreas is responsible for producing digestive enzymes, leading to a slew of other problems including pancreatitis, which we already discussed, and liver problems.

“Thickened mucus secretions can also block the bile ducts of the liver, leading to the development of gallstones and cirrhosis. In fact, liver disease is the third most common cause of death in people with CF,” writes Very Well Health.

We’ve already talked about how cystic fibrosis causes the lungs to become clogged with mucus which is what causes frequent infections, wheezing, and shortness of breath. As time goes on it could also increase the blood pressure in the lungs, which is also known as pulmonary hypertension, says Very Well Health.

Pulmonary hypertension is dangerous because it can lead to other issues, such as cor pulmonale, or right-sided heart failure. It can also cause edema, which is the “abnormal accumulation of fluid in the legs and ankles, is a common symptom.” Very Well Health explains that all this accumulative damage can then lead to a condition known as bronchiectasis, making it even harder to clear the mucus in the lungs.

Clubbing is a common symptom of cystic fibrosis that occurs due to the proteins released from the lungs, which is called platelet-derived growth factor (PDGP), says Very Well Health.

“Clubbing (enlargement or rounding) of the fingertips and toes eventually occurs in most people with cystic fibrosis, as well,” writes the Children’s Hospital of Pittsburgh. “However, clubbing also occurs in some people born with heart disease and other types of lung problems,” says the source.

Diabetes is a lifelong condition that affects millions of people around the world. It occurs when the body does not produce enough of the hormone that regulates glucose in the blood or cannot use it effectively. When we hear about diabetes it’s typically in reference to either type 1 or type 2, but for those who suffer from cystic fibrosis, there’s a whole other category of diabetes that they are at risk for.

Cystic fibrosis-related diabetes (CFRD) is a form of diabetes that has characteristics of both type 1 and type 2 diabetes. According to Very Well Health it tends to occur when “mucus accumulates on the pancreas, it can block the islets of Langerhans, which are responsible for producing [the hormone that regulates glucose in the blood]. When this happens, it can lead to the development of cystic fibrosis-related diabetes.”

CFRD has many of the same symptoms as the other two types of diabetes which include increased thirst, urination, fatigue, and weight loss. It can also lead to a further decline in lung function, says the source.

This symptom is quite rare, but it can happen, which is why we’ve included it on this list. In some odd cases, cystic fibrosis can lead to coagulation disorder, which is a condition caused by the malabsorption of vitamin K. The absorption of this vitamin is needed in order for the body to clot blood.

“The disorder is believed to affect babies with CF who were unable to absorb vitamin K in the womb, leaving them with low reserves at birth and a limited ability to absorb vitamin K after birth,” writes Very Well Health. Symptoms of this condition are bruising, excessive bleeding, bleeding gums, nosebleeds, and bloody stools or urine.

A vitamin D deficiency is common in patients with cystic fibrosis because they are unable to absorb fat-soluble vitamins, often get less sun exposure, and have a suboptimal intake of vitamin D-containing foods and supplements. This vitamin is important “to the regulation of calcium and phosphate,” which is why over time it can lead to osteoporosis, brittle bones, height loss, and an increased risk of bone fractures in patients with CF, explains Very Well Health.

You should consult a doctor when you or a loved one has been diagnosed with cystic fibrosis, are experiencing pulmonary symptoms, or any number of the symptoms on this list, says the American Lung Association.

WebMD advises seeking medical advice if you are pregnant or planning to become pregnant and either one of your parents has this condition or there is a family history of cystic fibrosis. As well as if your child tastes salty when you kiss him or her, or if they have frequent lung or sinus infections, in addition to difficulty gaining or maintaining weight.