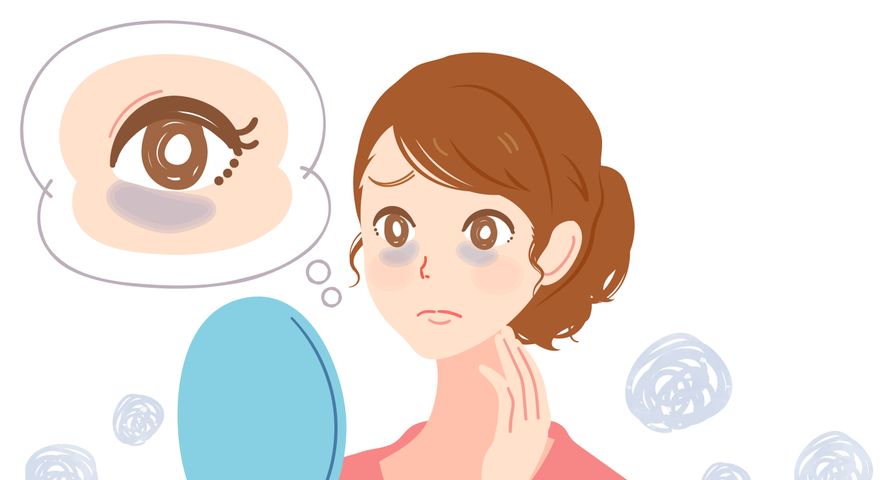 We’ve all been there, dragged ourselves out of bed in the morning after a poor night’s sleep only to find our reflection mirrors how we feel! While they may look alarming, dark under eye circles are not cause for medical concern. A lack of restful sleep is the most common reason dark under-eye circles occur, but there are many others. They could be an indication of poor habits, genetics, or that the body is deficient in something.

Allergies can take quite a toll on our bodies—from sneezing and watery eyes to an itchy throat and sinuses. Nasal congestion is also a common symptom of seasonal allergies, and one that may be contributing to your dark under-eye circles.

According to WebMD, “a stuffed-up nose can lead to swelling of the blood vessels near your eyes and nose, causing the skin to appear darker.” Itching or rubbing the eyes can also emphasize the discoloration. The source adds that dark circles may be particularly prominent during hay fever season.

Stress is the culprit of a wide variety of bodily issues, including pesky dark under-eye circles. If experienced on a chronic basis, stress can affect one’s ability to get sufficient sleep. A lack of needed rest “can make the skin appear more pale and the eyes more sunken, both of which can make dark circles more noticeable,” notes WebMD.

Additionally, when the body is under stress more blood is sent to the vital organs, which can leave the face looking pale—pronouncing the appearance of dark circles. High stress can also damage the capillaries surrounding the eyes, causing them to leak blood. As the blood oxidizes, it will appear dark purple.

A lack of sleep isn’t the only deficiency that can cause dark circles. When not enough water is consumed the skin cells can shrink, causing dryness and a lack of elasticity.

And since the skin under the eyes is so thin to begin with, LiveStrong says “it becomes transparent when you are dehydrated, thus making the circles under your eyes more visible.”

Those dark under-eye circles? You may have got them from your mama. According to Women’s Health, dark circles may be the result of a genetic condition called periorbital hyperpigmentation.

The source says that it is particularly common among people with darker skin tones, as they have “more melanin in their skin, and sometimes they produce extra pigmentation below their eyes.”

Soaking up some rays may give you a nice sun-kissed glow, but it may also be the culprit of your dark circles. The Mayo Clinic says this is because sun exposure “prompts your body to produce more melanin, the pigment that gives skin its color.”

Women’s Health adds that too much exposure to UV radiation can also “damage the DNA in skin and kill them off.” Dark circles become more pronounced as a result of this damage affecting the vessels in the membrane under the eyes.

Aging also plays a large factor in the development of under-eye circles. As you age, the skin naturally loses some of the fat and collagen that supports the skin, which can make the blood vessels in the under-eye area more obvious.

Women’s Health points out that the skin’s elasticity will also weaken, leading to more sagging of the skin, further pronouncing your bags.

The liver isn’t the only part of the body affected by drinking alcohol. WebMD says that dark circles may become more prominent because “alcohol allows the small blood vessels in the skin to dilate, or expand.”

Smoking is another unhealthy habit that can increase the appearance of bags under the eyes. The source says they will occur regardless of whether a person smokes traditional or electronic cigarettes.

Dark circles may also indicate an underlying health concern, such an anemia—a lack of healthy red blood cells or hemoglobin, which carry oxygen to the cells.

Anemia is most commonly due to an iron deficiency, which WebMD says “affects the circulation of the blood and can lead to dark circles under the eyes.” Women are particularly at risk of developing iron-deficient anemia due to menstrual cycles and insufficient nutrients in the diet.

Fatigue from oversleeping or staying up late is one of the most common causes of dark circles under the eyes. It’s probably the first thing people assume when they see someone with dark circles under their eyes. According to Healthline, “sleep deprivation can cause your skin to become dull and pale, allowing for dark tissues and blood vessels beneath your skin to show.”

The source also suggests that the dark shadow people seemingly see underneath a person’s eyes might be from their puffy eyelids. The puffiness is from the lack of sleep which causes a build up of fluid beneath the eyes.

Those of us who work in front of a computer screen all day long know a thing or two about eye strain. Staring at a screen, whether it be a computer screen, phone screen, or even a television, will cause the eyes to become strained. “This strain can cause blood vessels around your eyes to enlarge,” writes Healthline. “As a result, the skin surrounding your eyes can darken.”

Too Much Sodium or Caffeine

You’d think that since caffeine is what gives us that extra boost of energy in the morning that it’d be useful in curing those dark circles under the eyes, but it could actually be one of the causes. People who eat salt-heavy foods before bed will wake up with bags under their eyes, says Reader’s Digest. “Certain foods with high levels of sodium and caffeine content will cause your body to retain water, aggravating the skin under the eyes and making them appear darker,” explains the source.

Many people, myself included, would find it extremely hard to part with our morning cup of coffee. For those who just can’t give up that morning cup of coffee, Ami Mallon , global corporate educator for Osmosis Skincare told Reader’s Digest that Niacinamide (a form of vitamin B) could be the solution to keeping the caffeine while also eliminating those dark circles. “This assists with increasing blood flow to areas that may have formerly been stagnant. Niacinamide also has anti-inflammatory and antioxidant benefits,” says Mallon to Reader’s Digest. “Bearberry extract is also a wonderful and natural skin lightener and can help brighten under your eyes.”

Just like coffee, typically makeup is seen as a form of treatment for dark circles since it gives us the opportunity to cover them up! While makeup is great for covering up those little blemishes and flaws we don’t want to showcase, it can also be our worst enemy. There are so many products out there and not all of them are good. Sometimes it’s a matter of quality, but it can also be due to a person’s sensitive skin. We’re all unique, so what works for one person might not work for another.

“Makeup is supposed to hide discolorations and imperfections but if your specific makeup brand is not well tolerated by the body, it can actually cause the exact opposite. Whether it’s an eyeliner, mascara, concealer, or a powder, it could cause irritation or an allergic reaction,” says Rebecca Lee, RN and founder of the natural health resource RemediesForMe.com when talking to Reader’s Digest. If you notice that your eyes have dark circles under them and it’s not due to any of the other reasons on this list, consider a change in makeup products.

Unfortunately, bone structure isn’t something a person can change, so if this is the cause, there’s not much a person can do about it. According to Good Housekeeping who talked to Bruce Katz, M.D., Director of the Juva Skin & Laser Center in New York, the shape of a person’s face could be what’s causing dark circles to form under their eyes. “When people have deep tear troughs under their eyes, the shadowing and indentation can cause the appearance of darkness, but it’s not actually from pigment or veins,” says Katz. The only way to fix this is by getting fillers from a certified professional.

The eyelid skin is the thinnest on the body. The common blue hue is from underlying veins showing through. “Blue veins under your eyes look dark, too, so it makes the eyelids and under eyes appear to have dark circles, but really it’s just the veins under the skin,” says Bruce Katz, M.D. to Good Housekeeping.

Obviously any kind of rubbing or scratching around the eyes will cause some irritation that could lead to dark circles under eyes. Tsippora Shainhouse, MD, board-certified dermatologist in Beverly Hills told Reader’s Digest that people can use hemorrhoid cream under their eyes to shrink the blood vessels that might appear from excessive rubbing and scratching. While this trick might not seem all that appealing, rest assured it’s a time-tested remedy that many models use before photo shoots. It’s a great time saver. If you have a little more time on your hands, you can also try putting some cold cucumbers on the eyes. Reader’s Digest explains that because cucumbers are high in sodium, they draw water out from the under eyes making them look less puffy.

This one is somewhat related to the prior slide about rubbing and scratching eyes. Many people suffer from eczema, a condition that makes the skin red and itchy. While it’s more common in children, it can occur in adults too. Good Housekeeping notes that while the eczema itself doesn’t lead to dark circles under the eyes, the constant rubbing and itching can, just like we mentioned earlier.

“Excessive rubbing can lead to increased swelling, inflammation, and broken blood vessels in the eye area, which can give the skin a dark, almost bruised appearance,” says dermatologist David E. Bank, M.D., Director at The Center for Dermatology, Cosmetic & Laser Surgery in Mt. Kisco, N.Y to the source.

This one might seem a little far fetched, but according to Harold Lancer, MD, a celebrity dermatologist, certain sleep positions can cause dark circles to form under the eyes. Forget lack of sleep causing dark circles, sleeping position is another culprit! Lancer told Reader’s Digest that those who sleep on their stomach or side are at a higher risk because of the way the pillow folds into the face and puts strain around the eyes.

He encourages sleeping on your back, when possible. “Try to sleep on your back, which doesn’t just benefit your face, but also prevents wrinkles from potentially forming on your chest. You may also want to consider sleeping with an extra pillow when your eyes are extremely puffy, since elevating your head will get the fluid to move away from your lids,” he says.

We touched on this earlier in the slide about fatigue, but the skin around our eyes can actually retain fluid. This is what causes that puffy eyed look and congestion can lead to more pooling of blood in the veins. Reader’s Digest talked to Mahmoud Khattab, MD, of Precision MD who notes that fluid retention isn’t only a result of fatigue. “There are many reasons your body might retain fluids: hormone levels fluctuating temporarily with your menstrual cycle or aging, a high salt diet, medications that encourage fluid retention, and changes in the weather (particularly hot, humid days),” he says.

In addition to hormone fluctuations, fluid retention can be caused by chronic disorders like thyroid disease, kidney disease, and heart ailments. These disorders increase water retention causing the lower lid to sag slightly. Reader’s Digest writes that anyone who notices this happening after taking a new medication should consult their doctor for a prescription change.