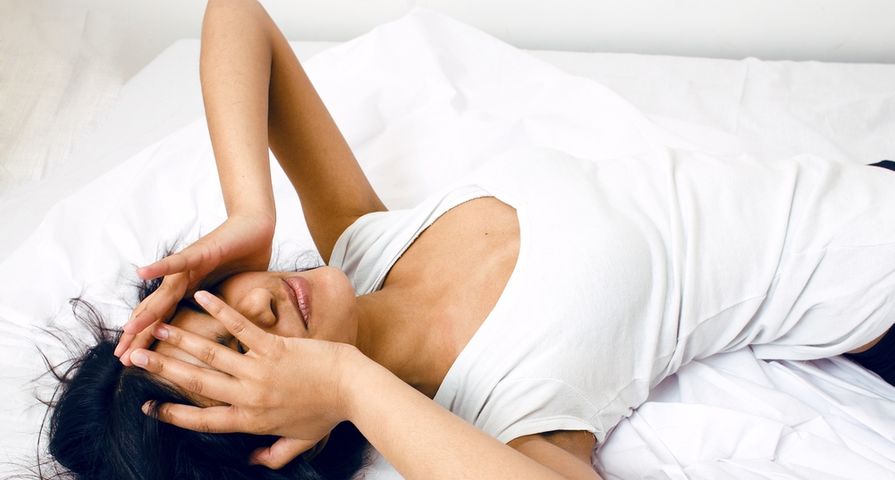 Have you ever awoken from a deep slumber, only to find that you’re soaked in sweat? Whether your pillow is sopping wet or your sheets are drenched, sometimes there’s no discernible reason (even when the room is relatively cool and you’re not layered in blankets).

These can be bouts of night sweats with no medical explanation are commonly referred to in the medical community as Idiopathic hyperhidrosis. However, there may also be some underlying medical causes behind this nocturnal hyperhidrosis. Let’s take a closer look at 13 of them…

This is a stage in a woman’s life when hormonal changes are taking place, namely, a large drop in estrogen. While menopause can cause women to experience “hot flashes” during the day, the same thing can occur while they’re asleep — so you awake damp without knowing a cause, according to WebMD.

More medical professionals are acknowledging what’s being referred to as “male menopause,” which can be temporary (irritable male syndrome) or a permanent drop in testosterone producing symptoms, including feeling too hot and triggering the body to sweat.

Taking certain medications may have a variety of side effects, and one of them is night sweats, according to the NHS (operated by the UK government). Prescription antidepressant medications are often the culprit, adds the source.

However, some over-the-counter painkillers can also trigger nocturnal hyperhidrosis. For example, aspirin has been linked to night sweats, as has the steroid drug called prednisolone, which reduce inflammation, notes the NHS.

When your blood sugar levels get too low, it’s not good. It can trigger problems such as anxiety, dizziness, and blurred vision. It has also been associated with excessive sweating. So, if your blood sugar dips at night, you may be in for a soggy slumber.

Those who are particularly at risk for night sweats from low blood sugar (known clinically as hypoglycemia) are those who are taking anti-diabetes medications, according to WebMD. Perhaps talk to your doctor about ways to keep your blood sugar levels up throughout the night.

The Mayo Clinic mentions one infection in particular called brucellosis. It is passed from animals to humans, most commonly through unpasteurized milk and other dairy products, according to the source.

This infection can cause night sweats, but you’ll likely have other symptoms to get a proper diagnosis, including joint pain, fatigue, and fever. The clinic notes this bacterial infection is typically treated with antibiotics, but can take months to eliminate.

Not to make you panic, but in some cases chronic night sweats could be a sign of something more serious, according to the Mayo Clinic. On its list of night sweats causes, the clinic includes leukemia (a blood/bone marrow cancer), Hodgkin’s lymphoma (cancer of the lymphatic system), and carcinoid syndrome, which the source says is the result of a type of cancerous tumor.

However, you shouldn’t jump to conclusions on this one. If you’re been having night sweats and are concerned about them, make an appointment to see you doctor so they can pinpoint possible causes.

Hyperthyroidism is an overactive thyroid. The thyroid is a gland that controls many of your body’s functions, including your metabolism. This condition puts too many thyroid hormones into your bloodstream, often resulting in anxiety, weight loss, and an “intolerance to heat,” notes MedicineNet.com.

The excessive sweating is the result of your metabolism basically being on turbo. Luckily, there are treatments for this condition, such as antithyroid medications, radioactive ablation, and surgery.

WebMD explains that neurological conditions can lead to an increase in night sweats. The conditions mentioned by the source include autonomic dysreflexia (a sudden increase in blood pressure) and post-traumatic syringomyelia (resulting from a spinal cord injury).

Other neurological issues tied to night sweats include strokes and autonomic neuropathy, which the source explains is “damage to the nerves that help control the involuntary functions of the body.” One of the symptoms can include trouble regulating body temperature and sweating.

This is a problem that can cause you to sweat night and day. While it’s a medically treatable condition, it’s a “condition in which the body chronically produces too much sweat without any identifiable medical cause,” notes WebMD.

However, the same source says there’s “secondary” hyperhidrosis, which is excessive sweating caused by other factors, including some we’ve already mentioned such as certain medications, anxiety, and other medical conditions.

Healthline.com notes that consuming alcohol can trigger night sweats, so be mindful of how much you’re drinking. “Drinking can increase your heart rate and widen blood vessels in your skin. This can trigger perspiration,” it explains.

What’s more, only about 10-percent of the alcohol you consume will leave your body in sweat and urine, while the rest is broken down into byproducts. Night sweats could also be a sign of alcohol withdrawal, which fortunately is only temporary but may be life-threatening.

“Night sweats are a common and distressing anxiety symptom,” explains CalmClinic.com. You may have racing thoughts and be up all hours of the night, “dripping in sweat.”

The part of the brain called the hypothalamus that’s responsible for regulating your internal temperature is affected by deficiencies of estrogen, explains Livestrong.com. This prompts the hypothalamus to release chemicals into the blood to dilate blood vessels and release excess heat. “It is common in pregnancy for a woman to experience night sweats accompanied by cold shivering,” explains the source.

Prevention says that if you’re having night sweats, you may also have an autoimmune condition (when your immune system mistakenly attacks healthy cells and tissues).

Examples of autoimmune disorders include lupus, which can be mild to life-threatening, rheumatoid arthritis, and celiac disease. If you’re having night sweats with no explanation or notice some other changes, check with your doctor, as treating some of these autoimmune conditions early can improve outcome.

MedicalDaily.com explains that being obese can have other associated problems (other than raising your risk of diabetes). While we’ve already mentioned that menopause is one possible cause of night sweats, “Women who are obese have a more uncomfortable time during menopause,” adds the source.

The source was citing a Brazilian study that shows women who are obese have night sweats and hot flashes more often. “This belief basically states that fat insulates the body and helps retain heat, which disrupts the body’s ability to distribute it,” it notes. This link to obesity isn’t exclusive to menopausal women. Other sources note anyone who is obese could be at higher risk for night sweats and other problems at night, including obstructive sleep apnea.