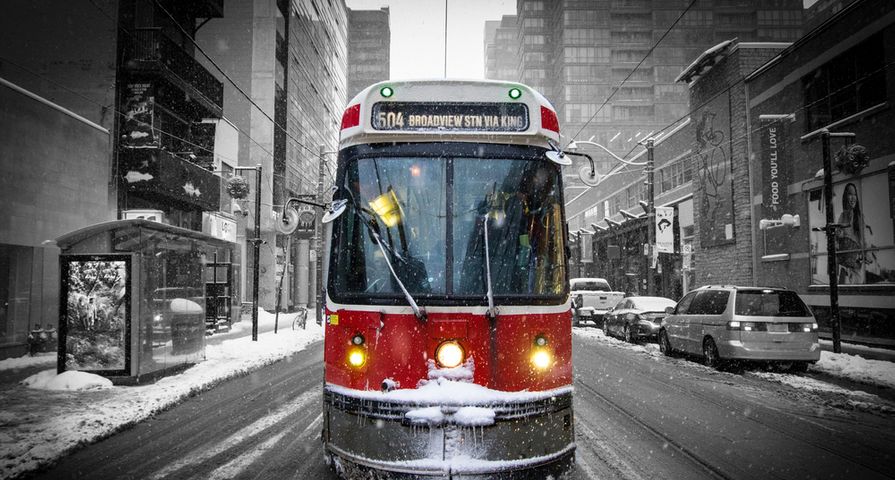 While it may not be realistic in all cases, many people are in a position to ditch their personal vehicle and hop on a bus or subway to get to their jobs (or anywhere, really). While it might be a tough transition at first, there are actually benefits to doing it.

Healthline.com says, “Sitting in a car is probably the least healthy way to commute.” While walking or cycling are the best choices, “public transit, it turns out, is a healthier alternative to driving,” it adds. Let’s look at seven reasons why this is…

HealthLine.com explains further that there’s a direct correlation between the amount of time you spend in a car, and your level of happiness. This is because you can start to feel pressure to get to work on time (sometimes fighting traffic) when you drive yourself, it explains.

This doesn’t just mean that drivers who sit in traffic longer are less happy during their commute; it appears to apply to their overall happiness. “If you put in a full day at work and then have an extended commute, you don’t have a lot of time left to unwind,” explains the source.

Waiting at red lights or stop-and-go traffic may actually be harming your health more than you realize, according to a 2014 article in the Toronto Star. “There’s clearly exposure to all kinds of pollutants, some of which are irritants to the lungs, some of which are not good for your cardiovascular system, some of which are carcinogenic,” reads the article.

Emissions can be even worse when you’re at a standstill, putting more strain on your lungs, adds the source. You could probably make an argument that you’d breathe in some emissions on a bus, but many cities have dedicated bus lanes that mean less stop and go (not to mention you can blame the bus driver for being late for work, and not yourself for leaving too late).

3. You’ll Get More Exercise with Transit

When you take your car to work, your walk is often limited to your front door to your driveway, and then your work parking lot to your desk – maybe a grand total of 100-feet. When you take transit, you often are walking to a transit stop, or going up and down stairs. In fact, “Individuals who use public transportation get over three times the amount of physical activity per day of those who don’t,” according to TransLoc.com.

So if your brisk walking to the transit mode of choice is 22-minutes or more, you’re meeting the daily guidelines set out by the U.S. Centers for Disease Control and Prevention (CDC). This can help lower your risk of serious diseases such as vascular diseases, strokes, cancer and even depression, according to the source.

When you decide to hop on a transit route instead of into your gas-guzzling SUV (that you usually ride to work alone in), you’re helping more than yourself– you’re benefitting everyone around you by reducing your carbon footprint.

TransLoc.com explains that “pollution is estimated to cause as many deaths per year as traffic accidents,” and we’ll talk about safety of taking transit vs. driving next. The source notes that newer buses that use alternative fuels actually produce less pollution per passenger mile than cars.

5. Transit Means Less Chance of Being in an Accident

As a message thread on Quora.com details, there are much fewer deaths per passenger mile in a bus than in a car. The source points out this could be due to the fact bus drivers are seasoned professionals, and less likely to be intoxicated behind the wheel.

However, while buses are safer on the road (also consider that a car running into a bus will probably do a lot less damage than another car), we’d be remiss if we didn’t mention the source also points out that walking to a transit stop can be inherently dangerous (presumably because a drunk driver in a car could run you over on the way there, among other scenarios).

This may tie back into the first point about losing quality time when you sit in traffic to and from work every day, but TreeHugger.com points out that taking transit means “gaining the chance to engage more actively with one’s community and the outdoors.”

The source also explains that even when it’s less than ideal weather for walking, “a little sunshine and even some rain and snow can do the spirit a load of good.” Just make sure you’re dressed for the occasion like any other situation, and you should be fine.

TransLoc.com explains that taking the bus (or other form of transit) is also healthy for your wallet. “Car payments, gas prices and parking can be a major budget drain,” it explains, but choosing transit could line your pockets with significantly more money annually =–$6,251, to be more exact.

The source points out that having more money may translate into better living conditions and the ability to afford a healthier diet, not to mention getting better medical care (and being able to afford health insurance) according to the source.