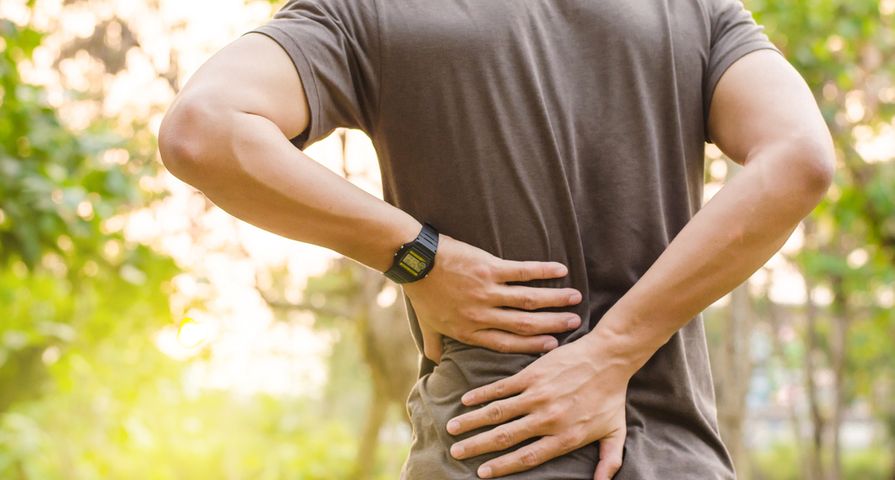 Psoriatic arthritis is a form of arthritis that attacks the tissue in the skin and joints. It’s more common in people who already have psoriasis, a condition that causes red, scaly patches of skin on various areas of the body. In fact, most people with psoriasis are later diagnosed with psoriatic arthritis, but joint problems can occur before any signs of this skin condition.

People with psoriatic arthritis commonly experience pain and stiffness in their joints, typically in the ankles, knees, fingers, toes, and lower back. According to Health, the joints are typically “red and warm to the touch” and are especially stiff first thing in the morning.

Individuals may also feel pain in certain tendons or ligaments, particularly where they attach to the bones. This is called enthesitis, which the Arthritis Foundation says most commonly occurs “at the heel (Achilles tendinitis) or the bottom of the foot (plantar fasciitis), but it can also occur in the elbow (tennis elbow).”

Swollen fingers or toes, known medically as dactylitis, are another common symptom of psoriatic arthritis. This sausage-like swelling, which affects approximately 40-percent of people with the condition, occurs along the entire length of the finger or toe and is caused by inflammation of the tendons.

This helps to distinguish it from other forms of arthritis, where swelling is often confined to the area surrounding a single joint. According to Health, this symptom may appear even before the person experiences any joint issues.

Psoriatic arthritis also tends to cause changes to a person’s nails, both on the hands and feet. Most commonly, the individual will see discoloration and pitting, which are small dents or depressions in the nail.

In some cases, the nails may also appear to be infected or separate from the nail bed entirely. These symptoms tend to help physicians diagnose the condition, as the Arthritis Foundation says they “are unique to psoriasis and psoriatic arthritis.”

According to Everyday Health, “Up to 57-percent of people with an inflammatory rheumatic disease like psoriatic arthritis experience severe fatigue,” which can occur as a result of the inflammation caused by the disease, as well as the emotional distress of dealing with the condition.

Health Union says this fatigue may present itself as “extreme tiredness, difficulty keeping eyes open, or flu-like symptoms.” Along with fatigue, the source says, “Patients also reported symptoms such as lack of motivation and loss of appetite.”

A person with psoriatic arthritis may also experience eye problems as a result of the condition, such as inflammation in the iris, which WebMD says “can cause pain that gets worse in bright light.”

The Arthritis Foundation adds that this inflammation can cause “redness, irritation and disturbed vision (uveitis) or redness and pain in tissues surrounding the eyes (conjunctivitis, or “pink eye”).”

This inflammation can cause pain and stiffness in the lower back, as well as other areas of the body, such as the buttocks, neck, and upper back. Although rare, Heath says, “In about 5-percent of people, spinal symptoms are the only manifestation of psoriatic arthritis.”

Chest Pain or Shortness of Breath

In rare cases, people with psoriatic arthritis may experience chest pain or shortness of breath. WebMD says, “These might happen when the chest wall and the cartilage that links your ribs to your breastbone get inflamed.”

As Everyday Health indicates that people with psoriatic arthritis have a “58-percent greater risk for a serious cardiovascular problem, such as a heart attack,” it is important to report these symptoms to a physician right away.