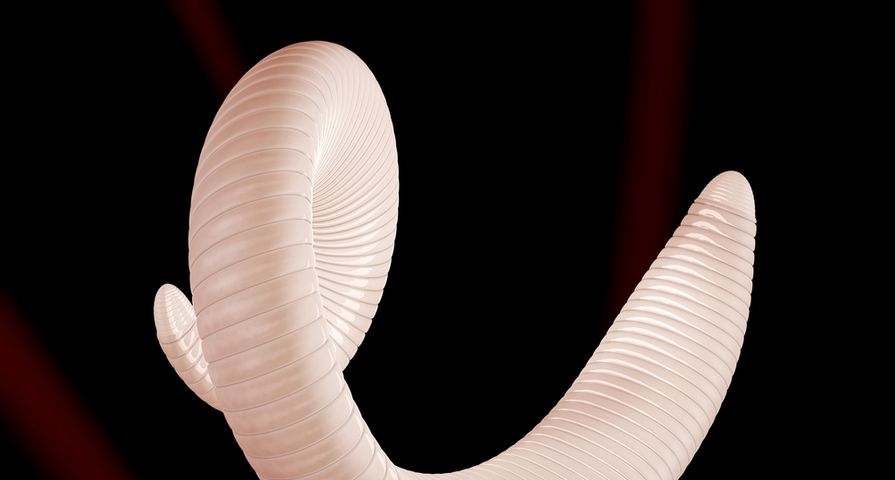 You might think having a parasite is something only out of a horror movie, but it can actually happen to anyone. Even with the higher standards of food safety in the U.S. compared to undeveloped countries, parasites are “far more common than you think,” according to MindBodyGreen.com.

The site notes there are a number of different parasites that can end up in your intestines such as roundworms, tapeworms, pinworms, whipworms, and hookworms, and you may have different symptoms depending on which is invading your gut. Once the parasite has been identified, it can be targeted with medications. Here are 12 signs you may be host to a parasite…

BodyEcology.com says that if you have chronic digestive issues that don’t go away, even when you’re eating healthily (including “good bacteria”), there’s a chance you may be harboring a parasite. These digestive issues could present themselves as pain, gas, or bloating, notes the source.

The site offers remedies to help recover from parasites, but notes that, even if you don’t have a parasite, “it can sometimes take as long as six months to completely cool down an inflammatory response in the gut.”

Australia’s Department of Health explains that a certain infection can cause itching in and around the private parts. The particular parasite responsible for itching is called a threadworm or pinworm, which as the name suggests, “look like tiny white threads and live in the intestine,” notes the source.

The site explains that female threadworms lay their eggs near the opening of the anus, which can activate itching in that area. A risk of this is that people may scratch the area too much, which can break the skin and lead to infection.

This might sound like a problem you’d only encounter in 16th-century England, but it still occurs regularly around the world. It’s usually contracted by people who have taken a tropical vacation, and it’s the result of parasites or bacteria, according to MedBroadcast.

One type of dysentery, called amoebic dysentery, is caused by a parasite living in the large intestine, notes the site. Dysentery itself has many unpleasant symptoms, including marked diarrhea with blood or mucus, sudden onset of fever, abdominal pain, loss of appetite, fatigue, and dehydration.

Parasites eat what you’re eating, meaning they feed off the nutrition of your food before your body has a chance to absorb all the vitamins and nutrients. The Huffington Post explains that a parasite infection could be the reason you’re feeling tired all the time.

One group of parasites is worms that attach to the lining of the small intestine, which can lead to loss of nutrients, explains the source. Another category of parasites is called protozoa, which are single-celled organisms and can trigger unusual symptoms including fatigue, dizziness, and even joint pain and hives. Because the parasites are sucking away nutrients, another symptom is weight loss.

As if the thought of having worms living in your gut isn’t enough to make you feel sick, the parasites themselves will help ensure you do. The Clinic of Complementary and Osteopathy Medicine (WiseHealthCenter.com) explains that a “fairly common symptom” of parasitic infections include nausea and/or vomiting.

These particular symptoms can be triggered by a parasite in the digestive system, most commonly the intestines. “It is within this area of the body that many parasites mature and even breed, which can prompt nausea and vomiting in many people,” explains the site.

The Huffington Post published an article in 2016 that explains people experiencing “rage disorder” are twice as likely to have a parasitic infection from undercooked meat or contaminated water. The Post explains it further solidifies the link between physical and mental well-being.

The article notes research by the University of Chicago that found a “relatively harmless infection” called toxoplasmosis might be responsible for cases of Intermittent Explosive Disorder, which it describes as “a mental health condition that triggers recurrent outbursts of aggression in situations that don’t necessarily call for it.” The source adds that an estimated 30-percent of the population has toxoplasmosis, and healthy people likely won’t have any symptoms.

AskNature.com explains that parasitic worms dampen the immune response in humans, which may leave the door open to other illnesses. It explains that helminths, which are parasites that have evolved over millions of years, “must quell their host’s immune system to successfully colonize.”

The article refers especially to an increased chance of developing inflammatory bowel disease (IBD) from parasites, as the immune system works overtime to cleanse the intestines. Interestingly, children raised in hygienic environments may be more susceptible to IBD, as their immune response is less developed than those living in developing countries.

Science magazine says if you’re suffering from allergies, then parasites may be to blame, not environmental factors. It says that many people are allergic to peanuts and pollen because these two entities contain molecules “similar to those found in parasites,” which exaggerate the immune response.

Using computers to compare protein sequences and structures, a research team found 2,445 proteins in parasites that closely resemble allergenic proteins. One of these findings is a protein in Schistosoma mansoni (a water-borne parasite) that mimics a protein in birch pollen that makes people sneeze.

It explains some people have an excess of this fungus because of diet (including consuming chlorinated water) or antibiotic use, which can throw off the balance of healthy bacteria in the body and set the stage for Candida yeast infections due to the parasites thriving in the body.

WellnessMama.com says if you’re dealing with parasite overgrowth, then you may experience heightened sensitivity to strong perfumes or cigarette smoke.

It adds you may also become more sensitive to certain chemicals or foods, while also developing food cravings for sweet and starchy foods (Candida yeast thrives on sugar).

WellnessWatchersMD.com explains that canker sores, which are relatively small but painful ulcers in your mouth, could be caused by “bowel flora imbalances” from parasites, among other reasons.

If you constantly have sores in your mouth, then you may need a doctor to help rule out parasites. Other more probable causes include an allergy to wheat or other grains, and we’ve already mentioned how parasites can cause allergy flare-ups.

Sometimes, the signs of parasites are more obvious, because they’re on your exterior rather than hidden in your interior. AmyMyersMD.com says the skin condition eczema, an autoimmune issue, could be a sign of parasites in the intestine. “That’s why one of the major causes of autoimmune diseases, including eczema, is a poorly functioning intestinal tract,” it explains.

It lays out a 4-step program to address “leaky gut syndrome,” which is basically removing the parasites and inflammatory foods, replacing deficient digestive enzymes, re-introducing beneficial bacteria, and repairing the gut lining with the right nutrients that promote healing. Of course, a doctor, dietician, or naturopath might be able to direct you more in this area, as some parasites can cause unexplained rashes on the skin.