Signs of a Sinus Infection 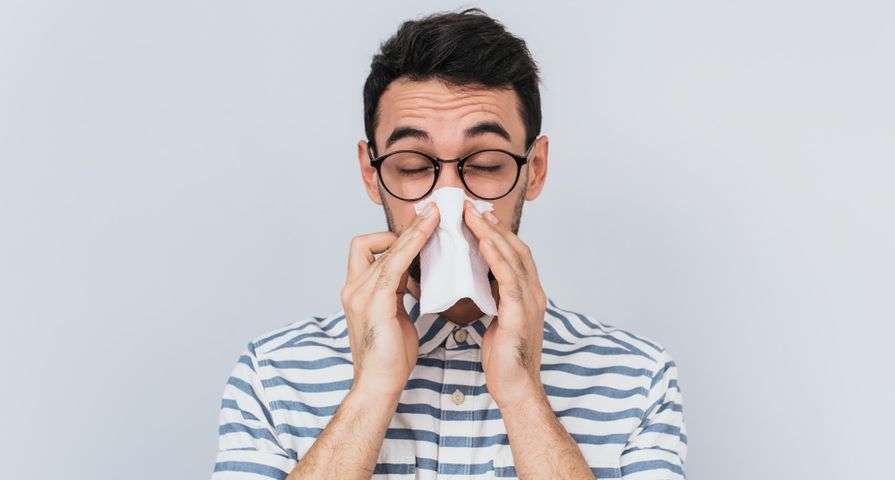 Busting Common Myths About The Flu Vaccine
We all know the feeling. You’re run down, stuffed up, feverish, and maybe a little chilly with a sore throat and an annoying post nasal drip. Don’t shrug it off as the common cold. You may very well have a sinus infection, or sinusitis.

You might think it’s just a cold, but before you run to the pharmacy for over-the-counter cold medication, check for these 14 signs of a sinus infection…

The inflammation of the sinuses, which is the main sign that you have a sinus infection and not just another cold, will manifest as severe pressure that feels like a dull, throbbing pain behind the eyes or cavities behind the forehead, nasal bones, and cheeks (where your sinuses are located).

Many sinusitis symptoms mimic the common cold, but the 37 million unfortunate Americans who suffer from this painful inflammation of the sinuses each year are on constant high alert when it comes to that cold or allergy, which may lead to another nasty sinus infection.

Many folks with sinus infections complain that their head feels heavy. This occurs when the sinus pathways (that connect the sinuses to your nasal passages) become so congested with mucus that they’re unable to drain, resulting in pressure on the nerves of the face.

However, before you consider antibiotics, consider these study findings published in the Journal of the American Medical Association, which found that drug resistance was a common occurrence when antibiotics are prescribed for a sinus infection. The study monitored 166 patients with sinus infections–half who were prescribed over-the-counter medications and the other half who were prescribed a 10-day course of antibiotics (i.e., amoxicillin). After day 7 of the treatment, the symptoms of sinus pain, runny nose, post nasal drip, and cough only slightly improved for both those prescribed antibiotics and over-the-counter medications.

An achy pain across the top teeth is common in those with a sinus infection. What you’re feeling isn’t actually tooth pain, but pressure in the area due to inflammation of the sinuses, which can feel like a toothache. According to research from Dentistry Today, sinusitis can affect any of the seven sinuses (or air filled cavities) located in the head.

The seven sinuses include the sphenoid, maxillary, frontal, ethmoid, and mastoid sinuses. In fact, chronic sinusitis is one of the more prevalent chronic illnesses in the U.S., due to several causes including sinus infection, allergies, chemical irritation, sinus, obstruction, and tooth infection.

Because sinus infections cause the sinus membranes to become extremely inflamed and congested with mucus, it makes perfect sense that you may feel off balance, particularly if you tip your head forward or stand up really quickly from a seated position.

According to the University of Maryland Medical Center, sinusitis is characterized as inflamed sinuses, meaning the air filled cavities around your cheeks, nose, and eyes become painfully swollen and blocked due to an accumulation of fluid from infection with a cold virus, fungus, or bacterial. When sinusitis occurs, the sinuses can’t drain, which often impacts balance and coordination causing dizziness.

A nasty morning cough will often be mistaken for the common cold. However, a sinusitis cough will be at its worst first thing in the morning after you’ve been prone all night and the sinuses have drained down the back of your throat. According to medical professionals, sinusitis affects the sinus cavities, which are the mucous-producing air filled cavities behind the cheeks, nose, and eyes. When sinuses become blocked or inflamed, sinus pressure builds up.

Because mucous becomes lodged, it can begin to drain down the back of the throat (called post nasal drip) and cause severe coughing and the need to clear our throats more often. Postnasal drip can be more severe during sleep because of the prone position causing severe cough and disrupted sleep.

Postnasal drip results when excessive mucus is expelled by the nasal mucosa. However, if the sinuses are inflamed, the watery, clear mucus accumulates and drains down the back of the throat from the nose. When we are healthy and the sinuses are clean and clear, excess mucus in the sinuses exits via a tiny opening into our noses on a regular basis via sneezes and blowing our nose.

However, when a sinus infection occurs, sinuses become congested and obstructed with sticky mucus, which blocks and builds up pressure in the sinus cavities (i.e., behind the teeth, cheeks, teeth, nose, eyes, and forehead) when mucous can’t be expelled via its normal route. This is how postnasal drip begins, when mucus has no choice but to drain down the back of the throat.

Difficulty breathing through the nose due to blocked or inflamed sinuses will often lead to a decreased sense of smell and taste. According to the U.S. Department of Health and Human Services, taste and smell disorders can occur with any blockage in the sinuses, including a sinus or other upper respiratory infection.

Sinusitis will often cause loss of smell (or hyposmia) when sinuses become congested, swollen, or experience extreme pressure. Taste and smell are both largely dependant on entering the nasal vault. When odours enter the nose, they enter the nasal vault and dissolve on the thin mucus layer, which stimulates smell receptors. However, while mucus is responsible for dispersing scents to the underlying receptors, excess mucus or blocked and inflamed tissues can impair the smell response. To complicate matters, the sense of taste is intimately connected to the sense of smell.

People affected by the common cold usually don’t have a fever. However, those with a serious infection, such as sinusitis, typically experience an increase in body temperature as the immune system attempts to purge the infection. A cold becomes a sinus infection when the sinuses become severely inflamed or swollen. Normally, the sinuses are clear airways; however, when they become blocked and filled with fluid from a viral, fungal, or bacterial infection, it becomes difficult for your body to fight off the infection.

Symptoms of the common cold and sinusitis can often overlap. However, sinus infection includes the symptoms of sinus pain and pressure (i.e., around the eyes, teeth, cheeks, and forehead), thick yellow nasal discharge, smelly nasal discharge, severe headache, fever, and cough due to postnasal drip. You should be suspicious if a cold just gets worse rather than better. If your cold continues for more than 10-days or worsens, you may likely have sinusitis.

While you might think it rude to inspect your mucus, it’s hard not to take a peak if you’re producing an overabundance of the thick, sticky stuff. Usually with sinus infection the consistency of your mucous will be different. For instance, it may become thick and yellow. This may be indicative of a sinus infection, as the white blood cells fight off the infection and as they drain (or try to eliminate the infection) from your body.

Also, the texture of mucus may change character with a sinus infection. For instance, mucus may become much thicker when you blow your nose or try to clear your throat. Additionally, mucus may appear yellow or green in color, which according to WebMD, is a clear signal that you may have an infection.

A nasty headache, which is usually caused by increased sinus pressure, can linger for days with sinusitis, as the tissues become inflamed and the muscles tighten around your eyes and forehead. According to the Mayo Clinic, sinus headaches are headaches characterized by sinusitis, an infection that blocks or inflames the membranes lining the sinuses.

A sinus headache may result from increased mucus, fluid, and infection buildup (bacterial, viral, or fungal) that causes extreme pressure and pain. A sinus headache may present as pain and pressure in the sinuses (a feeling of fluid fullness in the areas of the teeth, cheeks, and brow) accompanied by pain and throbbing in the upper teeth and/or decreased taste and smell, and the pain that often worsens when you bend forward or lie down and obstruct (the flow of mucus).

In addition to the unpleasant symptoms already mentioned, sinus infections can also cause you to experience bad breath, or halitosis. The Colgate-Palmolive Company says, “Bad breath is often the first side effect [of a sinus infection] as the sinuses drain into the back of your throat.”

Due to an excess build up of this discolored and smelly mucus in the sinus cavities, air can no longer pass through the nose. As a result, you are forced to breathe through your mouth, and when you exhale, “the odor from the infection transfers to your breath,” says the source.

Have you been feeling sluggish and worn out lately? Not getting much sleep at night? It may be a sign of a sinus infection. When your body is battling an infection, the immune system becomes strained, which can lead to exhaustion and lethargy that persist for lengthy periods of time, sometimes months on end.

Fatigue is rarely the sole symptom you’ll experience with a sinus infection. So be mindful of whether you’re suffering from any of the other symptoms already mentioned, particularly sinus inflammation, congestion, and postnasal drip.

With postnasal drip, mucus is forced to drain down the back of the throat because the sinuses are obstructed and it has nowhere else to go. Because this isn’t how mucus is normally expelled from the body, the throat can become irritated.

Healthline explains that “it may start as an annoying tickle,” but can worsen to the point of the throat feeling raw, achy, and inflamed, especially if the infection lasts for several weeks or longer. Eventually, you may even find that your voice becomes hoarse, making it uncomfortable to talk.

Like tooth pain, ear pain may seem unrelated to a sinus infection, but is in fact a very common symptom. As WebMD explains, “Your sinuses and ears are connected inside your head. So sinus congestion and stuffiness can affect the pressure in your ears.”

As a result, you may experience pain in the ear canal, or it may feel as though the ears are blocked, which can cause your hearing to be muffled. Fortunately, Livestrong.com says there a variety of different home remedies that can provide effective relief for ear pain, such as warm compress, elevating the head, and using nasal sprays or rinses. As always, however, be sure to consult with your doctor before trying to treat things on your own.

Influenza Statistics From This Year