Common Signs and Symptoms of a Blood Clot 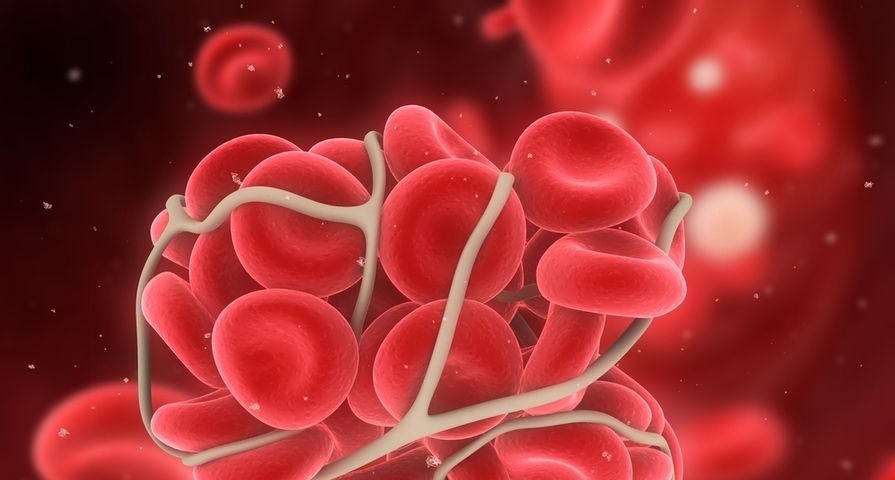 Blood clots typically form deep within the veins of the legs, which is referred to as deep vein thrombosis (DVT), and can travel through the body. In addition to being potentially life threatening, one of the scariest parts about a blood clot is that most times they go undetected, resulting in pulmonary embolism and death when leg clots break free and become lodged in the lungs.

In order to protect ourselves from this potentially dangerous condition, read up on the 15 most common signs of a blood clot…

A sudden onset of fatigue or exhaustion is a common health-related warning sign, and it’s no different for a blood clot that could be forming somewhere in the body, either in the arm, leg, brain, belly, or chest.

Swelling often occurs at the site of the blood clot in the body. If it’s in the arm or leg, the entire limb could swell up. In addition to swelling, it will usually become discolored, either red or blue, and become warm and itchy. When a clot forms in the leg it’s called a DVT. This scenario is serious because the clot can travel through the bloodstream into your lungs and become a pulmonary embolism. If a clot forms in the leg, it often begins in the calf and typically feels like cramping or soreness.

This particular symptom can be very scary, because it could mean the blood clot has travelled into the lungs. According to WebMD, trouble breathing that is also accompanied by a persistent cough, is one of the most common early warning signs of a pulmonary embolism. Not surprisingly, this is an alarming situation and should be taken seriously. If this happens, call 911 and get medical help right away.

If a blood clot travels to the lungs it is referred to as a pulmonary embolism, which as we previously mentioned can be life-threatening. A pulmonary embolism happens when a blood clot (which usually starts in another part of the body, such as the leg) travels into the lungs and blocks a blood vessel. One of the main symptoms to watch for is chest pain or general discomfort while breathing. Due to the pain, it can also be difficult to take a deep breath.

A blood clot in the lungs isn’t the only thing we should be weary of when it comes to chest pain. It could also mean a clot has formed in one of the arteries of the heart, which WebMD warns could lead to a heart attack.

We’ve already discussed some of the warning signs of a blood clot in the lungs, heart, and limbs, but this particular symptom is commonly associated with a clot in the kidneys. WebMD says the main danger here is that it could block the body from removing waste leading to high blood pressure and even kidney failure. In addition to pain in the belly, legs, or thighs; nausea; swelling in the legs; and trouble breathing, a clot in the kidneys can cause a high fever or sweats.

The combination of chest pain and shortness of breath can also lead to feeling lightheaded or dizzy and even result in fainting.

A rapid pulse is yet another warning sign and symptom of a pulmonary embolism. It’s not uncommon for a clot from a DVT to break off and travel through the bloodstream to another potentially more dangerous area in the body, like the lungs or heart. Seek medical attention right away if you experience an increased heart rate, in addition to chest pain, shortness of breath, and a worsening cough.

If you begin to feel discomfort in your chest and a cough appears seemingly out of nowhere after spending several hours in a tight or cramped space, or even after just sitting for a lengthy period of time, it could mean a blood clot that started elsewhere in the body has traveled and is now at risk of blocking a blood vessel in the lungs.

One of the reasons a DVT is so scary is because it often shows no symptoms at all. At least with a showcase of symptoms we know to seek medical attention, but sometimes the damage is done before we even know it’s happening. Therefore it’s important to take preventative measures so that it doesn’t happen in the first place. Try to avoid sitting for lengthy periods of time, because a person is more likely to get DVT if they haven’t moved around, like during a long flight, work day, or surgery.

As previously mentioned, the Mayo Clinic lists a bad cough and coughing up blood (known clinically as hemoptysis) as one of the symptoms of a pulmonary embolism. That is in addition to chest pain and shortness of breath.

The restriction in blood flow that is caused by a blood clot can also result in the affected individual experiencing a great deal of pain. This pain tends to be limited to the area where the clot is located.

For instance, if the clot is in your lungs you may experience chest pain. Or if it’s in or around your heart, you feel pain in the chest or arm. WebMD indicates that this pain generally intensifies as the clot worsens and “can range from a dull ache to intense pain.”

Along with pain, tenderness is another common symptom of a blood clot. It is especially common when the clot is located in the leg, where the skin surrounding it becomes sensitive to touch, despite how deep within the tissue the clot is.

Even though there may be a clot in only one of the legs, this tenderness often presents itself in both legs. This occurs because, in an effort to relieve the discomfort in the leg with the clot, we tend to rely more heavily on our other leg to support us, which can cause muscle and joint pains and strains.

13. Skin that is Warm to the Touch

With blood clots, the temperature of the skin may also change, specifically in the area where the blood clot is located. The skin in this area will feel warm to the touch, and occurs as a result of a disruption in blood flow.

Thrombocyte.com adds that the warmth may also “be a representation of a persistent feeling of tingling at the site of the clot,” and tends to be highly localized. For some, elevated skin temperature near the blood clot may be accompanied by symptoms such as throbbing and itchiness as well.

Calf pain is another commonly reported symptom, particularly when a blood clot has formed in the lower leg. This pain is often described as feeling like a muscle cramp or charley horse, and tends to occur because there is a DVT in a major blood vessel.

But because muscle cramps are common and can occur for a variety of reasons, people may dismiss this as the cause for their pain, not recognizing it as being due to a blood clot. Livestrong.com points out, however, that muscle cramps tend to occur abruptly and only last a few minutes, whereas calf pain from a blood clot “comes on gradually” and “can persist for days or weeks.”

Redness is certainly the most common skin discoloration associated with blood clots and is generally present at the site of the clot, but other types of skin discoloration may occur as well. For instance, the skin surrounding the location of the clot may become pale as a result of decreased blood flow to these areas.

As the clot worsens and blood flow become even more restricted, the skin may even take on a bluish color and will feel noticeably cooler when you touch it. If this happens, be sure to make an appointment with your physician immediately.