Best Cities to Visit in Canada 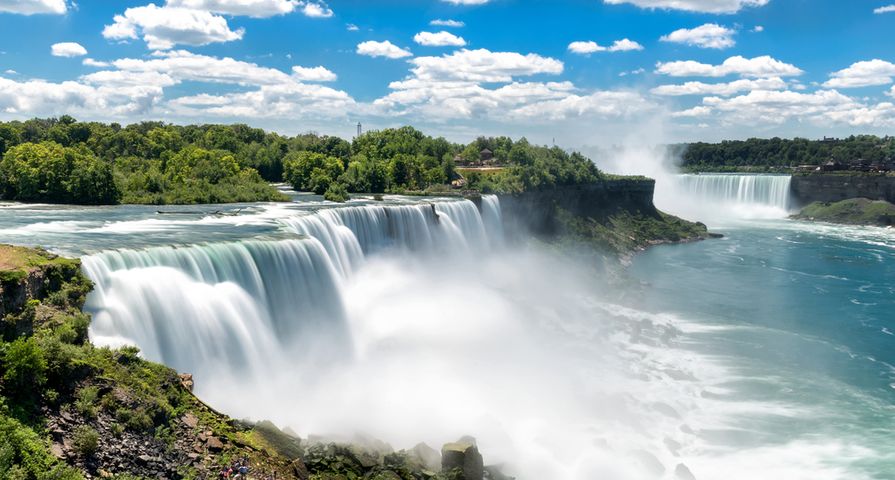 From coast to coast, Canada is a beautiful country with diverse landscapes and beautiful cities. Whether you’re a Canadian resident or a visitor from abroad, there’s plenty to do and see. Canada is the second-largest country in the world, geographically, and according to U.S. News and World Report’s 2021 Best Countries Report, it’s the best country in the world based on a variety of factors, including quality of life for its citizens, safety and social purpose.

Whether you’re chasing epic ocean views, planning a family ski trip or looking to spend a wild weekend in the city, there’s a place in Canada for your next big vacation. Keep reading as we count down the top 12 best cities to visit in Canada.

Situated in the heart of Canada’s prairies, Saskatoon is located on the South Saskatchewan River. The city and its nearby areas are known for being a hub of agricultural activity, but the truth is, Saskatoon has so much more to see than just farmland.

If you’re lucky enough to spend summer in Canada’s prairies, you can take advantage of the full range of activities a vacation to Saskatoon has to offer. That includes picking flowers or Saskatoon Berries at one of the city’s nearby farms, shopping at the Farmer’s Market in Riversdale or even venturing a short distance outside the city to spend a weekend camping on Lake Diefenbaker near Elbow, Saskatchewan. If you’re in Saskatoon outside of the summer months, there’s still plenty you can do to stay entertained. Take a tour of Remai Modern Art Museum, explore the street murals that decorate the city or head to the Western Development Museum to immerse yourself in Saskatchewan’s history.

With a population of just over 700,000, Winnipeg is a small Canadian city with a lot to offer. It’s home to some incredible attractions, including The Forks, an indoor/outdoor market that features shops, restaurants, a farmer’s market and incredible views of the Red and Assiniboine Rivers.

Winnipeg is a great destination for those looking to immerse themselves in Canadian culture. It’s home to more than 40 museums, including natural history and science museums, art galleries and historic buildings. For those visiting Winnipeg in the autumn, Culture Days, which runs in September and October each year, features a variety of free, engaging activities and events for visitors of all ages.

Ottawa is Canada’s capital city and home to the country’s parliament buildings. It also features a variety of great activities for those with a sense of adventure, regardless of the time of year you choose to visit.

In the winter, Ottawa features opportunities for skiing and skating, while the Britannia Winter Trail provides residents and visitors with a safe place for urban hikes, cross-country skiing, winter piking and even snowshoeing. In the summer you can spend your days bungee jumping, rafting on the Ottawa River or unwinding at the city’s Nordik Spa Nature, which features an outdoor hot spring as well as saunas, swimming pools and spa treatments.

At Canada Olympic Park, located near the western edge of the city, exciting activities are offered year-round. They include ziplining, downhill skiing, luging and bobsledding. Calgary is also home to the National Music Centre at Studio Bell, an interactive museum that allows you to explore music history in a variety of fun ways.

Niagara Falls is among Canada’s most spectacular tourist attractions. The falls intersects the Canada-U.S. border, and along the Canadian side, there’s plenty to do and see.

Clifton Hill is among the most popular tourist attractions in the city. This strip encompasses several blocks and features everything from gift shops and museums to restaurants, hotels and trendy boutiques. You can even take a dip in the waters below the falls at places like Windmill Point, which features a relaxing sandy beach and is overseen by trained lifeguards throughout the day.

Located on the west coast of Canada along the Pacific Ocean, Vancouver is one of Canada’s largest cities. This destination makes a great location if your ultimate vacation goals include sandy beaches and exciting nightlife.

Locals and tourists looking for sand, surf and swim can fulfill their dreams at Kitsilano Beach or English Bay Beach. Alternatively, a visit to Granville Island can get you up close and personal with the Pacific Ocean while visiting some of the city’s best pubs and local vendors. As night falls, Gastown or Vancouver’s Main Street have plenty to offer when it comes to bars and nightclubs.

Halifax is the heart of Atlantic Canada, and when you visit this stunning city, you’ll see there’s no question as to why. It’s full of friendly people, great food and sprawling views of the Atlantic Ocean.

If you’re a foodie, you’ll love dining on fresh-caught seafood at the city’s oceanside restaurants. Some of the best items you’ll find on the menus here include shrimp, scallops, mussels and of course, lobster. Halifax is also known for its wild nightlife and is home to more bars per capita than any other city in Canada. Visit Argyle Street in the city’s downtown district for a diverse selection of bars, pubs and nightclubs.

St. John’s is the capital of Newfoundland and is among the oldest (and easternmost) cities in all of North America. Settled more than 500 years ago and incorporated as a city more than 130 years ago, St. John’s is a sight to be seen for any history buff.

It features an array of historic buildings and sites, as well as museums and galleries that introduce you to the history of Canada’s Atlantic provinces. When you’re not soaking up the history of Newfoundland, you can spend your time in this small city visiting vibrant pubs, shopping unique local boutiques or strolling through this very walkable city to take in all the sights and sounds it has to offer.

Toronto is Canada’s largest city by population, with more than 2.7 million residents. This diverse city is a great place to visit any time of year, with sandy lakeside beaches and outdoor markets in the summer and festivals, shopping and ice skating in the winter.

Head to Toronto in September to be a part of the Toronto International Film Festival (TIFF), a weeklong event that attracts more than 450,000 visitors to the city each year. Toronto also hosts a variety of other exciting annual events throughout the year, including the Canadian National Exhibition, an end-of-summer fair that features rides and other attractions, as well as the Bud Light Dreams Festival, an annual electronic music festival that lights up the shores of Lake Ontario every summer.

If it’s a mountain vacation you’re after, Banff is the ultimate Canadian destination. With a multitude of ski and snowboard resorts, this small Canadian city is renowned for its winter landscapes.

Banff is primarily a tourist destination. In fact, during the 2019/2020 tourist season, the city drew more than 4.12 million visitors. While skiing and snowboarding are the main attractions in this quaint Alberta city, there’s plenty to do when you’re not on the slopes. Walk Banff’s main street to shop a variety of local boutiques and luxury shops, take a trip up Sulfur Mountain to soak in one of its natural hot pools or book a reservation at Grizzly House, Banff’s notorious (and delicious) fondue restaurant that was once a swingers-only hangout.

Victoria’s winter weather is much warmer than in most Canadian cities, making it a great wintertime vacation destination. If you’re able to visit during the holidays, be sure to take in the light displays at Butchart Gardens. In the warmer months, spend a day at Fisherman’s Wharf to view an array of colorful float homes and shops, dine on fresh fish and chips and if you’re lucky, catch a glimpse of sea lions in their natural habitat.

Montreal is commonly thought to be among the most beautiful cities in Canada. The city’s unique architecture, paired with European charm, sets it apart from Canada’s other big cities like Toronto and Vancouver.

While French is the city’s official language, most people here are fluent in English, making it easy to acclimate to the culture. During your stay, be sure to visit Old Montreal and Notre-Dame Basilica to get a feel for the city’s history.

Kimberly Dixon is a freelance writer from Calgary, Canada. While she's covered a vast selection of topics, she's most passionate about creating content that encourages readers to live a healthier, more mindful lifestyle. Aside from writing, Kimberly's hobbies include painting and playing music.