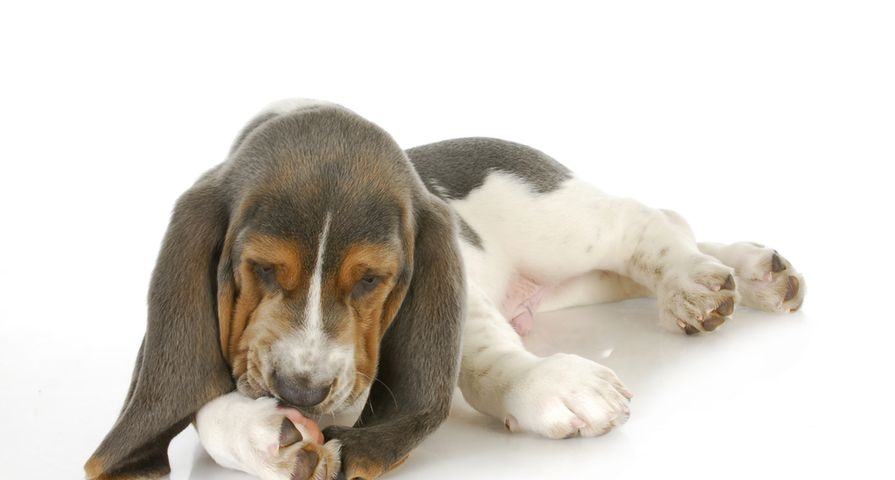 Alternately known as acral lick dermatitis, lick granuloma is a skin condition that affects pets. While lick granulomas sometimes occur in cats, they are primarily seen in dogs. They occur when a dog has a strong urge to lick itself compulsively. This licking is usually isolated to the lower part of one of the animal’s legs, and over time, it results in the formation of a thick, plaque-covered lesion.

While lick granulomas themselves are not harmful to your pet’s health, they often signify the presence of underlying physical, psychological, or emotional stress that should be addressed as part of your treatment plan. It is also possible for the lesion to become infected with bacteria, or for an abscess to develop in the adjacent internal tissues.

Symptoms and Causes of Lick Granuloma in Dogs

Dogs that are left alone for long periods of time are thought to be more likely to engage in the compulsive licking behavior that causes lick granulomas. Some veterinarians believe that lick granulomas are more likely to develop in active dogs that lack adequate outlets or releases for their energy, while others think that dogs take to licking themselves simply as a way to pass the time. One prevailing theory is that this licking behavior is a kind of canine form of obsessive-compulsive disorder, while another posits that the licking releases endorphins, causing your dog to become “addicted” to the behavior. 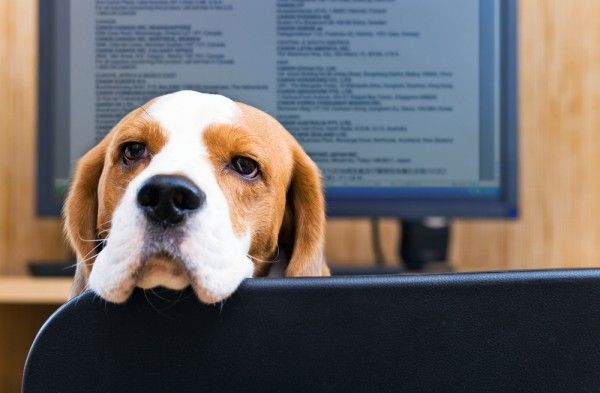 Beyond boredom, other psychological stimuli are thought to contribute to compulsive licking. It may be a manifestation of separation anxiety, in which the dog becomes distressed when separated from its guardian or left on its own for an extended period of time. Dogs are highly social pack animals, and some do not take well to solitude.

Alternately, the licking can be caused by the psychological and emotional stress that comes with the arrival of a new child or a new pet in the household. Neighbor dogs that are aggressive or invade your pet’s territory can also trigger similar stress reactions. 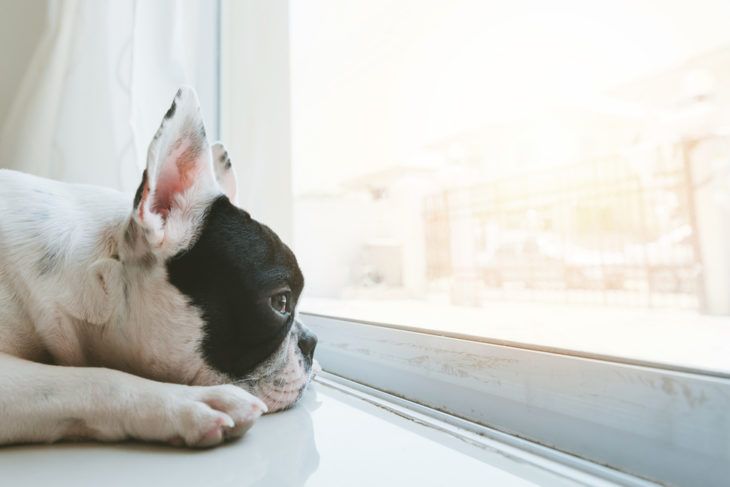 Some vets and researchers think that lick granulomas result from inhaled allergens that cause dermatitis, or skin irritation. The dog then takes to licking itself to relieve its irritated, itchy skin, and the licking becomes habitual. It is possible to perform tests to determine if your dog has allergies, so this could be an option if you’ve noticed early warning signs or symptoms of lick granuloma. However, as of now, this is just a theory and has not definitively been proven by clinical evidence. 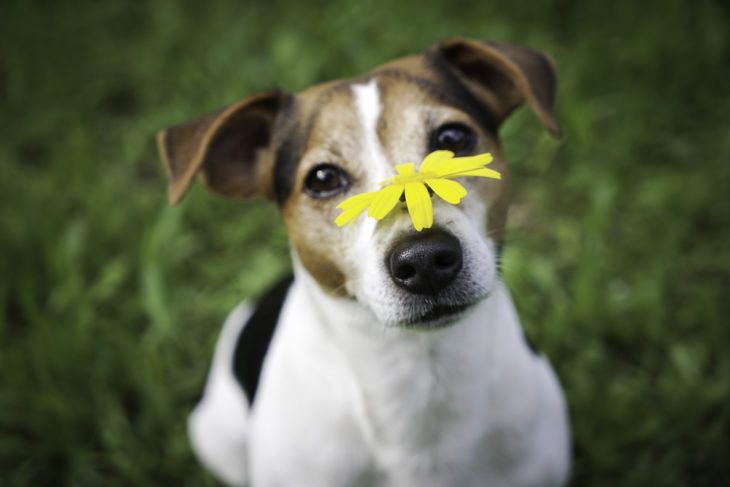 Possible Cause: Joint or Bone Pain

Another theory is that dogs take to licking the lower parts of their legs when they have joint pain or bone pain in the area. The licking is theorized to help relieve the pain that may be present, at least psychologically. It is a kind of comfort reaction, related to the canine obsessive-compulsive behavior theory.

If your dog has a history of leg injuries, or if you suspect that your dog has recently sustained one and has taken to licking its leg, keep your eyes peeled for the development of a lesion. 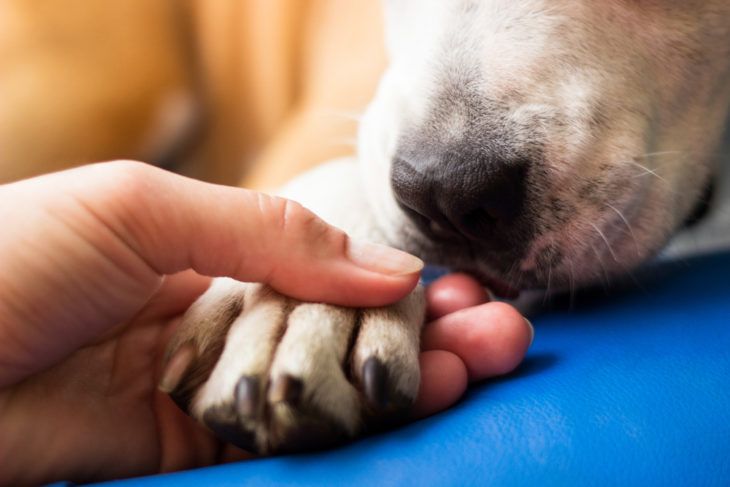 Clinical research has found that hypothyroidism, or limited function of the dog’s thyroid gland, has contributed to the development of lick granulomas in some dogs. For reasons researchers do not fully understand, the clinically significant links between hypothyroidism and lick granuloma seem to be particularly prevalent in Black Labrador breeds.

The symptoms of hypothyroidism in dogs include fur loss, weight gain, lethargy, loss of muscle mass, reduced heart rate, and recurrent infections of the ears and/or toenails. If you notice these symptoms, seek veterinary attention as a preventative measure. 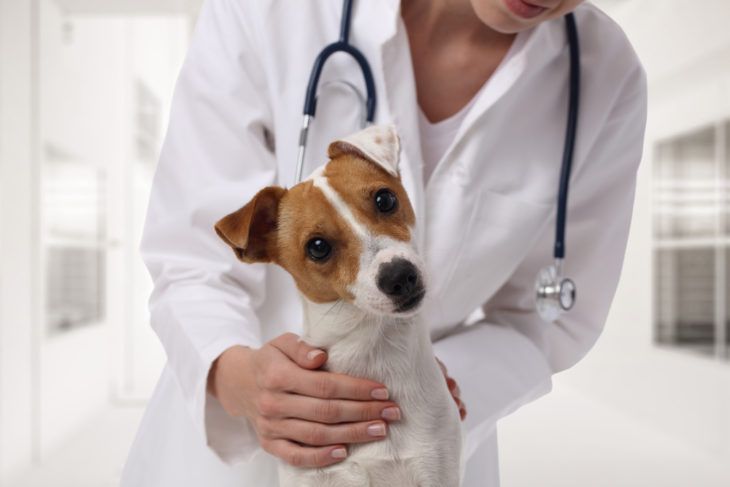 One of the two definitive symptoms of lick granuloma in dogs is compulsive licking. In the majority of cases, this licking is concentrated on one of the dog’s legs, usually in the lower part of the leg near its paw. However, the licking can focus on other parts of the dog’s body, with the next-most-common area being the base of the tail.

It is normal for dogs to lick themselves from time to time. However, lick granuloma is associated with compulsive, continuous licking that recurs over an extended period of time. 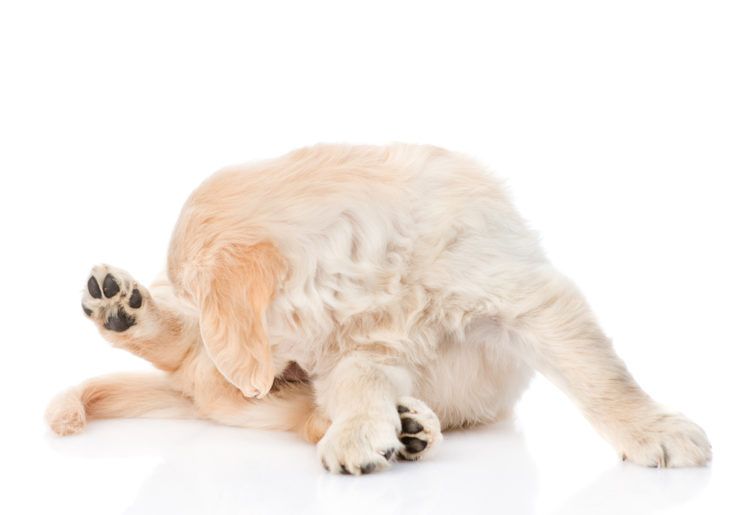 The lesions associated with lick granuloma start out as small, inflamed red spots in the area where the licking takes place. Over time, as the dog continues to lick itself, the lesion will grow into a swollen and inflamed sore that may bleed. As the condition continues to develop, the lesion will acquire an oval-shaped and thick plaque covering. This covering is technically known as the granuloma.

These granulomas can become infected or abscessed. In such cases, treatment will be needed to relieve the complication. 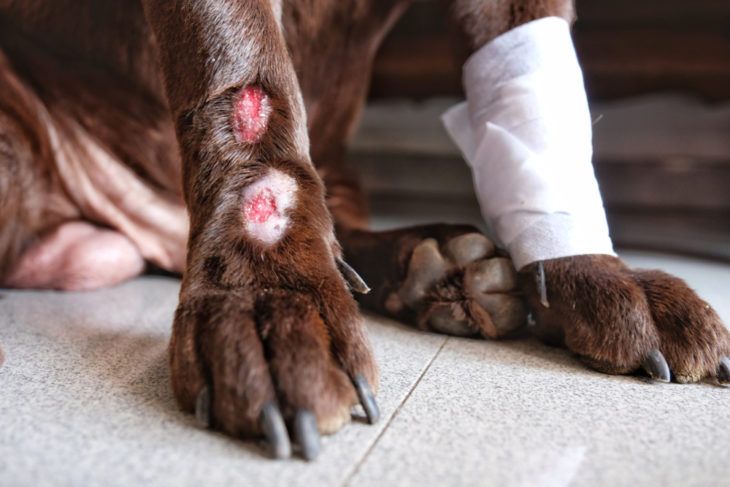 Treatment of Lick Granuloma in Dogs

Treatments for lick granuloma are highly dependent on correctly identifying and addressing the underlying cause. Options include:

If the underlying cause is psychological, emotional, or behavior-related, interventions should address these factors. Dogs with separation anxiety should not be left isolated or confined. Some vets think that dietary changes can help relieve the compulsive behavior associated with lick granulomas.

Various antidepressants and endorphin blockers can also be administered to prompt your dog to alter its behavior. These drugs inhibit the release of the endorphins that are believed to propel the compulsive licking. However, they need to be used in conjunction with other interventions, as dogs are likely to relapse once the drugs are discontinued if they are not reinforced with nonmedicinal interventions. 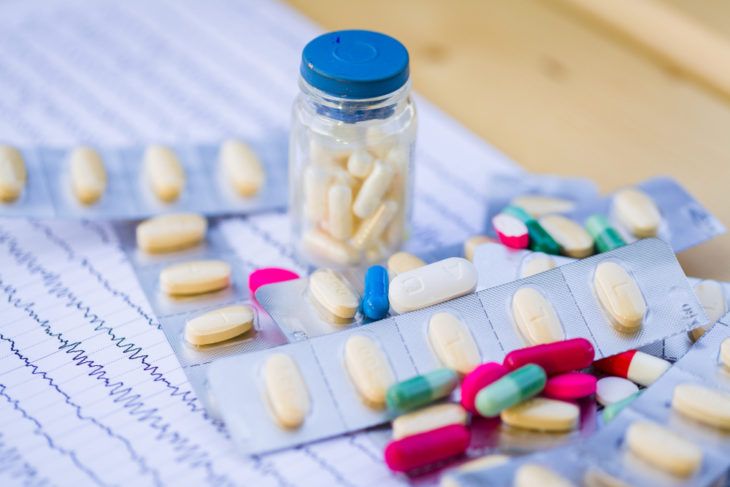 Dogs with lick granulomas, and dogs that display the licking behavior that causes these lesions, should undergo allergy testing. Simple tests can determine if your dog is allergic to specific substances, and it can quickly identify any problem allergens. You can then take steps to eliminate these allergens from your home, which may improve your dog’s condition.

Thyroid medication can help control hypothyroidism, if it turns out your dog has an underactive thyroid. Evaluating thyroid-related symptoms and testing your pet’s thyroid levels will determine the presence or absence of a thyroid condition.

Various topical treatments that reduce itching may stop your dog from compulsively licking itself, if itching is an underlying cause. Alternately, you can purchase specialized collars that physically prevent  your dog from licking itself, or apply ointments with flavors that dogs dislike to discourage continued licking.

In the early stages of lesion formation, the application of topical corticosteroids may shrink the lesion and prevent it from worsening. However, the lesions are likely to recur if the underlying licking behavior is not corrected. 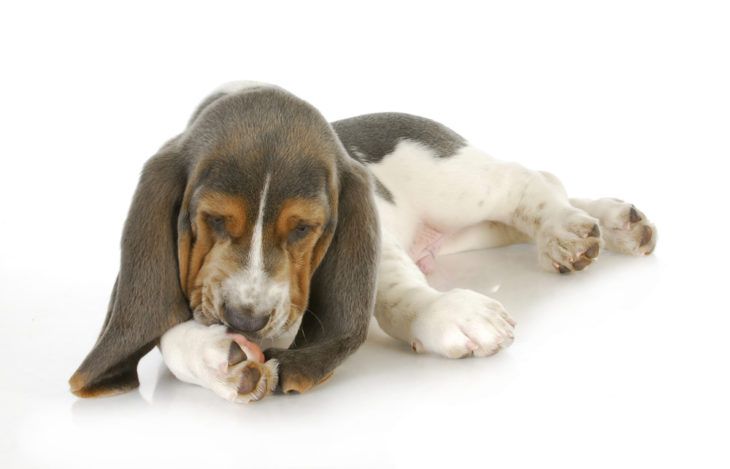 Orally administered antibiotics can be used to bring any associated infections or abscesses under control. If your dog develops a lick granuloma lesion, it is important that you pay close attention to the affected area for signs of infection, which include inflammation, swelling, and the presence of pus. Infection complications are the major health risk associated with lick granuloma in dogs, so it’s important to take prompt action if you notice any possible signs of infection. 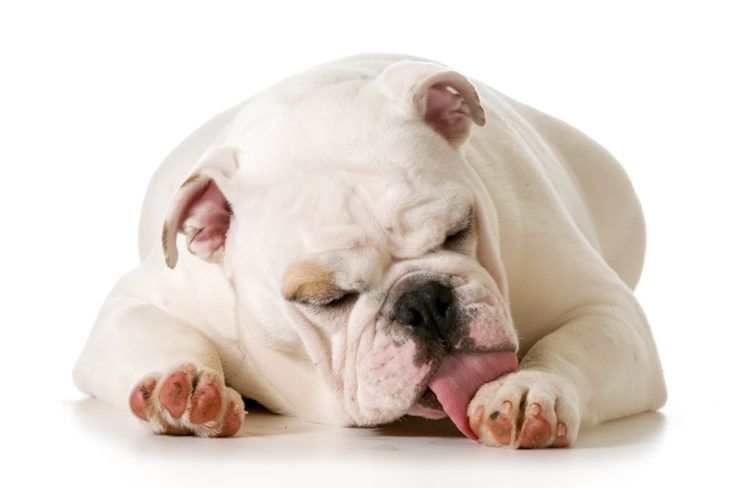 In extreme cases, and if no other interventions have been successful, the surgical removal of the lesion may be an option. Such procedures do come with a significant set of risks, though, since dogs may self-mutilate the treated area as it heals after surgery.

It is also important to note that lick granulomas can be difficult to treat. Current statistics suggest that the condition is brought under adequate control in only about 65 percent of cases. 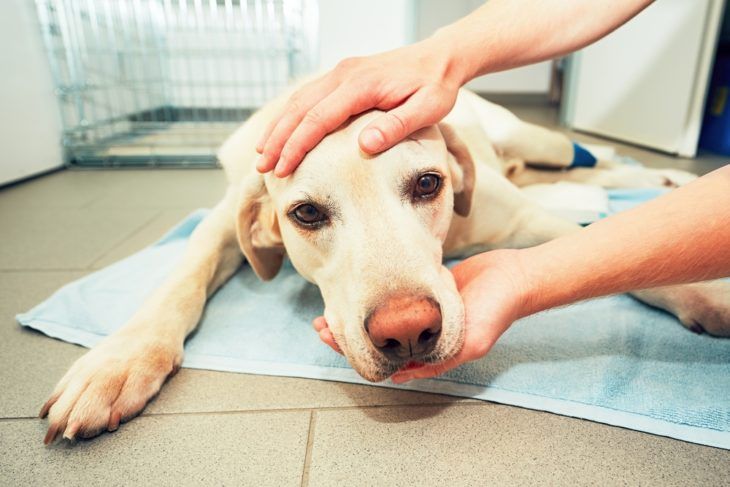