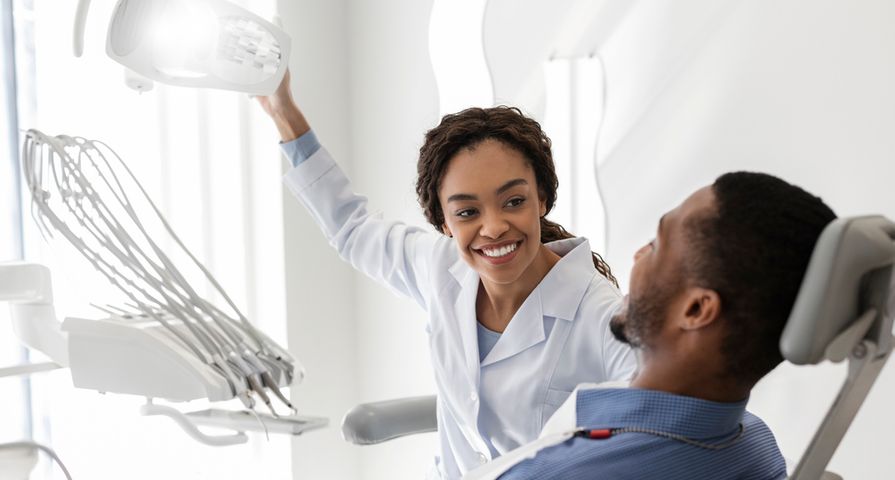 Periodontitis, also known as gum disease, is a serious gum infection in which the soft tissue becomes damaged. Untreated gum disease can destroy the bones that support your teeth and it can even lead to tooth loss. Although common, it is very preventable.

To help you get informed, we’re sharing everything you need to know about gum disease starting with the common signs and symptoms to look out for. We’ll also explain the four stages of gum disease and the treatment options available as well as what you can do to help prevent it from developing in the first place. Let’s dive in!

The symptoms of gum disease can vary, especially depending on the stage of the disease you have. That said, in general, gum disease may cause bad breath, bleeding gums when you brush or floss your teeth, and you may experience pain when chewing. Red, tender, or swollen gums are also common.

Other typical symptoms include receding gums, a buildup of plaque or tartar on your teeth, a foul taste in your mouth, and loose teeth. However, it’s important to point out that the early stages of gum disease don’t often cause noticeable symptoms. Healthline says your dentist will likely notice it first and point it out to you. 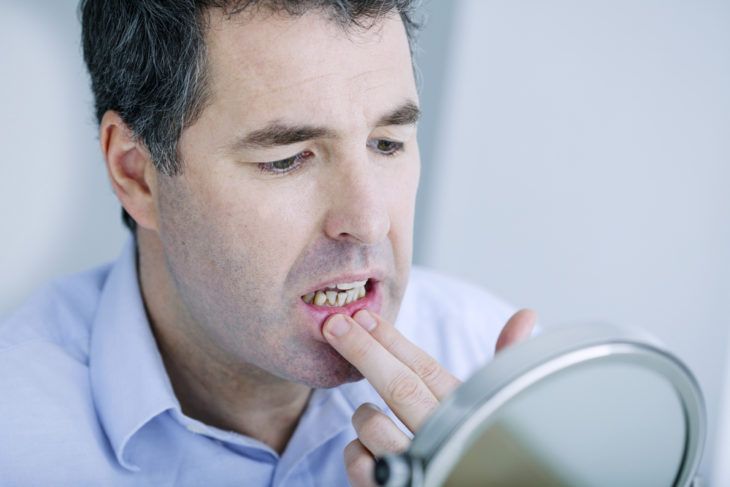 The Stages of Gum Disease

Healthy gums should be firm and pink. They should also be attached to your teeth. Poor brushing and flossing habits can lead to plaque buildup and eventually periodontal disease (gum disease).

Periodontal disease is an ongoing gum infection that can be broken into four stages, with each stage progressively getting worse. Only one of the stages is reversible so it’s important to get informed and do everything you can to prevent it from progressing. Let’s take a look at the stages of gum disease next! 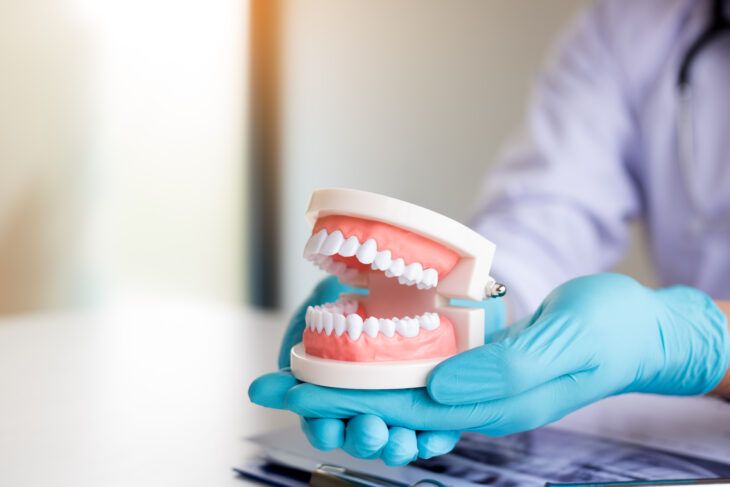 The first stage of gum disease is known as gingivitis, in which your gums will become inflamed. Healthline says one of the “first signs of gingivitis is that your gums will bleed when you brush or floss your teeth.”

Pasadena Periodontics says gingivitis is the only stage of periodontal disease that is reversible. This is because it hasn’t had time to attack your bones yet. As soon as gingivitis is detected it’s imperative that you get it under control. Gingivitis can often be subtle so it can be hard to spot. The source says some signs to watch out for include swelling and redness of the gums, occasional bad breath, and bleeding when brushing or flossing. 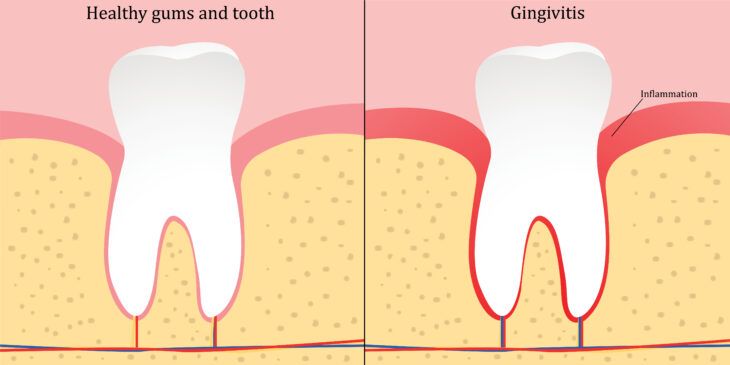 As gum disease progresses, it will transition from gingivitis to the next stage, known as slight periodontal disease. During this stage, your gums will begin to recede and pull away from your teeth. When this occurs, small pockets will begin to form which hold onto harmful bacteria.

The bacteria become aggressive and may begin to cause some bone loss. Once you’ve entered this stage, it’s not reversible. However, Pasadena Periodontics says it is manageable. Unfortunately, the source says simple oral hygiene won’t be enough to manage it. 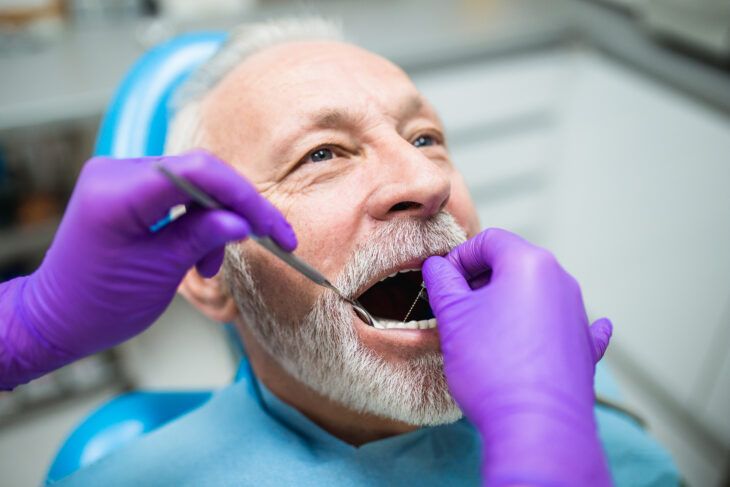 If left untreated, your condition can progress to the third stage, known as moderate periodontal disease. Your symptoms will likely get worse too. Bleeding and pain around your teeth and gums are the most common.

Your gum recession will be greater too, about 6 to 7-millimeters, says Pasadena Periodontics. This is a serious cause for concern as your teeth will lose bone support and become loose. It’s also a problem because it allows for even more bacteria to enter the gums which can attack your bones, bloodstream, and immune system, leading to an inflammatory response throughout your body, says Healthline. 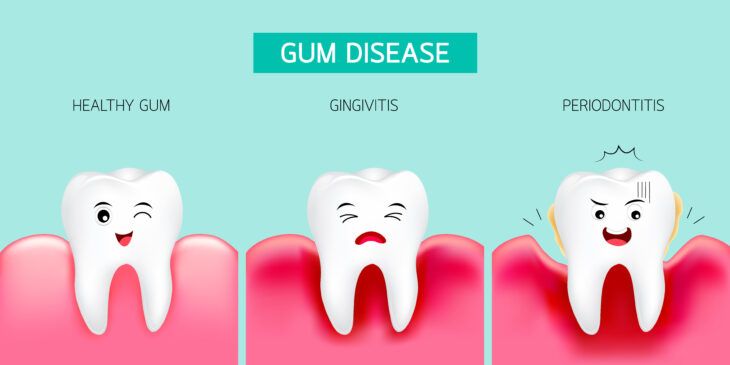 The final stage, stage four, is known as advanced periodontal disease. The infection becomes even more serious putting you at a 50- to 90-percent risk of bone loss, says Pasadena Periodontics.

This advanced stage doesn’t just cause bone loss, it can also cause red, swollen gums that may contain pus. It can also cause loose teeth, painful chewing, and severe bad breath, explains Premier Periodontics.

Unfortunately,  this stage requires a more invasive form of treatment to clean the bacteria-filled pockets, which we’ll get into more detail later. Treatment is important because, without it, stage four periodontal disease may lead to gum recession, gaps between the teeth, and dentures may become necessary. It can also pose a risk to your overall health too, especially if bacteria enter your bloodstream. 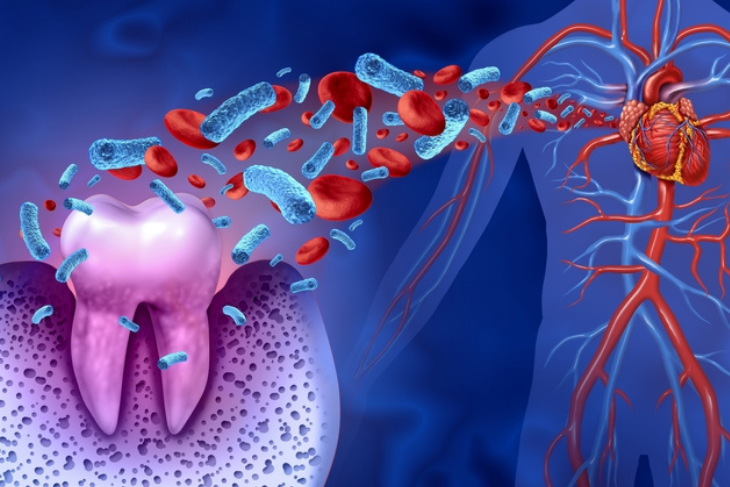 Everyone has bacteria in their mouth, and most of them are harmless. However, when you don’t practice proper oral hygiene every day, that bacteria can grow and build up on your teeth. With that in mind, gum disease is most often caused by poor oral hygiene habits, says Healthline.

When you don’t regularly brush and floss your teeth (and skip dentist checkups), bacteria can multiply and form into dental plaque. If the plaque isn’t removed, over time bacteria can deposit minerals within the plaque known as tartar. This is a cause for concern because tartar “will encourage more bacterial growth toward the root of the tooth,” explains the source.

Over time, your gums can become inflamed, your gum can become detached from the tooth and a periodontal pocket can form, creating a space for harmful bacteria to multiply. All the more reason to practice good oral hygiene habits every single day.

While anyone can get gum disease, certain factors may increase your risk. One of the biggest risk factors for gum disease is smoking. If you develop gum disease and smoke, treatment may also be less effective, and it also makes it harder for your gums to heal, says the Centers for Disease Control and Prevention (CDC).

Healthline notes other possible risk factors such as type 2 diabetes, obesity, hormonal changes in women, and conditions that impact your immune system. If you take medication that reduces your flow of saliva in the mouth or consume a poor diet you may also be at risk. Genetics can also play a role in the development of gum disease, says the source. 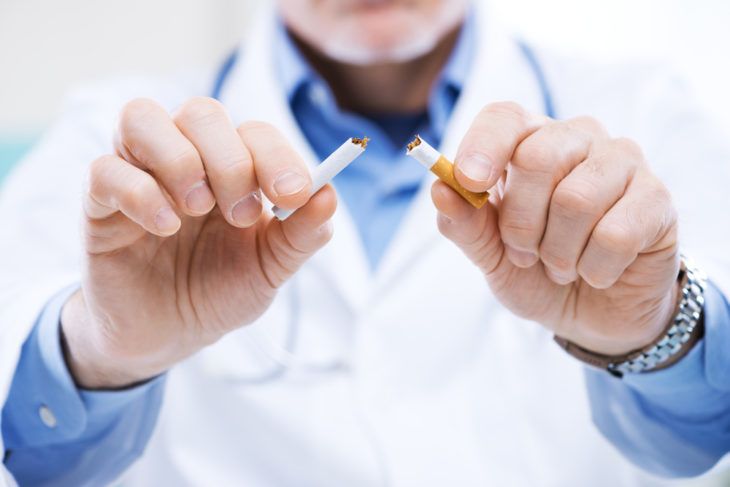 The Complications of Untreated Gum Disease

If left untreated, gum disease can cause painful abscesses, and it can destroy the supporting structures of your teeth — even the bones of your jaw. As a result, this can cause your teeth to loosen and in some cases, they might even fall out.

Gum disease doesn’t only affect your oral health. It can also impact your overall health. The National Health Service (NHS) says gum disease may increase your risk of other health complications such as diabetes, stroke, and even heart disease. The source also notes gum disease is linked to dementia and problems in pregnancy. 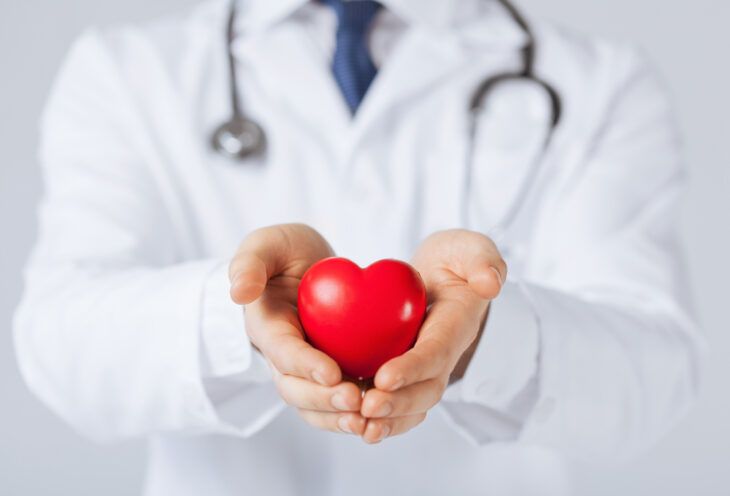 As mentioned earlier, gum disease doesn’t typically present noticeable symptoms in the early stages. This is why it’s so important to not skip regular dental checkups. Your dentist will be able to detect the early signs of gum disease with a periodontal examination, which is typically a part of your regular check-up.

During this exam, your dentist will use a periodontal probe to measure the sulcus (pocket) between the tooth and gums, explains Advanced Dentistry. An X-ray may also be necessary and in some cases, your dentist may refer you to a periodontist who specializes in periodontal disease for further testing and treatment. 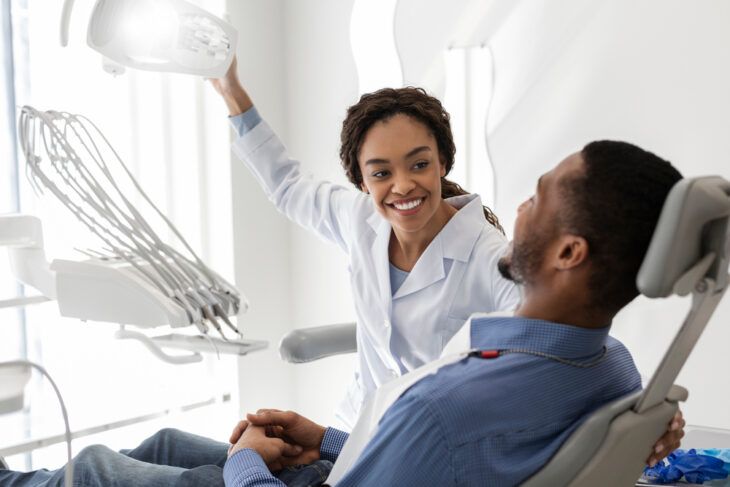 The best course of treatment will depend on how advanced the disease is. Less invasive procedures can be used if periodontitis isn’t advanced, says the Mayo Clinic. One form of treatment is scaling which “removes tartar and bacteria from your tooth surfaces and beneath your gums,” explains the source. 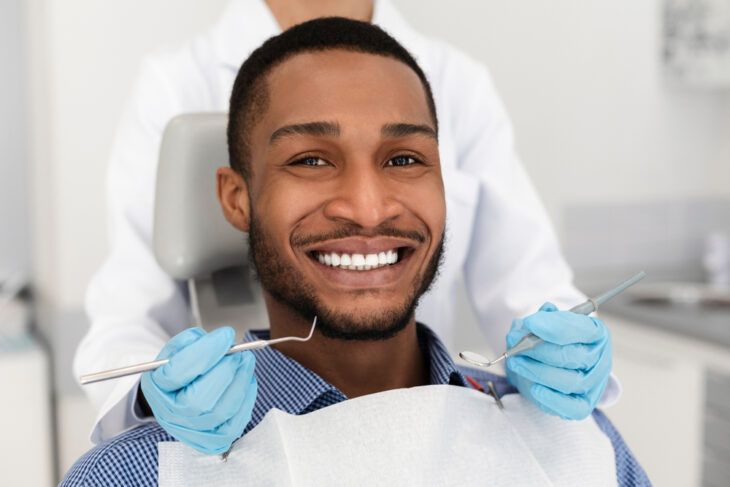 For more advanced periodontal disease, treatment may include surgery. One possible surgical procedure is called flap surgery or pocket reduction surgery. The goal of this surgery is to clean the deposits under your gums. It’s done under anesthesia and your gums are lifted to be cleaned. Once cleaned they’re sutured back into place, explains Healthline.

If you have gum loss, a soft tissue graft may be necessary. This involves “removing a small amount of tissue from the roof of your mouth (palate) or using tissue from another donor source and attaching it to the affected site,” explains the Mayo Clinic. Bone grafting is another procedure that may be necessary if you have bone loss. What type of surgery you need will depend on the severity of your condition. 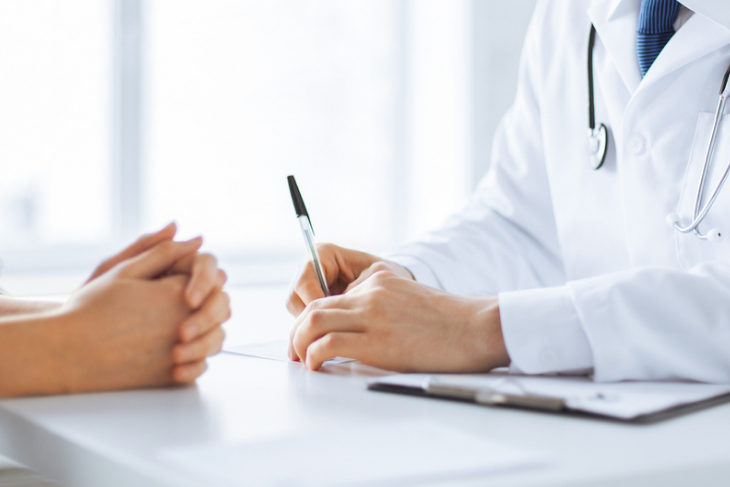 How To Prevent Gum Disease

As mentioned earlier, the only stage in which periodontal disease can be reversed is during the first stage, gingivitis. After that, the disease will have to be managed. The good news is if you don’t have gum disease, there are simple ways you can help prevent it from developing.

Practicing good oral hygiene habits is of the utmost importance. This includes brushing your teeth for 2-minutes at least twice a day — preferably in the morning and before bed. Flossing at least once a day is also recommended. The Mayo Clinic suggests flossing before you brush as this allows you to clean away any loosened food particles and bacteria.

Scheduling regular dental visits is also a critical part of preventing gum disease. You should visit your dentist every 6- to 12-months for a thorough cleaning and check-up. At your next visit, talk to your dentist about your risk of gum disease and what you can do to prevent it. 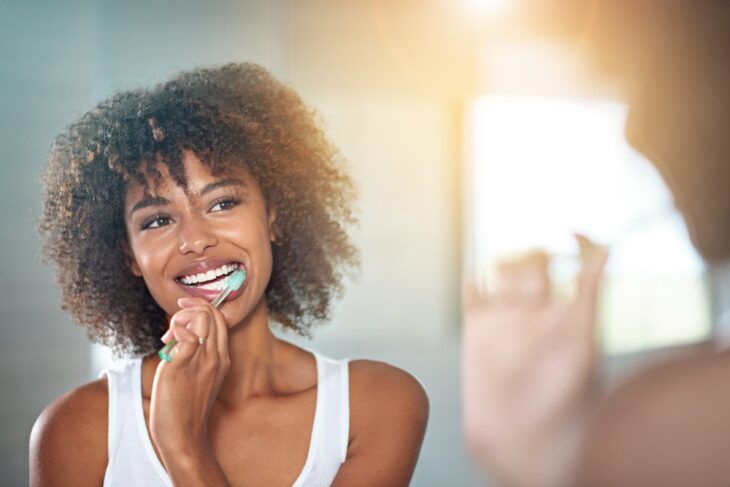