Transformations Actors Made for a Role 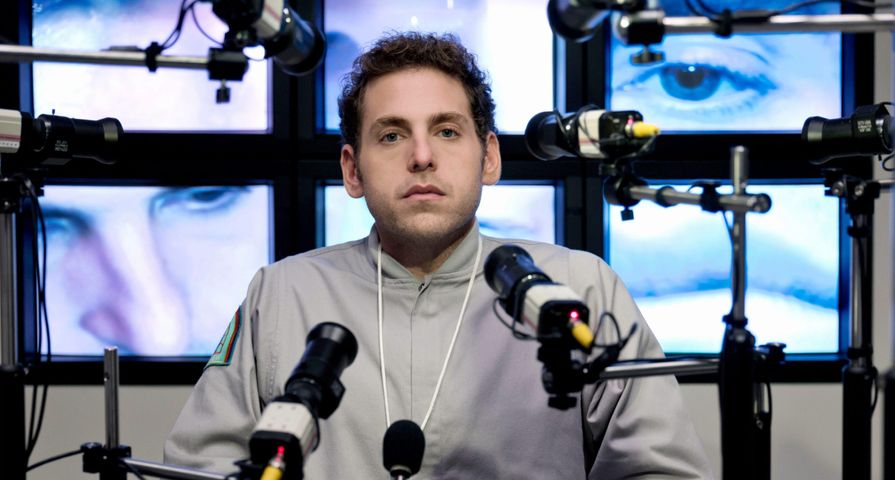 Acting is about more than just learning lines and performing them in front of the camera. The most talented actors and best performances for audiences to watch are when an actor or actress really dedicates themselves to the role not only mentally, but also physically.

We’ve seen it done time and time again. Actors and actresses either dramatically gain or lose weight in order to play a specific role and better represent the character. This list contains some of the most interesting transformations of all time. Check it out…

Christian Bale is no stranger to dramatic transformations. He’s done it several times for a movie role. Back in 2004 he dropped from 180-pounds to 120-pounds in order to play a factory worker struggle with an eating disorder in The Machinist. Not long after he went the opposite route and bulked up to play Batman in 2008’s The Dark Knight.

His latest transformation was for the 2018 biopic Vice during which Christian Bale played former Vice President Dick Cheney. “I had more fun gaining the weight than losing it,” joked Bale to Us Weekly. 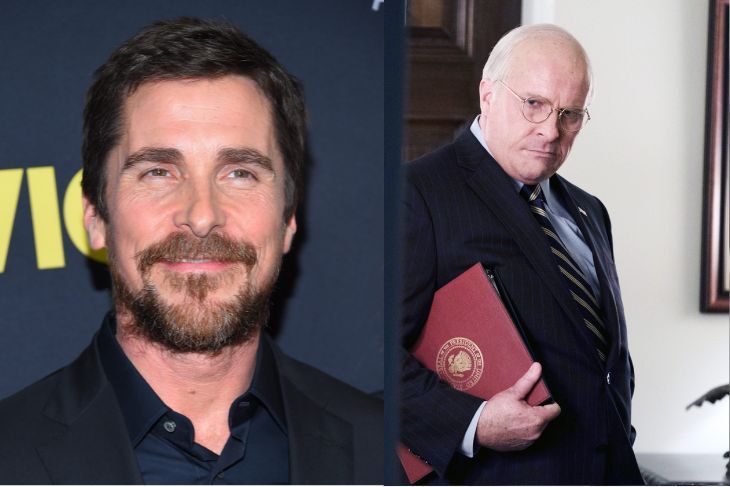 As if we needed another reason to swoon over this Australian actor, he went and played the role of Marvel superhero Thor. Obviously, it was a physically demanding role and he had to look the part so Chris Hemsworth started clocking in some serious hours at the gym.

He told TRAIN magazine that he would train six days a week for about an hour each day. While it was a dramatic transformation, he had a good foundation to work off of because he works out regularly even when he’s not playing the role. He was able to bulk up his normally lean physique by eating more and focusing only on muscle building exercises. 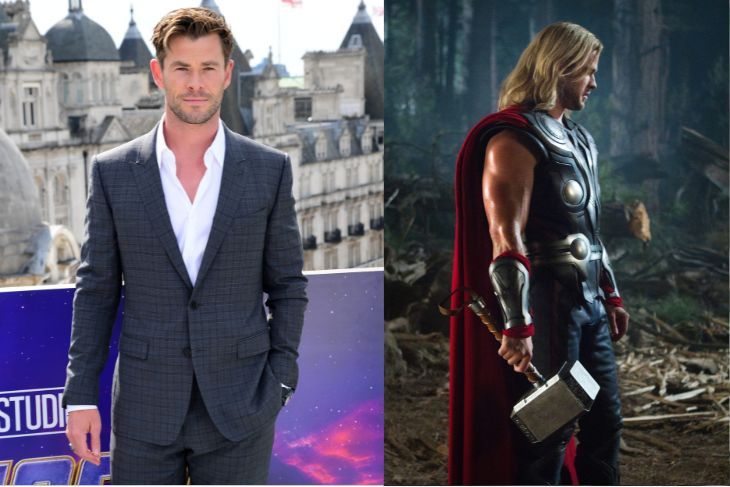 Charlize Theron earned her Best Actress Oscar for her role as the infamous Aileen Wuornos in Monster. She gained a whopping 30-pounds while prepping for this role and then wore prosthetic teeth and a cellophane-thin strip of plastic on her eyelids.

According to Foods for Better Health, Theron didn’t follow any particular diet. She just didn’t say ‘no’ to anything like donuts or potato chips. She also strayed from her usual exercise regime by not working out at all for three months. 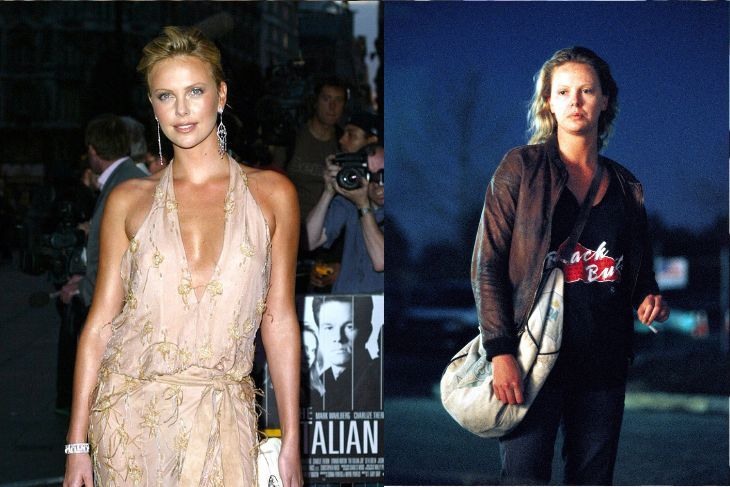 In order to land his Oscar-winning role in 2013 Dallas Buyers Club, Matthew McConaughey ate nothing but fish, egg whites, tapioca pudding, and drank as much wine as he wanted. This unsuual diet led him to lose 50-pounds so that he could portray Ron Woodroof, a man diagnosed with stage 4 HIV/AIDS in the mid-1980s.

McConaughey told Joe Rogan during an interview that he didn’t torture himself to prep for the role. He just felt it was his responsibility to pay homage to Woodroof’s life and legacy as accurately as possible. 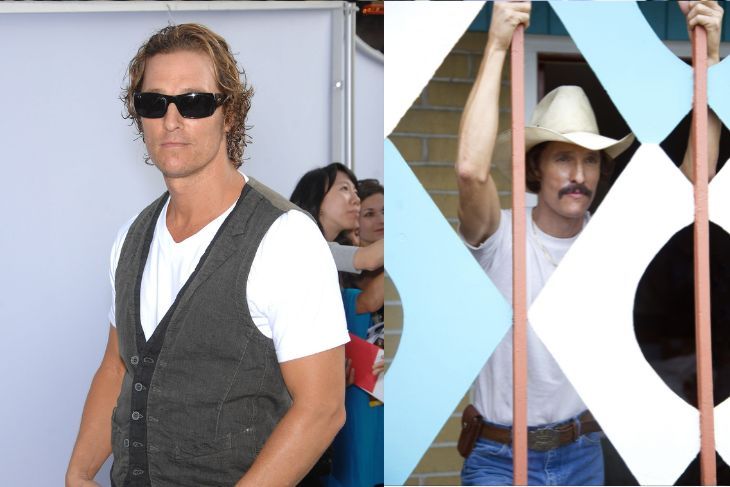 The Guardians of the Galaxy actor has been rocking a fit physique for quite some time now that people often forget he didn’t always look like that! Prior to getting that role he was about 60-pounds heavier, but he shed that extra weight in about six months to audition for the Marvel movie.

He told Men’s Journal he was able to accomplish this look with “three or four hours a day of just consistent, a– kicking hard work.” He credits his success to his brother, and working with personal trainer Duffy Gaver and nutritionist Phil Goglia. 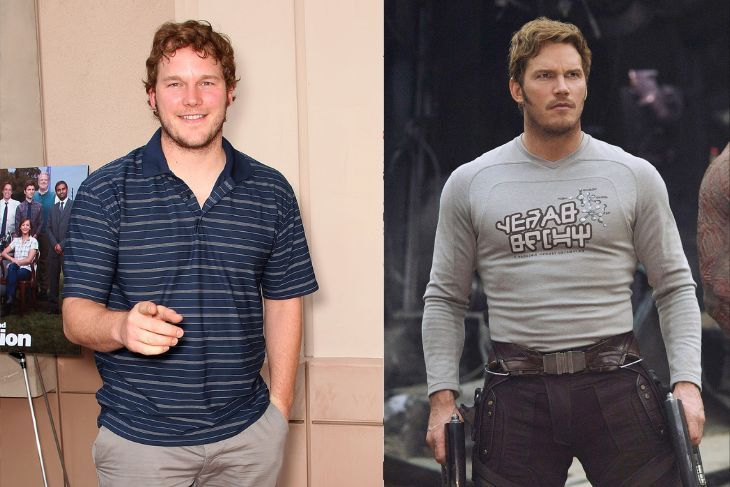 Another Oscar-winning actress is Hilary Swank. She won in the Best Actress category for her role in the 2004 film Million Dollar Baby. And she deserved it! She played the role of a professional boxer which meant she also had to look the part.

In an interview with MovieWeb, she said she not only had to learn how to box so that she could fake it on-screen, she also went through an intense training program over the course of 90 days. “My training was two and a half hours of boxing and approximately an hour and a half to two hours lifting weights every day, six days a week,” says Swank. 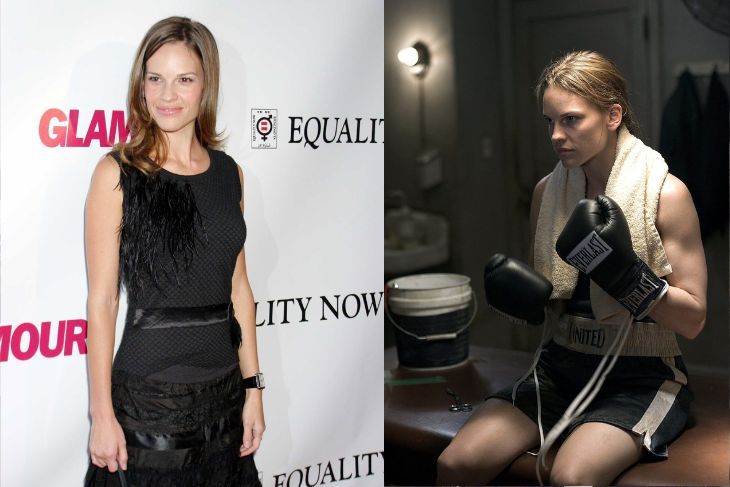 Tom Hardy is another actor who’s known for really diving into each and every character he portrays, both mentally and physically. One of his biggest transformations to date has been for the role of Michael Gordon Peterson, also known as Charles Bronson, in the 2008 movie titled Bronson. The character is recognized as the “most dangerous prisoner in Britain,” so Hardy spent a lot of time visiting jail and speaking with the real Bronson in order to prep.

As for his physical appearance, Hardy bulked up quite significantly by adding 40-pounds. He told Men’s Journal he was adding about 7-pounds a week and a lot of it was done through food. He also did a very specific kind of training so that he could bulk up and build muscle, but not appear toned. “I needed to put a layer of fat on my body, because Bronson when he was younger was a big guy, a brawler,” says Hardy to the source. 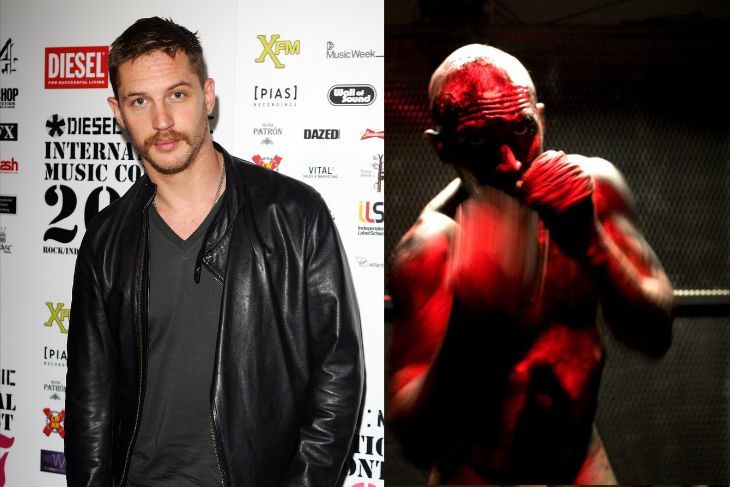 There is something so lovable about the Bridget Jones movies. They have gone down in history as a cult classic and just one of those rom-coms we always go back to. In order to play the clumsy main character, Bridget, Zellweger had to gain 30-pounds, according to CBS News. The first film was such a hit that after losing all the weight, she then had to do it all over again in 2004 for Bridget Jones: Edge of Reason.

The actress went from a size two to a size 14 by eating all kinds of unhealthy foods like French toast, pizza, chocolate, and milkshakes. She told Marie Claire U.K. that the weight gain started giving her panic attacks when she thought about the effect it might have on her health in the long run. 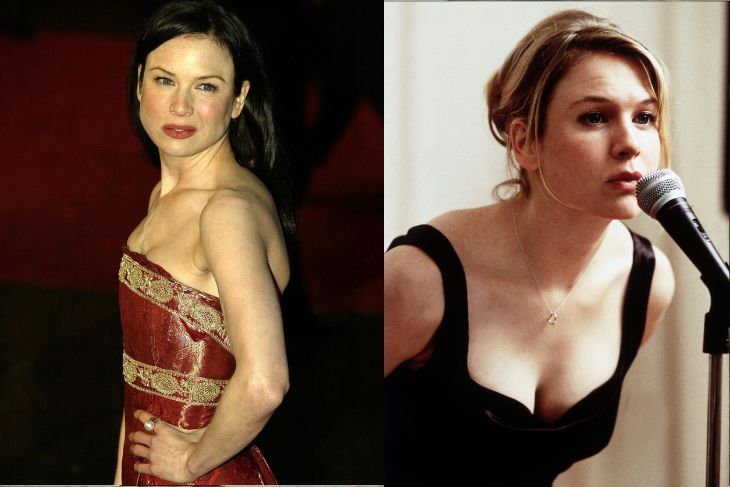 Jared Leto is another actor who is well known for being extremely dedicated to his craft and undergoing many transformations throughout his career. In the movie Chapter 27, Leto plays a mentally disturbed man, Mark David Chapman. This was the person who assassinated John Lennon.

According to Collider, Leto put on a whopping 67-pounds. The article also writes that rumors were swirling around afterwards that this immense weight gain took such a toll on his body that by the end of filming he could barely walk on set. 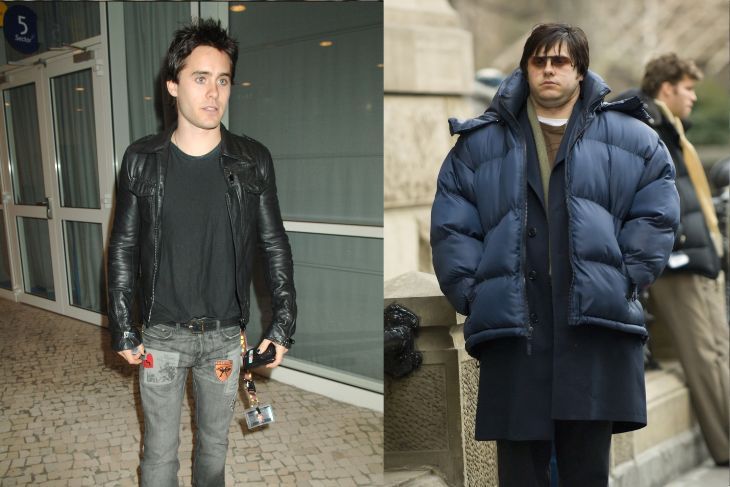 Comedic actor Jonah Hill has fluctuated somewhat over the past several years, from being lean to full-figured. He slimmed down in 2014 to film 22 Jump Street, but then gained weight again for his role in War Dogs in 2016. In this role he played a character based off the real-life person, Efraim Diveroli.

The biggest change by far occurred in 2017 while filming Netflix’s Maniac. Since then he’s managed to maintain a slimmer physique, but nothing was quite as dramatic as this transition in such a short period of time! 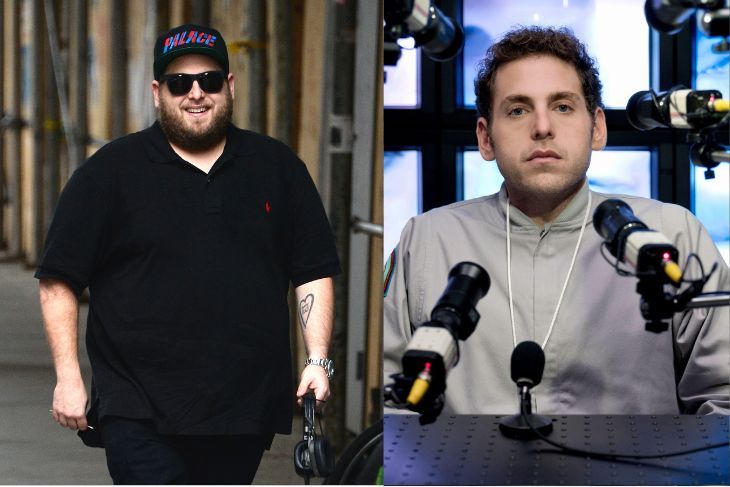 This actress went all out for her role as Lieutenant Jordan O’Neil, the first former Navy SEAL. Her role was in the now iconic movie, G.I. Jane. Not surprisingly, in order to portray a Navy SEAL on-screen, off-screen Demi Moore underwent real Navy SEAL training. She had a very regimented diet and her exercise routine included a lot of cardio, strength training, and some martial arts.

According to Popworkouts, she would start her workout at 4:00 AM so that she could workout before filming even started. At the time she was living in New York City and hired multiple security guards to run with her in Central Park. 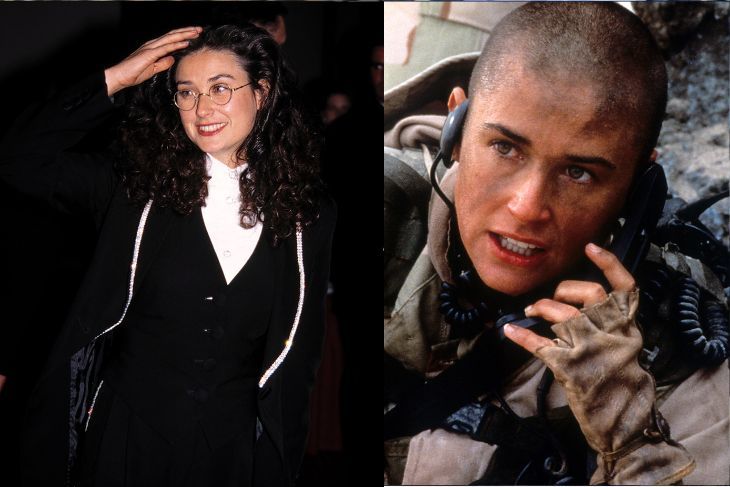 Anne Hathaway has been awing us on-screen now for decades, but one of her best performances still to this day was in the big-screen adaptation of Les Miserables as Fantine. She earned an Oscar for this role and rightfully so! To play the young orphan she lost 25-pounds. It might not seem like a lot, but Hathaway is already a slight woman.

During her interview with People’s editor-in-chief Jess Cagle, Hathaway admitted she wasn’t in a good place during filming. “I’d lost an unhealthy amount of weight in two weeks,” she said. “I didn’t know anything about nutrition. I taxed my body, and my brain bore the brunt of it for a while.” 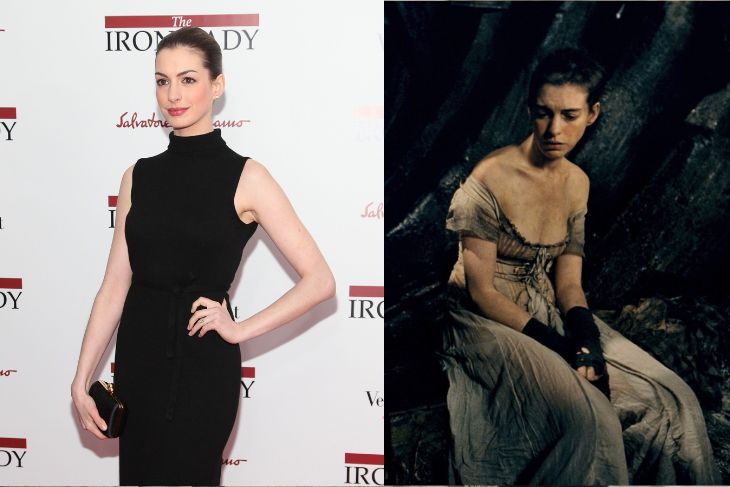