Rare Pictures of Prince William You Haven’t Seen Before 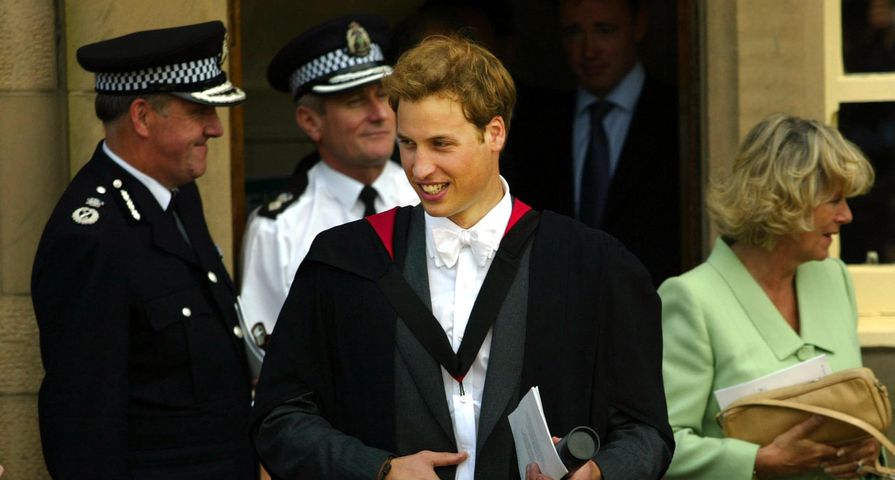 Prince William has led a life in the spotlight since he was a young boy, and many of his key moments have been captured in photographs at events and official royal appearances. While some photos of the Duke of Cambridge are iconic, there are still a number of photos of the royal that many fans have never seen. From candid moments with his brother, to behind-the-scenes shots during royal tours, or special moments with his children, follow along for our roundup of some rare photos of the Duke of Cambridge that you likely haven’t seen before.

Back in 2010, young brothers Prince William and prince Harry were photographed with a rock python wrapped around their neck during a a visit to the Mokolodi Nature Reserve in Gabarone, Botswana. The candid photo perfectly captures the hilarious brother dynamic as the two smile wide and Prince Harry jokingly holds the snake up to Prince William’s face. The brothers were in their late 20s at the time and rocked matching Tusk sweatshirts for the candid photo moment. 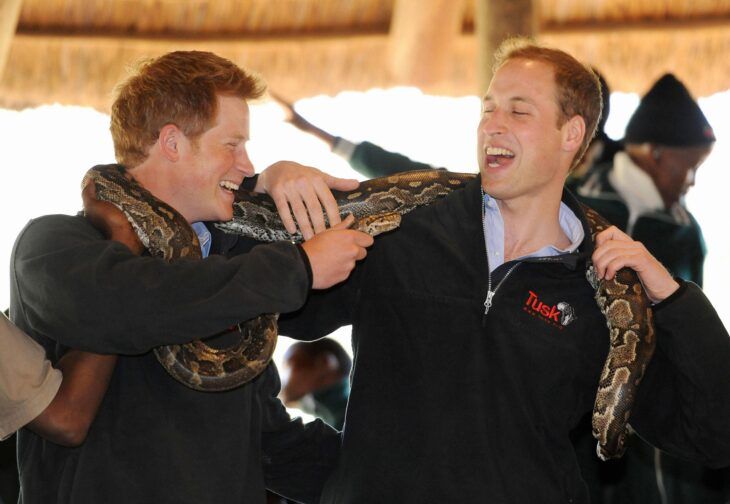 In 2008, the Duke of Cambridge was photographed alongside the Prince of Wales at RAF Cranwell, Lincolnshire. The candid photo shows a special moment after Prince William received his RAF wings from his father at a graduation ceremony at RAF Cranwell. The two are captured smiling happily in the distance as they share the important moment together. William received his wings  after completing a four-month course where he was trained to fly helicopters and propeller planes. 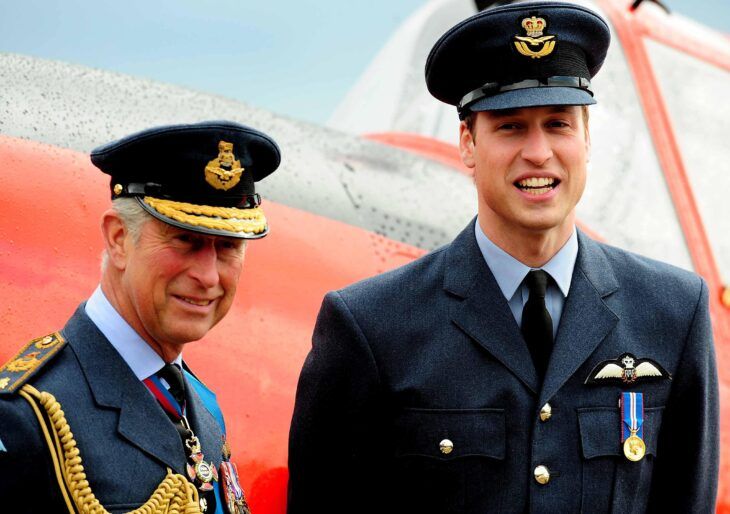 While the Duke of Cambridge is typically always photo-ready, this shot from his St. Andrews graduation in 2005 is clearly candid. The special moment shows William smiling happily to himself as he departs the St. Andrews police station following his graduation ceremony. The now Duchess of Cambridge also graduated from St Andrew’s University on the same day. Prince William received a 2:1 in Geography and Kate collected a 2:1 in History of Art after studying at the school from 2001 to 2005. 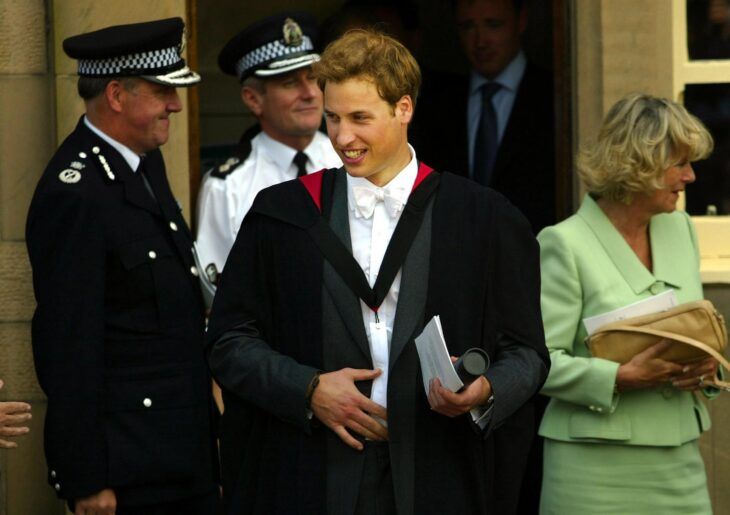 In 1991, a young Prince William was captured on board the Maid of the Mist in Niagara Falls, Canada with his family. He was nine-years-old at the time and is photographed here taking in the sights alongside his brother Prince Harry, 7, and his late mother Diana, the Princess of Wales. The group looks happy smiling together in this special moment and taking in the beautiful sights of Niagara Falls in their blue rain gear. 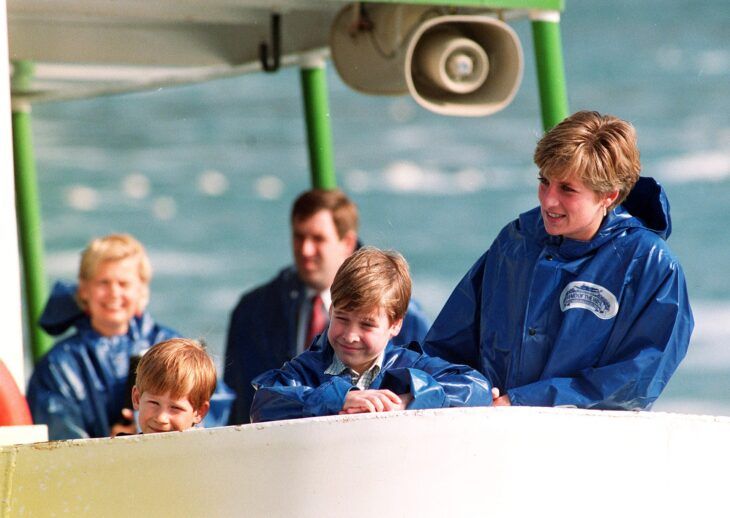 In May 2022, the Duke of Cambridge took a solo visit to Sports Key at Doug Ellis Sports Centre in Birmingham, England. The organization provides activities to the community to improve the wellbeing, community and life opportunities of disadvantaged young people. He is photographed here sharing a happy moment playing badminton on the courts.  William spent the day chatting with members on how they got into sport, and how it benefits them and the community. 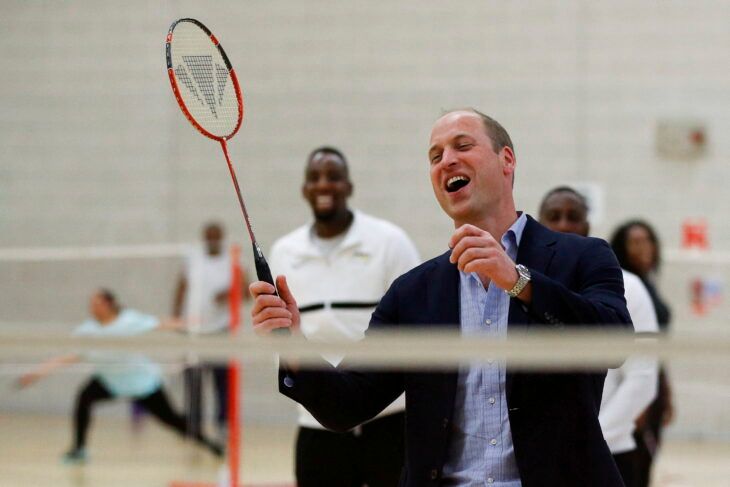 In July 2022, Prince William was photographed sharing an intense moment with son Prince George. The duo were sitting in the Royal box on day fourteen of the Wimbledon tennis championships in London. The match was the final of the men’s singles between Serbia’s Novak Djokovic and Australia’s Nick Kyrgios. It looks like the Duke of Cambridge and his son are talking strategy by the looks of William’s hand motions while the match played out in front of them! 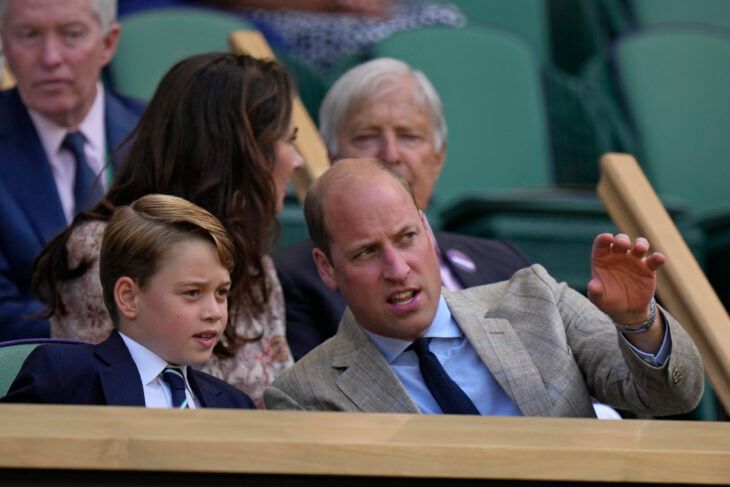 In July 2004, Prince William was photographed with brother Harry. In the candid moment, Prince Harry is seen patting his brothers back and shaking his hand to congratulate him for completing the Sport Relief London Mile. Prince William completed the mile in six minutes and 10 seconds. Prince Harry, unfortunately, was not able to participate in the event due to a knee injury during training. The event was intended to relieve poverty and help disadvantaged people in both the UK and around the globe. 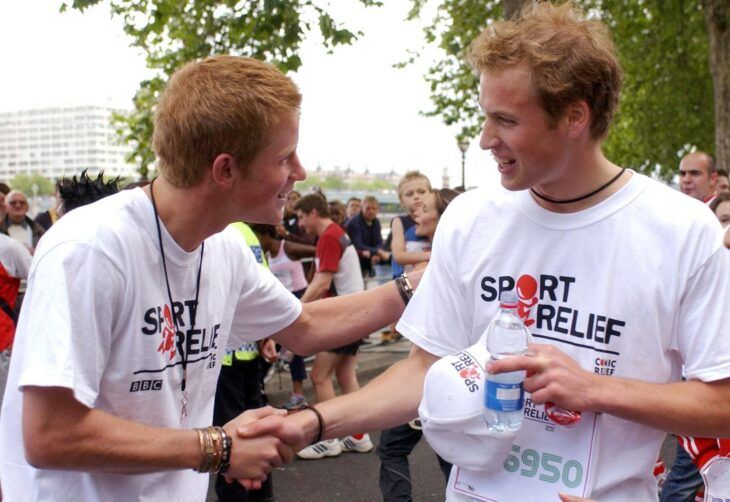 6. Gloucestershire Festival of Polo in June 2018

The Duke of Cambridge was photographed in a candid moment in June 2018 while playing Polo at the Gloucestershire Festival of Polo at the Beaufort Club. He is caught in an intense moment during the game, and had his family watching from the stands for a fun summer day out. The Cambridge family appeared happy and relaxed as they watched their father participate in the charity event from the stands. 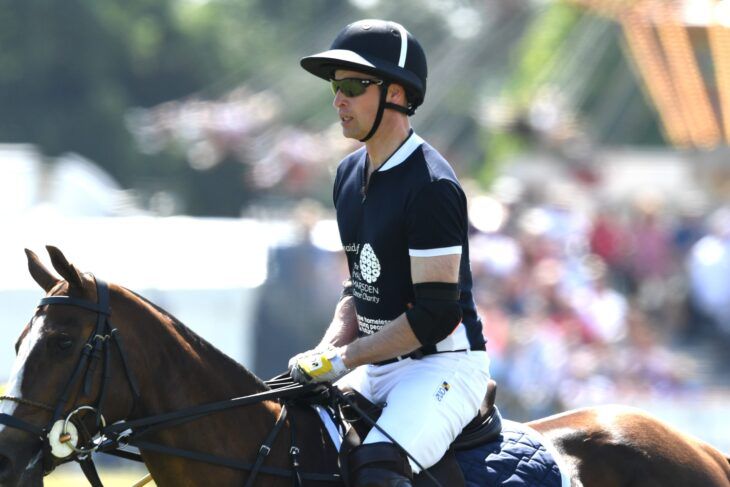 In 1991, Prince William was photographed with his younger brother Prince Harry during a week-long tour in Canada with their parents, The Prince and Princess of Wales. In this photo, the brother duo are wearing matching denim outfits and baseball-style caps which were given to them by the crew of the ship which is moored alongside the Royal Yacht Britannia on the Toronto waterfront.Prince William was 9-years-old at the time and Prince Harry was 7. 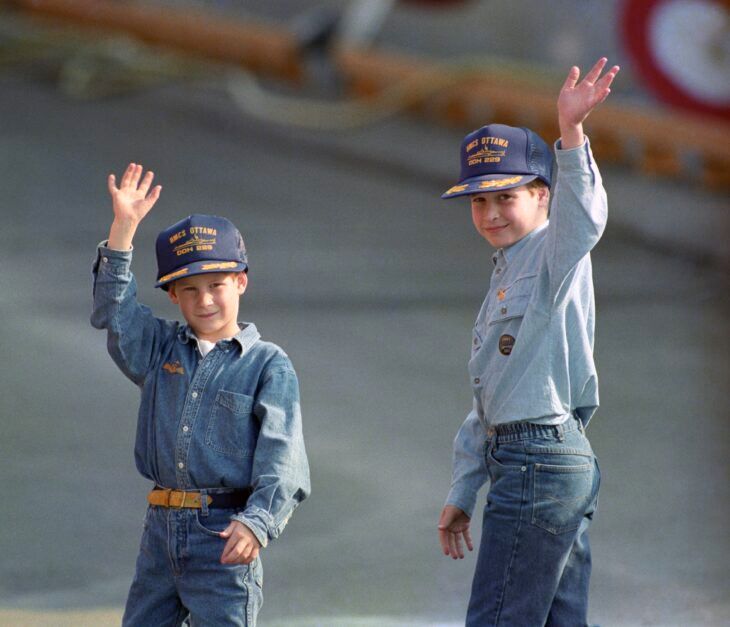 In October 2017, the Duke of Cambridge was photographed paying his respects while visiting Belgium. He and the Duchess of Cambridge visited Bedford House on a two-day visit to Belgium. In this photo, William solemnly placed a wreath during the New Zealand commemoration of the WWI Battle of Passchendaele at Tyne Cot cemetery in Zonnebeke, Belgium. In October 1917, the New Zealand division suffered many losses during the Third Battle of Ypres and pay tribute each year on the anniversary of the event. 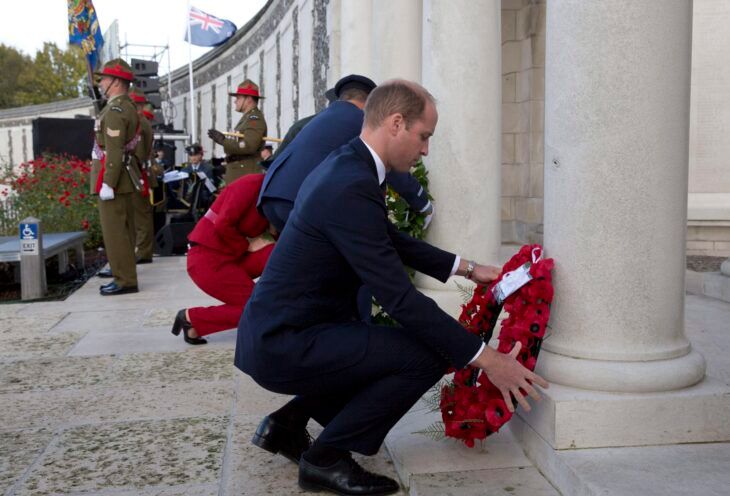 The Duke of Cambridge, Prince William, was photographed posing for a selfie with a fan during a walk from the Royal Palace to the Nobel Museum. He completed the walk with Catherine, Duchess of Cambridge, along with Prince Daniel and Crown Princess Victoria. The British Royal couple was in the midst of a two day official visit to Sweden. For the occasion, the couple bundled up in scarves and hats to greet and chat with locals. 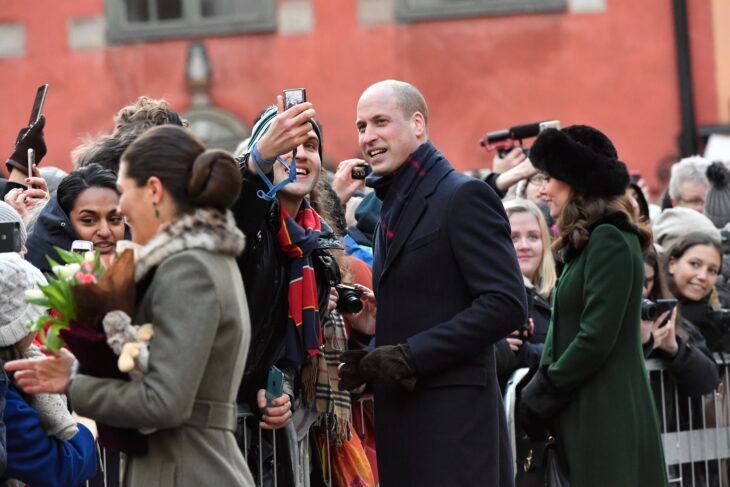 In October 2016, the Duke of Cambridge was photographed in a candid moment with the Duchess of Cambridge during their 8-day royal tour of Canada. In this photo, Prince William is seen pointing into the distance while speaking with Catherine as they sail on a tall ship in Victoria, B.C. The ship was operated by the Sail and Life Training Society, which teaches youth how to sail. The couple’s children also joined them for this tour, but were not in attendance for this particular event. 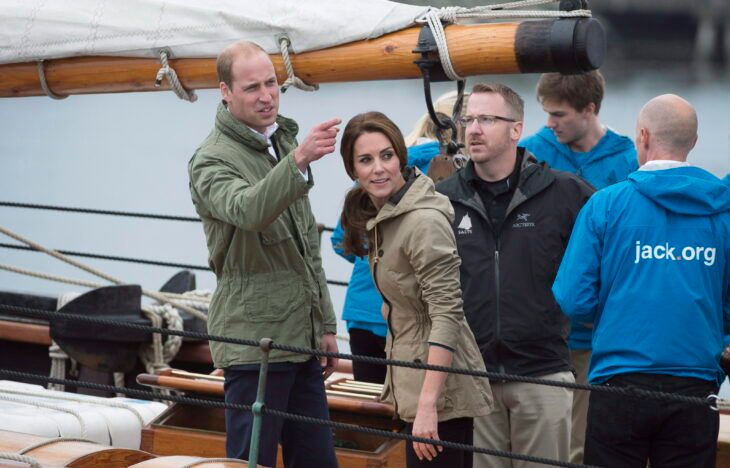 Back in 2007, Prince William paid a visit to the FA’s Hat-Trick Project at West Gate Community College Centre for Sport in Newcastle. In this photo, William is pictured in action as he kicks a ball across a field with members of the college. During the visit, the prince took part in a classroom discussion with primary school children and took part in a warm-up session. He also stayed to watch a five-a-side junior World Cup tournament and presented a Fair Play award. 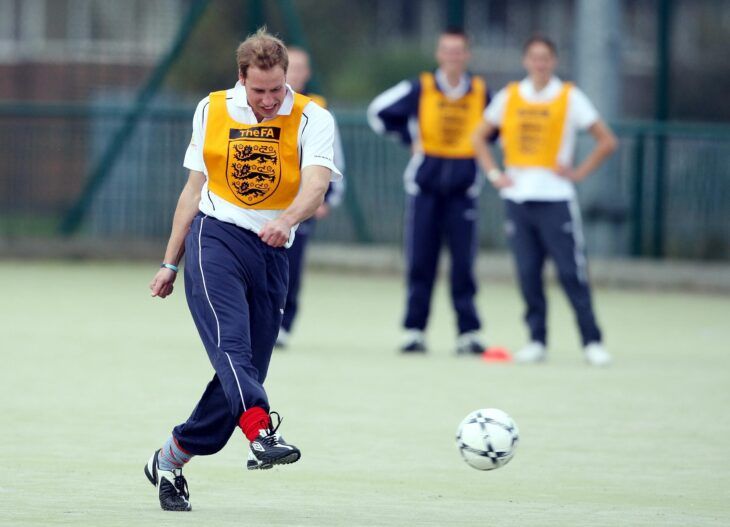