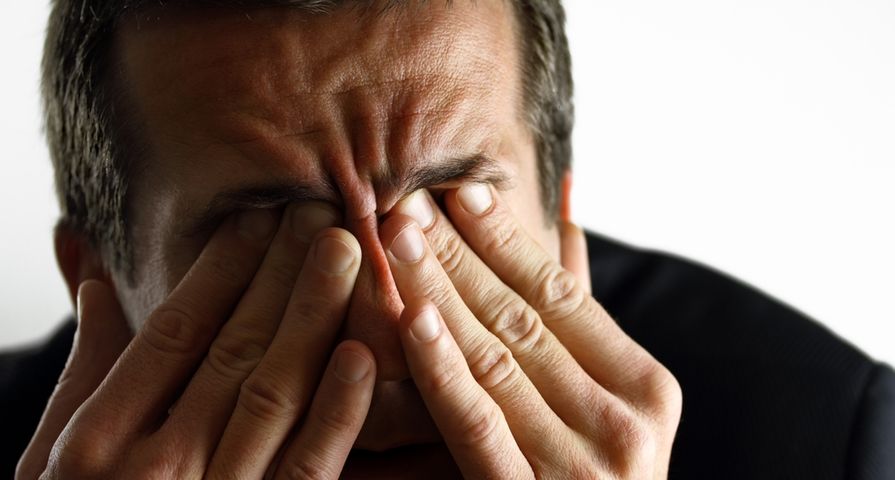 Hereditary hemorrhagic telangiectasia (HTT), also known as Osler-Weber-Rendu Syndrome, is a somewhat rare genetic disorder that affects the development of blood vessels. The disorder weakens the vessels because they lack capillaries that connect arteries to veins. Without capillaries and their important purpose, arterial blood goes directly to the veins at a higher speed and pressure than it should, causing bleeding and ruptured blood vessels. People with HTT suffer from a variety of symptoms that usually begin close to adolescence. The symptoms and impact of the condition is most severe for infants and can cause serious complications and even death.

Although there is no cure, if caught early there are effective treatments to minimize the impact of the condition. Read on for the ten signs of hereditary hemorrhagic telangiectasia…

Nose bleeds are the most common and very obvious sign of hereditary hemorrhagic telangiectasia because the nose is one of the main areas of the body that the condition affects. HHT causes abnormal blood vessels that don’t have capillaries to help control the movement of blood between arteries and veins. Capillaries have a vital role in your vascular system because they’re narrow and affect blood flow. The improperly developed blood vessels are weaker, putting those with the condition at risk of ruptures.

Since the nose is an area often affected by abnormal blood vessels as a result of HHT, nose bleeds are really common. In fact, most people with the condition experience mild to severe chronic nosebleeds, so monitoring the severity is important. There’s a scoring system people with Hereditary Hemorrhagic Telangiectasia can use that can help guide their treatment plan and keep their doctor aware of the condition. It’s also an indicator of how effective treatment is, making the results about the severity of the patient’s nosebleeds quite important.

In addition to both inside and outside of your nose, your lips, hands, face, and inside your mouth are the other common areas affected by HHT. These areas can develop red or purple dots that disappear or fade when touched but reappear quickly. The dots are telangiectasias, dilated blood vessels close to the skin’s surface. They’re very small, only about the size of a pin head. Like many signs of hereditary hemorrhagic telangiectasia, the spots show up later in life, around the 30s and 40s. As those with hereditary hemorrhagic telangiectasia get older, more and more spots usually show up.

The good news is, these red spots don’t typically bleed (other than in the nose). They’re an unfortunate result of HHT that those with the condition don’t like the look of, but treatment isn’t guaranteed to remove or prevent them. Although most people with HHT end up developing red or purple dots, the amount and how deep the color is ranges from person to person.

Not everyone experiences severe symptoms of anemia, but simple blood tests show deficiencies, including anemia. Although supplements and dietary changes may help increase your iron levels, if you experience other unexplained signs and symptoms, it’s worth talking to your doctor to make sure they haven’t missed something. Anemia can happen on its own without an underlying cause but it is also sign of HTT. Low iron and several other symptoms of HTT can usually be managed and treated fairly easily.

Another sign you may have telangiectasia in the stomach or gastrointestinal system is when you have dark or bloody stool. The bleeding in these areas from the abnormal blood vessels goes through your digestive track, causing stool to be bloody or look tarry. You might expect to experience stomach or abdominal pain and discomfort and therefore not consider the change in your stool serious, but telangiectasia in the gastrointestinal system isn’t painful. And just because something doesn’t hurt doesn’t mean it’s not serious.

Not everyone with HTT experiences dark or bloody stool, and the severity of this symptom ranges from mild to severe, and everyone develops signs and symptoms in different ways than others. Since telangiectasia in the gastrointestinal system and stomach is common for people with HTT, tests should be done to find the cause. However, dark or bloody stool doesn’t mean you have hereditary hemorrhagic telangiectasia. There are many other causes, some of which include ulcers, Crohn’s Disease and colitis.

Being short of breath is scary and something that should be taken seriously. Obviously exercising and doing other rigorous activities could cause shortness of breath, but it’s also a sign of HTT. Properly developed and functioning blood vessels in your lungs play an important role in preventing bacteria and blood clots from entering your blood stream. Unfortunately, some people with hereditary hemorrhagic telangiectasia can develop abnormal blood vessels in their lungs, allowing things into the bloodstream that shouldn’t be there.

The lack of capillaries in blood vessels of people with HTT results in what’s called arteriovenous malformation (AVM), explaining the abnormal connection between arteries and veins. The most common large organ this happens in is the lung. AVMs in the lungs causes the blood that’s transferred between the arteries and veins to not get enough oxygen, ultimately causing shortness of breath. Going to your doctor is a good place to start if you experience breathing problems so you can be examined and tested based on all of the symptoms you have. However, if the shortness of breath is severe, you should seek emergency medical attention.

Tips for Working Out Longer and Harder

Chronic headaches and migraines are another sign of hereditary hemorrhagic telangiectasia, though they’re not nearly as common as some other symptoms. It’s easy to blame headaches and migraines on other things, like stress and diet, and you might not be overly worried if you get them because they don’t seem like a severe symptom and a lot of people suffer from them. There’s also many causes so it can be hard to diagnose the cause. But around 10-percent of people with HTT suffer from headaches, which suggests a serious complication as a result of the condition.

About 10-percent of people with HTT get headaches because of AVMs that have developed in the brain. Again, the lack of properly developed blood vessels is what leads to AVMs, negatively impacting the blood flow to the brain and resulting in pain in the form of headaches. A study, published by the British Association for the Study of Headache (BASH) Guidelines, showed a connection between an aura and migraines in HTT patients. AVMs in the brain are the most common, but headaches and migraines could come from telangiectases and aneurisms from hereditary hemorrhagic telangiectasia.

Leg swelling from HHT can be a result of the blood flow throughout being uncontrolled by the much-needed capillaries between veins and arteries. The blood flow is at a high pressure and is unfiltered, causing stress on the heart and ultimately cardiac failure. This stress then leads to leg swelling, among other things. Swelling and shortness of breath could occur at the same time, as their both signs of abnormal blood vessels that have developed in major organs.

There are a number of treatments available that treat the symptoms of hereditary hemorrhagic telangiectasia, including liver AVMs. Leg swelling is cause for concern in patients with HTT, but a hidden risk that you won’t always get a warning sign for is heart problems. When the liver function is disrupted by AVMs in those with HTT, it can affect your heart and potentially result in heart failure. In severe and fairly rare cases when the liver is affected in this way, a transplant may be necessary to save the person’s life.

Vision changes and problems are among one of many signs of hereditary hemorrhagic telangiectasia, and symptoms and developing new medical conditions and problems depend on where in the body the telangiectasia and AVMs are from HHT. Vision problems are quite rare, but can occur when AVMs have developed in the brain. Double vision and floaters have been documented as how patients describe the vision changes. The severity of floaters and other disruptions to eyesight because of HTT ranges in severity, and some people experience partial or complete vision loss in one (or both) eyes.

Severe and rare symptoms like this typically happen later in life after many other signs and symptoms have occurred during early adulthood to mid-life. On top of vision changes, there are other eye problems people with HTT can experience. It’s much more common to experience redness in the eye because of telangiectases that can develop on the inside of the eyelids.

Abdominal pain isn’t an early sign of HHT, but it can signify a serious issue and requires medical evaluation and treatment. Pain in the abdominal area in patients with HHT is caused by malformations in the liver, including cysts and blockage of bile ducts that can cause pain. A variety of scans and ultrasounds can be used in diagnosing what exactly is causing the pain, and the results of these tests guide the direction of treatment.

Only a small amount of people with hereditary hemorrhagic telangiectasia experience abdominal pain as a result of the condition, even though many have abnormalities in their liver. HHT is treated based on symptoms because there is no cure and the severity and impact of the condition greatly varies. There’s actually a large portion of HTT patients who have mild abnormalities who never feel or see serious signs. And if abdominal pain and other serious symptoms are not present, the patient won’t be treated.

Unfortunately, in severe cases HHT can affect many major organs and cause serious complications. Seizures are the result of cerebral (brain) AVMs, and only around 10-percent of those with hereditary hemorrhagic telangiectasia develop them. AVMs in the brain could cause other serious issues, including stroke, hemorrhaging, or even death. As discussed earlier in the article, cerebral (brain) AVMs can also cause headaches and migraines because of the pressure of blood flow through abnormal vessels.

Like many diseases, a lot of the serious symptoms and complications caused by HTT can be treated, but it’s best to catch them as early as possible to increase the chance of effective treatments, or even avoid a transplant. Paying attention to any new signs and symptoms, no matter how small or insignificant they may seem, is important. See your doctor to keep them informed of any changes to your health. Knowing what to look for from hereditary hemorrhagic telangiectasia could make a huge difference on your health.