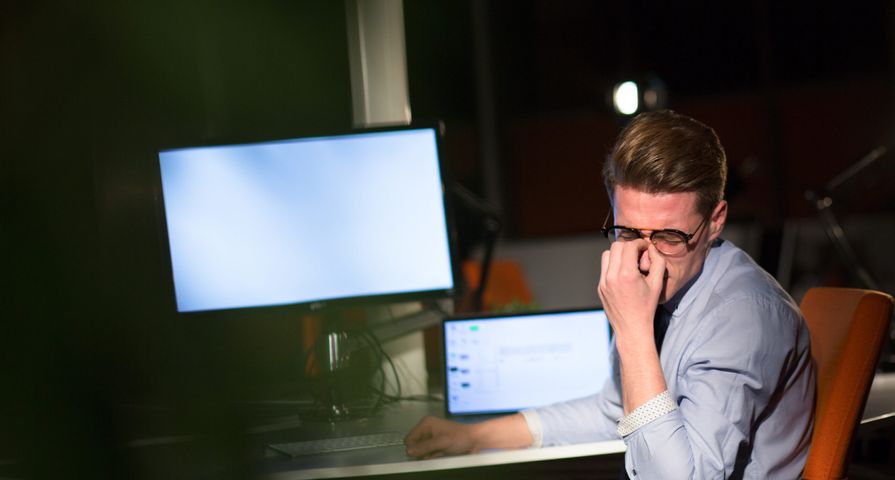 Do you ever feel like the light of your computer screen is burrowing into your eyes and making your head pulse? Or feel dizzy or nauseous after looking at your phone? While you might think these sensations are just eye strain or fatigue from looking at your screen for too long, they’re actually symptoms of a condition called cybersickness.

These issues may seem like a necessary evil with the rise of work from home, remote learning and days spent endlessly scrolling online. But I can assure you as a researcher in human computer interaction specializing in cybersickness that there are ways to anticipate and avoid feeling sick from your screens.

Cybersickness refers to a cluster of symptoms that occur in the absence of physical motion, similar to motion sickness. These symptoms fall into three categories: nausea, oculomotor issues and general disorientation. Oculomotor symptoms, like eye strain, fatigue and headaches, involve overworking the nerve that controls eye movement. Disorientation can manifest as dizziness and vertigo. And several cybersickness symptoms, such as difficulty concentrating and blurred vision, overlap categories. These issues can persist for hours and affect sleep quality.

People can experience symptoms of cybersickness through everyday devices like computers, phones and TV. For instance, Apple released a parallax effect on iPhone lock screens in 2013 that made the background image seem like it floated or shifted when a user moved their phone around, which many people found extremely uncomfortable. As it turns out, this was because it triggered cybersickness symptoms. Parallax scrolling on websites, where a background image remains static while foreground content moves as you scroll, can also elicit these symptoms.

There isn’t total agreement among researchers about why people experience cybersickness. One prevailing idea, sensory conflict theory, hypothesizes that it’s from a mismatch of information perceived by the parts of the body that regulate vision and balance. Your eyes receive information that tells them you’re moving even though your body isn’t. Everyday technology design can trigger this conflict between visual perception and physical experience.

Cybersickness in virtual and augmented reality

Cybersickness symptoms tend to be more intense with virtual reality and augmented reality.

VR refers to technology that entirely blocks your view of the real world and replaces it with an immersive, artificial environment. It’s widely commercially available through popular gaming platforms like Facebook’s Oculus devices and Sony PlayStation VR. VR can result in severe levels of nausea that increase with duration of use. This can make certain applications and games unusable for many individuals.

AR, on the other hand, overlays a simulated environment onto the real world. These could include head-mounted devices that still allow you to see what’s in front of you or something like Pokémon Go on your phone or tablet. AR tends toward more severe oculomotor strain.

Even if you haven’t used VR or AR devices before, chances are you will within the next 10 years. A rise in the popularity of AR and VR use will likely trigger a rise in cybersickness symptoms. Market research firm Research and Markets estimates that adoption of these technologies for work, education and entertainment may grow over 60% and reach over US$900 billion by 2027.

Cybersickness symptoms could be dangerous

While cybersickness symptoms may initially appear benign, they can have enduring effects lasting up to 24 hours after device use. This may not seem like a big deal at first. But these lingering symptoms could affect your ability to function in ways that could prove dangerous.

For instance, symptoms like severe headache, eye strain or dizziness could affect your coordination and attention. If these side effects persist while you’re operating a vehicle, it could lead to a car accident. It’s unclear whether the user, software company or some other party would be responsible for injuries potentially caused by device use and cybersickness symptoms.

Not much is currently known about how chronic cybersickness affects daily life. Just as there is extreme variability on who is more prone to motion sickness, with some up to 10,000 times more at risk, some people may be more prone to cybersickness than others. Evidence suggests that women, those who don’t play video games often and people with poor balance may experience more severe cybersickness.

If you are struggling with cybersickness symptoms because you’re using your computer or phone for longer periods, there are ways to help relieve the discomfort. Blue light glasses are designed to block out some of the blue light waves emitted by your device screen that can lead to eye strain and sleep irregularities. Zooming in on a screen or using larger font sizes may also help reduce eye strain and make daily work more sustainable.

If you’re interested in trying VR and AR applications but are prone to motion sickness, warning indicators, like Oculus Comfort Ratings, can help you know what to expect. Always make sure to visually calibrate devices so your eyes are as comfortable as possible, and use devices only in open spaces to minimize the risk of injury if you get dizzy and lose your balance. Take breaks if you start to feel any discomfort.

The work-from-home movement has grown as a result of the COVID-19 pandemic. Many people have replaced 9-to-5’s and commutes with sweatpants, bedhead and Zoom meetings. Though the convenience is undeniable, it has also come with an increasing awareness of how difficult it can be to stare at a screen for 40-plus hours a week.

But don’t let cybersickness get you down. As researchers continue to find ways to mitigate and prevent cybersickness across all devices
people may one day be able to enjoy advancements in innovative technologies without feeling dizzy.
Angelica Jasper, PhD Candidate in Human Computer Interaction, Iowa State University

This article is republished from The Conversation under a Creative Commons license.