Reasons Why We’re Hot For Saunas 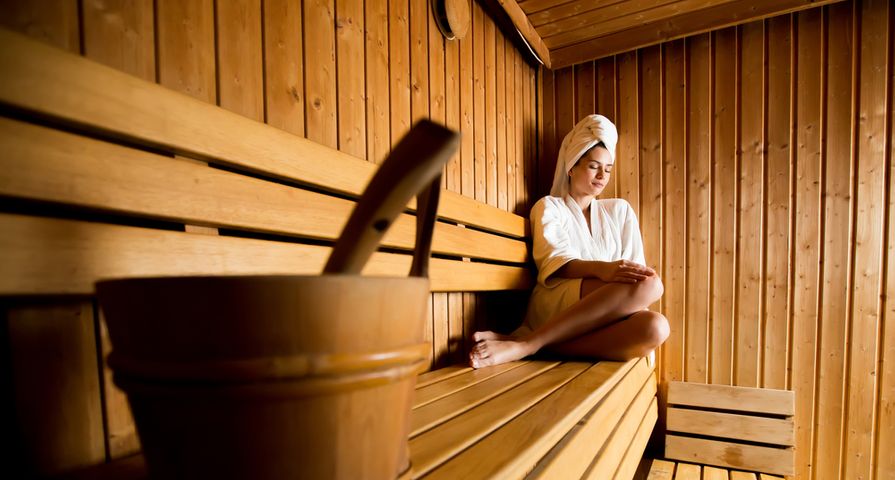 Do you take advantage of the sauna at your gym? Maybe you should, considering the multiple health benefits uncovered by a group of Finnish researchers at the University of Eastern Finland, in Kuopio. The study, which was published in JAMA Internal Medicine, monitored the sauna-going habits of a group of 2,315 middle-aged men and found that those who sauna-bathed regularly reduced their overall risk of cardiovascular disease by removing toxins, improving blood vessel function, and optimizing overall cardiovascular health.

So don’t be shy, grab a towel and make time for the sauna after your workout to enjoy these six health benefits…

1. Reduce Your Risk of Heart Disease

If you enjoy a relaxing, post-workout sweat, you can thank the above mentioned Finnish study. The researchers linked regular sauna going to a reduced risk of cardiovascular death—specifically from coronary heart disease, heart attack, or related cardiovascular illness.

Specifically, those men who enjoyed time in a sauna approximately 2 to 3 times per week reduced their chances of heart-related death by about 27-percent. And, the risk was even greater for daily (or 7 times per week) sauna-goers who reduced their risk of heart disease by 50-perecent—versus men who visited the sauna only once each week.

Findings from the same study also found that regular sauna therapy extended longevity from almost any illness or disease, in addition to cardiac-related death (i.e., heart attack and coronary heart disease). During the 20-year study period, researchers noted a 40-percent reduction in premature death for those men who enjoyed a sauna daily (meaning 7 times weekly) versus those men who only popped into the sauna to bathe once per week.

Keep in mind that researchers noted that frequency (how often you go to the sauna) in addition to duration (how much time you spend in a sauna) also had an impact on your heart health and overall wellness. For instance, findings showed that those men who spent 19-minutes or longer in the sauna lowered their risk of unexpected cardiac death by roughly 52-percent versus sauna-goers who spent 11-minutes or less time in the sauna.

3. Sweat Out Those Toxins

Although many of us prefer not to sweat, perspiration has many health benefits—primarily, it cools the body down and it rids it of harmful waste products (i.e., environmental pollutants, man-made chemicals in water and air, solvents, pesticides, prescription drugs, and nicotine and alcohol).

According to research from Julian Whitaker, MD, who studied at Dartmouth College, Emory University and now works as the director of the Whitaker Wellness Institute, the average healthy adult expels roughly a quart of sweat daily via the eccrine glands. However, sauna bathing triggers the eccrine glands to secrete a quart of perspiration in a matter of just 15 minutes.

The aforementioned Finnish study explored the benefits of a Finnish-style sauna specifically—this refers to a high temperature, dry air sauna with humidity levels between 10- and 20-percent. The temperature of saunas in Finland is set between 80- and 100-degrees Celsius. This means the study did not explore the benefits of other types of saunas, hot yoga rooms, and steam rooms, but considers potential benefits there as well.

Misting or pouring water from a basin over the sauna hot rocks or heater is used to traditionally increase the humidity in Scandinavian saunas. Jari Laukkanen, study author, PhD, and cardiologist at the Institute of Public Health and Clinical Nutrition at the University of Eastern Finland, claims that “[Finnish saunas allow for] temperature regulation at optimal level by throwing of water on rocks.”

5. How Saunas Simulate the Effects of Exercise

Study author and cardiologist, Dr. Laukkanen, from the University of Eastern Finland’s Institute of Public Health and Clinical Nutrition, says the dry heat and humidity of the Scandinavian-style sauna mimics exercise as far as increased heart rate, heat stress (perspiration), and temperature increase.

Researchers at the University of Wisconsin-Madson School of Medicine and Public Health agree that sauna bathing has a similar effect to intense physical activity on the human body when it comes to heat stress. Sweating in a sauna after exercise soothes and relaxes muscles, externally induces sweating and expands or opens the blood vessels to optimize blood vessel function—which can be of particular benefit to patients with a history of cardiovascular disease.

Even though the study reported enhanced longevity among the group of male study participants, researchers are unsure if the heat, relaxation, or socialization aspect of sauna therapy had a greater affect on premature death rates.

The Finnish study concludes that sauna bathing is safe for healthy adults, in addition to those with cardiovascular issues (i.e., history of angina pectoris, heart failure, and myocardial infarction). However, a primary doctor’s approval is always imperative before sauna going for those with a history of cardiovascular disease or another health condition.

Several naturopathic studies indicate that perspiring in a sauna can reduce blood pressure. For instance,  Dr. Luke Fortney, assistant professor of family medicine at the University of Wisconsin School of Medicine and Public Health, recommends sauna therapy to his patients for multiple health reasons, including high blood pressure.