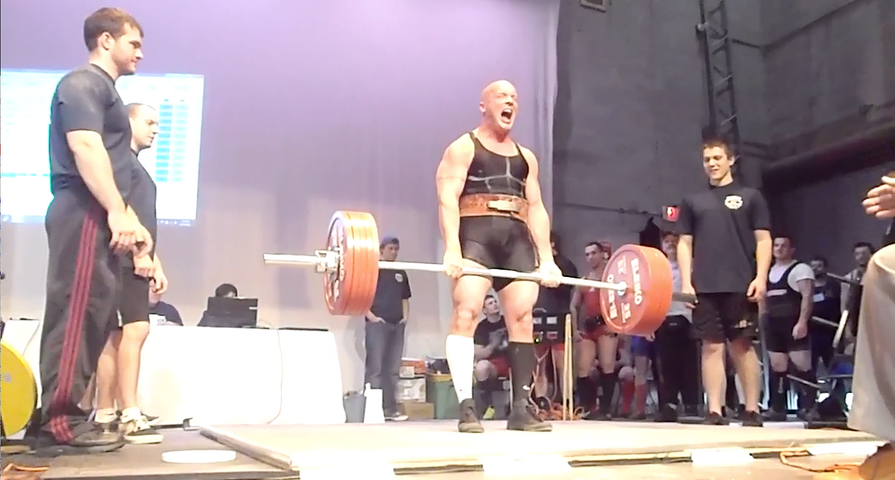 October 27th, 2012 was the day Boston hosted the World Championships of Powerlifting. For me, the month leading up to the competition was my first test. I had bulked up to 220 pounds during the summer time so I could have more mass to help me flip a car for a sick kids hospital fund raising event.

I had a team behind me who specialized in weight cutting for sport and, through disciple and hard work, I was able to shed a substantial 22 pounds in 28 days. It came down to the very day of the event waking up at 5:00am and sweating off the last few pounds in a sweat-suit. Still, I cleared my first hurdle of weighing-in at the 90KG (198 lbs) mark for my optimal weight class.

At the weighed-in I felt drained, dehydrated, and seeing the competition from around the World was an intimidating sight for soar eyes. All around me I could hear languages from across the Globe. Men built like bulls all in a line to hit the scale. I wondered if my opponents had as hard a time making their respective weight classes?

Powerlifting competitions go in the order of the Squat event, Bench-press event, and Deadlift event, with the highest of your 3 successful lifts in each event going towards your total. Your total weight lifted at the end of the 3 events determines your ranking.

The Squats started out with some heavy lifts. The Ukrainian Champion took the early lead, with the American Champion in second. The Ukrainian Champion was a former World Champion in Squats, and it showed here. I was in third place after the first attempts, and despite great efforts I was still in third place after the second attempts. I tried my best to close the gap before the Squat event was over, and I managed to be tied for second place.

The American Champion was not only the crowd’s home country man, but also the home town favorite as he hails from Boston. Motivated by the audience’s support he moved into the lead in the bench press event. For my part, I was surprisingly out benched by a few other lifters, but did manage to post a higher bench than the Ukrainian Champion. Still, I was behind both the Ukrainian and American Champions in our totals after 2 events.


In an attempt to close the gap between me and my rivals I launch on all out assault in the deadlift event, lifting as heavy as I ever have in my first two attempts. Going into the World Championships I was considered the best deadlifter of the field. I was confident I could out deadlift my opponents, and hoped to gain some ground in the rankings. However, the lead the American and Ukrainian Champions had gained in the two previous events was so great I found myself still in third place with only one deadlift attempt left in the competition.

My friend from the Canadian team broke down the situation and gave it to me bluntly, I could play it safe and go for a deadlift I had pulled before and take 3rd place, or I could go for 610.5 pounds and go for the Gold. I had tried 600 pounds just 2 months previous and could only manage to get it an inch off the floor. I was drained from a hard weight cut of 22 pounds and didn’t think I could possibly do it. In the end my goal was to get a medal, and bronze is a medal…

But a true Champion does not settle when victory is within his grasp. When victory is one lift away, you go for the opportunity, regardless if it means if you miss your lift you leave without a medal. I could play it safe and be assured a bronze, or I could risk it all to win.

I risked it all to win.

I am proud to tell all my supporters that I am now a World Champion. I hope any one reading this gets the message…Always go for the Gold, always believe in yourself, and never settle for less than the fantasy ending. I had promised my girlfriend’s dad I would win the World Championships and propose to his daughter. In my mind it was destiny, and I was going to make that final lift to win it all no matter how much weight it was. I wanted a day that our grand kids would recall in generations to come like a fairytale. The story ends, she said yes!

And they both lived happily ever after…

Check out the video of 6 Pack winning the event below:

As a boy he dreamed of growing up to be a superhero who helped people with his super strength like the characters he read about in comic books. As an adult, he has won several Powerlifting Championships (including the 2012 World Powerlifting Championship), broken Guinness World Records in weight lifting, and uses his skills to perform incredible feats of strength.